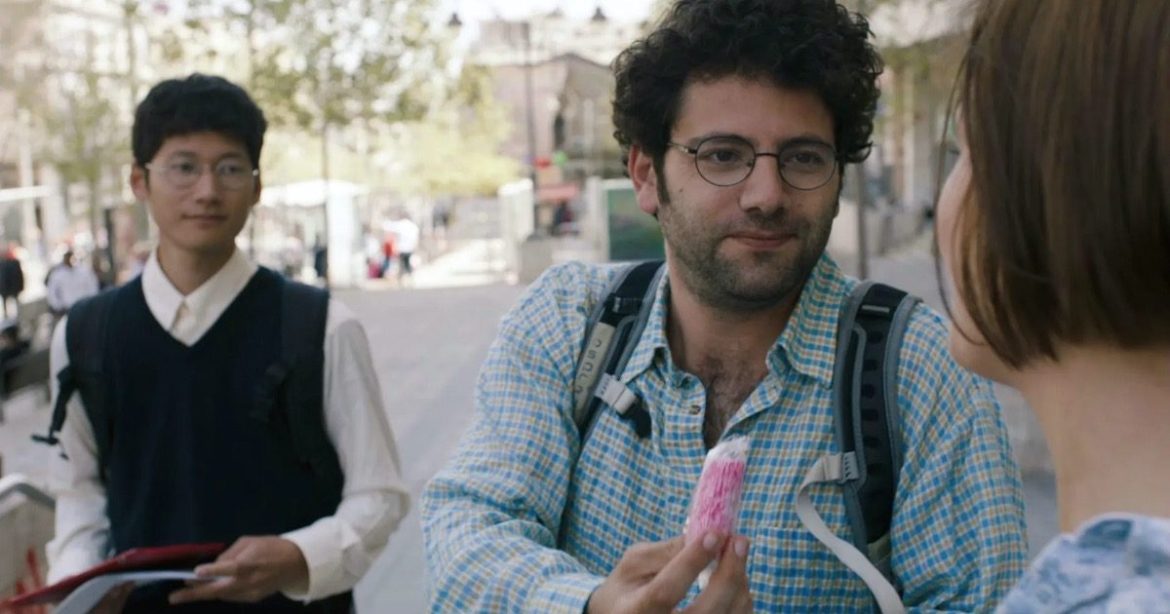 A man sits on a bench, wrapped in a coat he’s owned for years. He rests his feet at the head of Jaffa Street in Jerusalem.

A tour guide comes along, decked to the nines in state-of-the-art tour technology, leading a group behind her. She tells them about the vibrant nightlife, the lively markets, and the fun culture typical of a town center.

He stands and interrupts the tour.

And thus begins one of the more earnest and vulnerable debut projects I’ve seen in a while: Born In Jerusalem and Still Alive.

Yossi Atia writes, directs, and stars in this entry to the Jewish International Film Festival. The deeply personal story tells the story of a man (Atia’s Ronen) trying to work through his grief and trauma in the face of constant raining death. After the incident with the tour earlier, he decides to start his own tour of Jerusalem; The Tour of Terror. The idea is to give tourists a peak behind the curtain of sanitized, government-approved, half-informative-half-propaganda that tends to get peddled at tourists, and instead walk them through the Jerusalem he knows; a city battered by tragedy and so numb to death that there are distinctions between a “normal” bombing and a “special” one.

Although he refuses to accept payment for the tour, his family is shown to be struggling constantly. His father is suffering under an unnamed illness that requires constant care, and his roommate/best friend, Simon (Itamar Rose), is consistently neglectful to pay rent.

The film explores Ronen’s relationship with his home city, and the love and fear that are now inextricable from the other that he feels for Jerusalem. In one particularly startling scene, after giving a tour Ronen is sitting with a friend at a café when he sees two men walking towards them holding briefcases. Panic rises in his eyes, and he pulls his friend under the table to duck and cover. The two men walk by, and the two return to their coffees.

On one of his tours, he meets Asia (Lihi Kornowski), and the film begins to segue into more of a rom-com tone. Speaking of which…

The issues with Born In Jerusalem and Still Alive come from the fact that it isn’t entirely sure what it wants to be. Lihi Kornowski’s Asia, while well-acted, isn’t given enough to have a developed character beyond that of a stereotypical love interest. Part of this is due to the film’s abbreviated runtime; clocking in at a tight 80 minutes, the film does certainly fly by, but I would have gladly watched another 20-30 minutes if that meant we were allowed to see the relationship between Asia and Ronen get the space it needed to grow.

Indeed, most of the qualms I have with this feature are related to the short runtime. I feel as though I was cheated out of a much more interesting movie, a movie that was dangled in front of me by what was on screen, but ultimately did not fulfill some of the potential it flashed in the beginning.

Still though, I have very little to say negatively about this film. It was a charming and quirky exploration of one man’s journey through his own trauma, and the scars left not just on his soul, but also on his city. It allowed space for a different type of grief; not the grief of a loved one lost, but the grief over a sense of belonging and safety in a place that you love, and the fury that comes when those who want to paint a prettier picture pretend that that loss never happened at all.

I also want to take a moment and give a shoutout to the team behind the music. Baruch Ben-Itzhak, Marc Lazar, and Eli Lulai really did their part to bring the film together. The soundtrack was vaguely reminiscent of that of Midnight in Paris, but not in a way that was obnoxious. I found it quite charming, and hope to see the team working on more features in the future.

When my only true critique is that I wish we got to spend more time with the characters, that marks a well-made film. I highly recommend checking Born in Jerusalem and Still Alive if you get the chance.

Born in Jerusalem and Still Alive is playing February 14th through March 24th as part of the Jewish International Film Festival. For more information, visit the festival’s website.

Thanks for reading! What are your thoughts on Born in Jerusalem and Still Alive? Comment down below!

[…] tell you, the only thing worse than them happening in the first place is them happening, and the world never noticing them at […]

For Better or (Mostly) Worse, ‘The Kissing Booth...