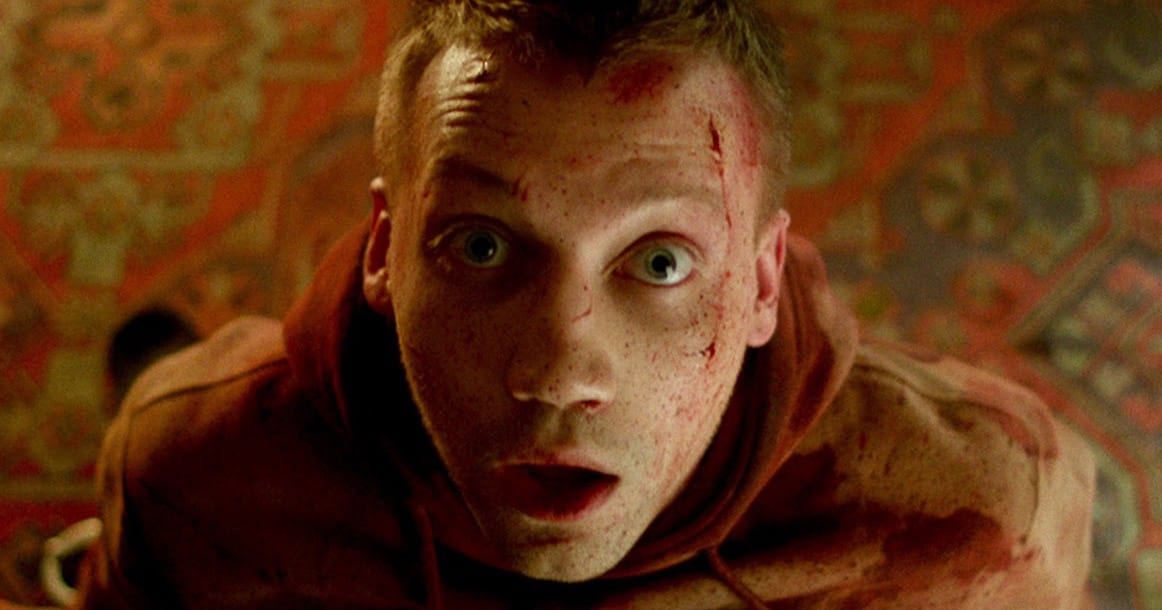 Why Don’t You Just Die! comes from writer/director Kirill Sokolov and tells the story of Matvey, a young man who has been tasked with murdering his girlfriend’s detective father, Andrey, by none other than his girlfriend.

Going into this film, I realized that I am quite unfamiliar with Russian cinema. I have seen a few of the big, popular films from the countries well-known creators, such as Elem Klimov’s devastating Come and See, but I have never really delved into the region’s lesser-known films. So, when I was handed the opportunity to watch Why Don’t You Just Die!, I thought to myself, “Why not?” and, unfortunately, I came out of it a little disappointed.

Sokolov kicks off Why Don’t You Just Die! with a bang. The opening scene of the film immediately draws you in with some intense, visual storytelling, that is then met with a jarring shift into something a little more comedic. Setting this tone early, Sokolov lets the audience know that they are in for a CRAZY ride. What follows is a hilarious scene full of hilarious stunt work, whacky camera movements, and a hilarious score; however, once the film’s main plot begins to unfold, the film takes a rather unusual turn, which didn’t quite work for me. After setting up the film with this hilarious opening scene, Sokolov begins to unfold the film’s plot by establishing the technique of expositional flashbacks, scattered throughout the film.

While I have no issue with this as a creative choice, I did find that, in the context of Why Don’t You Just Die!, it hindered the overall tone and pacing of the film slightly. The scenes set in the “present” were crisp, funny, and wholly entertaining — I found almost all of the flashbacks to be somewhat meandering to the overall story, and quite irrelevant. While I understand the goal of the flashback scenes, I found that they didn’t quite work in the long run, as most of these scenes were setting up characters or plot points that I, ultimately, did not care for.

The thing that Why Don’t You Just Die! struggled with the most was its lack of character development. Why Don’t You Die! is quite a contained, quick, and concise film that is supposed to be a fun breeze of a watch, but I couldn’t get on board due to my detachment from the main character, and all those around him. While everyone played the roles well, the writing was lacking in truly building them up as individuals.

For instance, we understand from the get-go that the main character, Matvey, is trying to kill his girlfriend’s Dad, and we know that she asked him to do it, but apart from that, we get no other real information about this character. The audience is never really given a chance to resonate with him or his situation. (Although I’d hope you wouldn’t understand the situation per se.) I understand that, for a film such as Why Don’t You Just Die!, this may come off as a nitpick; and I suppose it is, but I can’t help but get caught up by my disappointment in this aspect of the film. Sokolov spends so much time in these flashback scenes to try to build up character and motives, but he doesn’t quite stick the landing in that regard, which kind of sucks… 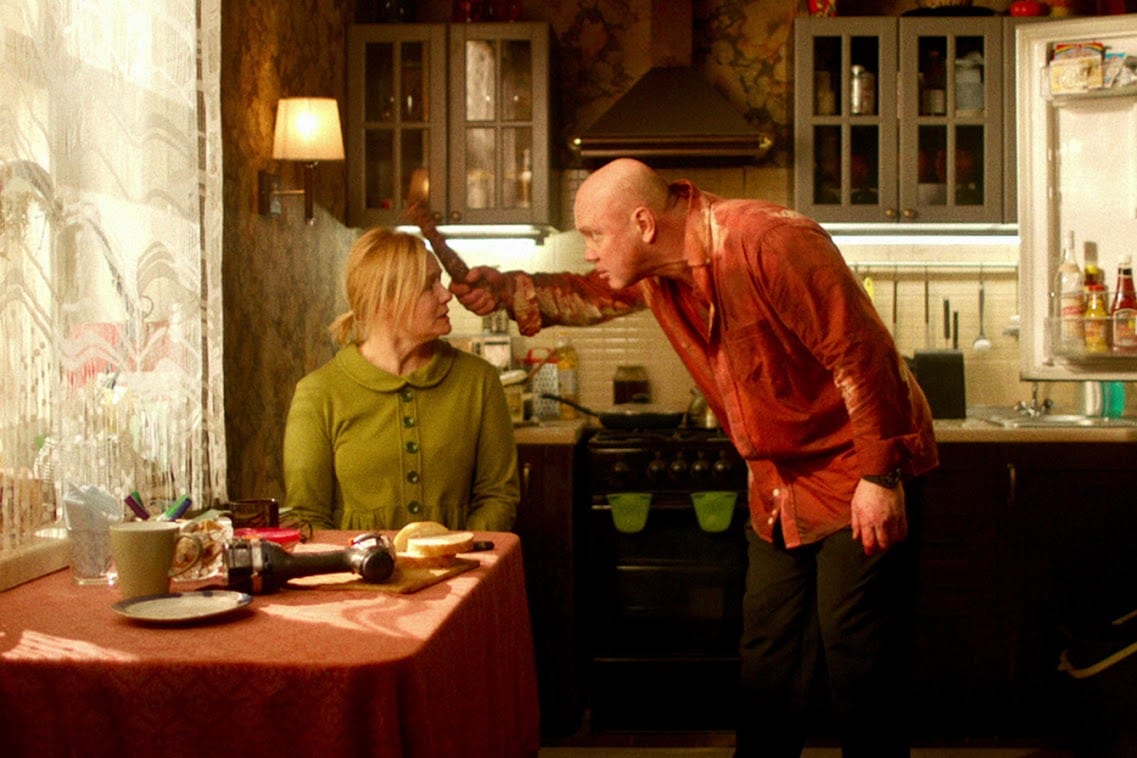 The Blood is the Life

The thing that I LOVE about Why Don’t You Just Die!, and easily its strongest trait, is its BATSHIT CRAZY action and stunt work; this is what carries the movie through all of its issues. It’s hyper-stylized violence, blood, and gore make for some hilarious beatdowns. From smashing someone with a TV to drilling into someone’s leg, this film has (pretty much) got it all!

At the center of it all though, is the camera and stunt work. From crazy camera rotations and crash zooms to brutal wirework, this Why Don’t You Just Die!’s action is among some of the most entertaining I have seen in a very long time; I just wish that I could have seen more of it.

The thing that I found so entertaining in this film, is subsequently one of its lesser attributes. While the blood and gore is fun to watch, its lack of screen time — while still rather prominent — is what really drew me out of the film. It’s over-focus on characters I did not care for, resulted in — for me at least — wasted time and potential.

Not Quite My Cup of Tea

Look. At the end of the day, I have to ask myself these 3 simple questions:

Did I have fun watching this film? Yes.

Did I think it was great? Unfortunately, no.

Would I watch it again? Probably. Yeah.

Where Why Don’t You Just Die! excels in its stunt work, camera work, and action, it fails at building characters I could care for or a story I could enjoy. Full of some, outright hilarious moments, Why Don’t You Just Die! contains enough entertainment for a Sunday afternoon, but does not carry enough weight for me to carry its memory through to Monday morning. I think that it’s a film that had a lot of potential, but dropped the ball slightly in an attempt to build something that it, ultimately, wasn’t going to be. Full of great performances, its lack of actual characters led to some disappointment in the film as a whole. However, it packed enough of a punch for me to have an enjoyable 90 minutes.

Thank you for reading! What are your thoughts on Why Don’t You Just Die!? Comment down below!

[…] the Novocherkassk massacre of 1962 is not one of these events in Western Russia, where the small city can be found. For the rest of the world, however, the events of that day are […]

[…] Watching Andrei Tarkovsky’s Stalker is like being transported to another dimension. With its extreme long takes and naturalistic feel, five minutes of runtime can feel like twenty, but twenty minutes of runtime can also feel like five. Rarely does one encounter such a mesmerizing, dreamlike experience — I guess that’s why many hail Stalker as one of the best Russian films. […]

I Tried Holding My Breath Underwater and Nearly...