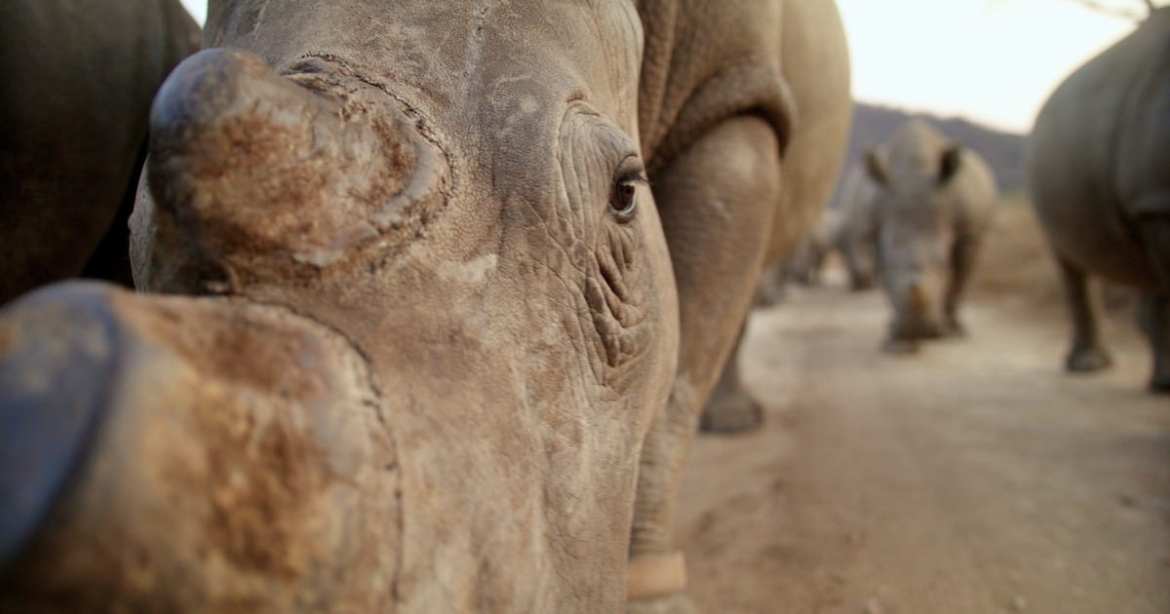 Nature documentaries often take a wonder-first approach to storytelling: the narration and cinematography are acutely focused on portraying the majesty of nature, the beauty of its subjects, and the stunning worlds that exist parallel to our own. If conservation and sustainability are themes in the story, they are not front and center — and they are conveyed with merely the message “if we don’t act, we will lose this world.” From the opening moments of The Last Horns of Africa, the story it wants to tell about the African rhino is clear: we are acting. And it may not be enough.

It’s a tale of two wars in South Africa, and Last Horns tells its story through the lens of these two battles that are intrinsically intertwined at their core by the rhino poaching epidemic. First, there is the story of the world’s largest rhino orphanage; its location a heavily guarded secret for fear of poachers, who would murder the staff and the animals alike for the horns within. Each day the orphanage fights to nurse rhino calves back to health, who had been left for dead by poachers looking for bigger prizes. Then, there is the frontline of the poaching war itself. Rangers in Kruger National Park prepare daily to defend a park the size of Israel from poachers, while a top-secret sting operation aims to use informants to take down two of the biggest names in African poaching of the past 30 years.

Equal parts thrilling and heartbreaking, but always captivating, The Last Horns of Africa shows you the ugly reality of conservation and the lengths that we have to go to save a critically endangered species.

Rangers who began their career as passionate park guides are now hardened soldiers in the war on poaching, unable to look forward at the future needs of their park because they have to remain hyper-vigilant to the threat of losing ground to criminal activity. Veterinarians have resorted to saving rhinos using the very thing that threatens their lives in the first place — de-horning — to devalue the rhinos for the poachers. And as these frontline heroes fight for the lives of the last few thousand black rhinos in Africa, a political discourse swirls about the region about if legalizing the trade of rhino horns around the world and humanely providing supply would eradicate the poaching market or further embolden the criminals.

While stylistically and visually offering nothing new to the documentary medium, the film offers a new story about an old crisis through sheer unprecedented access. It’s a gripping narrative that draws you in with an emotional connection to this devastated species and gives a face to the evil threatening their very existence. It’s not an easy watch, but it’s an urgent one. Global crises can often be too easily pushed out of mind when you aren’t being immediately impacted, and The Last Horns of Africa does an incredibly effective job placing the poaching epidemic and the plight of those species affected right front and center.

For more information on The Last Horns of Africa and other films playing at the Melbourne Documentary Film Festival, check out their website.

Thank you for reading! What are your thoughts on The Last Horns of Africa? Comment down below!