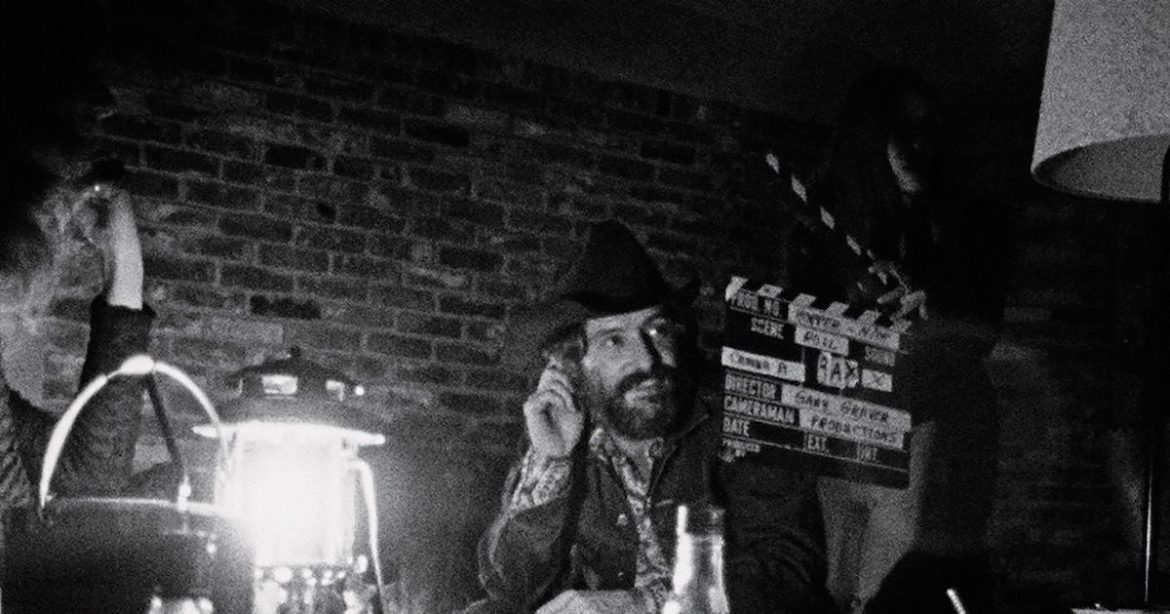 It was November of 1970. Dennis Hopper, hot off the success of his counterculture masterpiece Easy Rider and deep into post-production of his second feature, The Last Movie travels from Taos, New Mexico to Los Angeles to meet with cinematic titan, Orson Welles.

The two spend an evening conversing about everything from filmmaking, politics, religion, John Wayne, Elvis, Jane Fonda, and even Hopper’s own bizarre Oedipus complex. Welles filmed the conversation, initially intended to be used for his long-dormant film project The Other Side of the Wind. Five decades later, this epic tête-á-tête between these two trailblazing mavericks of cinema has been uncovered and restored for our viewing pleasure.

The cowboy-hat-wearing, beard-stroking Hopper appears in almost every frame while Welles is an ominous presence lurking in the darkness behind the camera with his commanding and powerful voice, his visage need not be seen. The handheld camerawork and editing is fittingly as loose and freewheeling as the conversation it captures, naturally drawn in by Hopper’s incredible magnetism as Welles tries to uncover more about his personal beliefs and ideologies that he is very hesitant to share on camera. He was labeled as a revolutionary in the wake of Easy Rider was even told by the FBI not to associate with leftist groups, so Hopper, while presenting himself as open and honest throughout the film is very careful not to openly endorse or align himself with any movements, despite Welles’ best efforts to break down this wall he has put up. This is shrouded in even murkier ambiguity as Welles assumes the role of Director Jack Hannaford (John Huston’s character from The Other Side of the Wind) at random points through their tipsy repartee, leaving us to wonder if these insistent interrogations into Hopper’s mind are coming from Welles or Hannaford.

The highlight of their conversation is of course their pontifications about cinema and their own ideologies about filmmaking. Hopper as the exciting newcomer leading the charge of the New Hollywood cinema and Welles as the aging icon trying to adapt to the times, two different generations of filmmaking clash with their discussions surrounding cinema. Cinephiles will get a kick out of Hopper gushing over the likes of Resnais and Buñuel and how he tried to watch Antonioni’s L’Aaventura seven times but always fell asleep. In terms of filmmaking, however, Hopper and Welles find common ground in their smug attitudes towards technical crew’s supposed lack of creative drive and their mutual disdain for editors, but they debate intriguing concepts like sacrificing artistry for emotion, is the role of a director the god or the magician or the poet and how Hopper doesn’t just want to preach to the converted but have audiences who will watch his films with an open mind, mentioning the differing reactions to the ending of Easy Rider in California and the South.

Though perhaps a little long-winded at 130 minutes, Hopper/Welles is endlessly engaging viewing that will have cinephiles salivating and aspiring filmmakers furiously taking notes. A candid, boozy conversation between two men whose masterful directorial debuts both changed American Cinema forever is as informative and as fascinating as the title promises.

For more information on Hopper/Welles and other films playing at the Melbourne International Film Festival, check out their website

Thank you for reading! What are your thoughts on Hopper/Welles? Comment down below!

‘Tommaso’ Loses Willem Dafoe in a Swell of...