How ‘Waterworld’ Became the Last Big Action Film of its Kind 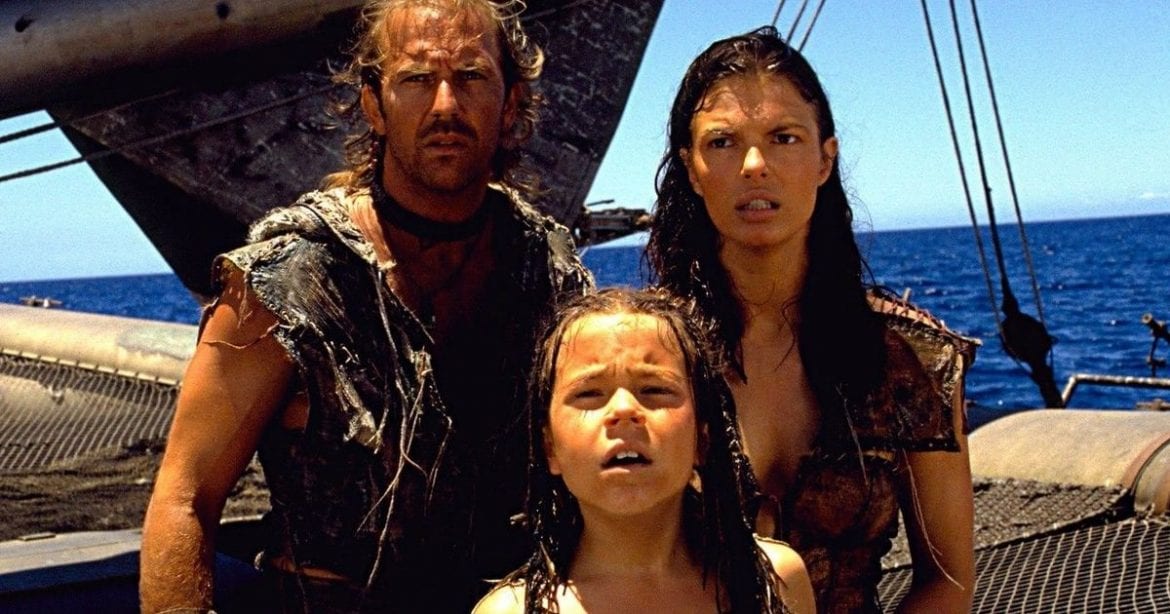 The murderous Deacon commands his troops of Smokers across the sea towards the Atoll, a floating island he believes protects the lost map to dry land. An army of jet skis soars across the water in a sympathy of bullets and flames as they attempt to gain access to the floating fortress.

Two huge ships then appear at Deacon’s command, these ships start to shift and morph into two large ramps. At another wave of his hand, water skiers come skimming across the water towards the ships being pulled by a small plane. All five skiers ride the ramp up and over the wall of the Atoll, landing safely on the other side of the walls. They all pop out of the water with guns beginning an immediate attack on the residents that thought they were safe only minutes before.

Watching Waterworld for the first time in a while, it was remarkable how this film has become a time capsule for how movies used to be made with spectacle in mind. Not to say that movies today don’t have spectacle, but there is a reason why Waterworld can still hold up as a decent action movie, but a movie like The Phantom Menace, that only came out a few years later, is nearly unwatchable today with the sets and many of their characters made entirely by computers.

Waterworld, takes place in the far future, centuries after the polar icecaps have melted covering the planet in water. The Mariner, played by Kevin Costner, is a mutated human/fish hybrid, that has evolved to all the water, but growing gills and webbed feet. His existence is nothing but survival at all costs. He does not have time to get involved in other’s affairs.

Enter Enola (Tina Majorino), a small girl who has strange markings on her back that are prophesied to point the way to dry land. When Enola and her guardian Helen (Jeanne Tripplehorn) find themselves in the care of the Mariner, it becomes a race to protect Enola and the way to dry land from the Smokers and their leader Deacon, played by Dennis Hopper.

Waterworld is mostly remembered for being a huge box office flop. Before the movie even came out, there were already numerous reports of its troubled production that caused its budget to balloon to an unprecedented amount of $175 million. Where the story usually ends is that, domestically, Waterworld only made $88 million, far below the $175 million budget. Realistically, the foreign market helped the movie out, and it ended with a worldwide gross of around $263 million. Add in VHS, TV, and DVD sales, and Waterworld has long turned a profit and continues to do so 25 years later.

With the success of films like Jurassic Park a few years before and the coming cost reliance on CGI, a “flop” like Waterworld was enough for most film studios to write off making movies the old-fashioned way with practical effects and giant action set pieces. Outside of a few exceptions, CGI still rules the roost when it comes to action movies.

It was refreshing to jump back into a time when creativity within Hollywood still thrived. Sure, Waterworld was originally conceived as Mad Max on the water, but it was still a large scale, a fantasy epic that was not based on an already established IP. Something that is rarely seen anymore on the blockbuster level.

Waterworld is not a perfect film and the creative differences that happened behind the scenes assured that the stories and the character would be an unbalanced mess. With Director Kevin Reynolds wanting to make the craziest action film ever, and Costner wanting a more character-driven story and not balls-to-the-wall action. That struggle is evident, as the Mariner’s actions and motivations are never fully clear. He could jump from a humorous action star to a heartless loner at the drop of a hat.

One cannot forget Dennis Hopper in Waterworld. He chews the scenery as the one-eyed villain Deacon as only he could at that time, and as many have said before, he does seem to be the only one that truly had fun during the production of this film. The goofiness of Deacon does throw off the balance of the film. But for a film that does try and take itself so seriously at times, the change of pace helps tremendously.

It is surprising how well Waterworld still holds up as an action movie 25 years later, mostly due to the practical effects. Nothing is better than watching the camera pan around the massive Atoll, a reportedly $5 million set, as all the people are walking around creating a living, breathing world. Something that today would no doubt be done in a closed studio with loads of CGI.

The stunts were also top-notch, and it was refreshing to see stuntmen do what they do best. Plane crashes, boat explosions, far fall, bungee jumping, zip-lining, there is no shortage of action in this movie to get your attention in a way that CGI just cannot. When the Mariner and Enola jump off the top of the gates of the Atoll and ride down the sail of a ship landing on the netting below, I felt a rush of danger and was engrossed at that moment. Getting lost in a moment like that just does not happen as often when you can see the computers at work.

Don’t get me wrong, I am amazed at the things that movies today can do, and the worlds they can create. But it is crazy to think that it has been 25 years since Hollywood took a gamble on large a scale film not part of a franchise with a few exceptions thrown in, of course. Waterworld is not a perfect movie by any means, but it deserves better than being a major big-budget “flop” and the movie that all but killed the use of practical effects on a wide scale. If practical effects were on their way out of style anyway, Waterworld was a hell of a spectacle the method deserved to ride off into the sunset on.

Thank you for reading! What are your thoughts on Waterworld? Comment down below!

[…] is the basis for many films. This type of story is usually brought to life through small scale action scenes and brute characters. Almost every one of these films goes through the motions of having a […]

Great article! Despite its numerous flaws, I still enjoy this movie and it has my sympathy due to the various elements you mentioned: original story (not too original, but not based on something already existing either), 100% practical effects, it’s being a true fantasy epic story…