‘An American Werewolf in London’: Horror, Comedy, and Childhood Trauma

I was definitely too young for this 40 years ago. Bloody hell. 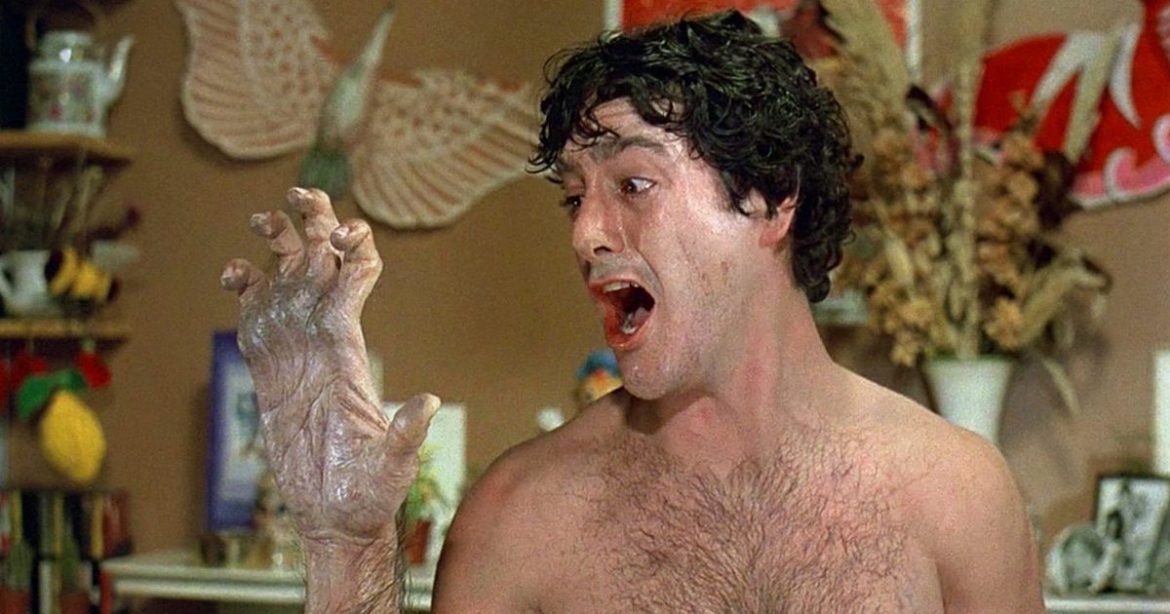 Every so often, the “What was the first movie you saw on the big screen?” topic comes up. For most people, the answer is something like Bambi, or E.T. the Extra-Terrestrial (incidentally, the second film I saw in a theater). Mine was An American Werewolf in London. The inevitable follow-up question is, “Wait… that came out in 1981, how old were you?”
Well, it was technically early 1982 when I saw it, but I was three years old. My mother and older brother took me to one of those cheap ticket theaters that play not-quite-new movies.

Now, it may be worth mentioning here, my dad had died on Christmas, 1981. So, I was kind of obsessing over, and terrified of, death at this point. This was not the movie I should’ve been watching. I think the statute of limitations is up on calling Child Protective Services on my mother, but I appreciate the offer.

My mother and brother thought it was a campy comedy/horror parody, like Young Frankenstein. And hey, directed by the guy who made The Blues Brothers. What could go wrong? Now, to be fair, I didn’t see everything. I shut my eyes several times, or watched through my barely-apart fingers. Even so, it stuck with me. Especially that sound the creature made — an unholy union of a wolf howl, and a human scream. I can appreciate the brilliance of that idea now, but it was very effective nightmare fuel.

The monster under my bed (or sofa) was the one dubbed the “Kessler Wolf” (because the main character was named David Kessler). I used to sit cross-legged, so he couldn’t reach out a paw and grab a dangling limb. This went on for years. Even Michael Jackson, who was my big crush from ages 4-7, put a clip from this film in his documentary, The Making of Thriller. I felt personally betrayed by that at the time.

As I grew, I kept trying to revisit An American Werewolf in London. “It can’t be as scary as I remember, right? I was just too young, is all. This is ridiculous.” Nope. It still freaked me out too badly. Honestly, I think I was already married by the time I was finally able to get through it in one sitting. And I did not sleep well that night.

Staring Down the Kessler Wolf

When I noticed the film’s 40th anniversary was upon us, I knew I had to do this piece. Not just to make you read a rambling account of my first cinematic experience, but as a gift to my younger self. To look through a more critical lens, and hopefully see this movie as, well, a movie. To appreciate the humor, the effects, and the stuff I was too young to understand before.

Let’s gets on with it then, shall we? (Please read that in your best London accent.)

Let’s start with arguably the best thing about this movie. David Kessler’s (David Naughton) metamorphosis into the werewolf is one of the most impressive and haunting scenes I’ve ever seen. Naughton really sells the anguish and horror of witnessing his own body turning into something completely foreign. There is a fourth wall break here that is heart-wrenching. It also comes right at the point where many movies would end the transformation process. I think the shot was partly a nod to classic wolf-man films, that essentially feature a hairy human.

Rick Baker is a legendary name for a reason. The effects makeup and appliances he used here are remarkable. In fact, Baker won the first “competitive” Best Makeup Oscar for his work here. Prior to that, it was only bestowed as a special award. This transformation scene could be put into a film today, and still be effective. It has aged incredibly well. There is definitely something to be said for practical effects.

The only issue I have with this iconic scene, other than it being horrifying, is the music. As I’ve mentioned before, Sam Cooke is one of my favorite vocalists of all time. The use of his rendition of “Blue Moon” here gives me mixed feelings. On one hand, it’s nice to hear him. On the other, I haven’t listened to that recording much, as it’s too tied to this imagery.

Rewatching this film as an adult, I had a deeper appreciation for the friendship between Jack Goodman (Griffin Dunne) and the aforementioned David Kessler (Naughton). Their rapport and conversations carry the first quarter or so of our story, as they’re often the only characters on screen. We get a feel for their characters’ relationship and motivations. We even get a sense of backstory, without it feeling like exposition. For the most part, though, Jack and David talk how friends that age talk, and it works.

They truly care for each other, even later on, when they are a deteriorating corpse, and werewolf, respectively. During the aforementioned transformation scene, David says, “I’m sorry I called you a meatloaf, Jack,” and it’s actually quite touching in context.

That Still Scares Me!

My 40th anniversary rewatch helped me find a lot to enjoy about this movie. Even so, there are still things that genuinely frighten me. Chief among them is the subway/tube scene. The howl from Hades echoing through the station. The terrified victim being stalked at every turn. And worst/best of all, that shot from the top of the escalator, where you see the Kessler wolf in all his creepy glory (and formidable size). That was a brilliantly made sequence, to be honest. Truly memorable, for better or for worse.

Miraculously enough, I had fun revisiting this formerly trauma-inducing movie. It could be credited in part to my love of the TV show This Is Us, and Griffin “Uncle Nicky” Dunne’s presence here. That definitely made things easier at times.

What helped most, was appreciating the work and creativity that went into An American Werewolf in London. Absolutely phenomenal practical effects that still hold up. Jokes and situations that definitely land better when you’re an adult. And wonderfully absurd moments, such as the zoo sequence (“A naked American man stole my balloons.”), that prove this movie doesn’t take itself too seriously. I don’t think I will anymore, either.

Facing my irrational fear of this movie monster is now on my list of the wonderful things MovieBabble has done for me. I like it here.

Thank you for reading! What are your thoughts on An American Werewolf in London? Comment down below!

Yooooo that movie was good af tho, and some parts were funny as hell. Check out my page for some funny shit too!

I can understand that crush. She is an exceptionally attractive woman.

David’s nightmare in a nightmare is truly terrifying, and somehow also darkly funny (I think because of the Muppets being on TV).

You didn’t stay in the cinema for ALL of it in 1982 then? I hope? I’m picturing your mum looking at Jack’s eviscerated corpse, gently steaming on the moors and going “The comedy stuff will be from now on. Maybe a song and dance number”

Honestly, I don’t recall if we stayed the whole time. Most likely, though. I remember hiding behind the brown shawl my mom used to wear.
I know we were definitely still there for the scene where David dreams about eating a deer, because I distinctly remember my mom going, “Oh, look, Patty, deer!” I looked, and then… rip and munch. ha ha.

Yeah, I was a complete wuss when it came to scary movies too. That M. Night shamalan movie devil, the ending, scared tf outta me so bad I was shaking when sitting next to my gf in the theater, lmao.