‘One Night in Miami…’ Deserves a Date With Oscar 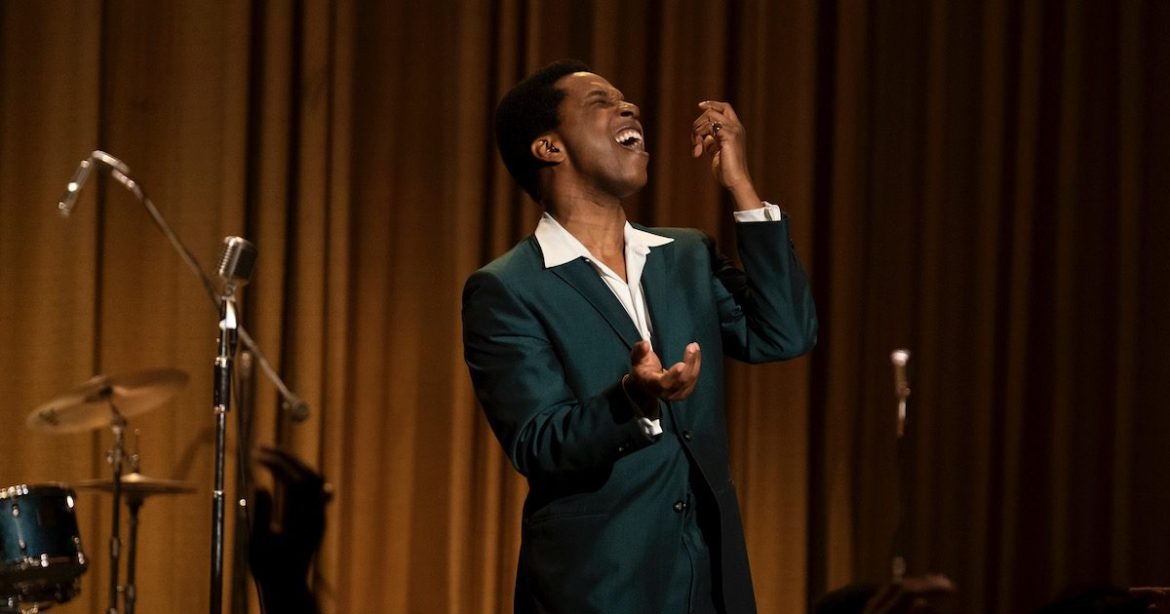 In the interest of full disclosure, I should tell you I am a Sam Cooke fan, and his inclusion as a character in One Night in Miami… is what initially drew my interest. Leslie Odom Jr.‘s portrayal (more like channeling) of Cooke was indeed my favorite aspect. However, the film as a whole impressed me just as much.

Films like this make my job equal parts more enjoyable, and more difficult. More fun to watch, certainly, but it is a bit easier to pick apart things you didn’t care for. I promise I will find things to nitpick here. I will also try to be as spoiler-free as possible, because I’d hate to ruin this experience for anyone.

On February 25, 1964, boxer Cassius Clay (later known as Muhammad Ali) bested Sonny Liston for the title of Heavyweight Champion of the World. As hard as it may be for people born after this date to believe, Clay’s victory in Miami was an upset at the time. His win was so unexpected, in fact, that no official victory party was planned. So, Clay (Eli Goree) celebrated at a hotel with some iconic friends: Malcolm X (Kingsley Ben-Adir), Jim Brown (Aldis Hodge), and Cooke (Odom). This feels like the stuff of fantasy, or revisionist history, but it really did happen.

Director Regina King and writer Kemp Powers skillfully build up to the night in question. The viewer is introduced to the main characters individually, before they’re tossed together in a room. We see each man’s strengths, his struggles, his humanity. In these introductory vignettes, we find moments of humor, drama, and one that left my jaw hanging open in a combination of shock and rage. And this was all before the title had even appeared on the screen.

While watching One Night in Miami…, we are reminded of movies like 12 Angry Men, The Exterminating Angel, or The Man From Earth, which are driven by dialogue, and take place primarily in one room. Given those conditions, there is the risk of being boring, but that is not the case here. Yes, at times it is like watching a stage play (it originally was one), but an engaging one.

King moves beyond that single set to create a more cinematic feel when a scene calls for it. She maintains a balance between the quiet of the room, and the din of the outside world that is quite masterful, especially considering this is her directorial debut. She is one to watch, as she has been as an actress for decades now.

This movie is driven by true friendship, complete with inside jokes and underlying tensions. Knowing how to push each other’s buttons, and when. These are men having fun, yes, but also honest, difficult, necessary conversations. And that is enough. We don’t always need explosions to remain entertained. Well, there are fireworks, and a fire… oh, and boxing, but my point stands.

Let’s talk a little about how good this movie looks. First of all, it is lit perfectly! Locations such as a hotel room, roof, or parking lot look how they would really look. One of my pet peeves in film and TV is when someone turns on a tiny bedside lamp that illuminates the entire room as if it was noon. Or blows out a candle, and a brightly lit room instantly goes dark. There is none of that here.

The cinematography is generally very good. Everything looks crisp, and the color schemes are lovely. You can see expressions clearly, without extreme closeups (another thing I feel is overused in films). When you see people talking in this movie, it looks as if you are sitting across from them, taking part in the conversation. It is much more effective this way. 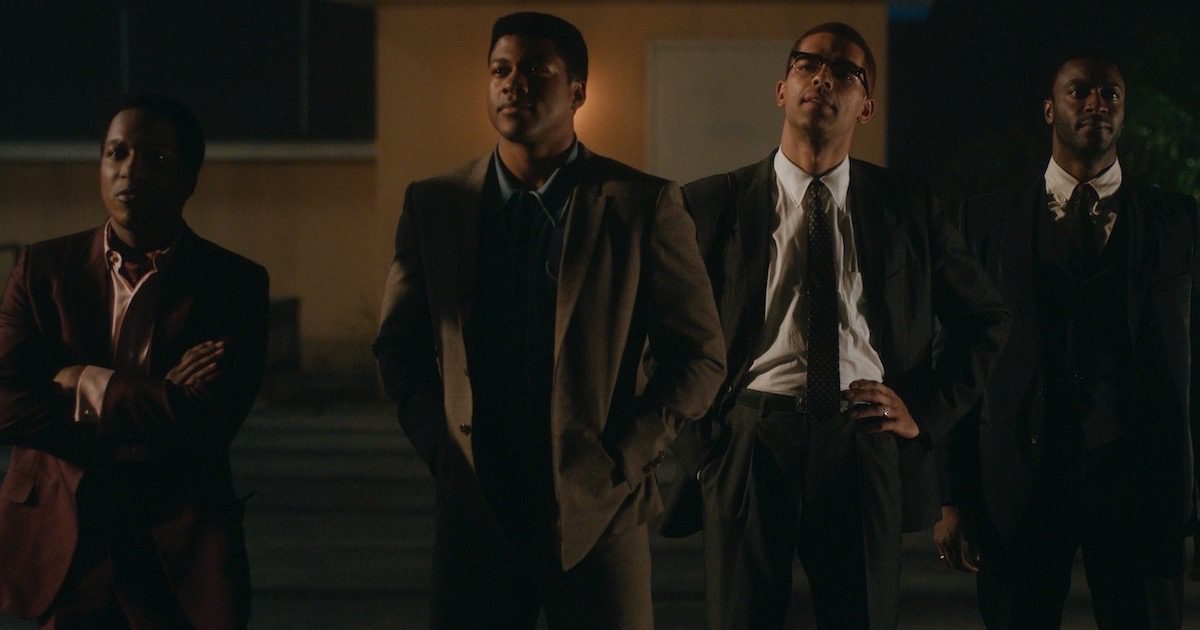 As I’ve mentioned, Leslie Odom Jr. didn’t just play Sam Cooke, he became him! His mannerisms, speaking voice, and singing voice were all almost frighteningly accurate. It made me feel as though I was watching Sam, alive and kicking. That was both comforting and heartbreaking. The latter stemming from the fact that Cooke was murdered on December 11, 1964, not even a year after this storied night. Incidentally, I was born on the 14th anniversary of his death (random, no?).

Even though I clearly have a favorite here, everyone involved did exceptional work. There wasn’t a bad performance among the cast, from the four leads, down to people with one line (well, other than a moment I’ll address in the nitpick section). Everyone gave their all to this project, and it shows.

Eli Goree captured Cassius Clay (aka Muhammad Ali) very well. His speaking voice, and manner of speaking were both so uniquely Ali, you’d recognize it almost instantly. So, the pressure was high on Goree to nail it. And he did.

Admittedly, I was not as familiar with Malcolm X (beyond Denzel Washington‘s performance in Spike Lee‘s biopic, or the occasional video clip). I knew even less about Jim Brown (sorry, sir). I have since looked up videos of both men on YouTube, and can now say confidently, both Ben-Adir and Hodge embodied their roles just as well as Odom and Goree.

At the time I watched the movie, I could tell both of these men are clearly skilled actors, regardless of who they were playing. There was a lot of emotional heavy lifting involved, and they carried it all. Especially Ben-Adir, who had to go from soft-spoken, to almost childlike glee, to indignant, and back again.

I was happy to see Michael Imperioli pop up here, both because I wasn’t expecting him, and because he is one of those actors I’m always sort of tickled by the presence of (especially in Summer of Sam). He did well here, and seemed like he was having a good time with it.

Seriously, everyone was good, except…

What was up with the casting of Johnny Carson (Christopher Gorham), and Ed McMahon (Alan Wells)? That is really the only glaringly inauthentic aspect of this movie, as far as I’m concerned. Both Carson and McMahon had absolutely iconic (and oft-imitated) speaking voices, and neither of these actors sounded like them. At all. Looks-wise, they weren’t too far off, but still, not as close as other cast members were to their characters. They were in the film for mere seconds, so it wasn’t really that big of a deal, but it sort of took me out of an otherwise flawless scene.

Overall, there is not much to fault, here. Perhaps, at times, it feels a bit like Forrest Gump, as far as Easter eggs are concerned. However, the way it’s handled here, it seems a lot more plausible that these men would inspire each other, than, say Gump inspiring “Imagine.”

The Gamut of Human Emotion

Unfortunately, no one was recording that night in Miami (as far as we know), and all but Jim Brown have since passed on. So, the odds of ever knowing what was really discussed that night are slim. Nonetheless, the dialogue and situations in this movie ring true, and stir up emotions from the actors and the audience alike.

We don’t really see movies like these very often (at least not in a mainstream venue like Prime Video). With men showing emotions that go beyond just anger or lust. Celebrities being presented as fully fleshed-out humans, not saints (I’m looking at you, Selena), or CliffsNotes versions of who they were (that one’s you, Bohemian Rhapsody).

Perhaps most important of all, this movie sheds light on what it was like to be a Black man in the 1960s. Especially a famous one. As a white woman born in the 1970s (who is decidedly not famous), I am aware there is a lot of which I am not aware. As I’ve stated in previous writings, my favorite thing about movies is their ability to generate empathy and understanding. To show us events and topics we might know about otherwise. Seeing films like this one leaves one more educated than they were going in. And that is always a good thing. Maybe that’s a bit simplistic, or naive, of me.

If Leslie Odom Jr. doesn’t end up singing “Speak Now” on the Oscars telecast, I will be both disappointed and surprised. The song is pure and touching, and encapsulates the feeling of the film perfectly. It is practically a blueprint for what makes a Best Original Song nominee (if not a winner).

Also, hearing Odom’s real voice as the credits roll, highlights just how well he channeled Cooke during the film. Odom’s real voice is quite different (apart from a phrase near the end that sounded like Cooke, likely on purpose). I can’t state strongly enough how much he impressed me.

In fact, I can’t state strongly enough how much One Night in Miami… impressed me. I think Regina King is going to make as big an impact as a director as she has with her acting career. I can’t wait to see what’s next!

Thank you for reading! What are your thoughts on One Night in Miami…? Comment down below!

Patricia Henderson resides in Northern California, and has been a writer in some form most of her life. She wrote short stories for young authors fairs as a child, and later worked on the newspaper and literary magazine in college. Writing and movies are her main passions, so blogging about movies was a logical leap to take.

[…] the nominees. A nice change from the norm, even if they’re still marred by curious snubs for One Night in Miami and Ma Rainey’s Black Bottom. Steven Soderbergh is taking the festivities to Union Station in […]

‘One Night in Miami’ Gets Deep and ‘WandaVision’...