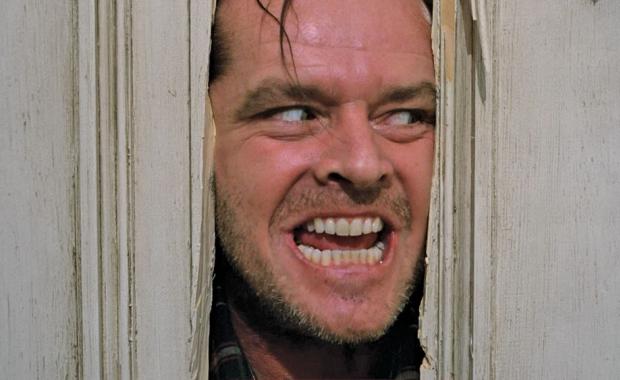 With it being the Halloween season, I thought we should all get into the spirit by reviewing a horror classic, The Shining! As always, the review will be spoiler free.

The Shining is directed by Stanley Kubrick and stars Jack Nicholson and Shelley Duvall.

Jack Torrance (Nicholson) is a disgruntled writer that is looking to escape his writer’s block caused by his home life by becoming the caretaker of the very ominous Overlook Hotel.  Upon starting his job there, Jack finds out that the previous caretaker went insane and slaughtered his family.  After Jack receives this terrifying information, things begin to take a horrific turn as things spiral out of control at the secluded hotel.

Obviously, Stanley Kubrick is one of the most revered directors of all time.  Coming off creating classics such as A Clockwork Orange and 2001: A Space Odyssey, Kubrick was in prime form as a director coming into The Shining.  What I’ve really admired about his work is how much devotion he gives to his characters.  No matter the genre of the film, whether it’s a hardcore war movie such as Full Metal Jacket or a trippy sci-fi movie like 2001: A Space Odyssey, the film is always a grounded character study full of emotions and psychology.

Kubrick was probably a psychologist in a last life with the way he dissects the human mind.  His movies are tense, thought-provoking, and just downright creepy.  These traits really match well to create a well-made horror movie.  Plus, when you add an all-time great actor like Jack Nicholson to the mix, you have a sure hit.  Kubrick movies really take their time setting up each character which can sometimes cause for a slow, and sometimes boring, first act.  With The Shining clocking in with an approximate two and a half hour run time, I made sure to get cozy and stick through the beginning to reap the results of act two and three.

In typical Kubrick fashion, The Shining is a slow burn that turns into an out of control forest fire.  I’d first like to sing the praise of Jack Nicholson’s performance as he was absolutely perfect casting for the role of Jack Torrance.  Nicholson has always had the ability to act very menacing and sometimes just downright insane in his movies.  He contorts his face into the creepiest expressions, which obviously plays well in this movie.

Unfortunately for Shelley Duvall, her performance seems very poor at times when compared to Nicholson, mostly because his descent into madness is so magnetic and creepy.  There’s something paradoxical about Nicholson on screen in that his performance is so mesmerizing that you don’t want to take your eyes off him but yet he’s so terrifying that you want to duck under your bed covers to avoid looking at him altogether.

Creepy is a good way to explain this movie in general.  Kubrick’s direction style oozes off the screen.  Like his other films, Kubrick utilizes a ton of long shots which, in the case of The Shining, amplifies the feeling of dread as you as the viewer wait on pins and needles for something scary to occur.  Sometimes, nothing even happened!  But the combination of long, focused shots and swelling creepy music consume you with dread and fear as you wait for the ultimate scare that eventually occurs.

Kubrick uses genuinely scary and tense imagery rather than jump scares or any other horror gimmick.  I’m so conditioned to the modern day horror movie that has cheap scares that the genuine chilling nature of The Shining really stuck with me even after finishing the film to the point where I may or may not have been afraid to go to the bathroom in the middle of the night after watching it.

The Shining is a cultural phenomenon that has influenced horror ever since its release in 1980.  It has been parodied countless which speaks only to its significance in cinema.  But for all its scares, The Shining lives on for its sense of paranoia and its look into the human psyche through intense isolationism.  Kubrick vividly displays how man can be driven into madness simply by being secluded with the addition of some spooky images, even if the movie itself deviates from Stephen King’s famous novel, but let’s not open that can of worms.

The Shining is an all-time classic not only in the horror movie genre, but in film in general.  Because of its achievements as a film (and also its ability to scare the crap out of me), The Shining gets an A.

Thank you so much for reading! What are your thoughts on The Shining?  Comment down below!

[…] the two plan to go on. This film is absolutely hilarious and always a fun one to watch near Halloween, especially if you aren’t one for scary or gory […]

I really enjoyed your review! Kubrick is just incredible at what he does. I agree that the environment he makes is so creepy. It’s funny, how a creepy feeling can last longer than an outright scare. There’s a YouTube video that actually talks about that feeling. https://www.youtube.com/watch?v=dv8KroxoAhk&t=552s

I just find it interesting how different opinions are sometimes.

Very interesting! That’s why reviewing film is so intriguing! We can all watch the same film and have completely different opinions.