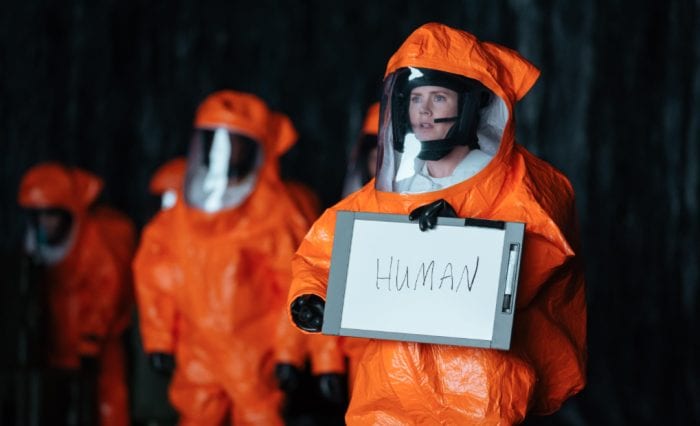 Here’s a review of my most anticipated movie of the fall and winter seasons (other than Rogue One of course), Arrival!  The following review will be spoiler free.

Arrival is directed by Denis Villeneuve and stars Amy Adams, Jeremy Renner, and Forest Whitaker.  The story follows Louise Banks (Adams), a linguistics expert at a university in Montana that is called to action from the military after twelve UFOs drop down in random places all around the globe.  Adams is assigned to try to communicate with the aliens in the UFO that landed in Montana.  As her work progresses, she learns so much more than she could’ve ever imagined not only about the aliens and their purpose on Earth, but also what may be in store for her.

This movie had me hooked the second the trailer shows the first image of the UFO.  Arrival looked beautiful, tense, and intelligent right from the start.  Alien movies have always fascinated me as a moviegoer.  Each good alien contact movie has a different spin on why aliens are on Earth and the human response that comes with it.  Just from the trailer alone, it seemed that Arrival would focus on linguistics.  This is a spin we have yet to see fully realized on screen.  A thought-provoking science fiction movie is a sub-genre that I get really excited about. Denis Villeneuve is a star director as far as I’m concerned.  His last three movies (Prisoners, Enemy, and Sicario) have been stellar, with Sicario being one of the best films of 2015.  All of his movies are very subtle, yet very powerfully directed and contain very heady themes.  It’s no wonder he was chosen to direct the sequel to Blade Runner which hits theaters next year.  The cast is filled with a bunch of professionals as well.  Amy Adams, Jeremy Renner, and Forest Whitaker (among others) always do a solid job no matter the movie.

If you think that you’re going to get a CGI-fest of aliens attacking Earth in a massively scoped action movie, then you’ll be very disappointed in Arrival.  Arrival is a slow burn, ratcheting up the tension step by step.  When I mean slow burn, I mean a very slow burn (I did catch myself looking at my phone).  However, that’s not to say that it is not a rewarding film, it just requires the right mindset in order to be fully appreciated.

Arrival is subtle in its beauty.  Similar to what I’ve discussed so far, it doesn’t rely on crazy visual effects like any of the superhero movies that we’ve come to love, but rather utilizes changes in sunlight and stark color contrasts that make it very cinematic.  It adds to the feeling of the movie, giving  you extra incentive to feel emotional when necessary.  I would not be surprised if Arrival receives a nomination for achievements in cinematography. 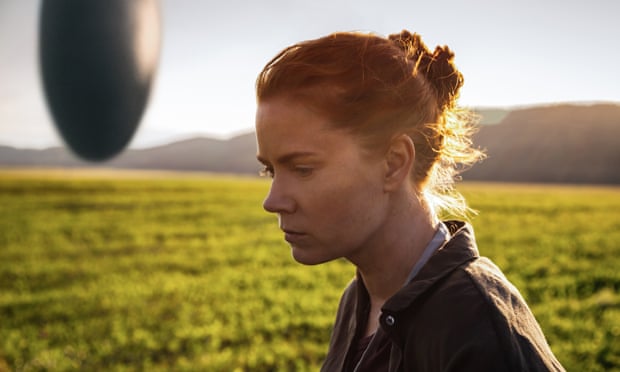 Amy Adams should definitely get consideration during Oscar season as well.  Her performance is subdued (sensing a theme?) but very excellent.  She does a really good job of conveying fear and uneasiness during her first encounters with the aliens while also making her character’s expertise of linguistics believable.  In fact, Arrival is well acted all around.  A poor acting performance would have stuck out like a sore thumb in this movie since it is primarily a thought piece.

Denis Villeneuve does another masterful job directing this movie.  Going on with the theme of the review, its quiet yet effective while definitely being award-worthy.  Arrival has genuine uses of emotion mixed into elements of science fiction.  The use of language in this film is so fascinating and thought-provoking.  This film in general is incredibly thought-provoking for that matter.  He does a fantastic job cutting the film together to keep you in the dark of what exactly is going on in the movie until just the right time to give you a satisfying, yet absolutely heart-breaking ending.

While this film is certainly not the most rewatchable film in the world, it really stays with you afterwards, a trait that most films fail to have.  The best sci-fi movies have strong character moments and universal themes with uses of science fiction as a means to convey those ideas.  I’d like to think Arrival falls into that category.

Arrival is a quiet, thought-provoking movie that offers great performances and ideas, despite it being a movie that you are more likely to respect rather than absolutely love.  With that in mind, Arrival receives an A.  Arrival will most likely get receive a lot of love from the Academy.

Thank you again for reading!  What did you think of Arrival?  Do you agree or disagree with my assertions?  Please be sure to like/share to get others involved in the conversation.

What movie should I review next?  Whether it’s old or new, the choice is up to you!

Having only just watched this film, I really enjoyed it! Would love to read the book but apparently it was a short story so….

This was a heady film. I gave it an A. It touched me on a highly personal level which has been extremely rare. I bought the blu-ray and watched it recently and found it affected me somatically this time.

This is a small spoiler alert – the whole perspective on time is an interesting one given that linear time is predicated on human language and is an invention. When I have expanded beyond linear time – well…

It’s certainly an interesting concept! I really appreciated how tasteful it was done rather than all in our faces like some directors may have done.

I basically agree with your review. (I wrote up some thoughts on my blog as well and there’s some overlap.) I was particularly struck by your “respect rather than absolutely love” line, because that’s how I feel, too. But if I thought about a letter grade, I’d only give it a B/B+ rather than an A. Or an A for reach and a B for grasp or something like that. But even a B is still a “check it out” grade.

I could totally see why you would give a B/B+ to it. When I grade I look for things that are wrong with the movie so even if I don’t consider it super rewatchable but its just obviously well made I’d still give a high grade. Plus, Arrival has that quality where it could get better over time, so the grade may reflect that as well. But honestly, grades are so arbitrary (I only do them because readers enjoy some type of score to a movie) that it’s really unnecessary. I agree with you that regardless of whether it’s an A or a B or whatever, it’s still worth seeing.