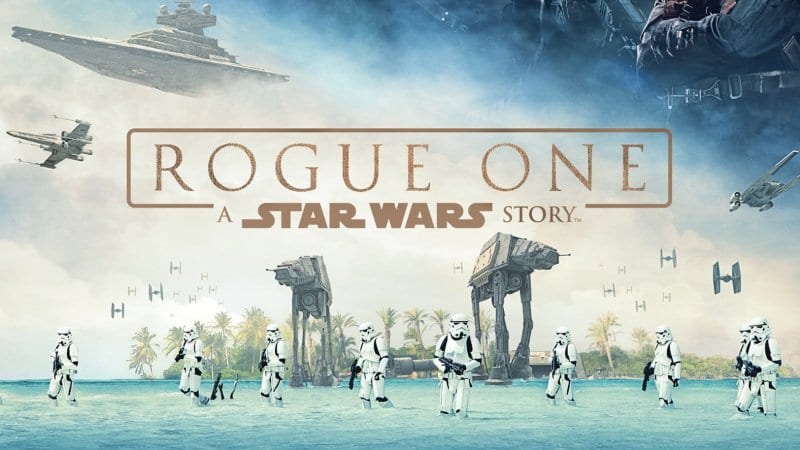 After waiting a full year to be satiated with more Star Wars after the release of The Force Awakens, the wait is finally over.  Rogue One: A Star Wars Story finally hits theaters this week much to the pleasure of fans everywhere.  The last thing I want to do is ruin a movie of this magnitude, so this review of course be spoiler free so that no one’s theater experience is affected.  Be sure to comment at the bottom of the page with your own thoughts to get the conversation started!

Rogue One: A Stars Wars Story is directed by Gareth Edwards and stars Felicity Jones and Diego Luna among many more in a movie full of superb actors and actresses.  As you may know already, Rogue One acts as a prequel to Episode IV-A New Hope (the plot actually comes from the opening crawl of A New Hope) as we see a group of rebels come together in order to steal the plans of the Death Star away from the evil Empire before they can use the weapon to destroy countless planets as part of their rule of the galaxy.  The film acts as the first non-episodic Star Wars movie and will be the first of many more anthology films to come from Disney.

Being a pretty big Star Wars fan myself, I was beyond excited to see Rogue One ever since Disney announced they were making the film back in 2014.  Since Disney purchased the rights of Lucasfilm back in 2013, they have done a really solid job of fleshing out the Star Wars universe.  There has been many books and animated TV shows that have really strengthened the lore to hold up the episodic movies.  Just about everyone wants to more Star Wars to chew on and Disney is doing a great job of fueling more love for everything Star Wars.

Rogue One is the next step for Disney to continue to build up the Star Wars universe, and the trailers have made it look pretty epic.  I really like that this is the first anthology film Disney decided to release, considering how much of Star Wars lore surrounds the Empire and how they come into power which obviously revolves around the Death Star.  If done correctly, the movie could easily enhance A New Hope which started this whole Star Wars craze decades ago.

With that in mind, I can say confidently that Rogue One is another worthy entry into the Star Wars canon.

I need to first praise the special effects team involved with Rogue One.  I really appreciate the use of both models with practical effects and digital effects.  There are some action sequences that are absolutely breathtaking to behold.  Gareth Edwards does a fantastic job of blending very different settings that contrast in color scheme that create some awesome visuals that blend the famous Star Wars imagery and ships with new locations.  These are some of the best action sequences ever in a Star Wars film.  There’s also a couple instances of motion capture that blew my mind.  You can tell that the technology is still a work in progress that Disney implemented into this movie, but, in some cases, you lose the ability to distinguish between what’s real and digital.

Rogue One also has a welcomed alteration in tone than we’ve seen from the seven episodic movies so far.  It’s much more dirty and gritty.  You see stormtroopers with a lot of dirt on their helmets, rebels lying in the dirt in the heat of battle, and members of both the Empire and the Rebellion in the midst of down-pouring rain and other elements.  This is also probably the darkest Star Wars movie.  Rogue One certainly takes on the more dire straits of its war feel.

One of the standouts of the film was Alan Tudyk as the droid K-2SO, a reprogrammed imperial droid.  There’s one scene that I recall where he ripped off a couple jokes in the row which had me (and the rest of the audience for that matter) laughing continuously.

Most of the acting was spot on for that matter.  I had a minor issue with Forest Whitaker as Saw Gerrera.  His performance definitely felt like he was overacting at times and took me out of some very emotional scenes for a moment.  But other that him, every other actor was very solid.  I really loved Felicity Jones as Jyn Erso and the rest of the crew with actors such as Diego Luna, Donnie Yen, and Jiang Wen were super engaging.

However, one issue I have with the movie is that it has a “Suicide Squad problem.”  I’m in no way trying to compare Rogue One to that mess of a movie, but it follows the same line of issues where you have a group of people come together that have limited backstory which leads to some information dumps of exposition throughout the film.  Because of this, some of the very emotional moments of the movie can fall somewhat flat because you don’t have a complete love and devotion for these characters.  You come to really like every single one of the characters because they’re super fun and engaging actors and actresses, but you don’t completely connect with them like you would want.

I feel as if this issue could have easily been fixed if I read the Rogue One novel entitled “Catalyst” that had been released a few months ago before watching this film.  The book delves deeper into the construction of the Death Star, focusing on the events that directly lead up to the Rogue One movie.  From reading reviews of the novel, it definitely seems that reading the book would be worthwhile.  However, reading a book should not be required to fully understand and love each character in the movie.  Unfortunately, I have to review the movie based on its merits alone.

But I don’t want to get bogged down in the negatives of Rogue One because it truly is a wonderful entry into the Star Wars saga.  The third act of this movie is worth more than the price of admission alone.  No spoilers of course, but there’s one final moment in the movie that had me shocked, amazed, and had the fanboy in me screaming with glee.  It’s easily my favorite sequence in the movie (I’m sure many others will feel the same way) and one of my favorite sequences ever in a Star Wars film.  It’s absolutely glorious.

This movie finally answers a question that Star Wars fans have been questioning fo years now.  The movie pulls it off in such a smart way that you just begin to smile.  Rogue One deepens the lore of Star Wars without altering or changing already established facts, allowing continuity of Star Wars canon to take hold.

So Rogue One: A Stars Wars Story is a beautifully filmed, valuable addition to the episodic Star Wars movies, even if it is more of a “deep-cut” than other Star Wars movies.  I’ll give it an A- for its troubles.  You’ll want to watch A New Hope right after leaving the theater!

Have you seen Rogue One?  What are your thoughts?  Please comment and let me know!

Just reading this now, but this is a great and very fair review! I personally struggled a bit with the the number of characters and worlds crammed into the exposition. You do a good job acknowledging that piece but also balancing that with all the positive points. I feel like I like the movie more after reading your review!

Thank you so much! I really appreciate it!!

I’m going to see it on monday. Will let you know what my thoughts will be shortly after that. As for this review: great post! I have the novel you are regering to, but have not had a chance to read this one yet. It will probably be after the movie that I will get a chance to ?