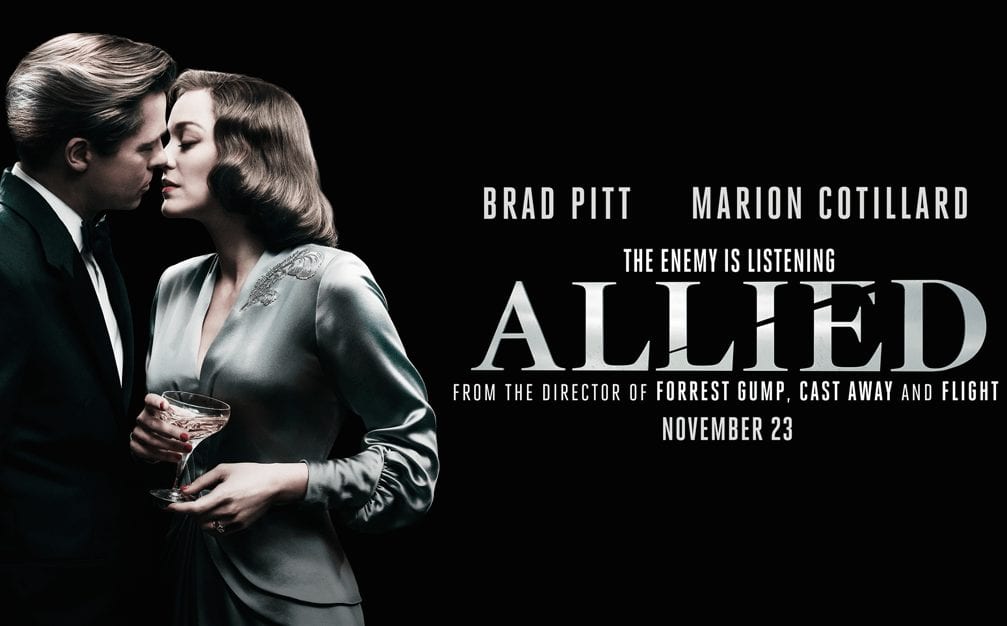 The next film from famed director Robert Zemeckis is the wartime romance film entitled Allied, starring Brad Pitt and Marion Cotillard.  As always, the following review will be spoiler free.

As mentioned above, Allied is directed by Robert Zemeckis and stars Brad Pitt and Marion Cotillard as Max Vatan and Marianne Beausejour.

The two leads two spies that cross paths during a deadly mission behind enemy lines in World War II.  After they complete their mission, they reunite and eventually fall in love and have a family together.  While things seem to be great, everything changes when Max is told that Marianne is being investigated for possibly being a German spy.  The investigators tell Max that if they find this information to be true, he must execute her by his own hand.  Max then goes on a mission to uncover the truth once and for all.

Let me start off by saying that I’m a huge fan of Robert Zemeckis.  Not only did he direct one of my favorite movies of all-time in Forrest Gump, he directed other classics such as Cast Away, Back to the Future, and even Who Framed Roger Rabbit.  While not all movies in his filmography hit the mark completely, there is usually something very memorable about his films that a moviegoer can enjoy.  Needless to say, I was very excited about Allied once I began to hear about it.  When you then add talents such as Brad Pitt and Marion Cotillard in front of the camera, the excitement level turns up another notch.

When I first heard the description of Allied, the first thing that came to my mind was that it was Mr. and Mrs. Smith in a World War II setting.  The chemistry between Brad Pitt and Marion Cotillard was apparently so palpable that many speculated that this movie was the reason for the break up of Brangelina (tears).  While this theory was later debunk, it does add intrigue to the final product of the movie.  If you add a well told, intriguing story to this supposed chemistry, it’s likely that Allied would be a hit.

Unfortunately, the chemistry between the two lead actors is never fully realized as Allied as a whole falls pretty flat.  Pitt and Cotillard most definitely have solid chemistry on screen, but I felt as if their relationship was forced and very sudden. They go from being spies on a mission to falling in love in no time flat.  I wonder if there was a couple scenes cut out of the movie that showed their bond growing because it felt very unnatural.  Since Allied rests solely on the relationship between the two, there should have been a better set up of their relationship to get me more invested as a viewer.

Moreover, Allied has a serious pacing issue.  The movie never really gets the thriller status that we saw in the trailers.  Hardly any of the pivotal moments in the movie carry any weight with me as the viewer.  There’s no sense of urgency to the film so it most definitely has trouble hooking its intended audience.  There are some moments that really could have been heart-pounding but unfortunately the film does not evoke enough emotion to be completely investing.

These flaws do not mean that Allied is a complete failure, however.  Allied is well acted across the board, especially by Marion Cotillard who does such a fantastic job of acting as an actor (that line will make sense once you see the movie).  The movie is also absolutely beautiful to look at.  Every frame oozes the 1940’s feel that it strives to recreate and has a couple fun camera movements and shots from director Robert Zemeckis.  If you enjoy film and filmmaking, there is certainly something for you to enjoy in Allied.  This is certainly not an awful movie, it’s just not as good as it should be considering the talent involved.

Allied is a good example of combining talent on both sides of the screen with questionable writing.  You won’t be annoyed watching the movie and the actors will breath life into a couple scenes purely on talent  alone.  This movie should have been great.  Unfortunately, we all have to settle for “meh.”

Allied has great talent and looks gorgeous.  But, it fails to pull you in emotionally and ultimately falls flat.  Because of this, Allied gets a C.

Have you seen Allied?  What do you think of the movie?  Comment at the bottom of the page and let me know!

A helpful review – have been considering watching this but will avoid until I can watch it on demand.