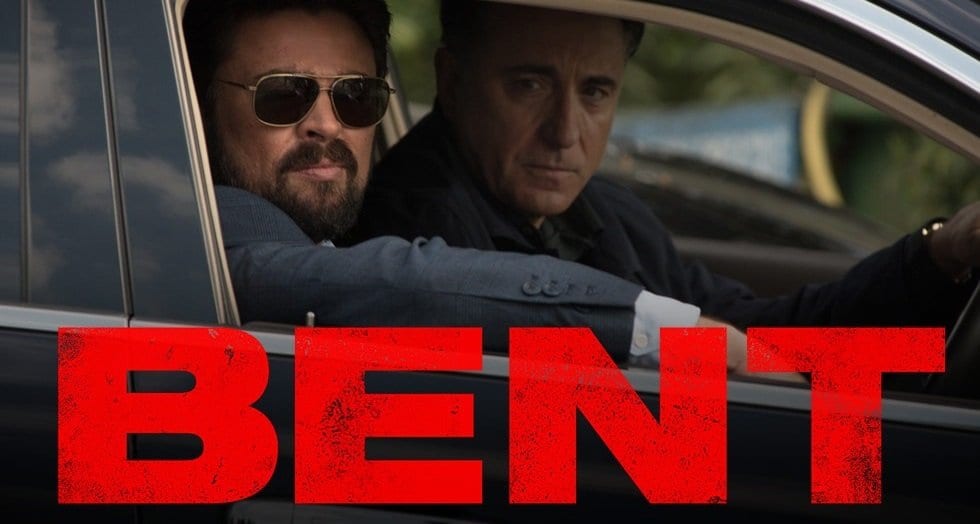 There are great action movies about out-for-justice characters, with bullets flying, car chases, and the like. And there are more intimate movies, driven by an emotional story. Some movies blend the two styles well, and give us characters we are emotional about being put into harm’s way. This makes the stakes higher for the viewer, because we really care what happens. And then… there is Bent. The following review will be spoiler free. 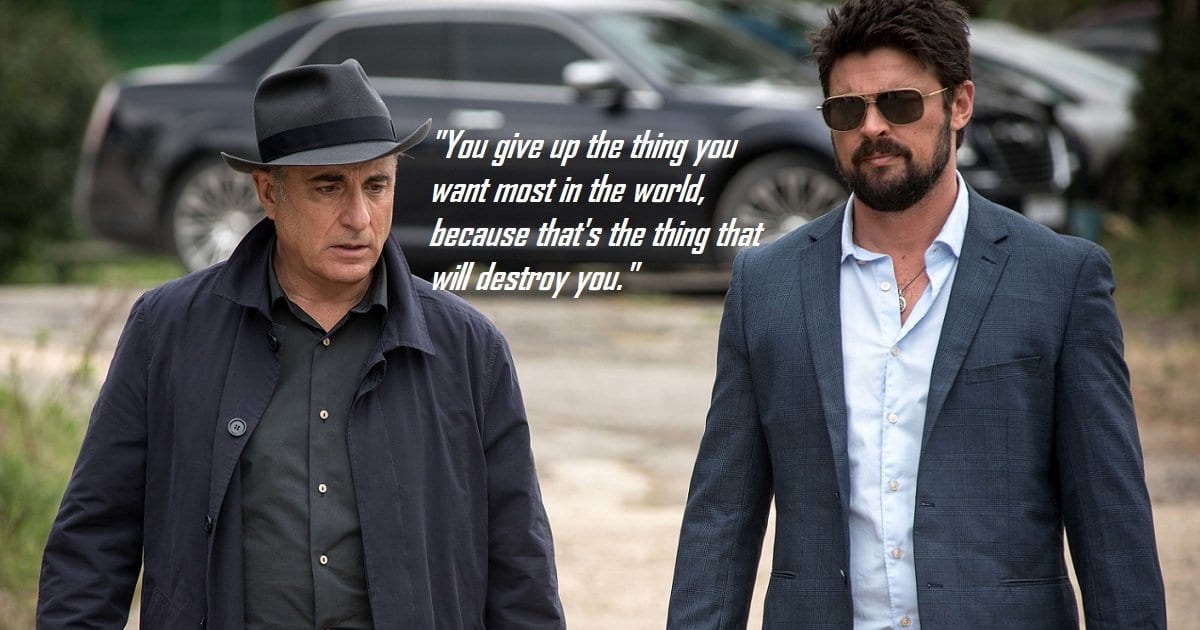 Written by: Bobby Moresco, based on a novel by J.P. O’Donnell

Danny Gallagher (Urban) is a proverbial ex-cop out for justice character. Gallagher and his partner (Vincent Spano) were caught up in a sting gone bad, the fallout from which left his partner dead and him in prison. Upon his release, Gallagher is labeled a “bent” cop — meaning corrupt — and is hated by all the other officers in town.

Gallagher is attempting to locate the man who killed his partner, which uncovers a deeper conspiracy. However, with the city’s entire police force against him, he gets much more hindrance than help along the way. Not the least of his obstacles is Rebecca (Vergara), a character steeped in the femme fatale tradition.

Bent is largely based on the novel “Deadly Codes” by J.P. O’Donnell. O’Donnell wrote a series of books about character Danny Gallagher, and reportedly, some details were lifted from various installments. This does Bent a disservice, because a summary of the book is more compelling than the film we are left with.

In “Deadly Codes,” Gallagher is hired to investigate the death of a woman killed in a car bombing in her own driveway, and find the victim’s lover who has disappeared. Authorities investigate whether the attack was meant for the victim’s husband, who holds a top position in a government agency. Meanwhile, Gallagher is on the run from forces trying to stop him.

That is the movie Bent set out to be, but it failed to focus enough on this central story. Of course, it isn’t unusual for a film adaptation to differ from its source material, in fact, it’s somewhat expected. What makes this case surprising is the fact that the author himself is the film’s producer. 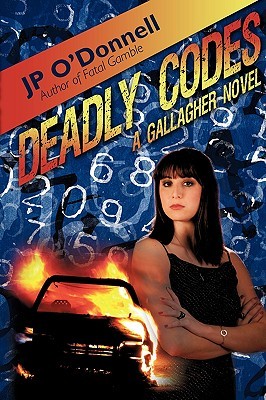 Bent Succeeds In Some Ways

Where this movie excels is in its well-choreographed action sequences. Urban as Gallagher is skilled and natural when it comes to carrying and firing weapons, as a former police officer would actually be. Fights are also convincing, and explosions are not over-the-top. Truth be told, a movie like this is mostly about the intensity. In that respect, Bent succeeds.

Bent’s costuming and color palette is more on the classic side. Suits, leather jackets, lots of black. This gives Bent a slightly more timeless feel, which is a definite plus, as it isn’t likely to feel dated in five years.

Also good is Urban’s use of an American accent. It’s more generic than it is from any specific region, but it covers his natural New Zealand dialect quite well. If you had never heard his natural voice, you would assume the actor was American.

Sofia Vergara does a decent job as the mysterious Rebecca. As someone known for comedic roles, she handles the intrigue and drama well. Unfortunately, the character is not fully fleshed out, and in the end, serves mainly as eye candy and a plot device. Hopefully, Vergara will explore the action genre more, and get roles that allow her to shine. She has the potential to really surprise people. The All Purpose Intense Expression

One very distracting element in Bent is that Karl Urban’s expression remains virtually unchanged for the entirety of the film. It is kind of a blend of Jerry Maguire era Renée Zellweger, and Steven Seagal on a movie poster. He suffers from resting tense face. An example: a bar scene where he’s watching his girlfriend (Grace Byers) sing, results in the same look he has while searching for a gunman. It’s unclear if this is a character choice, or something that happens involuntarily. To the viewer, it comes across as a, “look at me, I’m totally acting right now” expression, which is unfortunate.

Uneven Performances in an Uneven Movie

There are good scenes in Bent, where everything fits, and it feels like it’s coming together. And then there are scenes that are laughable in their execution: from shaky camera work, to overly clichéd dialogue and plot devices, to nudity for nudity’s sake, and crying for crying’s sake. There are several scenes which leave the audience asking, “did I miss something?,” because they come out of nowhere.

Sadly, the acting is rather hit-or-miss, too. A good example of this is Andy Garcia’s performance as Gallagher’s mentor/father figure, Jimmy Murtha. Garcia has always been a reliable actor, and he is here, part of the time. It almost seems as though he realized midway through that Bent wasn’t what he expected going in, so he phoned the remainder in. Like a later Marlon Brando. A character who is simply too good for Bent is Chuck, an explosives expert our main character consults. Actor Trai Byers (husband of the aforementioned Grace) portrays Chuck, and makes the most of his little screen time. As they say, “there are no small parts….” The scene where Chuck and Gallagher interact most is one of the few scenes where Bent achieves what it was probably striving for. Chuck is an intriguing character, and Byers plays him in such a way, that it makes you desire more of him. We want a backstory, more scenes where he is the focus, or even a movie where he is a central character.

And one of the best things about the entire movie is the chemistry between Danny Gallagher (Urban) and a character named Casey (Patrick Brennan, the director’s brother-in-law). The relationship isn’t given as much screen time as it perhaps deserved, but character development isn’t this movie’s strong suit. Casey is one of the (very) few reliable people in Gallagher’s life, and Brennan plays the character with a very realistic charm. He feels like a real person, and it’s a shame he doesn’t get to do more. Bent provides a scene where things are all tied up via a rather lazy exposition monologue. Honestly, if the story had been as organized as said monologue, this would have been a much better movie. Then, some characters get closure, and a slow zoom out aerial shot starts as music plays. Seems like a decent ending.

And then… the movie keeps going for an additional thirty plus minutes. This is where things feel out-of-order: we’ve seen an ending, and now we’re getting more story. This remaining act succeeds in destroying someone’s character, and then killing them off. Then, they have an actual ending that is the most chuckle-worthy 1990s romantic comedy style wrap up you can imagine (complete with an acoustic guitar-driven love song).

Overall, Bent serves as a popcorn movie one can enjoy on a lazy afternoon. There is a lot of action, and some cop movie tropes that feel familiar enough to make it fun in parts. However, it just doesn’t quite hit the mark it is aiming for. Also, the fake-out ending is way better than the real one.

If you’re in the market for an “out for justice” story, you’d be much better off seeking out something like the new Death Wish remake.  Or, you know, the original. Thanks for reading!  What are your thoughts on Bent?  Comment down below!

Rome, Italy, not a convincing substitute for Boston, MA.

I forgot to mention: Bent is playing in select theaters, and some On Demand services (like DirecTV Cinema).