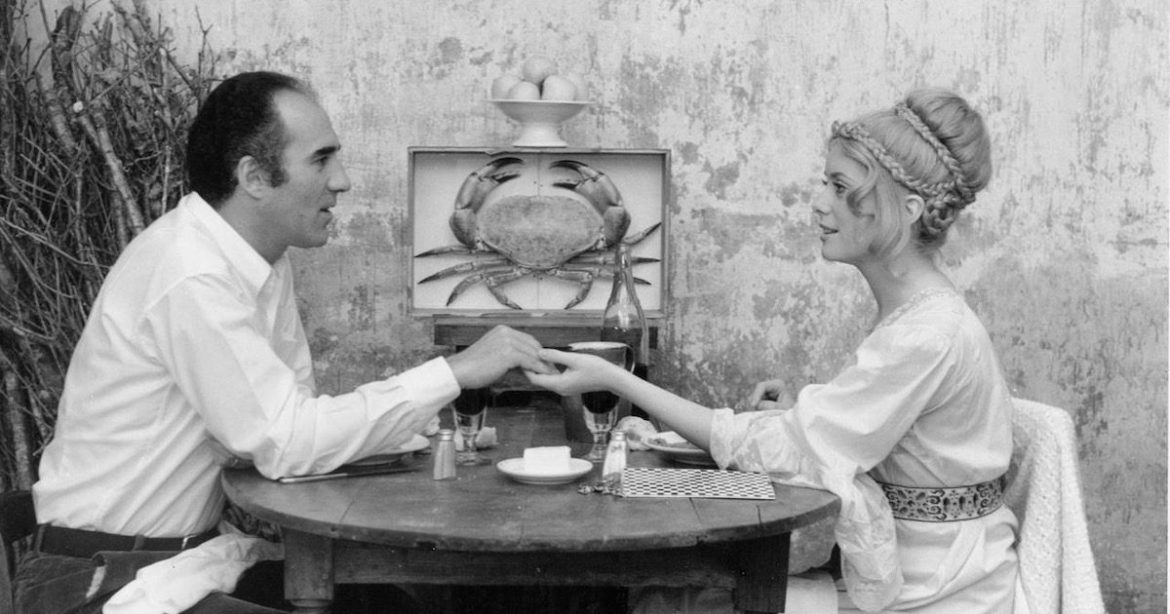 In 1966, Agnès Varda finally revealed herself to be human after all. Despite her latest film being populated by big names, it tanked financially. Even more distressing, the critics didn’t take to the film either; it quickly became a near-forgotten footnote in Varda’s filmography. Even Varda herself admitted decades after its release that she wasn’t the proudest of it. And while that all may be true, Les Créatures is, upon reflection, unique enough to warrant a fresh look. So let us look.

Les Créatures (The Creatures) is a 1966 narrative feature film written and directed by Agnès Varda, starring Michel Piccoli as Edgar Piccoli, a writer who has recently moved to an island with his mute wife. Edgar, having struggled to find the motivation to write, finds himself involved in a strange conspiracy that is affecting the lives of the various townspeople he encounters; it is in this conspiracy that may lie his inspiration.

A Warning: Varda has yet again crafted a film that rewards the viewer being unaware of what awaits them when sitting down to watch it. However, I feel that I am able to discuss Les Créatures without giving away the “big reveals” of the plot, so there will only be what would constitute as mild spoilers for the film in this article, specifically its bending of tone and genre.

As it’s turning out, it is difficult to firmly grasp what to expect from Varda at this stage in her career; from the very beginning of Les Créatures, the audience is given a totally new style of filmmaking. The film is once again black and white (which I must remind people was an artistic choice by the mid-sixties). It is also, for the first time in Varda’s career, widescreen! In addition to these aesthetic choices, Varda throws fast-moving helicopter shots, time-lapse photography, and a dissonant orchestral score at the audience, all in the first five minutes! Forgive me, but as I sat watching this for the first time, I couldn’t help but think to myself that Les Créatures felt distinctly…masculine.

But let’s set gender theory aside for a while. As we progress, the stark shift in style reveals itself to be incredibly appropriate; the characters in Les Créatures fear that they are somehow being manipulated, or worse, doing the manipulating. The score brilliantly reflects these anxieties. The widescreen aspect ratio makes for an image where people look isolated when alone in the frame, but still in danger of being spied on. And the choice of black-and-white makes the winter setting feel colder and the mood bleaker, in addition to allowing Varda to once again play with color (in a way I will not reveal).

Falling Off the Deep End

Moving on from the stylistic elements, Les Créatures is also a very large departure from Varda’s previous works in terms of its genre(s). The opening minutes of the film suggest a moody drama, where Edgar tries to write in peace while the town antagonizes him. This would fit her right in her lane. However, as the film progresses, stranger and stranger things begin to happen, both in the scenes and with the image itself. Certain moments feel like they could’ve been ripped straight out of a horror film or an erotica. They prompt the question: is everything we’re seeing actually happening?

The effect of these scenes is one that puts the viewer on edge, so when the bottom does finally drop out and Les Créatures enters an entirely different genre, one cannot help but feel whiplash. From then on, the film becomes astonishingly straightforward, and it’s fun. But at the same time, the confusion about what is real never leaves entirely; depending on the viewer, the film perhaps loses all clarity. Regardless, when the film ends with everything seemingly resolved(?), it comes across almost false.

But is that on purpose?

Back in 1962, Varda married Jacques Demy, a fellow French New Wave director. Demy was already an established creator when they got together, but in 1964 he released The Umbrellas of Cherbourg, a musical starring Catherine Deneuve; the film catapulted both Demy and Deneuve to international stardom. Varda wrote the script for Les Créatures during a winter she spent on an island with Demy. She cast Catherine Deneuve to play the part of the writer’s wife and muse. And she dedicated the film to Demy in the opening credits. To me at least, the connection is clear. With Les Créatures, Varda places her writer (her husband) in her own situation: on an island over the winter, trying to connect the dots. Varda also emulates Demy’s more masculine style, with the widescreen format and sweeping camera making the film seem as big as possible, despite its intimacy.

Varda does all this to support a portrayal of the struggle of a writer finding inspiration as visually as possible. The writer, brainstorming, takes in the surrounding world, and the characters that inhabit it. Then the writer begins to form the narratives. It becomes like a game, where people move around a board and face each other. Naturally, the writer wants things to go well for the characters, but sometimes evil must occur in order to keep things interesting. In the end, the writer resolves the narratives (or doesn’t), and births the final product. Whether the things that happen to the characters actually happened to the people that inspired them isn’t really relevant in the mind of the writer; the story is the thing.

Upon reflecting on Les Créatures, Varda’s regret was that she didn’t go farther and darker with the material. I’m inclined to sympathize; it almost feels as if the film is holding back at certain points. Then again, if the film did lean further into the shock value, the focus could easily be pulled away from the writer’s dilemma that really is the heart of the film.

Ultimately, I myself am not yet totally sure how I feel about Les Créatures, but it is clear to me that this film deserves a resurrection. Not only is it a rollercoaster of a viewing experience, it’s also a fascinating portrait of the writer’s process and perhaps also Varda’s relationship to her husband.

I give Les Créatures 6 chessboards out of 11 small metal discs. Watch it now on The Criterion Channel.

We’ve focused on Varda’s features for a while now, but it’s not like she stopped making short films! In fact, in the time between Cleo from 5 to 7 and Les Créatures, Varda directed two documentary shorts, both exploring the intersection between politics and relationships. We’ll look at Salut les Cubains and Elsa la rose next week, as well as something else (something special). Until then!

Thank you for reading! Have you seen Les Créatures? Comment down below!