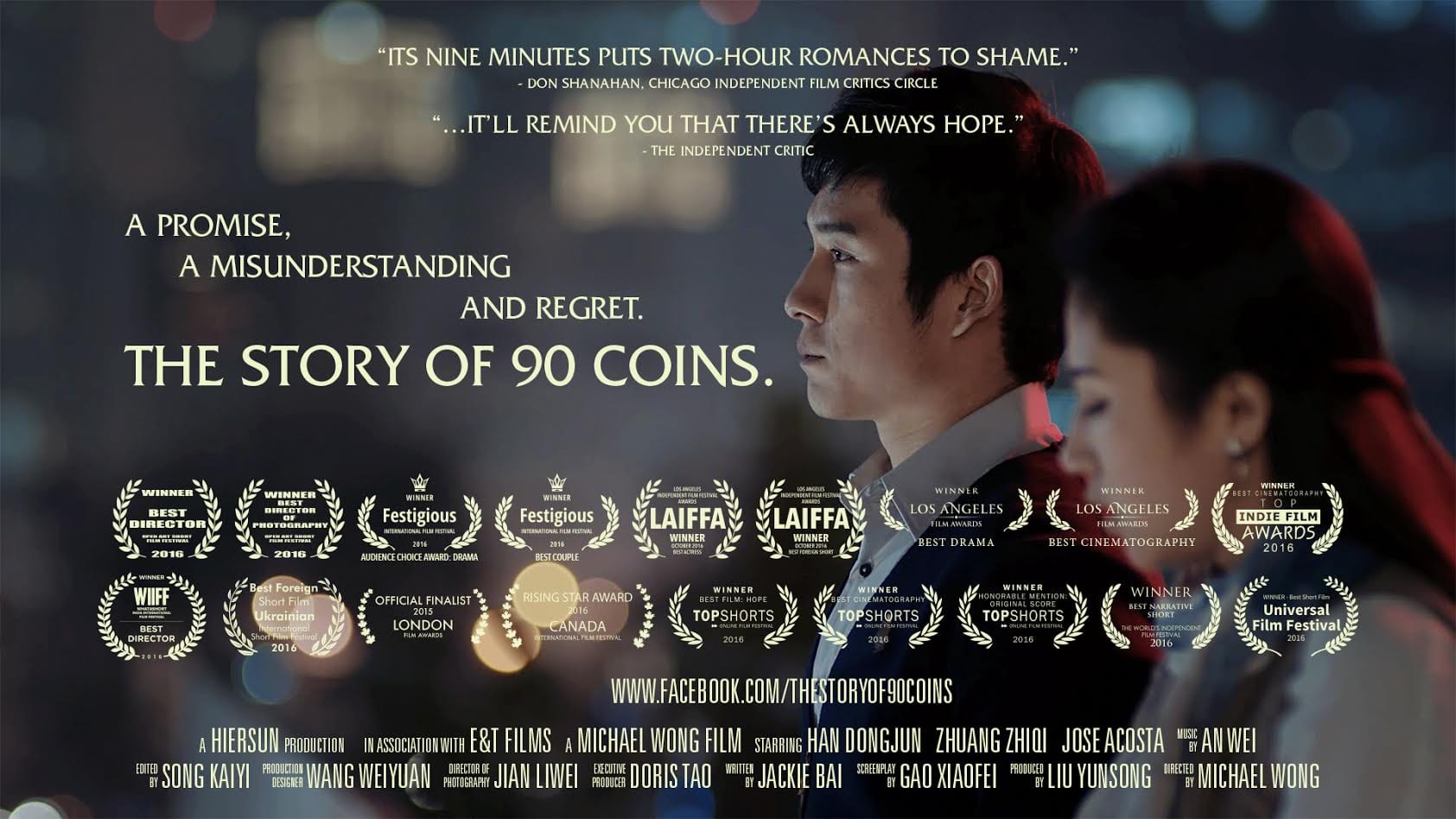 Independent film is a major proving ground for new waves of talent to hit Hollywood and all other hubs of film and performance around the world.  I had the opportunity of stumbling upon a short film that has received countless awards from various film festivals and awards ceremony entitled The Story of 90 Coins.  To see if the film has any opportunities for growth for those involved, I made sure to pay close attention.  The following review will be spoiler free.

The Story of 90 Coins is a foreign short film directed by Michael Wong and stars Han Dongjun and Zhuang Zhiqi.

We follow a young couple who have made a special promise together.  The man promises to show the girl his true intentions by giving the girl one coin per day for ninety days.  The two characters can then meet up and share each others company.  During these ninety days, the man hopes to prove to the woman that he is worthy to marry her.  However, as their relationship matures, complications arise, leaving the two at an impasse.

I was very completely unaware of The Story of 90 Coins until the director, Michael Wong, reached out to the site and asked for my thoughts.  I’m a big proponent of independent films as they are the predominant source of innovative, original ideas which seems to be lacking in Hollywood as of late.  Because they aren’t the films that a studio is counting on to fund countless other projects, smaller films are typically allowed tell the story as they see fit.

Short films, like The Story of 90 Coins, are typically the proving ground for aspiring directors, actors, etc.  If these short films are good enough, directors can be quickly thrust into larger projects that springboard their career.  However, the issue about short films is marketing them to reach a wide audience which requires a lot of time, effort, and money that many do not have.  Fortunately for The Story of 90 Coins and its creative team, the film has received over fifty awards in total, leading to a nice little run for the film at festivals.

But is the film worthy of the accolades it’s receiving?

As an opening remark, The Story of 90 Coins is surprisingly very cinematic in look and feel.  The production value of this short film feels a lot like a higher budgeted film.  Many short films look incredibly cheap due to the lack of funding as well as less than stellar camera work, but The Story of 90 Coins never once feels like less than a studio production.  I give a lot of credit to Michael Wong and the rest of the team for their efforts.  From the first shot of the short film that overlooks a star filled skyline, you are immediately drawn into the style.  I’ve seen multiple full length movies this year with multi-million dollar budgets that appear far less cinematic than The Story of 90 Coins.

The Story of 90 Coins has a nice story that could be adapted into a feature film down the road.  The idea of the giving of coins to the woman was a nice twist on a romance tale that we have not seen as of yet.

The typical outline of a romance movie is that two people come together and don’t exactly see eye to eye.  Then, through some interaction, they begin to enjoy each other which eventually leads to mutual feelings of love and desire.  However, some misunderstanding or argument occurs later towards the third act of the typical romance film which then makes the couple break apart and rudiment by themselves for awhile only to get back together in some sort of grand gesture that caps off the film.  But The Story of 90 Coins cleverly subverts this trope with its story telling device.  The coins and the aftermath of the their importance make for a nice breath of fresh air.

But that’s not to say that The Story of 90 Coins isn’t without it flaws.  Some of the dialogue feels very blunt and forced, lacking a certain nuisance or understated feel that would have really given The Story of 90 Coins a better narrative flow.  This may or may not be a translation issue, however.  The director Michael Wong is of Malaysian descent and the dialogue is translated into English subtitles.  But nevertheless, the film felt a little clunky at times as character motivations felt forced and abrupt with awkward sentence structure.

While The Story of 90 Coins has a sweet message, there is a creative choice at the end of the film to “say” this message rather than “show” the message by having it appear in text after the film cuts to black.  The last frames of the short film suitably explains this theme through solid direction and editing.  However, the filmmakers have the need to come out and explicitly express this theme.  This notion effectively manipulates the audience in how to feel rather than letting them figure it out for themselves and apply their own meaning to the film.  Showing rather than telling could be applied to the whole movie for that matter and it would be easily improved.

The Story of 90 Coins has an effectively sweet message to go along with a surprisingly heartfelt relationship.  We don’t get too many earnest, heartfelt romance films that hit well anymore now that studios are focused on which superheroes will fight each other in their next movie rather than true characterization.  The film is also solidly acted, as both Han Dongjun and Zhuang Zhiqi give believable performances, a trait that often gets lost when dealing with actors in a short film.

Short films are an certainly an important stepping off point for people aspiring to work on large productions.  To help Mr. Wong even further, please click here to view The Story of 90 Coins on Vimeo.  If you’re a fan of the film, please click here and like its Facebook page.  The film is only nine minutes long so you can easily watch it during your daily routine.

Thanks for reading!  Do you want to see The Story of 90 Coins?  Comment below with your thoughts!

Thank you so very much for sharing this. I am enormous lover of Asian cinema,and I am always on the lookout for new movies. This story sounds very original, and has already grabbed my attention. I really want to see this film, it sounds amazing. Once again, my thanks ?

You got it! The video in embedded within the review so take a look!

I did not even realise this. Just watched it and you are completely right about the cinematography, it looks as good as any big budget movie. The story itself was well done, and I loved that phrase at the end, which is so true ? All in all this was a great little movie,which would flourish even more when it would be developped into a full feature movie ? Thanks again!

You got it! Happy to help!