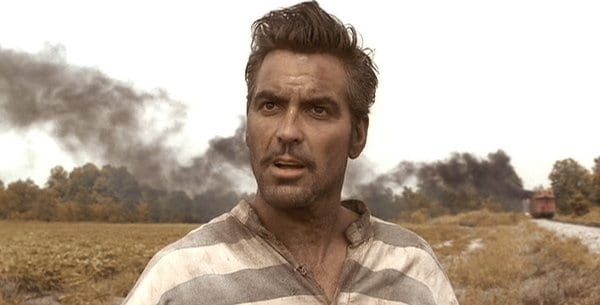 Over the course of his career, George Clooney has turned himself into one of the most recognizable names in Hollywood.  While he mostly pegged as a suave, stylish man in Hollywood, he certainly hasn’t been afraid to be a little kooky in some of his roles, as seen by his character in O Brother, Where Art Thou?, directed none other than by the Coen Brothers.  Because the film as a whole is loved by a select group of cinephiles, I made sure to check it out and look for its merits.  The following review will be spoiler free.

O Brother, Where Art Thou? is directed by the aforementioned Coen Brothers and stars George Clooney, Tim Blake Nelson, and John Turturro.

We follow our three lead characters as they escape from a prison chain gang in Mississippi.  Our three, daffy characters make haste in order to flee to freedom through the deep South and get back to their homes.  However, there’s a mysterious lawman on their tale, looking to bring the trio back to the prison. 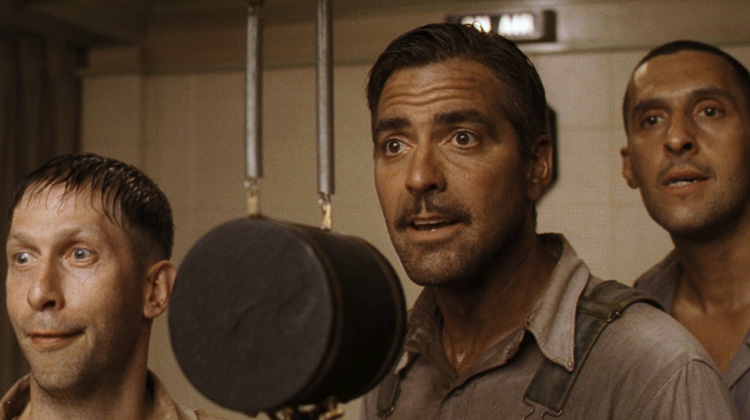 If you’ve been following MovieBabble for awhile, you’d know that I’m a big fan of the Coen Brothers.  Not only do they make great films, but they also continue to challenge themselves with new genres and styles, making each of their films a completely new experience.  In a time where originality has been pushed to the side in Hollywood, these actions are certainly worth praise.

The actual story of O Brother, Where Art Thou? takes it story beats from the famed story, The Odyssey, and injects a southern flair into it which could easily lead to fun as three silly men adventure throughout the south.  The title of the film is even a nod to the 1941 film Sullivan’s Travels, which depicted a filmmaker wanting to learn true suffering before directing an adaptation of a fictional book by the same name.  No matter how you looked at it, O Brother, Where Art Thou? is a film primed to have many themes that honor other prized works.

The first thing that sticks out when watching O Brother, Where Art Thou? is the clever writing from the Coen brothers and hilarious line delivery from the actors.  There are a few moments throughout the film where the Coens repeat dialogue with limited alterations in quick succession.  These moments require perfect synergy from the Coens and actors to make these scenes work effectively.  If the Coens don’t convey how to correctly deliver these lines or if the actors don’t buy in, these moments falls completely flat.  Thankfully, both groups are on their A-games and we get some very snappy dialogue that’s often laugh out loud funny.

The brunt of great line delivery comes from George Clooney in the lead role as Ulysses Everett McGill.  The Coens have such a talent for creating memorable characters, and Clooney is certainly one of them.  What the Coens do so well is give each of their main characters some type of quirk or trait that sticks with you.  From now on, when I think of O Brother, Where Art Thou?, one of my first thoughts will be of Dapper Dan (which will make much more sense if you’ve seen the film).  Unlike many of his other films, Clooney has a daffy, lovingly idiotic feel about him throughout this film that is incredibly endearing.

When watching the film, you can tell that Clooney completely let himself go to the role, even dancing around like a dummy later on in the film.  If you enjoy watching very famous people act against type, then O Brother, Where Art Thou? may be the film for you.

O Brother, Where Art Thou?, also has some very clever references to The Odyssey as mentioned above.  However, the mirror construction of plot can be a little distracting at times, becoming more frustrating than whimsical.  While I will refrain from discussing spoilers, there’s a pivotal moment in the film that leads to the group our three to turn into a group of two.  While it is a nice nod to the source material, it does not (in my personal opinion) translate well to the screen as it feels like a sharp contrast in tone to the rest of the movie.  This isn’t the only translational either, as the film on occasion struggles to be its own story but rather one large homage to other source material.

That being said, those without knowledge of The Odyssey can enjoy this film as the silly comedy it is.  Tim Blake Nelson will make you smile as Delmar O’Donnell, giving us a nice side character to riff off of George Clooney.  Although some plot elements feel recycled as the film progresses, we also get introduced to some other fun, zany side characters on our journey through the south, leading to some pretty hilarious moments.

O Brother, Where Art Thou? is a great example of what a comedy should be in that it doesn’t rely on toilet humor to receive shock laughs from the audience, but rather showcases snappy dialogue and fun situational humor while having a surprising amount at its core.  There is also a nice religious element that plays throughout the movie that I thought played very nicely.

Thanks for reading!  Have you seen O Brother, Where Art Thou?  Comment below and make your thoughts heard!

One of my favorite movies. The music, as mentioned in previous comments, is stellar. “Down in the River to Pray,” “Go to Sleep, Little Baby,” and, of course, “Man of Constant Sorrows,” sung by members of Union Station. Classic lines, such as “How’s my hair?” and “Damn, we’re in a tight spot,” and that scene in the movie house, “Do not seek the treasure,” and “We thought you was a toad!”

I think my favorite may have to be “Damn, we’re in a tough spot!” lol I cry laughing every time

Oooo, now I want to see this!

I’m not a huge George Clooney fan but love this film, the Coen brothers are very clever and have made some excellent films, they always get the characters and actors spot on.

I’d have to agree! It seems like they also get the performance they need in a movie!

I am currently taking a college course on the Coen Brothers and this film is coming up for us. I’m excited to see it now!

University of Wisconsin. It’s interesting seeing what the Coens are inspired by for their films.

That sounds pretty awesome. I currently go to school at William and Mary and we don’t have anything like that in our class offerings

I was surprised to find it in our course catalog. We won’t even get to all the Coens films in the semester, but we watched some influences like The Glass Key for Miller’s Crossing and such.

I’m with James. It’s the music that has stayed with me. I loved the film on first viewing, slightly less so on repeat viewings – some of the weaknesses you pointed out become more apparent I think. But I still love the music and listening to it pulls me back into the world of the film. Those sirens in the river! The Coens are masters at creating a sense of place.

The song is pretty great! I keep picturing that last song scene in head!

I love the music in this film. Alison Krauss, Norman Blake etc. Must have watched it a hundred times growing up, Thanks for the review!

You got it! Always happy to please a reader!

I’m a Coen brothers fan, as well, and this movie helped cement a place for them in me. Great review. Cheers

I lost it when John Turturro started doing his stupid little dance at the end lol. The Coens have such a knack for creating such quirky scenes

Oh, yes. I grin when I remember that dance, and I lose it when I see it. Yes, they’re wonderful with identifying human quirkiness as reveals that we identify with in ourselves and other people.

Totally agree. Now if you excuse me, I need to go out and buy some more Dapper Dan for my hair…