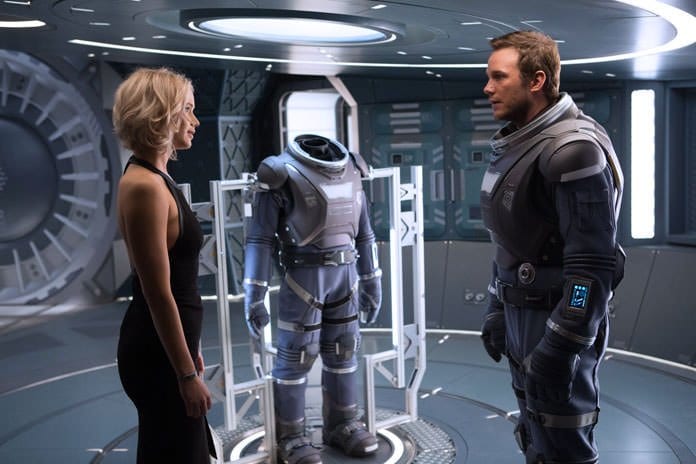 This week at the theaters brings us a space movie entitled Passengers!  With such star power involved such as Chris Pratt and Jennifer Lawrence, the movie could be a big hit if made correctly.  So I made sure to rush out to the theater to take a look for myself.  The following review will be spoiler free.  Make sure to comment at the bottom of the page with your own thoughts.

Passengers is directed by Morten Tyldum and stars Chris Pratt and Jennifer Lawrence.  The film follows the journey of the Avalon spaceship in the middle of a 120 year journey to a new planet for colonization.  Throughout the entirety of the journey, each of the 5,000 passengers are supposed to be in continuous hibernation.  However, problems arise that force Jim Preston (Pratt) and Aurora Lane (Lawrence) to wake up approximately 90 years too soon.  As they try to figure out how to fix the issue, other issues on the ship begin to materialize.

When I first heard that Passengers was going to be released, I immediately became interested due to Chris Pratt and Jennifer Lawrence.  One can argue that each are among the most fun, charismatic leads in Hollywood.  Then when a great director like Morten Tyldum gets added to the mix (his last directorial effort being Imitation Game), it seems like Passengers is destined to be a box office smash.

However, as the marketing for Passengers began to roll out, I became confused as to what type of movie it would become.  The posters for the film just show the faces of Pratt and Lawrence and nothing else.  While they’re definitely two attractive people to put on a poster, it tells us absolutely nothing about the film.  Then, the trailer for the movie was released and had elements of a romantic comedy, a thriller, and a space opera all rolled into one.  Other promos for the film set up the movie to have some major twist at the end while others played up the relationship between Chris Pratt and Jennifer Lawrence.

With all the conflicting marketing, I started to get concerned that movie does not know what it wanted to be, which can lead to very uneven and disappointing results from abrupt shifts in tone.

After seeing Passengers, I can say that I was partly correct in my reservations about the movie.  But fortunately for us, Passengers can still be fun.

I need to first start off with the performances of Chris Pratt and Jennifer Lawrence since the film rests completely on their shoulders.  Each of them do a really nice job in Passengers, giving us all the charisma and likability that we’ve come to expect from them.  They have wonderful chemistry together, leading to a very believable romance between the two which is at the forefront of this movie.  If their romance wasn’t convincing, Passengers could have been a dumpster fire.

The first act of Passengers is set up very nicely.  Pratt’s character is given a well thought out moral dilemma that makes you wonder what you would do in his predicament.  Passengers even has a Castaway in space vibe for a little bit, giving Passengers a feel of being a small movie in a large movie’s body which I appreciated.  A stand out of the film is Michael Sheen as a robot named Arthur.  He’s the bartender on the ship and offers some very humorous lines as well as some advice for Pratt.  He adds a nice little element to the film that may have become stale rather quickly without him. 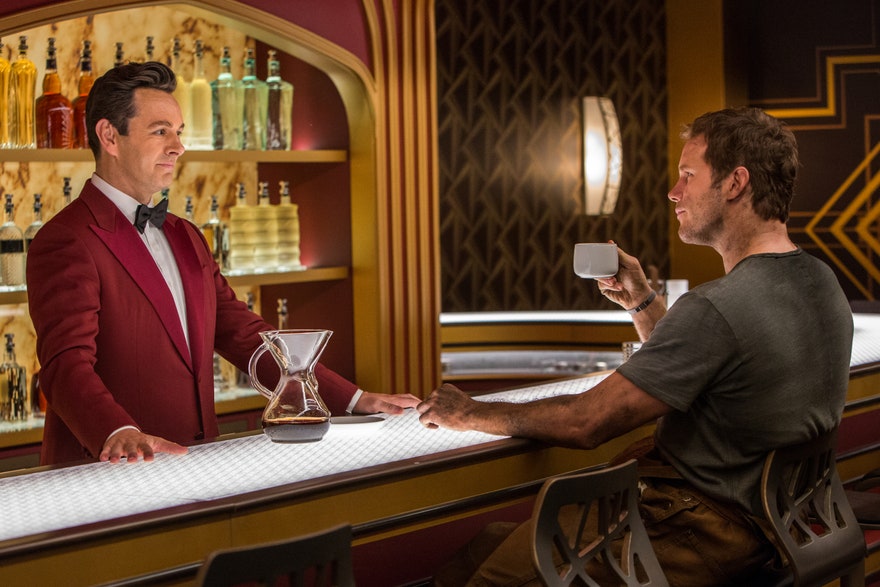 However, Passengers suffers from a very slow moving plot.  There’s a lot of filler and fluff within the story that bloats the run time to approximately two hours when it should be closer to an hour and a half.  The real plot of the movie is an afterthought in the movie until the last 20 minutes or so.

Passengers as a whole is also very predictable.  This marketing of this movie is incredibly misleading in that aspect.  There is no major twist to the movie that flips the movie on it’s head.  It’s a very paint by numbers plot that does not break any new ground because of it.  Opinions of the movie may skew negatively since many people might go into the movie with different expectations of the film.  It largely focuses on the romance between Pratt and Lawrence with some special effects thrown in from time to time (which are pretty solid I must admit). Overall, Passengers is a paint by numbers movie with two very likable leads that make the film marginally enjoyable.  I see this movie being a solid cable watch in the future.  It’s harmless and is a decent amount of fun.  I’ll give Passengers a C+.  If you’re a fan of both Chris Pratt and Jennifer Lawrence, then you’ll most likely leave the movie somewhat pleased.

Have you seen or do you want to see Passengers?  Comment below at the bottom of the page with your thoughts!

Thanks for this review. I’ve heard similar remarks about the movie in other sources, and I’m disappointed.
Thanks for following Oh, the Places We See! Although we love traveling, we also love staying in Knoxville and going to the movies at our favorite art house theatre. Love thinking about acting, sets, directing, dialogue, etc.
Best wishes to you for a successful 2017!

Same to you! I’ll do my best to help both of you out!

Thank you for your recent follow of my blog!

The moral dilemma of Chris Pratt about the awakening of the blonde was well given, in my opinion.

Great review. I’m disappointed. I had high hopes for this movie but keep hearing nothing but bad news. Such a shame

I agree with the things you said about what kind of movie this was supposed to be. Glad I am not the only one who thought that. After reading your review I am going to save this one for the dvd release. ?