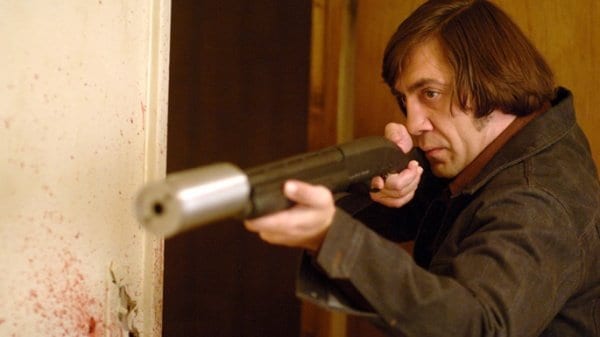 With the Academy Awards airing this weekend, let’s take a more-depth look at 2007’s winner for Best Picture, No Country for Old Men!  So that you can watch the movie for yourself on Netflix, the following review will be spoiler free.

No Country for Old Men is directed by the Coen Brothers and stars Josh Brolin, Javier Bardem, and Tommy Lee Jones.

The film follows Llewelyn Moss (Brolin) who uncovers a drug deal gone horribly wrong in the Texas countryside.  After uncovering two million dollars among the dead bodies, the film turns into a game of cat and mouse between Moss and the Anton Chigurh (Bardem), a mysterious killer that determines the fate of his victims with the flip of a coin.  All the while, an older cop, Ed Tom Bell (Jones), attempts to stop the escalating violence that is occurring as a result. 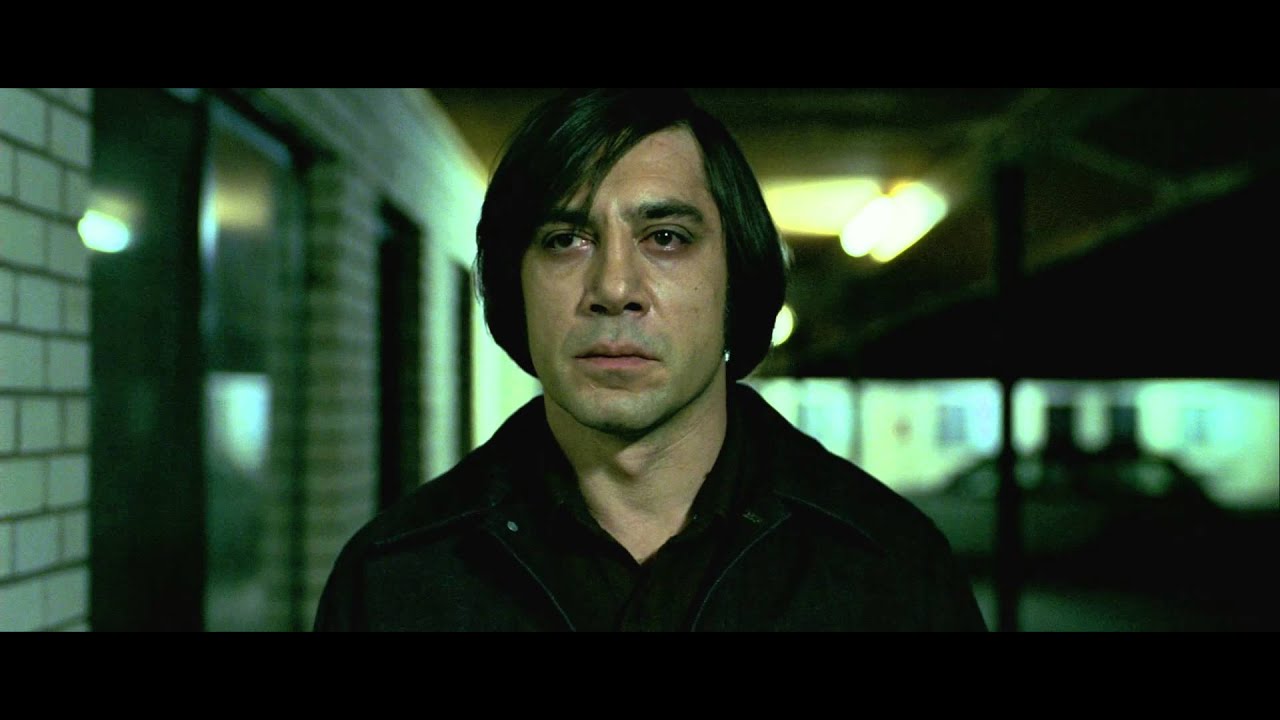 I’ve wanted to discuss a Coen Brothers’ movie for some time.  They’re easily two of the best directors working today, constantly tackling new genres of film that are equal parts original and intriguing.  Even when their movies don’t necessarily work (like 2016’s Hail Caesar!), there’s still a lot to appreciate inside their films like the typical snappy dialogue, well-written characters, and great pacing.  They’re incredibly original, something that can be very appreciated in an industry that lacks it.

As for No Country for Old Men, it came at just the right time as it followed The Ladykillers.  Many consider that film to be the worst in the Coens filmography.  Based on the popular book by Cormac McCarthy, critics acclaimed that No Country for Old Men was a welcomed return to prominence for the Coens with some even calling it the finest film the duo has ever made.

Although the film is widely acclaimed as perfection, critics have gotten it wrong before.  So is No Country for Old Men worth all its praise?

The first discussion piece (and quite possibly the most obvious) is performance of Javier Bardem as Anton Chigurh.  This man was born to play a villain in film.  Bardem has the uncanny ability to lose any type of expression in his facial mannerisms, which plays very well in No Country for Old Men‘s dark story line.  Bardem loses himself in this role, ridding himself of any expression or humanity as he stealthily creeps around with his cattle gun.  Chigurh fully becomes this unstoppable evil and legitimately becomes a psychopath for two hours on screen.  The character’s signature coin flip accounts for one of the creepiest scenes in cinema of recent memory.  Bardem may have created one of the best villains of all-time. 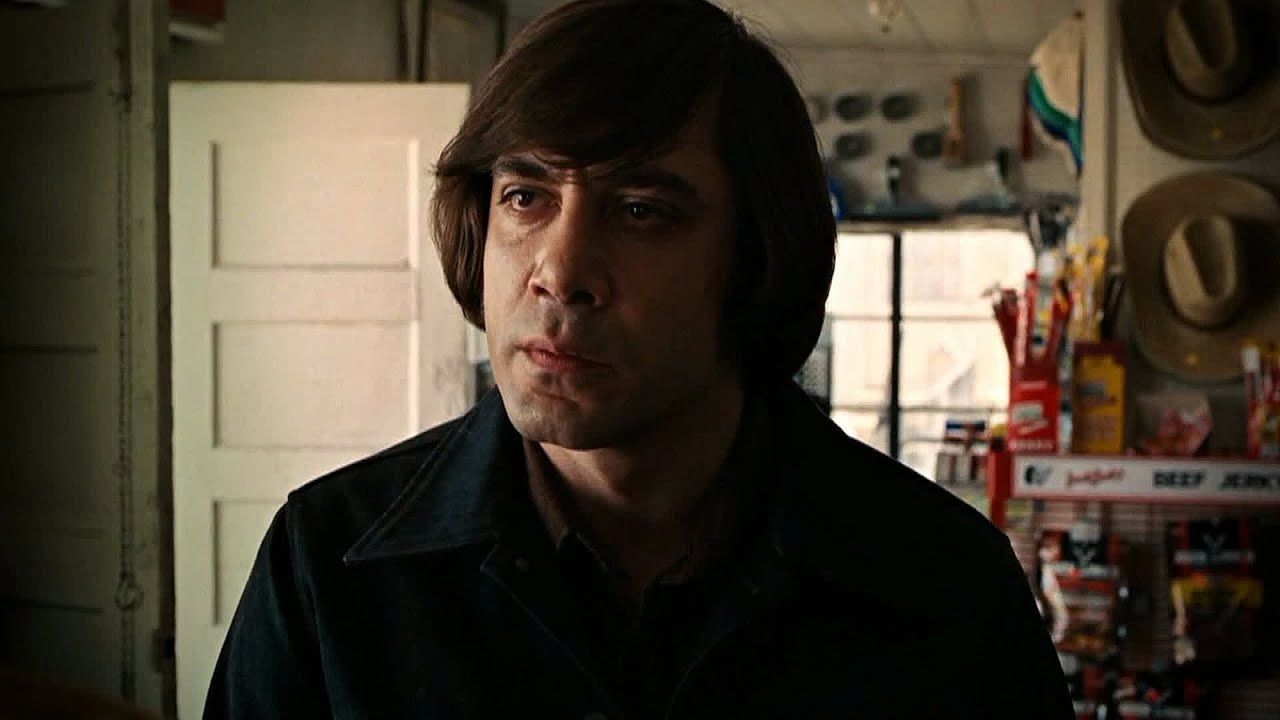 However, one of the choices that the Coen Brothers made with this movie is that is has no score.  This choice adds to the bleak nature of the film, giving No Country for Old Men its dark and disturbing feel that lingers on after the end credits hit the screen.  While it doesn’t make for the most enjoyable movie experience, it provides a very lasting effect.

It also allows for tension to overwhelm each scene.  Since there is hardly any ambient noise in the film, you as the viewer are locked into every movement that the characters make, which, in combination with the unemotional, ghostly movements of Javier Bardem, have you on the edge of your seat, praying that Josh Brolin escapes in the nick of time.  Utilizing no score may be the most intelligent decision made in the making of this movie as it perfectly sets up the movie’s scenes. Where the Coens truly shine in this film are the themes that they were able to translate from Cormac McCarthy’s book.  The meaning of the title of the movie is seen in Sheriff Bell’s character, who inexplicably becomes the main protagonist.  No Country for Old Men tackles the idea of a person’s place in the world and how one realizes that they cannot keep up in their desired role in society.  Tommy Lee Jones is always one step behind, accenting his frailty.  Although, as humans, we strive to be the best version of ourselves, sometimes that just isn’t enough to accomplish the task.

As mentioned above, the film further explores the idea of escaping impending doom which realistically, isn’t possible.  This concept may sound like a bit of a downer, but it is very well-realized on screen.

No Country for Old Men may not be the movie for you if you are looking for a lighthearted, feel-good movie.  However, it’s a loaded, tension filled movie that is masterfully crafted from the Coen Brothers.  It absolutely gets an A+.  If you haven’t seen the movie yet, make it your priority to stream it the next time you’re on Netflix. Thanks for reading!  Have you seen No Country for Old Men?  Comment down below with your thoughts!

[…] may be a controversial opinion, but O Brother, Where Art Thou? is the Coen Brothers’ best […]

I had to take two attempts to watch this. I’m not a fan of psychopathic violence in film (or in life, for that matter) and I had to talk myself into watching this. I’m glad I did, even though the subject and portrayal is intrinsically awful. It’s a good film to me because it made me think. What I came away with at the end was that Badem’s character was ultimately a coward, and a bully. Something about this film reminds me of ‘In Cold Blood’, which I’ve both read and seen, in the way it (I feel) dissects the actions of a killer who has no conscience or reason what so ever. In regards to the Coen brothers, I’m not necessarily a die-hard fan, but they have made some good films, some of them silly and funny like In China They Eat Dogs (is it called that in English? I’ve only seen the German version.) The Cray Brothers was another good one.

I believe that In China They Eat Dogs comes from a different director no? I don’t who knows lol. Thanks for sharing!

Great review. I also loved this film though I haven’t reviewed it as I watched it before I started my Fillums blog. I felt that the Chigurh character was a metaphor for the consequences of your actions. They’re inevitable, inescapable and dispassionate.

I’d have to agree with that one! This movie is definitely pure poetry in motion

Hey. Liked your review! Was wondering which one you think is gonna win the best picture? I really liked Manchester by the sea and Arrival. But I bet La La Land is gonna win

I think La La Land will probably win. It’s a great movie that’s also about Hollywood and the movie industry which the academy LOVES at the Oscars.

Did you review Moonlight?

Fantastic film, with great performances. Just one of those movies that you can watch over and over again: it just never gets old ?

I would love to hear your thoughts on the Coen’s first movie Blood Simple. Or a ranking of your favorite Coen brothers movies.

Hmmm…I might have to take you up on that sometime soon!

I saw this movies recently and was blown away by it. It was strange, but in a good way. And fun fact; you said Javier Bardem was born to play a villain. Well, he played another villain in the James Bond movie Skyfall. Just a funny trivia piece!

That’s kind of what I was alluding to when I said that! He always brings it!

Hehe…that makes sense! But he does play AMAZING villains!

Looking forward to his next villainous role in Pirates of the Caribbean 5!

Ooh…didn’t hear about that. Cool! He’ll do a good job.

One of my favorite movies ever. I never get tired of it, even after a dozen watches. Certainly a modern masterpiece.

Easily one of the best Westerns of recent memory!

Agreed! Did you see Hell or High Water? It’s another well made modern western masquerading as a heist film.

I need to see it! It left theaters right before I started reviewing movies so I missed it.

You will LOVE it

That’s what it seems like. I’ll make sure to see it soon!

This was such a great movie. I love the Coen brothers.

Every single one of their movies is a must see!

I agree! Have you seen Fargo on FX?

It is, especially the first two seasons.