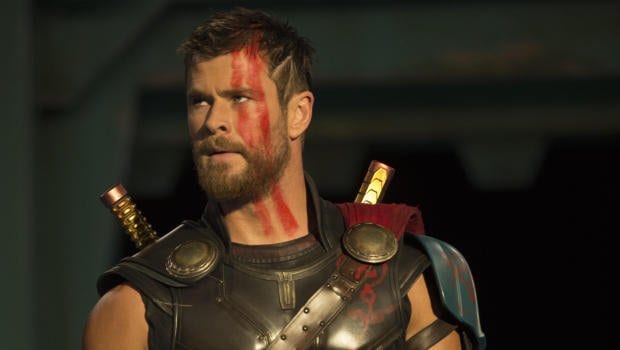 Marvel will be very busy in 2017 with the release of three news films to the Marvel Cinematic Universe.  We’ve seen some footage for each of the films except one: Thor: Ragnarok.  However, early Monday morning, Marvel surprised us all and released the first Thor: Ragnarok trailer online for all of us to drool over.  Let’s take a deeper look into the teaser that made us all squeal with glee.

From the official plot synopsis that Marvel released to the public, we know that Thor: Ragnarok will have serious implications for the universe.

After getting imprisoned on the other side of the universe, Thor is put into a gladiatorial arena to fight off various foes.  However, Thor quickly learns that must face off against fellow Avenger, the Incredible Hulk.  While he attempts to survive the fight in the ring,  the nefarious Hela is working to destroy his homeland and Asgardian civilization.

The trailer hints at this story line while adding the infectious Led Zeppelin tune, “Immigrant Song.”

The first scene we get, that of Thor dangling in a dark area while tied with chains, contains a nice possible twist to the Marvel formula.  The trailer starts with Thor posing us a possible question about how he ended up in this position.  If the film uses this template, we’ll most likely jump backwards in time after the film shows this moment, giving the film a nonlinear framework.  This speaks to the sentimentality of director, Taika Waititi.  This man has had filmed some insanely quirky, funny movies like What We Do in the Shadows and Hunt for the Wilderpeople.  My hope is that Thor: Ragnarok will have some strange and oddly funny directorial choices to make the film feel like it has a voice, which some Marvel films have failed to do in the past.

That led to the next scene…

SHE CAUGHT THE HAMMER!!!!

Any time great talent gets added to an established property, I immediately get excited.  This was the exact feeling I got when I saw that Cate Blanchett was going to be the main villain for the film.  Thankfully, this trailer only added to my excitement as Blanchett’s Hela looks like she may be a worthy villain that the MCU has sorely missed in its previous films.  The trailer dropped enough of a bomb by having her catch and smash Mjolnir.  But then, it goes even further by showing her take on the entire Asgardian army.  It’s probably a safe bet that she’ll be a better adversary than Malekith in Thor: The Dark World.

What really bodes well for Thor: Ragnarok to be a great film is the growth of Thor as a character.  It’s always been somewhat difficult for us to relate to Thor with him being a God and everything.  From what we’ve seen in the Ragnarok trailer,  the film will strip him of everything, making him more human and realistic by our standards.  Forcing Thor to grow as man without his hammer or throne could give the film an added edge that we may latch on to.  Plus, look at that short hair.  How manly!

The film also seems to be plugging into Chris Hemsworth’s comedic side, bringing the tone of the film closer to Guardians of the Galaxy, a trait that I most certainly can get behind.  Hemsworth has proven to be a funny fellow in the past, so adding that sentimentality to a more whimsical, Star Wars-esque landscape may really make this film soar.

Last but most certainly not least, who isn’t excited for the Thor vs. Hulk battle royale?  Fans have been screaming for the Planet Hulk story line for years.  It seems like that is finally starting to pay off.  Considering Thor won’t have any extra bells and whistles to help him out, this fight should definitely be interesting.  It’ll probably be worth the price of admission.  Just look at that shot:

How long do I have to wait for this movie again?  November?  But I want to see it NOW.

The Thor: Ragnarok trailer is pretty fantastic.  From the crazy scenery to the fun characters, the film will seemingly serve as a fun escape for many moviegoers.  Plus, anytime you add some Led Zeppelin to a trailer you know it’s going to be popular among fans.

However, the most intriguing moments of the trailer are the bits that hint at changes to the typical Marvel formula.  We could be in store for a very weird and different film.  Last time I checked, the last time Marvel got really weird with its film was Guardians of the Galaxy.  And that turned out well for all of us.

It’s too bad we have to wait until November 3rd, 2017 until the film is released to the public.

Thanks for reading!  Are you excited for Thor: Ragnarok to come out?  The comment section is now fixed, so please comment down below to keep the conversation going!

If you enjoyed this article, make sure to subscribe to MovieBabble via email to keep up to date on all future posts.

i am psyched up for the new Thor movie.

I’d like to think we all are considering what we’ve seen so far!

I found the trailer very entertaining and different from any Thor movies. I liked that they are taking a chance to go this direction and I am definitely excited, seems unfortunate that we will have to wait until November to watch it.

I know I want it now! lol

The comment section is now fixed…so that was what it was. I had tried to comment on a number of posts, and saw that I could not respond anymore (I honestly thought that I had said something wrong and was blocked or something like that lol ?). As for this trailer, it was seriously cool. This looks like it is going to be the best Thor movie so far, and that Hulk scene was seriously off the charts! ??

Lol I’d never block you! I just had a security plugin that wasn’t allowing comments to get through, so I had to update that and reconfigure everything. Hopefully it won’t happen again, I missed talking with everyone! lol