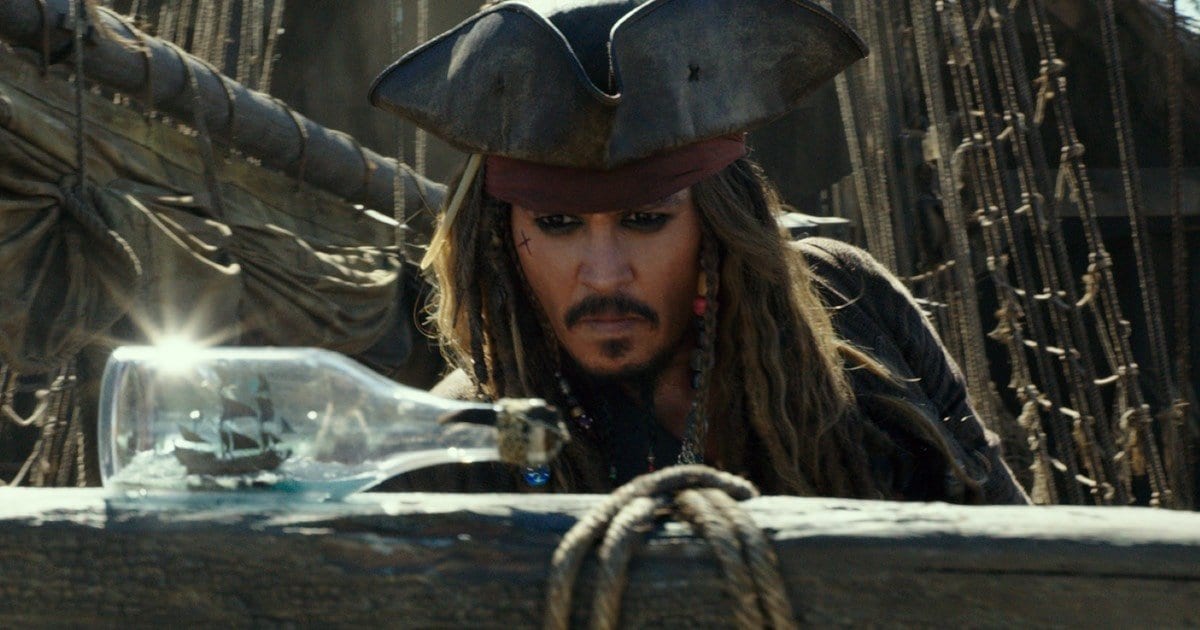 Fourteen years after the release of the original Pirates of the Caribbean, the bumbling masters of the sea are back in the fifth installment for the franchise, Pirates of the Caribbean: Dead Men Tell No Tales!  Could the latest Pirates movie inject some new life into the franchise?  Or would it fall flat on its face like its predecessors?  The following review will be spoiler free.

Pirates of the Caribbean: Dead Men Tell No Tales is directed by Espen Sandberg and Joachim Ronning and stars Johnny Depp reprising his role as Jack Sparrow along with newcomers Javier Bardem, Kaya Scodelario, and Brenton Thwaites.  The film follows Jack Sparrow who is down on his luck, becoming more of a drunk than he has been in the past.  Following a series of strange events, the evil Captain Salazar, a former foe of Sparrow, is freed from the Devil’s Triangle along with his crew in order to seek revenge against Jack and all other pirates.  In order to defeat Salazar, Jack and his crew must enlist the help of young Carina (Scodelario) and Henry (Thwaites), both of whom has ties to his past adventures. 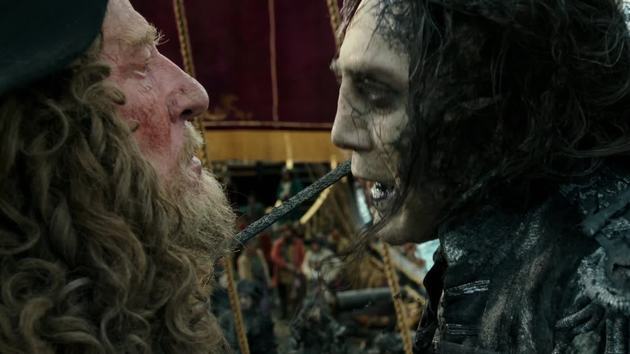 image via Pirates of the Caribbean

Six years after the release of On Stranger Tides, many questioned why Disney was going back to well one more time for another Pirates film.  The easy response was one word: money.  Despite a less than ideal Rotten Tomatoes score of 32%, On Stranger Tides still managed to gross over one billion dollars around the world, almost guaranteeing that a fifth movie would be released at some point.

Disney initially wanted to film the fifth and sixth films in the franchise back-to-back, telling members of the cast of On Stranger Tides to keep their schedules clear for the extensive project.  However, Disney failed to find a script that was worth telling on the big screen, delaying the films multiple years because of this issue.  Finally, executives decided to make only a fifth film with the possibility of returning for a sixth movie down the road.  This caused serious rewrites to the script once again.  Even Johnny Depp himself gave some input on a version of the script.  But did all this work translate to a solid finished product?

Like any famous score, as soon as you hear the original Pirates tune once again, Dead Men Tales certainly becomes quite lively.  Although the opening action sequence is more preposterous than anything from the Fast and Furious franchise, the main theme still allows you to have some fun.

There’s a disarming quality about the Pirates theme that Hans Zimmer and Klaus Badelt created so many years ago.  It’s whimsical nature subconsciously loosens you up to what’s unfolding onscreen.  There are many moments in Dead Men Tell No Tales that are patently ridiculous and would normally turn people off to the film altogether.  But that beautiful music gets into your head and you can’t help but crack a smile.  Fourteen years later, the score hasn’t lost a single bit of its luster.

Dead Men Tell No Tales is also pretty spectacular from a visual standpoint.  The budget for this film is well over $200 million, and you can certainly tell that it went to good use.  Javier Bardem’s Captain Salazar has a very cool CGI-effect, causing his hair to appear to be floating, which works perfectly with his ghostly appearance.  There’s even a very neat visual effect used to de-age Johnny Depp’s Jack Sparrow which looks surprisingly realistic.  All the outside features that accompany the heart of Pirates are very solid, which would have you think that the film was setup to do some great things.

However, it seems that the fifth installment of the franchise has ran out of new ideas.  Stop me if you’ve heard this before: an undead captain and his crew look to get revenge from something that Jack Sparrow did to them in the past while Sparrow recruits others and attempts to reclaim his crew and his ship to prepare for battle.

Dead Men Tell No Tales is a reheated, melding together of the previous installments wrapped up into a less than satisfying adventure.  All the pieces are here.  All the pirates are being ridiculous.  Javier Bardem’s Salazar is convincing when giving the time to shine.  Hell, even the supporting cast led by Kaya Scodelario is pretty convincing.  But there’s something incredibly flat about this film that makes you feel a bit underwhelmed.

One of the main causes for this disappointing feel is the film’s serious pacing issue.  After the absurd set-piece to start the film, the film halts to a stop soon after that it never truly gets out of.  It attempts to regain its audience by ending with an absurd final act that ends in serious schlock, but by then many will already have tuned out.

Gone are the days where Jack Sparrow is a character of substance.  Johnny Depp has clearly lost all of the mojo that made Jack Sparrow a beloved character.  There is no more nuance, just dumb gags that occasionally have some payoff.  Sparrow is a complete caricature of the pirate that we all fell in love with in The Curse of the Black Pearl.

Although Sparrow was still patently ridiculous in the most beloved film in the franchise, there was still a bit of humanity for us to latch onto.  However, that character has since devolved into a drunk that really has nothing special about him.  He’s really only there to mosey around and accidentally miss destruction that plays for a flimsy joke. 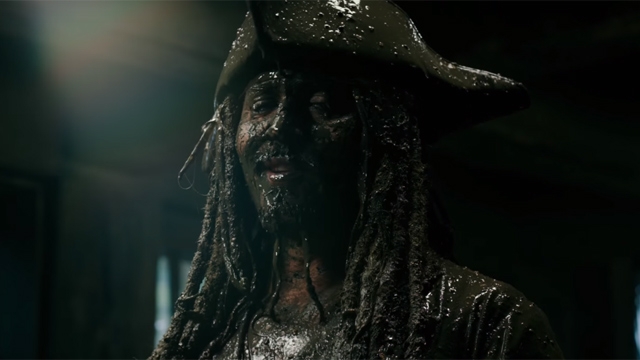 Dead Men Tell No Tales is certainly not a dumpster fire, but it lacks anything of note to make it worth watching in theaters.  It gets a C-.  If you are a massive fan of the Pirates franchise, you might some enjoyment in this film.  However, those who have found the previous installments to be a bit of a slog will not have a change of heart after seeing this film.

Thanks for reading!  What are your thoughts on Pirates of the Caribbean: Dead Men Tell No Tales?  Comment down below with your thoughts!

[…] falling only a handful of million short of the record, which is currently held by *squints* Pirates of the Caribbean: On Stranger Tides…? (If you’re currently saying something like “Jesus Christ, really?!”, don’t worry, so […]

Very interesting and detailed review.Although I’ve already watched this movie, it was nice to read someone else’s opinion on it.Good job!

Thanks so much! That’s one reason I like reviews!

Nice review. I agree with you….the whole Jack Sparrow persona shtick has lost its edge. Its good to see Depp still playing (and having fun in the role), but the whole character has lost its substance.

I was talking with another person in this thread about how they should move on from Sparrow if they come back for another movie. It might make a more genuine film

I feel the film is fine. As you say, it is an unexceptional film. It has some fun to it but it is sporadic and not consistent. Some of this is just that Jack is a sorry character. While he does have flashes of humanity here and there, his narcissistic approach to everything in his life makes him a character I struggle to root for. Each time he seems to redeem himself (saving Will from death and killing Davy Jones in At World’s End, tricking Blackbeard into drinking the wrong goblet so as to save his daughter) he comes back with a bigger bumbling routine. That said, I really liked a lot outside of Jack. Geoffrey Rush as Barbossa is always a treat. Javier Bardem played Salazar perfectly. And Kaya Scodelario and Brendan Thwaites had good chemistry as Carina and Henry and lent the story a lot of heart with their interlocking themes of fathers. And I wouldn’t mind weeing Will and Elizabeth return for a sequel with Carina and Henry alongside. Maybe we can just push Jack overboard and let the series get back to being a fun swashbuckling adventure.

I thought about that after watching it. The rest of the cast was very pleasant and fun to watch. Although I wonder if the film would prove to be financially successful without Sparrow.

I feel like these big franchises are afraid to try something new in fears of losing money, so they stick to the same old formula that has worked before. But that’s not what makes a classic. Thanks for the review, I was wondering if I should go see it in theaters or wait a bit. Wait it is.

Glad to help! I totally agree with your assessment. There’s a lot of safe films being made recently

It won’t stop the film making a fortune. There are lots of children who don’t care about plot etc that will drag parents to see it over the halfterm holidays. Depressing really.

Mind you, the box office for most ‘new’ films seem to be struggling this year. I rather think high ticket prices are having an impact on impulse and casual cinemagoing in favour of waiting for home rentals or even illegal downloads/streaming. So maybe it won’t be a massive hit.

I see Covenant has been suffering an 80% drop this weekend in the States. Interesting times.

I think a lot of that comes from a small amount of great films and a lot of different options. You need good word of mouth in order for a film to have legs at the box office.

Why am I not surprised!

Lol we all probably shouldn’t be!