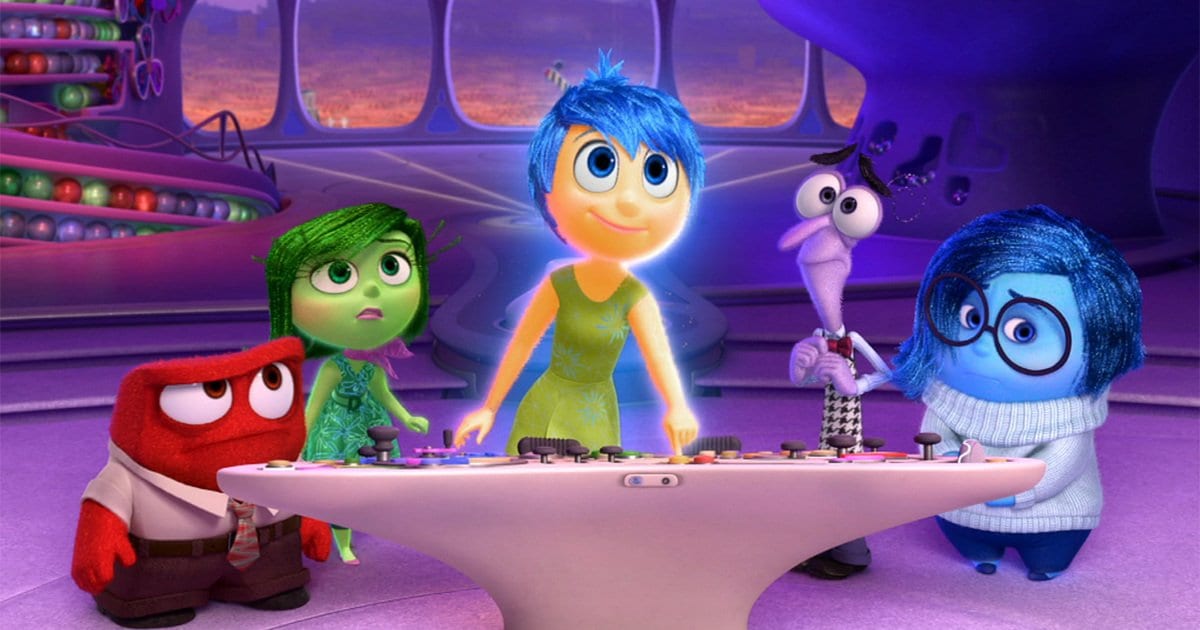 Pixar has continued to inspire all of us with their classic films that are beautifully animated and poignant.  With the next Pixar film, Cars 3, due out in theaters, let’s take a look back one of the best films that Pixar has to offer, Inside Out!  Many were shocked with the amount of emotion encased within this animated film, but does it still stand among the best Pixar films?  The following review will be spoiler free.

Inside Out is directed by Pete Docter and Ronnie Del Carmen and stars Amy Poehler, Mindy Kaling, Phyllis Smith, Bill Hader, and Lewis Black.  We follow the five main emotions (Joy, Fear, Disgust, Anger, Sadness) inside a young girl’s head.  The young girl, named Riley, is going through a troubling time in her life as her family moves across the country.  With these drastic changes comes chaos in the headquarters inside her head (led by these emotions).  Set on a journey through Riley’s subconscious, Joy and Sadness must restore a balance to Riley’s mind so that she can be happy once again.

During his younger years, director Pete Docter struggled to acclimate to new changes in his own life.  Once he had a child, he noticed a similar discomfort during a similar time in his child’s life.  He wondered what it would look like in the brain when these emotions took root in someone’s mind.  From there, he went and studied the human mind where he enlisted the help of the notable psychologist Paul Ekman.

From there, Ekman explained to Docter that he identified six core personality traits inside the mind of a human which Docter later condensed into five.  Luckily for Docter, he was coming off of the smashing success of 2009’s Up which gave him the freedom necessary to create a wholly original film for the hard working people at Pixar to bring to life.  And with that, Inside Out was born.

Inside Out‘s creativity is absolutely off the charts in just about every aspect.  Obviously, the world inside Riley’s mind is key to the enjoyment of the film.  Luckily, with Pete Docter’s past, we are able to gaze upon a fully realized world that has so many intricacies and finer points.  Each part of the subconscious has a clever spin that helps it to resonate with both children and adults.  If nothing else, you’ll be entertained by this films ability to be creative.

Inside Out has that rare feeling of nostalgia without actually being nostalgic.  Rather than propping up its story with funny, dated references with something that only a thirty year old might enjoy, the film focuses on what children go through during their early years with such conviction and heart that you as the viewer begin to reminisce about your own experiences.  The film conjures up those experiences that made you laugh (and cry) and gives you an entirely different perception on them.

Those feelings in combination with the creativity involved allow for Inside Out to be a wholly original movie-going experience.  While there are films that tackle a similar subject matter, none of them compare to Inside Out from an execution standpoint.

Can we talk about how well cast this movie is?

In order for an actor to correctly express a singular emotion for the entirety of a movie like Inside Out, you need people that embody those entities.  For example, you wouldn’t cast Denzel Washington to play the quiet, ever-sulking embodiment of sadness (although that would make for an interesting movie).

Casting directors never get enough credit for their work in Hollywood.  Without the correct people in place, a lot of movies would probably be drastically different.  Could you imagine anyone else besides Anthony Hopkins playing the part of Hannibal Lecter?

The best choice of all may be Lewis Black playing the part of Anger.  Black is mostly known for his belligerent comedic style where he simulates himself freaking out about many different topics.  So, when you add him to the mix to play an angry character, you know it’s a match made in heaven.

However, what Inside Out may be best at is causing its audience to have a cathartic emotional experience.  Animated movies have a certain disarming quality to them.  They relax all of us with their colorful landscapes and quirky characters that we are certainly not on guard when viewing them.  The best animated movies use this quality to their benefit and drop the hammer upon viewers, causing them to question the most philosophical struggles a person might handle.

Inside Out certainly has this quality, discussing ideas such as the fear of change and struggle of feeling alone in the world.  The film is “too real” in some circumstances, bypassing its fantastical nature in order to convey timely, necessary themes that may even bring you to tears if you’re not careful.

The best example comes from Bing Bong, Riley’s old imaginary friend that she has since forgotten about now that she’s older.  On its surface, Bing Bong is an absurd character that should only garner laughs from its silliness.  However, as the story progresses, we begin to realize his importance to not only the story, but also our past selves. 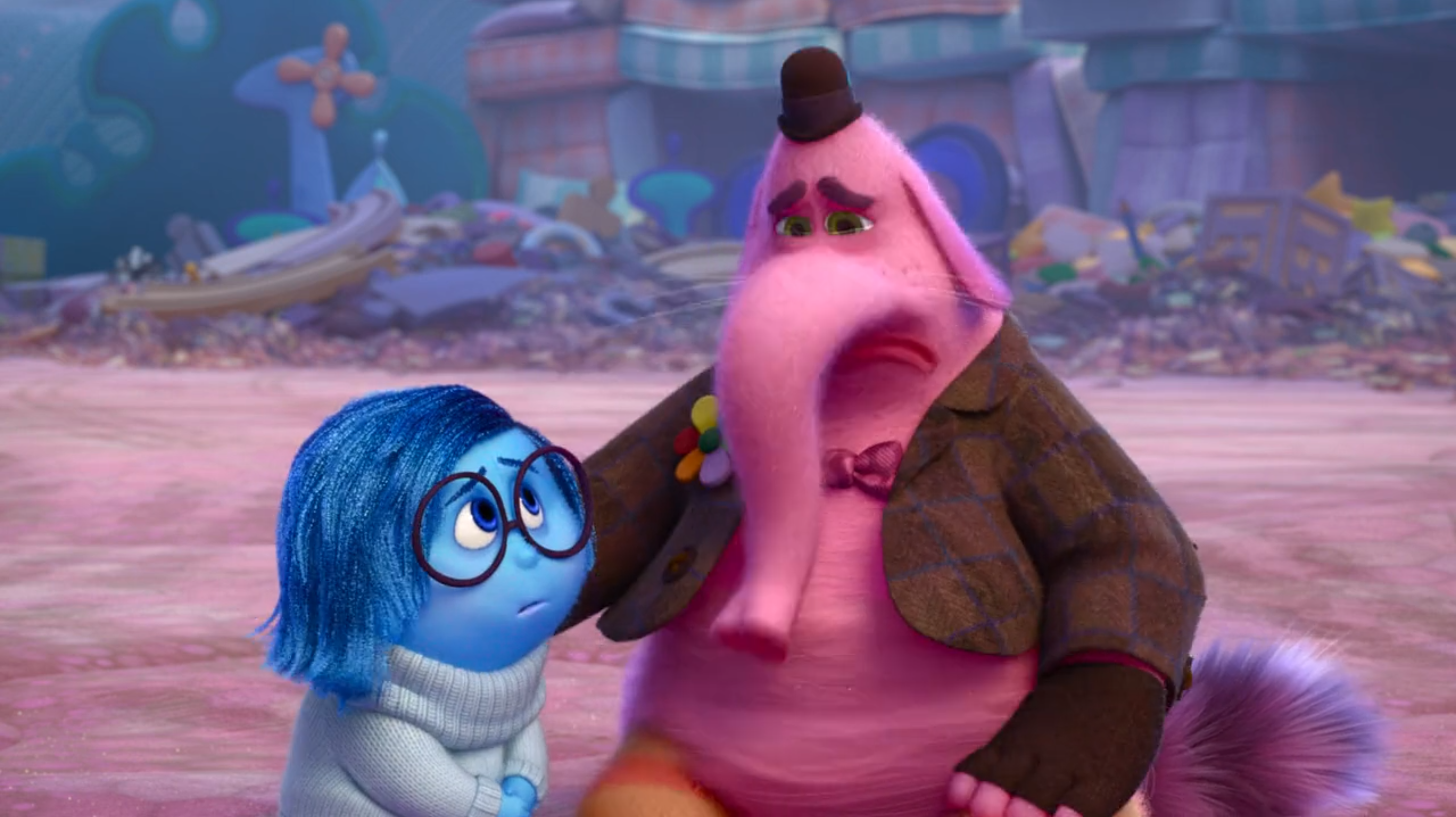 image via Empathy By Design

If Inside Out doesn’t make you feel even the slightest bit of empathy, then you’re obviously made of stone.

Inside Out is an obvious classic in the realm of animation.  Not only do kids enjoy the film, but adults can grasp an even greater meaning that hits them where they hold their childhood memories, either good or bad.  Obviously, it gets an A+.  This film is proof that animation is not just for kids.  Anyone can get a lot out of these types of films.

This is an excellent review! I love what you said about animated films being disarming. It is so true. Thanks for following my blog!

Couldn’t agree more. Who knew a “light” movie could be so heavy–and just plain moving?

That’s the thing about Pixar, a lot of their movies are disarmingly emotional!