An original premise takes a turn for the familiar. 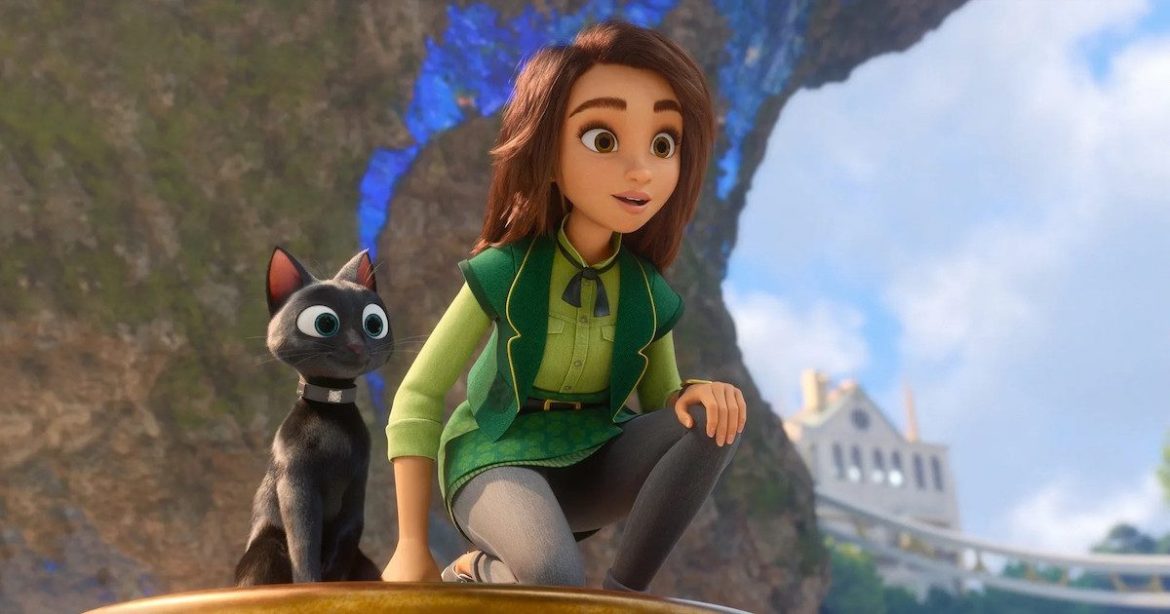 At its heart, the new Apple TV+ movie Luck is quite touching. The animation is cute, and the voice cast is impressive. There is a lot to like about it, really. Somewhere along the way, however, things get a bit convoluted. And borrowed.

In the beginning, Luck feels refreshingly new. We meet Sam Greenfield (Eva Noblezada), a young woman aging out of the foster system, and being forced out on her own. We get a bit of backstory on her that is quite heartbreaking. I teared up on more than one occasion during this section. Sam’s friendship with fellow girls’ home resident, Hazel (Adelynn Spoon) is sweet, and serves as motivation for her character throughout.

The thing about our main character, is her luck is awful. She lives a Murphy’s law type of existence, where everything that can go wrong usually does. Losing keys down a sewer drain, items falling apart in her hands, toast landing jam side down… you get the idea.

The only issue with this is, it’s really all we are told about Sam. She’s not all that fleshed out, apart from, “Hey, this person has bad luck, and cares about her young friend’s luck.” Yes, we get some back story about her never finding a forever home, but even that is attributed to her lack of luck. Bad luck does not a personality make. Being told, or shown, a bit more would help the audience connect to Sam. Toward the end of Luck, a character lists a bunch of personality traits Sam supposedly possesses, and it feels tacked on, rather than ringing true.

Is the Cat the Real Lead?

Sharing the screen with Sam for most of the film, is a talking black cat named Bob (Simon Pegg). Bob is a far more nuanced and compelling character. He is given more to do, and has more at stake, even though it’s not really his story. The writers seem to have dedicated more pages to developing Bob. If he were presented as the lead, that would make sense.

Inside Out, Meets Sing, Meets Defending Your Life

When our story jumps from the human world, to the world of luck (via a portal in the ground), it takes a turn. Things start to look, sound, and feel familiar. There are lucky pigs who look like Gunter from Sing, and a unicorn who has almost his exact accent and delivery.

The “moral of the story” seems to be lifted directly from the beloved Inside Out, as is a lot of the imagery. And I mean a lot. About halfway through the film, it became almost comical how similar it was attempting to be.

Another movie that came to mind while watching Luck was Defending Your Life, the Albert Brooks/Meryl Streep vehicle that was a favorite in my younger days. There is a lot about judgment, and sending characters to certain locations that feels familiar (there’s even a tram chase scene).

Essentially, anything original about this movie kind of faded away after the first act, and then things started to feel recycled. It’s also when the story feels a little murky, as if things were written on the fly.

During all this borrowing from other films, something is left out: the heart. All of the aforementioned movies pack an emotional wallop. That was not the case here, apart from the first 10 minutes, and the last.

This movie has some things going for it. For instance, the issue of foster children aging out of the system is an important one I was pleased to see addressed here. Not a lot is said about that in movies, especially of the animated variety. It was handled realistically and respectfully, which was refreshing.

Also in the plus column is the animation itself. Luck succeeds at making fantastical elements look fantastic, and cute side characters look cute (such a leprechauns and bunnies). Sam and Bob also have the classic doe eyes on which so many animated films have come to rely. It’s well put together, visually.

The score is also pleasant and effective, and provides the right atmosphere for the scenes. You can’t really ask for more than that from this type of film. It doesn’t need to be John Williams-level, as long as it works. And it does.

Musical theater star Eva Noblezada’s performance as Sam is quite good. Her singing is most impressive, but the dialogue is delivered well, also. She adds a certain charm to Sam that was lacking on the page.

Simon Pegg is a bright spot as Bob, the “lucky Scottish cat.” His line delivery makes certain jokes land that wouldn’t have in the hands of a lesser voice actor. Whatever works about this movie works, at least in part, because of him.

We also get to hear people like Whoopi Goldberg, Jane Fonda, and Lil Rel Howery along the way. All of whom fill their roles wonderfully. Casting went well, here.

While Luck relies heavily on elements from other films, it does get some things right. The music is lively, the overall look is charming, and the performances are stellar. It held my daughter’s attention, which isn’t easy to do, so I’d say the target audience was reached. I’m a bit outside the demographic, myself, but I had a good enough time. Were there flaws? Yes. But none were fatal.

Thank you for reading! What are your thoughts on Luck? Comment down below!