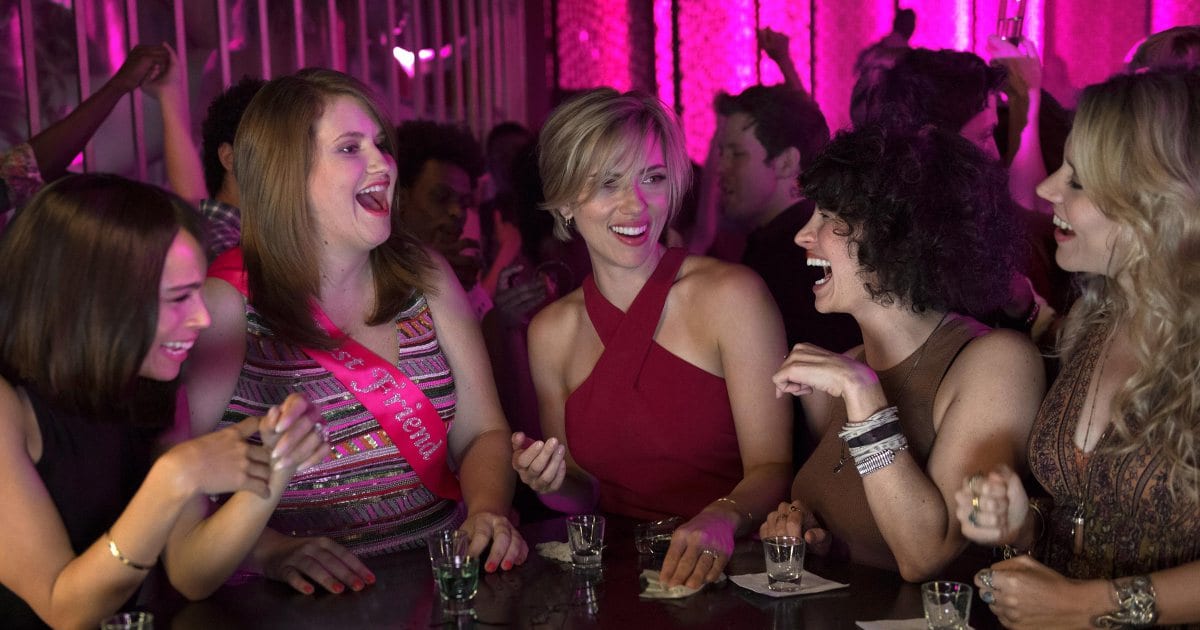 It seems like it’s been forever since we’ve had a great comedy get released in theaters.  However, Scarlett Johansson and company look to turn the tide with the next R-rated comedy with an all female cast, Rough Night!  The writers behind the very successful Broad City came on board to work on the film, but did the talent involved add up to a fun film?  The following review will be spoiler free.

Rough Night is directed by Lucia Aniello and stars Scarlett Johansson alongside Kate McKinnon, Jillian Bell, Ilana Glazer, and Zoe Kravitz.  We follow a group of friends that are reuniting for a bachelorette weekend together in Miami.  Upset that that they rarely see each other, they all want to have the best time possible.  However, things take a turn for the worse when the ladies accidently kill a stripper, leaving them to try to dispose of the body and avoid the police to the best of their abilities. Unfortunately for all of us, there hasn’t been a great comedy in a very long time.  Many films that appeared to have serious promise when the initial piece of marketing was released to the public have fizzled out at the box office and with fans.  Just this year we failed comedies such as Fist Fight, Sandy Wexler, Snatched, and Baywatch.  But is the end of unfunny films upon us with the release of Rough Night?

The film appeared to be angled for success with the previously mentioned cast involved with the film.  Scarlett Johansson can be in any film she wants considering her pedigree, so she wouldn’t choose to be in a film that could seriously tarnish her reputation, right?

At least the writers behind Broad City wrote the script for the film.  The undoing of a lot of comedies is subpar writing, so a solid creative team could go a long way for Rough Night‘s success.  Not only is Broad City very funny, it’s very intelligently written.  Sometimes screenwriters forget that wit and intelligence go a long way in creating a successful comedy.

As you can imagine from the cast assembled for the film, there’s a lot of solid chemistry between each of the main characters to enjoy.  Each of the five girls brings a different element to the film that works really well.

Lately she’s been starting to get on people’s nerves, but Kate McKinnon is the surprising standout of the film.  Mostly known for her outrageous characters that almost feel like cartoons, McKinnon has seemingly listened to her critics and dialed her energy down a few notches. 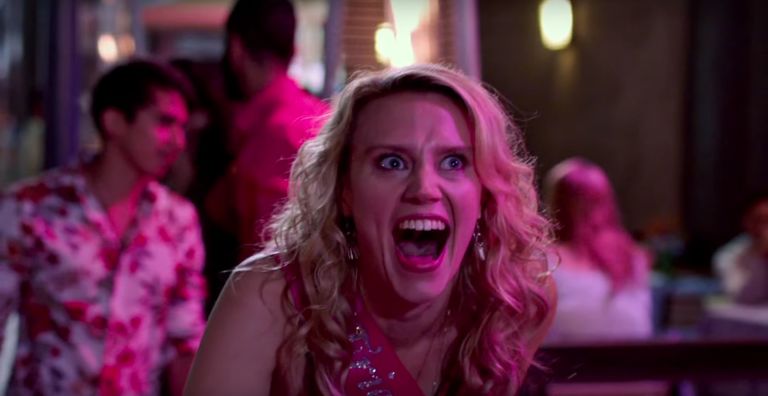 Does she still act ridiculous?  Of course, but is lot less in your face and actually blends in with the other characters.  Although her Australian accent is completely absurd, McKinnon has a genuine character that works more as an eccentric personality rather than a caricature.

This element of her performance allows for each of the five ladies to get thie shining moments.  As you can imagine from the premise, a lot of the jokes are situational.  However, it’s once the initial joke has been uttered that the other ladies pile on and add their own flavor to the predicament.  When the film attempts to be funny, it certainly succeeds more often than not.

No spoilers here, but theres a fabulous cameo in the film from a fairly prominent comedic actor and actress.  These two were responsible for a ton of belly laughs from the audience.  I can’t really expand on this without ruining the experience for you so I’ll have to leave it there.  Moving on!

The first twenty minutes or so of the film depict the events leading up to the death of the stripper.  Like you may expect, the film plays out like films such as The Hangover and Bridesmaids, showing the ladies doing drugs and other sorts of shenanigans.  However, after the stripper meets his demise, the film becomes rather dark with a drastic tonal shift.  Having a movie go dark isn’t necessarily an issue on its own right, but this tonal shift hurts Rough Night.

This darker turn initally helps the film, adding some hilarious situational humor to the mix.  However, after awhile, Rough Night forgets its comedic roots, making the movie fall pretty flat as a result.  Although it remains watchable, Rough Night clearly took all its best shots at the beginning of the film.  It follows the typical format of a comedy that gets exceedingly less funny once the plot has to develop.

Like many bigger studio comedies these days, Rough Night‘s plot includes a weird crime element that should not be there.  Obviously, there has to be some type of crime element to the film since a murder occurs.  I would be furious if the law didn’t get involved with such a predicament in a film.  However, the screenwriters added an additional element to the chaos that really overstays its welcome.

These days it seems like broad studio comedies find it necessary to tack on annoying endings that tie a bow on the entire movie rather than giving them a just ending.

Rough Night is certainly a step up from other comedic efforts put out in theaters this year, but it’s neither funny enough nor dark enough to navigate through its tricky tonal shifts.  This makes the film as a whole fall flat.  It gets a C+.  Unfortunately, Rough Night is pretty forgettable with its failure to do anything inventive with its seemingly fun premise.  You don’t need to rush out to the theater to see it.  Rough Night is destined to be a film that you lazily watch on HBO.

You were really kind to give this a C+.

I assume that you hated it lol

Lol I could definitely see why you might hate this film. It’s really a matter of taste in the end