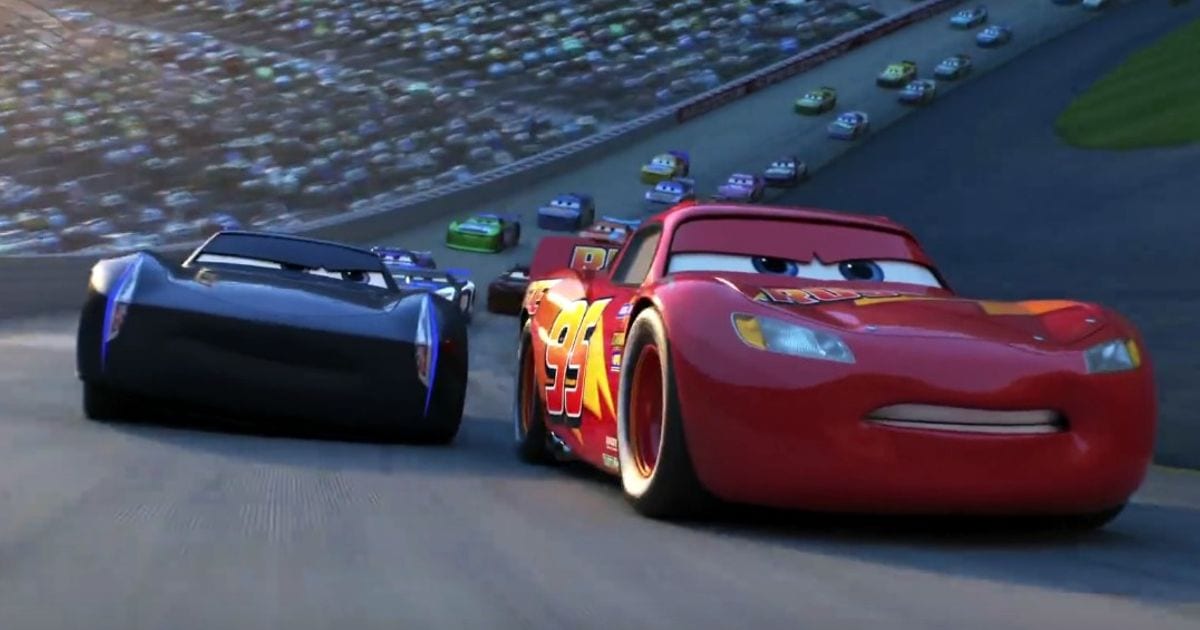 Pixar has continued to warm our hearts with imaginitive movies with glorious themes.  However, the Cars franchise seems to contain films that can only truly be enjoyed by kids, failing to cross over to other generations of moviegoers.  Pixar seemed to hear people’s complaints as the promotional material for the newest installment, Cars 3, was much darker in feel.  But can the film make good on that promise?  The following review will be spoiler free.

Cars 3 is directed by Brian Fee and stars Owen Wilson reprising his role as Lightning McQueen alongside other voice talents such as Armie Hammer, Kerry Washington, and Nathan Fillion.  Shocked from a wave of new talent in the sport, Lightning McQueen finds that his fame and success has suddenly been stripped away in favor for the younger, faster Jackson Storm (Hammer).  In order to once again be atop the sport he loves, Lightning must enlist help from new and invented avenues so that he can once again win the Piston Cup.

The main question on everyone’s mind leading up to release of Cars 3 was the following: do we even want another Cars movie?

The first two films haven’t been overly profitable at the box office, failing to reach $70 million in their opening weekends.  Moreover, Cars 2 was much maligned by audiences, with many calling it the worst Pixar movie.  To make matters worse, Cars 2 was released in 2011, making a sequel appear too late at this point in time to take advantage of the fandom for the franchise.

So that begs the question, why was this movie made?

That question can be answered in one word: toys.

Depending on where you get your information, the Cars franchise is only second to Star Wars in merchandise sales, making a third film an obvious business decision for Disney and Pixar.  When you look at the numbers, the box office results are only a small part of the equation in this instance.

But that’s not to say that Cars 3 can’t be as entertaining as it commercially viable, right?

As you might imagine from the animators over at Pixar, Cars 3 is absolutely stunning to look at.  With every passing film, Pixar seamingly has some new technology up its sleeve.  There are moments in this film that almost look real.  When you combine those moments with high-paced racing sequences, you have yourself a pretty fantastic film from a visual perspective that is sure to dazzle little kids.

Pixar has a fascinating track record of having a wonderful attention to detail within its films.  That trend continues with its latest film.  At times, you can even hear the tires of the cars create that crunchy sound that occurs when cars run over gravel on a dirt road.  You would never notice this trait if wasn’t included in the sound design, but it’s a nice detail that rounds out the experience.  Cars 3 is chock-full of little morsels like this one that really shows the time and care put into the product by everyone involved.

Pixar is the pinnacle of animation, and Cars 3 proves once again that these people are the best in the business.

Thankfully, it appears that Pixar has actually listened to the audiences for the second sequel.  As his character should be, Mater is once again a side character.  He offers the occasional comedic relief…and that’s it.  In my personal  opinion, this is the perfect usage of the tow truck.  This alteration is yet another example proving that Pixar understands its audience.

Unfortunately, the emotional beats of the film are fairly cold.  The first two movies in the franchise haven’t really helped in creating lovable characters.  To make matters worse, among the lead roles, there isn’t any voice talent in the film that stands out.

Think about your favorite Pixar characters.  Odds are that a lot of the love you have for these characters comes from the fact that the actor’s voice talent is 100% indispensible.  You have Ellen Degeneres as Dory, Tom Hanks as Woody, Billy Crystal as Mike Wazowski, and Amy Poehler as Joy.  Could you imagine any other actor in these roles?  I sure can’t.

Owen Wilson as Lightning McQueen is fine.  Armie Hammer as Jackson Storm is fine.  Nathan Fillion as Sterling is fine.  Everything about this film is just fine.  But, nothing about the characters gives the movie any juice.  Scenes just happen, then it ends.

Similar to the previous remark, Cars 3 has a serious problem with conflict resolution and narrative flow.

Throughout the film, Cars 3 has characters face their troubles in such a way that it tips off the resolution of said problem right from the start.

Although Lightning McQueen is facing mortality in the racing world, it never feels like he’s down on his luck.  He may be sad for a second or two, but that emotion is quickly undercut by a sudden realization or offbeat comment that wills McQueen back into good spirits.  This type of scene structure occurs many, many times throughout the film.  Not only does this make Cars 3 a little boring to watch, but it telegraphs where the story is headed, allowing the audience to be steps ahead of the movie.  By the time a story beat happens, the audience has already expected it to happen ten minutes prior.

Because of this quality, you become more focused on wanting the film to end rather than sitting back and enjoying the glorious animation.

Cars 3 is certainly finely crafted from a technical perspective.  Pixar is getting to the point where they are coming close to mimicking real life.  However, what Cars 3 lacks is the heart and imagination that makes Pixar the pinnacle of animation.  It gets a C+.  Kids will probably have some fun with this film, but adults may find their patience tested by an unimaginative narrative.

Thanks for reading!  How do you feel about Cars 3?  Comment down below with your thoughts!

I just can’t get myself excited to go see this and it may end up being only the second Pixar film I’ve skipped in theaters (the first being Monsters University).

Yeah i wouldn’t waste your money here. Nothing that isn’t worth waiting for on Netflix!