Teaser Trailer for Cars 3 Hints at a Much Darker Movie 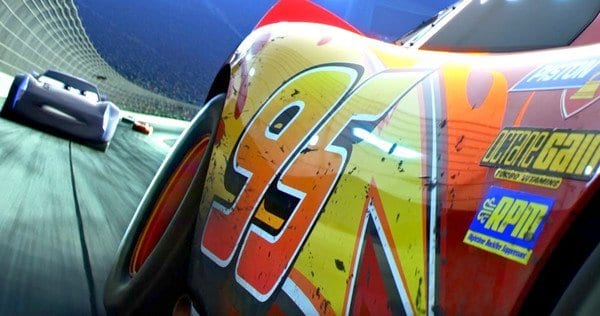 Disney released the first footage for Cars 3 on Monday to tease the sequel that will be coming out in the summer of 2017.  The 50-second trailer (which you can watch here on YouTube) shows limited story points, but says much about what we might see.  Owen Wilson is set to return as Lightning McQueen while Bonnie Hunt and Larry the Cable Guy will also be reprising their roles as Sally and Mater respectively.  The film will be directed by first-time director and longtime Pixar artist Brian Fee.

According to the official synopsis of the movie released by Pixar, the film will again follow Lightning McQueen, but this time we see him as he’s pushed out of the racing scene by new, up and coming cars.  In order to get back into the sport he loves, he must get the help from a new racing technician in order to get back into victory lane.

First off, I need to praise Pixar for the continued innovation of their visual effects.  The footage seen in the teaser trailer practically looks real and is absolutely an upgrade from the previous Cars movies.  One thing that is a constant about all Pixar movies, no matter the difference in story, is how beautiful all the films look.  The visuals ooze from the screen and only add to the visual experience.

The footage definitely hints at a darker tone, utilizing the cars revving their engines and heavy breathing sounds to make for a serious outing at the movies.  It also uses a darker color palette than we’re used to from Pixar to drive the point home.  However, the most ominous moment in the trailer is the tagline which says “From This Moment, Everything Will Change,” showing us that there will be some changes implemented into the franchise.

I really like the idea of Pixar getting a little grittier.  We know they most certainly have the capacity to do so, seen in their award-winning animated short they released entitled Borrowed Time (image below) that tugs hard on your emotions in its mere six minute run time.  Within a matter of minutes, Pixar artists (which made this short film in their free time) take you on a roller coaster of emotions, making you feel carefree and then absolutely devastated.  Pixar has an amazing capability to tap into your sentiments and it is one of the things that I feel is missing from the Cars movies and that they could expand upon in a third movie.

However, one thing that still has me nervous is the return of Mater to the Cars movies.  He is used as the comic relief to an already child centered movie and really overstayed his welcome, especially in Cars 2.  Although limited plot points are available for the movie so we can only speculate to what Mater’s role will be in the third movie, reservations to him being in the movie (especially since he’s voiced by Larry the Cable Guy) are definitely warranted.  Mater’s kind of comedy catered to the lowest common denominator of fart and poop jokes, humor which Pixar normally strays away from in their movies.  If Cars 3 takes on a darker tone, the same Mater character from the two previous movies would stick out even more.

At this point, however, I trust in Pixar to succeed in whatever project they undertake.  They have proven themselves since Cars 2 with every movie being fresh on Rotten Tomatoes since then while also packing some major heart along the way.  Whatever side you’re on concerning a possible dark tone for Pixar, we’ll have to wait to find out until June 16th, 2017.

What are your thoughts on the Cars 3 teaser trailer?  Do you like the idea of a darker tone from Pixar?  Comment below and let me know!

What should I review next?  Whether it is old or new, the choice is up to you!

Never even seen the first or second but my nephew seem to love these films, I finally caught up on the finding nemo and finding dory films lol