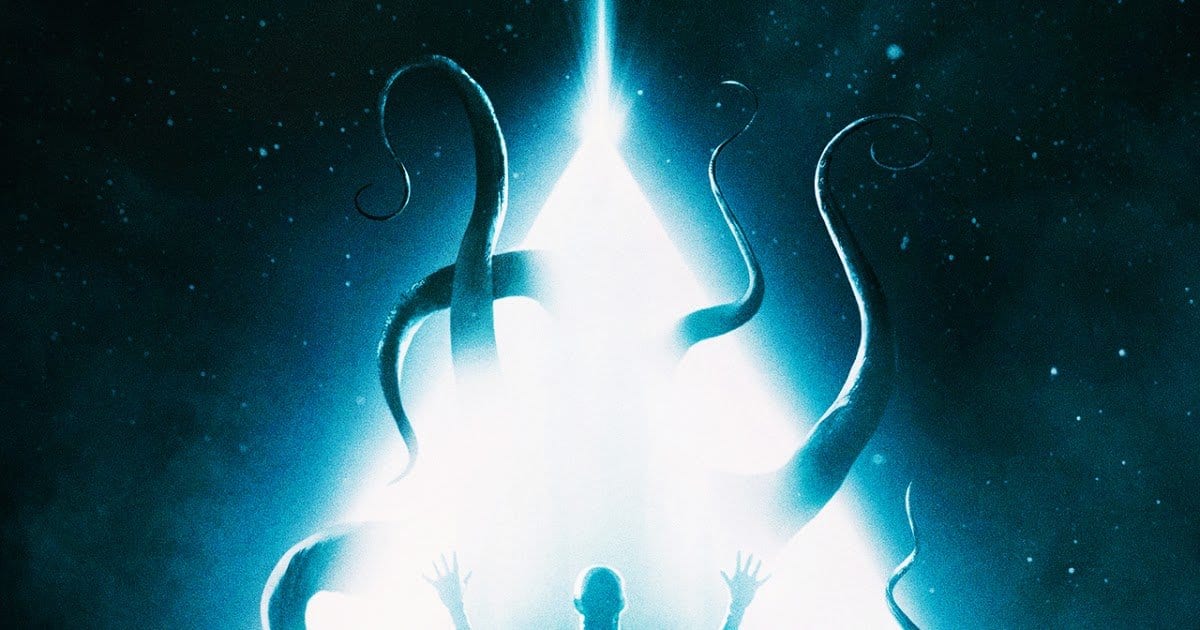 Horror has undergone a serious upswing in quality level in recent years.  Films like Don’t Breath, Get Out, It Comes at Night, and The Witch have opened the door for new, interesting concepts to once again take place within the genre.  A nice result of this horror renaissance has been a resurgence in low-budget horror.  One recent example is The Void, a modern-day creature feature that harkens back to the 80’s.  But is the film worth your time?  The following review will be spoiler free.

The Void is directed by Jeremy Gillespie and Steven Kostanski and stars Aaron Poole, Kathleen Munroe, and Kenneth Welsh.

A policeman (Poole) finds an injured man on the side of the road and takes him to a hospital.  However, once there, the man begins to cause a ruckus, screaming to be let go, warning of certain death by an unknown force.  The policeman then heads outside to his car when all of a sudden a hoard of people dressed in white cloaks with a triangle on them surround the hospital, forbidding anyone from leaving the property.

To make matters worse, deranged, satanic creatures begin to creep out from the shadows, forcing a band of citizens to come together and fight for survival.  All the while, they must uncover what mysteries the cult has in store for them.

It’s always nice to see a group of people be able to carry out their dream.

Initially, The Void used funds that it had received from Indiegogo, a crowdfunding site, to start production.  It received over $80,000 from crowdfunding, allowing production to begin.  Later on, Jonathan Bronfman, executive producer of The Witch, got involved with the project and allowed it to gain momentum.

After completion, The film received a spot at Fantastic Fest, where it was met with generally positive reviews from critics.  The festival prompted a tiny release of the film to a mere 50 theaters before moving to video on demand.  With the film now on Netflix, it appears that directors Jeremy Gillespie and Steven Kostanski have started a nice little career for themselves in terms of directing. Disclaimer (What I Liked)

Like another recent horror film, It Comes at Night, The Void is another one of those films that formulates a ton of ideas without ever really explaining them.  What started this cult?  What do they base their beliefs off of?  We’ll never know.  Instead, we are thrown into a situation with a group of characters where they ultimately learn only bits and pieces of the whole story.  And yet, they must survive as grosteque monsters hunt them down.

There’s so many bizarre elements to The Void that warrant a viewing based purely on fascination.  While there are obvious nods to low-budget horror films like John Carpenter’s The Thing, one can even make comparisons to 2001: A Space Odyssey with its shear imagination and bonkers elements.

And yet, with its ambition come limited answers.  Does that bug you?  If so, you’ll most likely walk away incredibly frustrated.

As for this critic, with each question raised, I became more captivated by what was onscreen.  It may not be satisfying, but it certainly envelops you in a bizarre, horrifying reality.

With this bleak, scary world comes some outstanding creature effects.  As you can imagine, there is not much room in The Void’s budget for CGI effects.  However, the practical creatures depicted in thie film are far more effective.  There are some great designs in some of the creatures that amount to truly upsetting imagery.  The monsters are deformed and slimy.  More squeamish viewers may even have to hold back a gag or two.

The way these creatures take hold of the characters is even more upsetting, entangling them in vine-like apendages that break their bones, eat at their skin, and even plunged down their mouths.  With CGI, these visceral images wouldn’t have the same punch.  There’s a cognitive element to seeing these practical creatures that ramps up the scare factor.  While you may not consciously be thinking it, somewhere in your head your brain is saying, “this looks real.”

Directors Jeremy Gillespie and Steven Kostanski also understand how to utilize these creatures.  Without the proper setting, the creatures could look pretty fake.  But, the directors understand the limitations of their practical effects by using darker rooms with proper uses of lighting, allowing the illusion of these creatures’ reality to remain intact.

However, The Void is largely an effects display, failing to give each actor the proper characterization.  Soon after the movie ends, you’ll have forgotten the names of each of these characters.  Like most other low-budget flicks, there’s some spotty acting to behold.  But, if you can add compelling elements to each character that make them stand out then it can overcome some amateurish acting.  That’s not that case with The Void, however.

Unfortunately, each character is basically a placeholder for a creepy set piece that involves the previously described creatures.  There are attempts at humanization between the main characters, but it just never approaches a satisfying level.  It’s truly a shame because once the film becomes incredibly surreal and borderline insane, the main relationship is what is suppose to power The Void.  Instead, it falls fairly flat.

Without characters to latch onto, you are left to study and analyze the bizarre layers of the film and ask yourself what they may mean.  With better characters, The Void could have ascended to serious cult status among horror fans.

But hey, at least those creatures are absolutely horrifying.

The Void is a fascinating, fascinating film.  It never shys away from incredibly bonkers elements that will most definitely keep you intrigued until the film comes to an end.  Not all of these elements work, but there’s something to be said about a film that consistently drives you to ask more and more questions.  It gets a B-.

The film is currently on Netflix so check it out!  If you’re a genre enthusiast, you may just get a lot of enjoyment out of this film.

Thanks for reading!  What are your thoughts on The Void?  Comment down below!

If you enjoyed this article, subscribe to MovieBabble to stay up to date on the latest content.