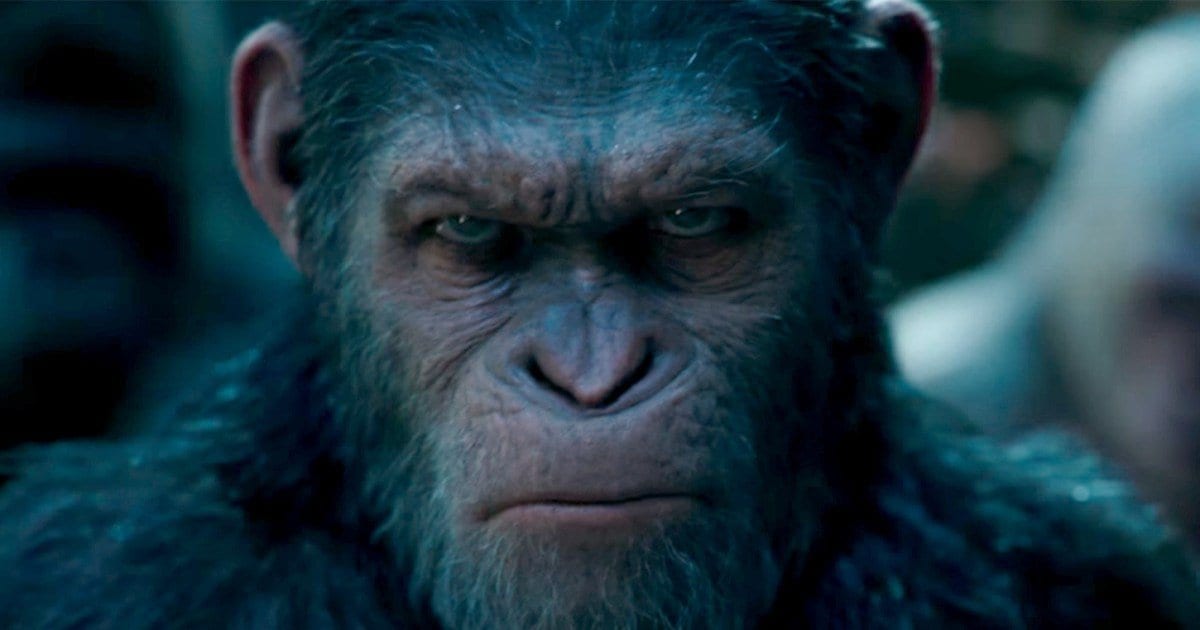 This weekend’s main release is a film that many have been anticipating for a very long time, War for the Planet of the Apes!  The first two films in this prequel trilogy have become beloved by fans everywhere.  Many have gone as far as saying that a solid third film would make this trilogy stand among the best of all-time.  But does War rise up to the high bar set for it?  The following review will be spoiler free.

War for the Planet of the Apes is directed by Matt Reeves and stars Andy Serkis, Woody Harrelson, and Steve Zahn.

After the events of Dawn, Caesar (Serkis) continues to have a somewhat strained relationship with humans, finding the good in them even when that may seem difficult.  However, a new army led by a ruthless Colonel (Harrelson) has risen to power to looks to wipe our the apes, citing them as mankind’s biggest threat.  As the film progresses, Caesar must eventually face off against the Colonel, all the while facing new foes and alliances.  What occurs next then puts the fate of the planet in the balance.

In 2011, many were blown away with just how good Rise of the Planet of the Apes was.  Many questioned why a prequel series for the Apes was even necessary.  Luckily, Andy Serkis and company quickly quelled any reservations that people had.  Then, Dawn of the Planet of the Apes was released in 2014 which had many people head over heels singing the film’s praises.  Now, we have the third leg of a trilogy about to be released which has many wondering, could this Apes franchise end up ranking among the best trilogies of all-time?

Every time a franchise has the chance to join the likes of The Lord of the Rings or Star Wars trilogies, the third film always seems to be a let down (cough Spider-Man 3 cough).  But lets face it, telling three great stories within the same world is an incredibly tough job.  The balancing act between telling a complete story while also leaving elements open-ending for future films is something that few creative minds can accomplish.

However, War for the Planet of the Apes a great team coming back to complete the product.  When you have Matt Reeves and Andy Serkis involved in a film, odds are it’s going to turn out okay.

The real life apes that the creative team trained for this movie did a fantastic job emoting and…wait.  They aren’t real?  Could’ve fooled me.

In all seriousness, technology in film has gotten absurdly good.  War for the Planet of the Apes relies on apes to emote and express the main heart of this story.  Luckily, the technology used for these movies has gotten so great that these apes have every capability of expressing the deepest emotions with limited dialogue.  There are looks that apes give to each other in this film that will floor you.  It might even bring a tear to your eye. With this ability to show apes in all their glory allows director Matt Reeves to focus completely on the apes, especially Andy Serkis‘ Caesar.

Serkis is absolutely breathtaking as Caesar.  Underneath that CGI makeup, he is putting on an absolute acting clinic.  You can see the pain and suffering on his face.  As he struggles between the lighter and darker sides of his mind, you can see his frustration.  In this instance, Caesar becomes more relatable than 99% of human characters.

Get this man his Oscar already!

As a whole, War for the Planet of the Apes is a very bleak film.  It’s stark landscape is matched by allusions to Nazi deathcamps.  However, at its core there is a beautiful, mesmerizing score that takes hold of you in unthinkable ways.  Michael Giacchino‘s composing work in this film ranks among the best in his career.  Considering he’s done work for both the Star Wars and Star Trek franchises, that’s some pretty serious praise.

The best scores express exactly what you should be feeling.  There are glimmers of hope in this film that were necessary to highlight, or else the film as a whole would just be a downer.  Luckily, Giacchino knows exactly how to capture these moments.  Because of this, there’s a certain cathartic feel that the movie has throughout its run time. It’s also not a very standard score.  In fact, it relies heavily on sounding very, very different without becoming overbearing.  It perfectly balances the feeling of catching your attention while not taking your eye off of the main conflict.

I’ll be honest here, my original intent was to have a section in this review regarding “what I didn’t like.”  Upon initially seeing the film, I found some moments a little plodding, even making the film as a whole fall pretty flat.  As I left the theater, I had my mind set on an “A-” grade for War for the Planet of the Apes.

However, these issues are largely brought on by the idea of the movie I pictured in my head.  A film with the title “War for the Planet of the Apes” has certain connotations that come with it.  You expect the film to end in an effects-driven bonanza.  So when the film doesn’t exactly do that, it appears upon intial viewing that it wasn’t very satisfying.

I encourage everyone that watches this film to take a step back and reflect on it.  This is a character study of Caesar and all the calamity and death he’s endured.  It’s a discussion of humanity and purpose.  When it appears that the film takes a dip in momentum, there’s much more going on underneath the surface.

War for the Planet of the Apes is a very, very satisfying ending to a trilogy that now stands among the best to ever hit the big screen.  It’s deep, thought-provoking, and incredibly emotional.  It gets an A+.  For those looking for an all-out war between apes and humans, this movie is not that.  Rather, it is a deep contemplation of humanity and the journey of our beloved Caesar.  There’s some action here, but the film mostly acts as a meditation.  It’s truly, truly satisfying.

If anything else, War for the Planet of the Apes has taught me to reflect on a film more before cranking out a review.  As I continue to grow MovieBabble and expand my expertise, this trait will become more and more important.

Thanks for reading!  What are your thoughts on War for the Planet of the Apes?  Comment down below!

It’s a truly harrowing movie. It’s amazing how much emotion can come from CGI apes!

Great review. The score was amazing. When I was leaving the theater, me and the rest of the crowd were just kind of looking at each other, having just been on this very emotional experience. No one was in a rush to leave. Beautiful film.

I had the same experience. Everyone was sort of apprehensive to start clapping once the movie finished since it was so heavy. Luckily, someone started it which then allowed everyone to get involved. By the end of the credits, everyone in the theater was clapping.

Great review – pretty much sums up the movie for me. I agree that there were a few *slower periods in the movie, not as much action as the previous instalment but I felt this was important to give the emotional part of the story a lot more emphasis (which was achieved successfully). Andy Serkis is just wow! He really lifted the bar this time as Caesar – I felt so much closer to Caesar this time around and that really impacted my overall thoughts of the movie. By far my favourite of the trilogy thus far.

There’s something about this movie that just hits you like a ton of bricks. Maybe the most emotional movie of the year so far!

I’m excited to see this film tomorrow. I loved the original movies, but this new trilogy is better than the original. Both this and the Chris Pine and Zachary Quinto Star Treks actually managed to improve on an already great idea. Not something that happens often.

Totally agree with you there. When you watch the original Planet of the Apes, you know it’s a good movie but it can’t help but feel pretty dated.

We’re in total agreement on this one! A remarkable film and a triumphant conclusion if this is the end…

I kinda hope they make this one the last one. Of course they might continue if the film breaks the bank at the box office, but I feel like the story is perfectly complete as is.

Reeves has already said he would love to return to the franchise and has strong ideas about where to take the story. If we’re lucky Fox will allow him space to go off and do The Batman (or whatever it ends up being called) and maybe come back in a few years reinvigorated to continue.
If not, as you say, this trilogy works beautifully as it is!

I saw that as well. If they brought him and the rest of the team back and then I’d probably get on board!