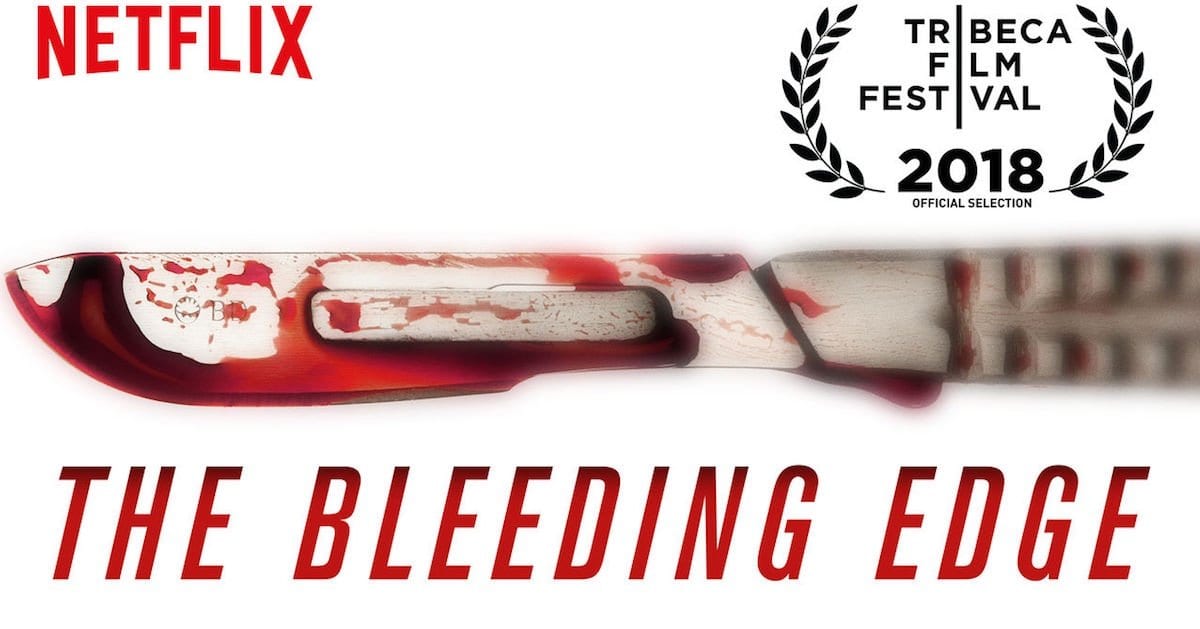 Netflix is definitely a top contender in the film industry today. They are widely becoming known for churning out quality programing. Indeed, this quality extends past their show and movie platform and feeds into the documentary scene. I was expecting something great when I saw The Bleeding Edge pop up in my feed, and I was not disappointed.

A Film By: Kirby Dick and Amy Ziering

The logline for this film could not be more straight forward: “The eye-opening look at the fast-growing medical device industry reveals how the rush to innovate can lead to devastating consequences for patients.” At just over an hour and a half, this film does not lose sight of it’s main purpose.

Throughout the film we are painted a portrait of just how pervasive medical technology has become in our lives. We are shown that from before we are even born and until the day we die, we are surrounded by medical devices and technology. And the film asks the crucial question, are these devices safe?

A Brief History of Medical Devices

During the 1920’s up to the 1940’s there was an explosion in fraudulent devices. Some of these products would make outrageous claims like using sound waves to cure cancer, or one that claimed to cure arthritis with ‘Z-Rays’. This led to the FDA putting out a public service announcement that asked citizens to, “Help stamp out quackery.” What is remarkable about this PSA from the 1940’s is the FDA could put out a similar one today and it would be just as valid.

During this era, many medical devices would arrive on the market with only doctors verifying their safety. Then in 1976, the Medical Device Regulation Act came under the control of FDA. This led to many doctors and companies claiming they should have to go through testing of devices they were already using. The FDA allowed them to grandfather in many devices that had never undergone any test whatsoever.

The Food and Drug Administration: How an Exception Becomes a Rule

The FDA is the most important consumer protection group we have in the United States. They regulate every single thing that comes in contact with the body — from medication, shampoo, to medical devices. And while there are stringent testing that must happen to medication, and even makeup, that is not the case with medical devices. There are devices we are so accustomed to seeing at each doctor’s visit, that we don’t question them. From tongue depressors to nebulizers, pacemakers to stints, each and every one is a medical device.

These devices are so prevalent in our lives that I doubt any of us stop to consider their safety. What process do these devices have to go through in order to become available to the market? Currently, there are over 70 million Americans implanted with some type of medical device. Most people believe these devices are rigorously tested but that is not the case in many instances!

The FDA built a loophole for new medical devices to bypass the Pre-Market Approval (PMA) process. The PMA is what we think about when we hear about testing: the manufacturer must test in humans, compile data, then present the data to FDA scientists. However, medical device companies claimed it would take too long to test every little update. This led to the development of the 510(k) Equivalence — if the company could show that the new device was substantially equivalent to the old device, they did not have to test.

This exception has now become the rule, and most devices never see human trials. This is remarkable, because even if a device is shown to be a failure and is recalled, a new device can be approved because of the 510(k) Equivalence. 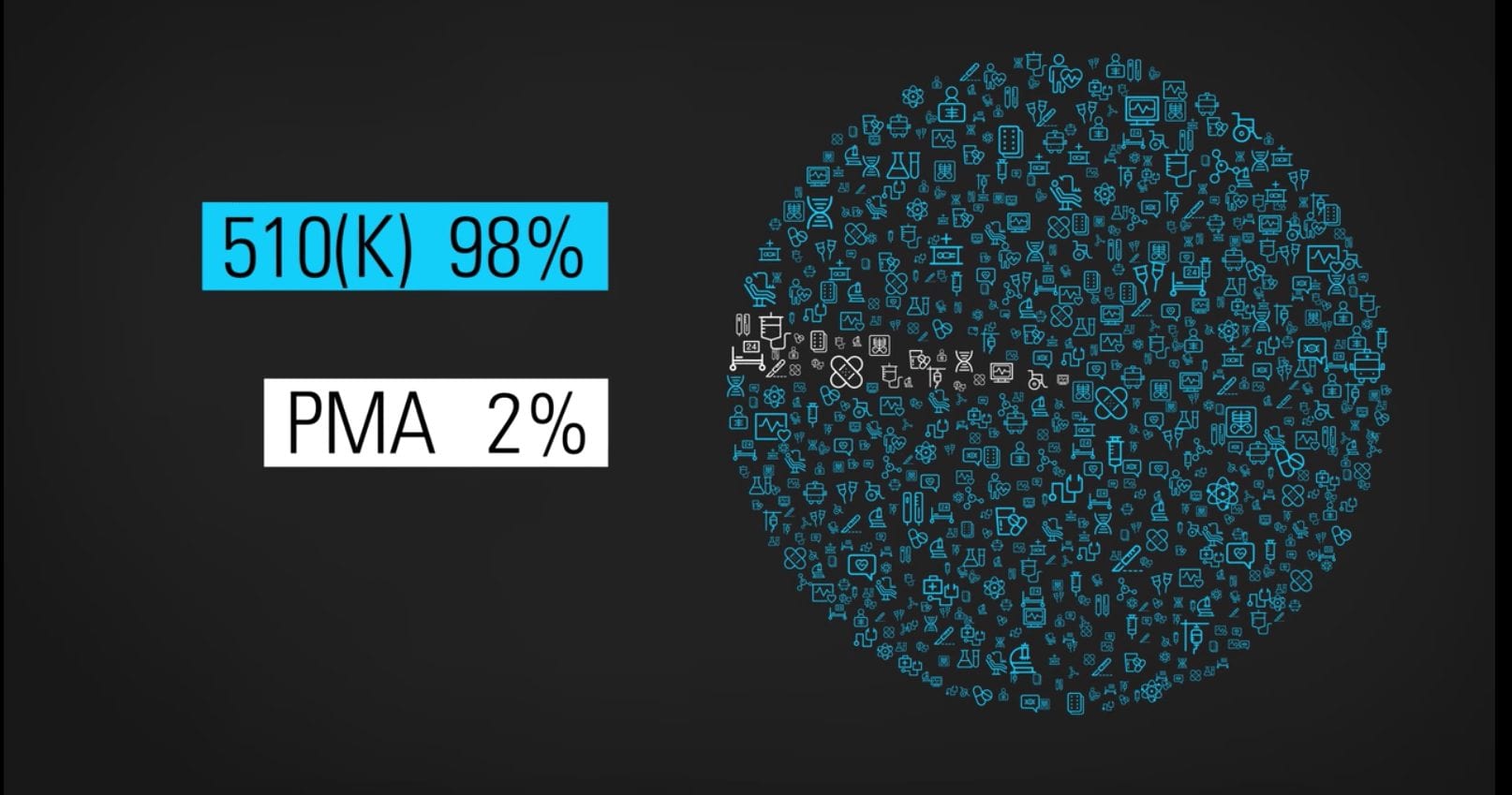 A Bayer of a Problem

A large portion of this documentary is dedicated to a birth control product called Essure — and it’s no wonder! As a woman of reproductive age, this was something offered to me as a form of permanent birth control. In 2015, I was told about this tiny medical device made from a metal coil that would fit neatly into my fallopian tubes. The doctor explained the coil would cause scar tissue to grow around it, thus making it impossible for me to become pregnant again. And I am not sure what it was about this sales pitch — because that’s exactly what it was — but I was not comfortable with anything I was told.

Angie Firmalino, who appears throughout the film, was implanted with Essure in 2009. From the get go, she had a myriad of issues from fevers, constant bleeding, to sharp stabbing pain in her sides. When it became unbearable, she went into the doctor for an ultrasound and they discovered that one of the Essure coils had gone into her uterus! After they took the coil out of her uterus, the doctors told her she would be just fine. This was far from true, as she ended up hemorrhaging in the emergency room before being whisked off to surgery.

Essure did go through the PMA process, but the process for medical devices is much less stringent than drug trials. Drugs trials require two studies, with very large pool of patients before documentation can be submitted to the FDA. Medical devices require one study, and a small pool of patients — Essure was approved on a very small number of women, and they were only followed for a short amount of time. Indeed, the main thing the follow-ups wanted to know is if the women had become pregnant. No questions were asked about pain levels! 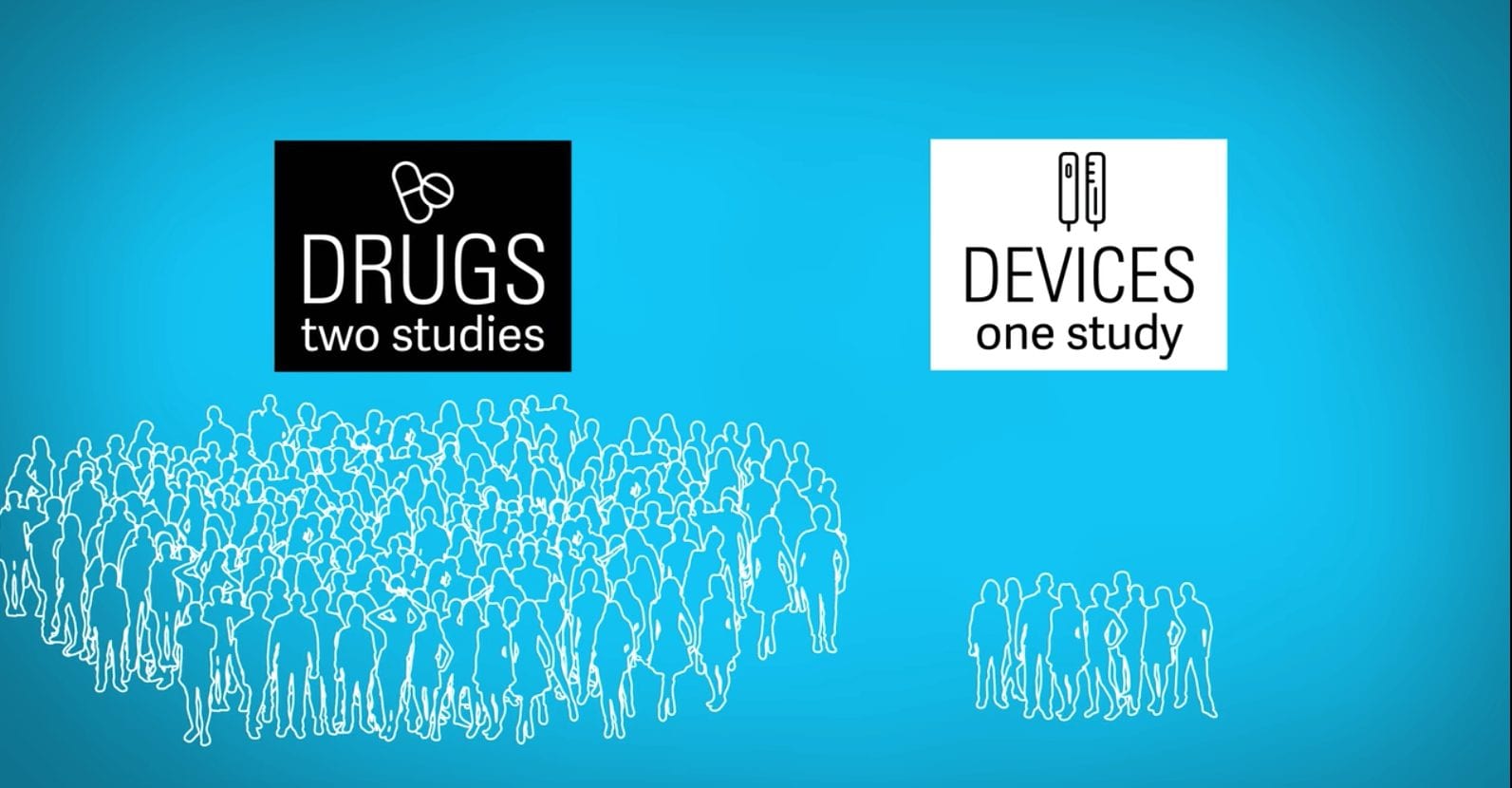 The relentless “improvements” companies like Bayer tout are putting everyone in danger; not all doctors even understand the approval process for medical devices, they just trust that they have been tested rigorously. Firmalino runs an Essure Problems FB Page and many sister pages have popped up around the world. Her hope was to find others that may have been suffering like she had, and she was overwhelmed by the sheer number of women affected by this device. The kicker is Bayer knew these women were suffering from these issues, and had already pulled the product from oversea markets in 2017! It wasn’t until two weeks before this documentary came out that Bayer decided to stop selling Essure in the United States.

Essure is not the only device focused on within this film — the discussion ranges from hip replacements, pelvic mesh implants, and robotic surgical machines (namely the da Vinci Surgery machine). But the underlying thought from each expert in the film is that need to innovate is outweighing the need to do it safely. The massive adoption of all the latest medical devices and technology comes with little focus on the outcomes. There are products being put out that companies know are dangerous to human health. Devices are churned out because it is a money making gold mine.

The Bleeding Edge shines a light on an industry everyone assumes is being highly regulated. While a cursory glance shows medical devices are highly regulated, the 510(k) Equivalence leaves too much to chance. Not to mention all the kickbacks doctors get for using a company’s specific medical device! Patients shouldn’t have to be worrying if their new implant is going to end up making them sicker. The need to innovative is likely killing people. 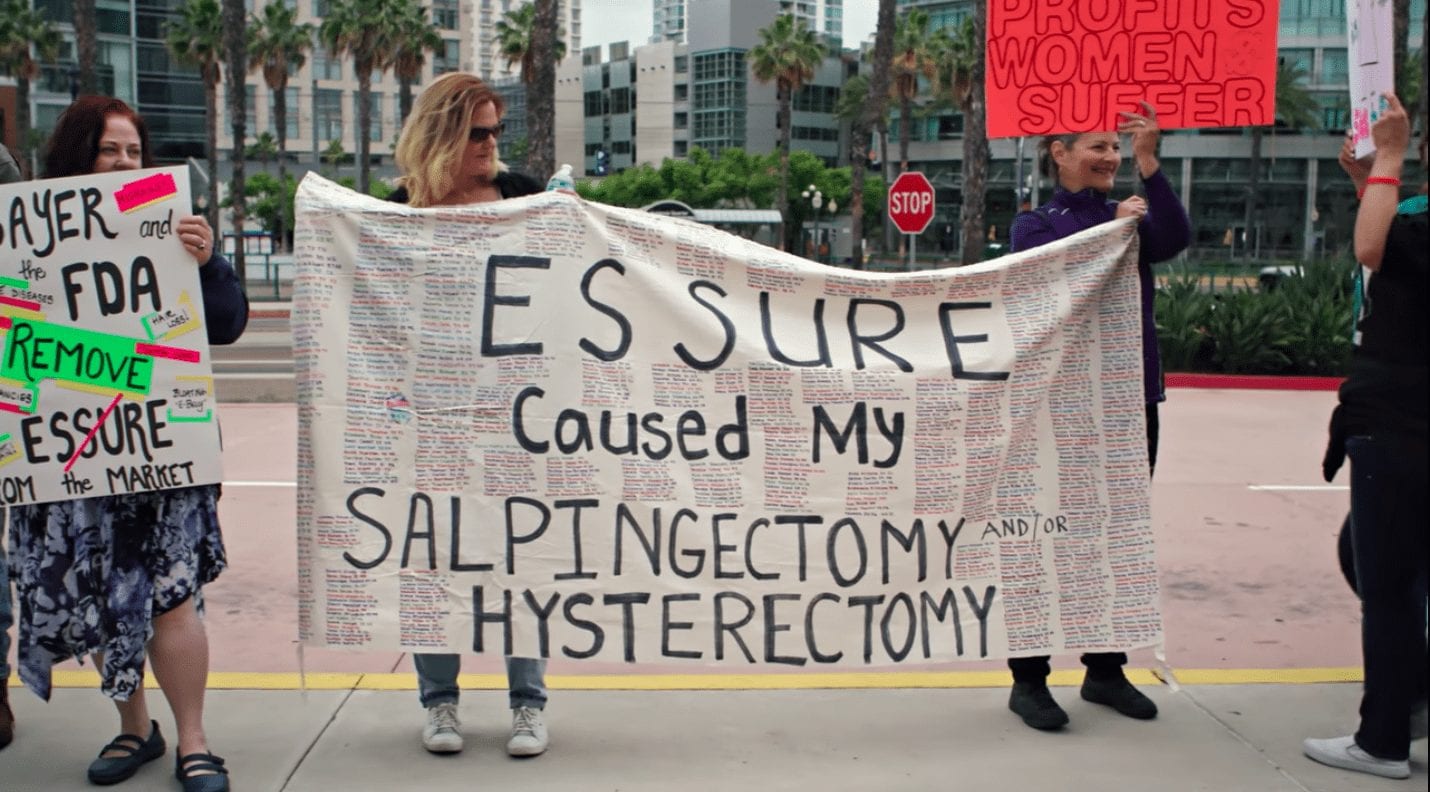 The purpose of this film is not to scare people unnecessarily. Rather, I believe the filmmakers genuinely want people to regain control over their care. And while it is true we are not doctors, that does not mean we don’t deserve to have our questions answered! Being a well informed consumer should not stop just because we are in the presence of a medical degree. At the end of the day, we are buying what they are selling — you would never walk into a car dealership and just buy the first thing you see. You would ask many questions, get a second opinion from someone you trust, and discuss the safety ratings. 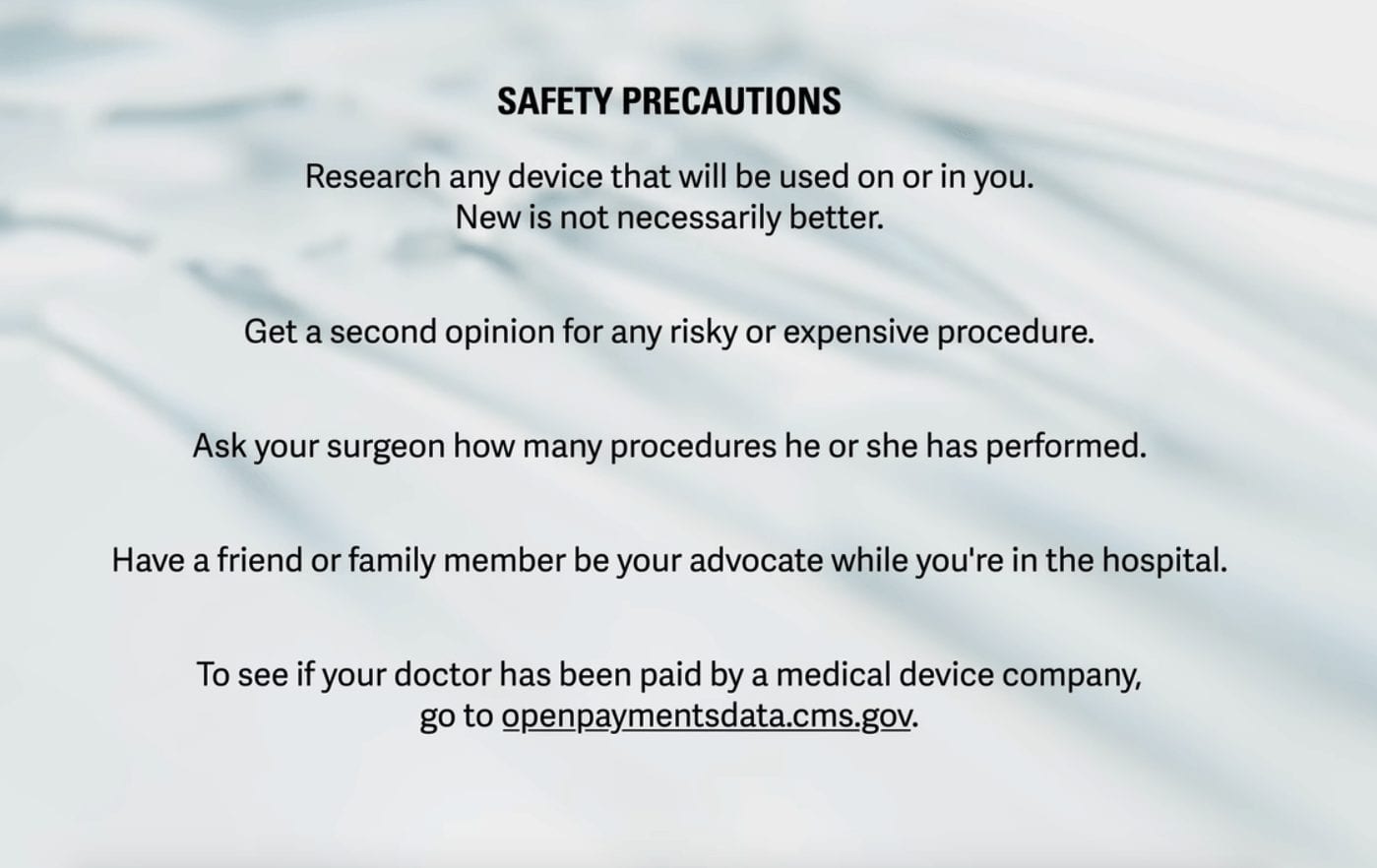 Thank you for reading! What are you thoughts on the Netflix Original Documentary The Bleeding Edge? Comment down below!

[…] is achieved by teaching kids how legislation is formed, how information can be promulgated in a helpful, unbiased way and how…I’m […]