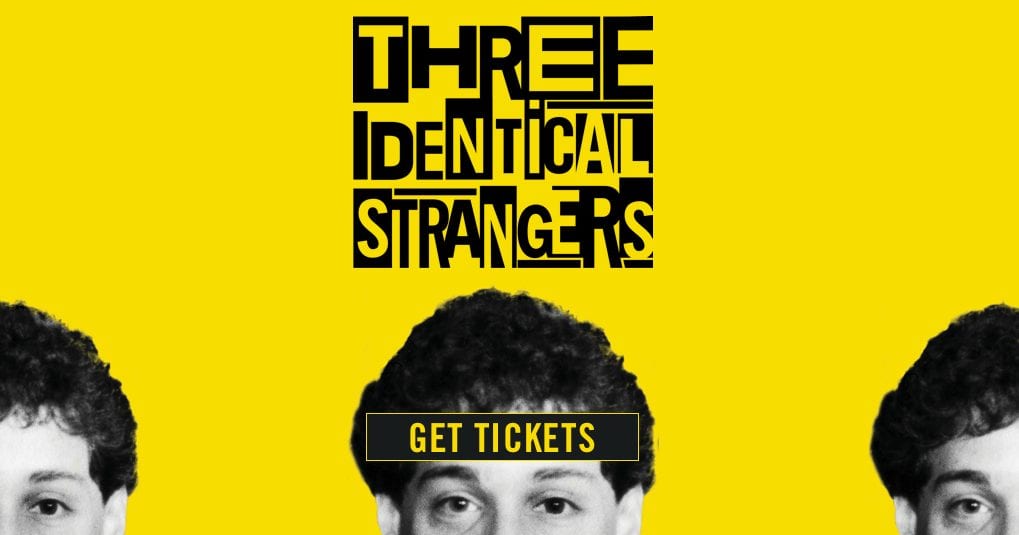 Every so often, you come across a movie that is so unbelievable and has so many layers that it can’t possibly be true. Three Identical Strangers is that kind of movie, except with one, painfully obvious difference: the entire story is completely, utterly, and amazingly true, so much so that it is one of the most riveting movies you’ll see all year — and it’s one of my personal favorites.

Upon arriving for his first semester at another college decades ago, Robert Shafran begins to get misidentified as another person named Eddie. He’s very taken aback about it, unsure what to think, until Eddie’s old roommate sees Robert. The roommate immediately believes that he’s seeing double, and after a few logical deductions, Robert realizes that he has a long-lost twin brother.

A newspaper story quickly prints and spreads like wildfire as Robert and Eddie meet up, but the story isn’t finished yet. A local kid named David Kellman sees the story and thinks he’s seeing two of himself — these three are triplets!

The triplets parade around New York, hitting all the major media outlets for their tour of broadcast television. All is right in the world. Inevitably, the three triplets start asking questions. Why were they split up at birth? What was the purpose?

As they and the viewer come to realize, these questions are not met with happy answers.

2018 is rapidly shaping up as the year of the documentary. Many films have broken out to achieve serious critical success — as well as incredible box office success by documentary standards. The clear fan-favorite of the year thus far is unquestionably Won’t You Be My Neighbor?, the story of Fred Rogers and the birth and rise of his hit children show. The Focus Features distribution has earned nearly $20 million, the best amount since 2013 by a documentary.

But, as with any trend, it does not stop there. Whitney, Pope Francis: A Man of His Word, and even Three Identical Strangers — as well as the standard nature docs that arrive in theaters every year — are melding serious critic success with strong box office receipts.

What exactly is the cause of this boom? It’s hard to say — as with most things, it’s a confluence of events. However, one thing is becoming clear: the Oscar for Best Documentary will be a very difficult award to hand out this coming year. Every Single Person Involved is an Amazing Storyteller

From the second the camera says “GO” — i.e. the camera starts rolling — these infectious personalities take hold of you and never let go. When you create a documentary and you have talking heads that string the narrative together, you’re sort of at the mercy of their personalities. Obviously you can essentially get where you want to go with great editing, but there’s an extra bit that is totally reliant on the people involved in the story. Luckily for Three Identical Strangers, these brothers have so much flair and fun as they recount what essentially are the defining moments in their lives. These New Yorkers have so much fun — well, for the most part — describing what they went through in their early adult lives.

As one of the brother’s explains, after they all met, sex, drugs, and rock n’ roll was their lives together. All of the exploits are so entertaining, and they knock you off your bases for when the avalanche of ‘holy shit’ happens later on.

Go Into Three Identical Strangers Knowing as Little as Possible

If you’ve been reading MovieBabble for any period of time, you sort of know the format that goes into every review. Typically, it’s three or more sections where aspects of the film are discussed, in combination with the other, more informational sections. However, for Three Identical Strangers, I’m going to deviate from that structure. I simply don’t know how to discuss this film without going into its twists and turns. For your viewing pleasure, I also think it’s extremely important that these secrets be kept as, well, secrets.

If you really wanted to find out more about the plight of these brothers, you easily could — it is a true event that has been documented many times before, after all. But if you don’t know anything about this story, I strongly urge you to not seek out any information about it. if you go into this film truly blind, it creates an amazing, surreal experience that you know is true, but you just can’t accept it as such. It goes as far as questioning some of our most basic traits as humans. Seriously.

So stop what you’re doing and go to the nearest theater playing Three Identical Strangers. You won’t regret it. Trust me. Amazingly true and incredibly astonishing, Three Identical Strangers is an incredibly entertaining and shocking story that gets more bizarre by the second. The documentary has such fascinating way of revealing itself, ways that are similar to something you’d see out of The Usual Suspects.

Whatever you do, see this movie knowing as little as possible — you’ll be so much happier that you did! Don’t read anything else about it, just go see it!

Thank you for reading! What are you thoughts on Three Identical Strangers? Comment down below!

[…] At times in Twisted Pair, I feel like Neil Breen made the film because he learned how to use a green screen and wanted to show that skill off. It wouldn’t surprise me if that was the only reason he made the main character have an identical twin. […]

Definitely do so! It’s wild!

Excellent movie. Mind blowing is the best way to describe it.

Absolutely! My mouth almost dropped to the floor many, many times! lol

I MUST SEE THIS MOVIE!

Lol yes you did my good man! You sure did!

Yeah! jumping up and down