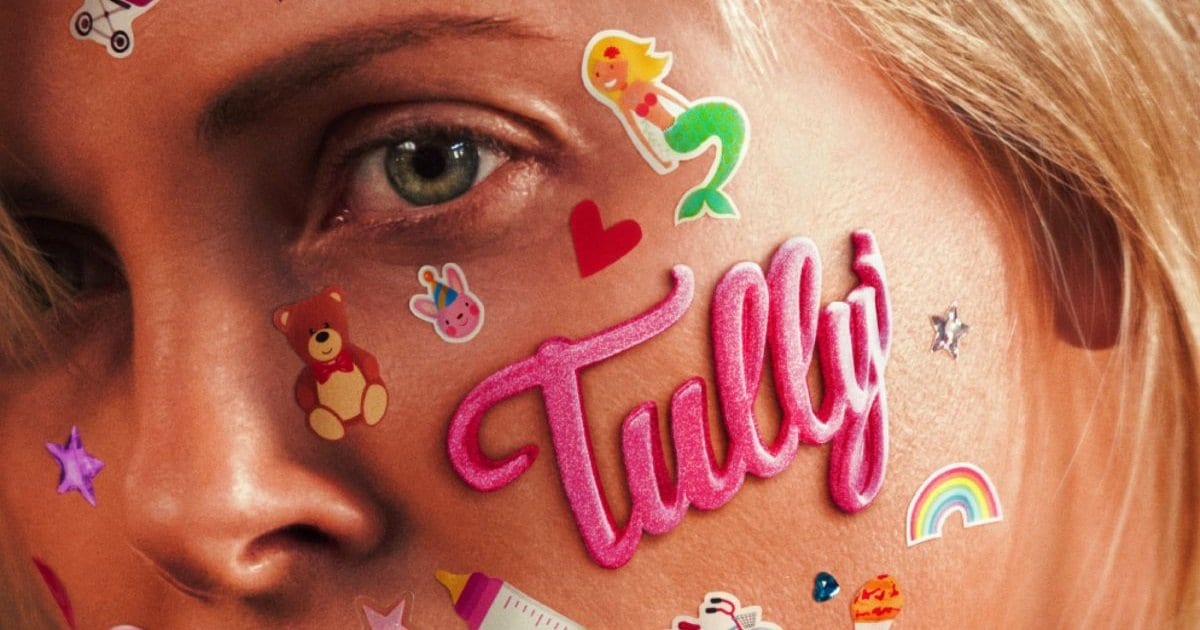 Over the last few years, Charlize Theron has ascended in the ranks to become one of the best actresses working in the industry, moving from genre to genre while still managing to entertain.  She’s never afraid to challenge herself with performances that directly contrast other recent performances, and Tully is the next example of her continuing to subvert expectations.

With a third child on the way, Marlo (Theron) isn’t exactly excited.  She loves her children more than anything, but she knows from experience how difficult it can be to raise a newborn, and she doesn’t know if she can handle it again.

Marlo’s brother Craig (Duplass) senses that Marlo is struggling and goes ahead and arranges a night nanny to allow Marlo to get some sleep while the baby is getting care.  Initially apprehensive to the idea, Marlo reluctantly agrees.   Although she remains uneasy even as her night nanny Tully (Davis) enters her home, the two women eventually develop a special relationship together.

Some actors go all-out for their roles, and Charlize Theron certainly fits into that category.  She’s become a kick-ass action star in films like Mad Max: Fury Road and Atomic Blonde, but she’s also taken on very different body transformations as well.

In the role of a nursing mother for Tully, Theron gained nearly 50 pounds in a three and a half month period to appear believable in the film.  She ate around the clock to keep weight on, and it took her almost a year and half to take all the weight off after filming wrapped.  Now that’s serious commitment.

It also shows the faith that Theron had in both Jason Reitman and Diablo Cody to bring this particular story to life.  Teaming up once again after films like Juno and Young Adult, it appeared that Tully had the makings of a great film based purely on the work that was done before the camera ever started rolling. 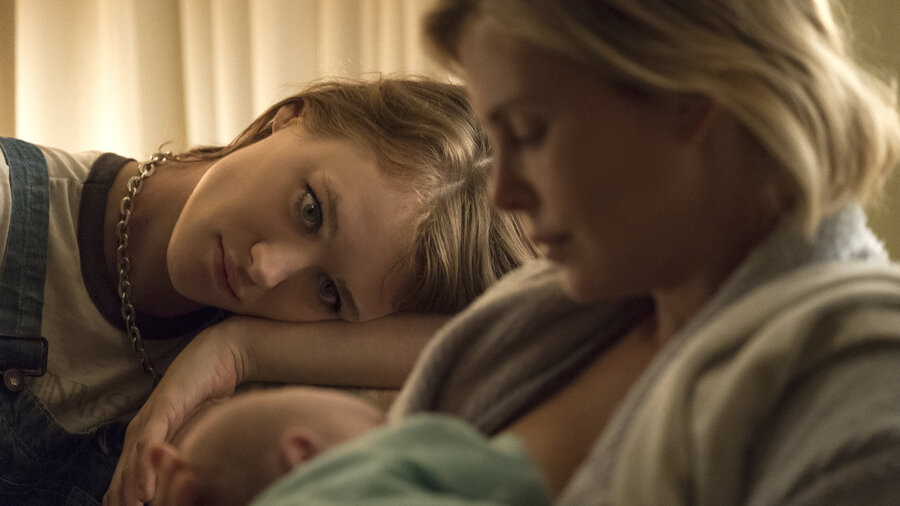 Charlize Theron is already one of the best actresses working today, but her performance in Tully may have elevated her to another level.

Theron’s character Marlo clearly loves her children, and a lesser a movie probably would have painted her as a person that can’t stand her kids and wishes they would disappear.  However, the anxiety of balancing the life of her kids with her internal happiness clearly gets to her, and that’s where her character routinely operates.  Theron is perpetually wrecked throughout Tully.  Most actors can pull off the tired, damaged look with ease, but Theron gets into this character with a serious amount of depth that is missing from most movies of similar ilk.  The pain of believing that she is ultimately a failure bleeds into her every move, and watching her smile through the pain is tremendous — and even haunting at times.

And then there’s MacKenzie Davis, who contrasts Charlize Theron with a wonderful outlook to just about everything in life.  She’s young, energetic, and morally free, and it’s pretty great to see these two play off each other.  Davis is bright-eyed and bushy-tailed, taking everything that comes at her with an overabundance of hope and optimism in all things.  Thankfully, her somewhat eccentric, hippy-dippy attitude never becomes cartoonish, allowing both her and Theron’s character to remain quite relatable. But where Tully truly succeeds is in its writing and direction that brings two collaborators back together once again.

Tully is filled with smart dialogue that is always engaging, but it never becomes overtly clever or in-your-face.  It feels like regular humans are speaking with subtle bits of wit, and characters that try to go beyond the status quo are teased for attempting to sound too intelligent.  It’s all in service to characters that remain relatable at every turn.  Rather than turn to the stereotypical depiction of the struggle mother that Hollywood consistently puts in all its films, the script of Tully takes a deep dive into what these characters hope, fear, and regret.

Jason Reitman accents these ideas perfectly, filming with a constant desire to ratchet up the anxiety and concern, specifically in Marlo.  For a movie that is seemingly just about a struggling mother, Reitman makes Tully strikingly vivid.  Sometimes, it’s surprisingly hard to watch.  The filming style is similar to watching a downward spiral that gradually speeds up over time — both literally and figuratively. 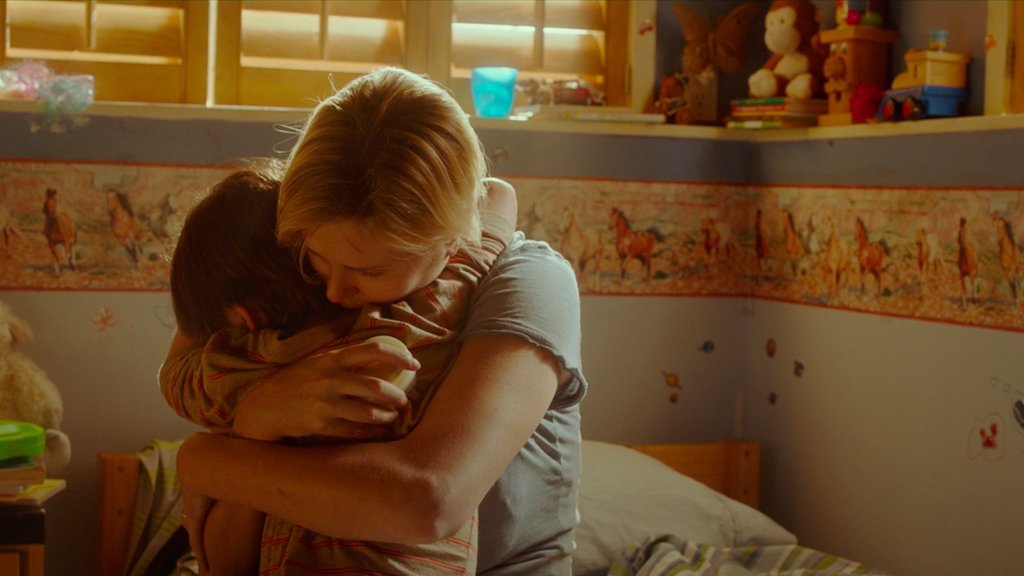 Tully is Much More than What You Think it is

Tully takes a couple weird turns throughout its narrative that might lead to an audible “what?” from the viewer —  it certainly happened to me.  In the moment, these decisions are odd — they might even derail the narrative.  However, I urge everyone to have faith in the filmmakers with this one, because everything comes back around in a fascinating choice of structure.

At first glance, Tully is another run-of-the-mill story about a troubled mom looking for some sort of purpose as she turns over into the next chapter in life.  While that version of this story is admittedly sweet, it’s never going to earn the term “original.”  But in the case of Tully, this familiar setup is in service to a more tragic story of postpartum depression, an issue that doesn’t get enough screen time in today’s Hollywood.  This character study discusses the less appealing sides of childbirth while retaining a sense of whimsy, and yet neither element is ever at odds with the other.  It all comes back to Diablo Cody’s writing, and she’s probably the true star of the film. With standout performances both behind and in front of the camera, Tully is a resounding success of a film, and it goes far deeper than one would expect from the promotional material.

Charlize Theron and MacKenzie Davis are fantastic as the two main characters in this story, and they play extremely well off each other with some amazing lines of dialogue that are equal parts mundane and clever.

If nothing else, Tully is a masterclass in screenwriting, taking what are generally clichés in the genre and flipping them into something much, much more.

Thanks for reading!  What are your thoughts on Tully?  Comment down below!

I enjoyed it. Pleased neither Mother or son labelled as a person is more than their condition.

Your comment “masterclass in screenwriting ” is a bulls-eye Nick. I gave this one 9 out of 10 and no-one calls me a generous reviewer.

I think this’ll end up as one of my favorites of the year when it’s all said and done!

I’m pretty sure I am the only critic who didn’t like this movie. Enjoyed reading your review as always!

All I’ve seen is praise being heaped on this one, especially with its pedigree. I did find a few other negative reviews, whew! 😊

Thanks for the review. CT is such a versatile and interesting actress. I’m intrigued by the couple of weird turns in the narrative you mentioned.

Definitely seek it out!! I’m glad I could help somehow 😁

Nice review – in regards to the weird turns you mentioned, I loved them. They added some great symbolism and ambiguity to the narrative to give you something to chew on. Amazing performance from Theron, would love to see her get some attention at the next Oscars.

I loved them too! Especially with how the film recontextualizes it in the end. I really hope Theron gets awards consideration as well!