‘Boys State’ is a Fascinating Look at a Very American Event 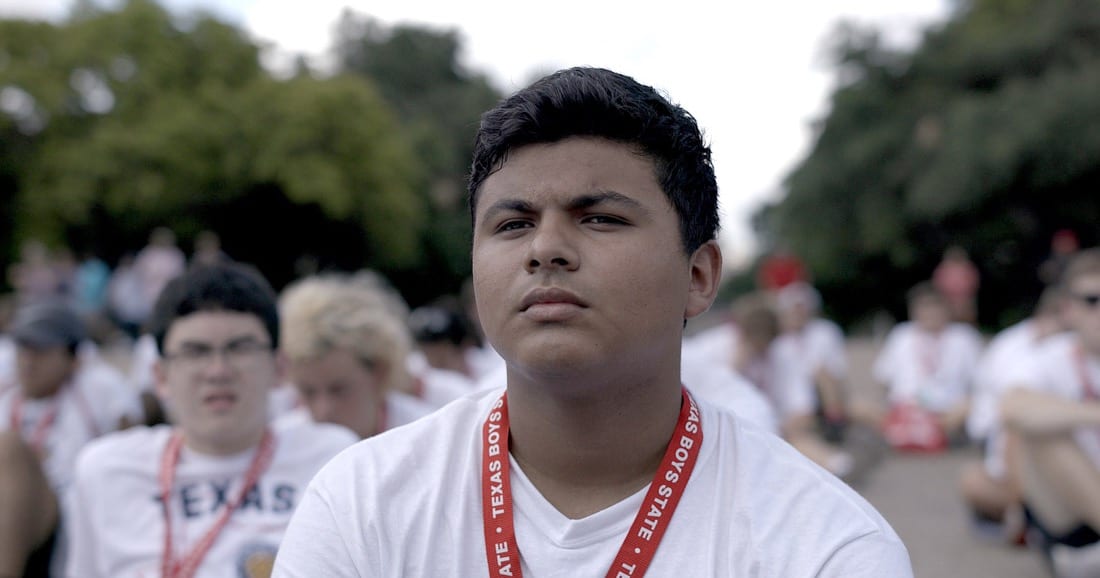 “The desire to be a politician should bar you for life from ever being one.” – Billy Connolly

Since 1935, The American Legion has sponsored Boys State (and Girls State, which is somehow a separated event, even in the 21st Century, but we’ll get back to that), a national civics program designed to immerse seventeen-year-olds into the nuts and bolts of public governance.

This is achieved by teaching kids how legislation is formed, how information can be promulgated in a helpful, unbiased way and how…I’m just kidding. They do it by making it a competition. This is America! More pertinently, in Boys State, it’s Texas. So, what’s notable to a non-American is that although there’s ostensibly an election between two fictional parties (The Nationalists and Federalists) who are framed as being conservative and progressive, there are “progressive” kids whose political hero is Napoleon. This is not Republican versus Democrat, it’s Tea Party Republican versus Reagan-era Republican. So, with that in mind, let’s meet the main kids.

Those To The Right Of Genghis Khan

The Federalists are the more frightening side on display. I don’t like to attack a teenager but these kids…my god. Young Ben is a seventeen-year-old owner of a Ronald Reagan doll. Who says, and I quote, “I don’t think of myself as white, I think of myself as American.” Who refuses to countenance abortion even in cases of rape. However, he’s a self-proclaimed “politics junkie” and he does seem to know how to play the game. Certainly as it’s played to this crowd.

And then there’s Robert, who looks like if Jeff Spicoli from Fast Times At Ridgemont High joined the Republican party at college. Robert has an easy-going charm and confidence that is an obvious choice to sway a bunch of young guys. He doesn’t immediately come across as possessing a laser intellect but it’s not like the U.S. hasn’t got form in electing people because they look successful. It’s also revealed in the course of filming that he’s prepared to hide his own more progressive leanings necessary to hold onto votes. Which is a nicer way of saying he’ll throw the reproductive rights of women under the bus because it’s not a vote winner. With a thousand teenage boys. Who, if you’ll allow me to editorialize a little, shouldn’t even have the tiniest right to weigh in on that subject.

Those (Slightly) To The Left Of Genghis Khan

The Nationalist candidate most focused on by the filmmakers is Steven Garza. The son of Mexican immigrants, he’s a calmer, more reasoned presence than many of the boys shown. There’s a telling moment early on when Robert makes a loud, energetic, ‘hoorah’ speech intended to get the crowd roaring his name and it just fizzles out. Steven then steps up and makes an impassioned, intelligently worded speech and the crowd goes wild. The look of stunned disbelief on Robert’s face is much how I imagine a shark would look if, just as it was about to eat up a seal, saw the seal whip out a flamethrower. “This isn’t how life has worked up to now, what the hell?”

René Otero is the campaign manager put against Ben and he’s very much an outlier among the gathering. Firstly, he’s African American in a convention where, as he puts it, “I’ve never seen so many white people ever” and also, he’s a recent arrival from Chicago so he doesn’t have the automatic Texas Pride™ factor to sway the crowd. What he does have is the focus (and glasses) of a man 40 years his senior.

What I can’t stress enough though is that as much as Steven and René are relatively progressive, that is a HUGE qualifier. They’re are still very much team “Americans should have the right to bear arms or arm bears” and again, think they have the slightest  f***ing right to rule over women’s bodily autonomy. Steven is the idolizer of Napoleon. Which raises a lot of questions. To be frank, there are a lot of “Wait, what?” moments that the audience might have appreciated being questioned. Directors Amanda McBaine and Jesse Moss instead take a solely recording approach, leaving the audience as flies on the wall throughout. Possibly, they want to keep the organizers on their side for any follow-up films. A Girls State would be a fascinating counterpoint.

Boys State both is and isn’t a microcosm of modern American politics. In the race for votes, we see the focus on soundbites, the compromising (and outright abandoning of principles) for the sake of votes, the use of attack ads, the use of racist attack ads…yet this is from one very specific sector of American society. It would have been interesting to compare such a Red State and male event with Boys State and Girl State gatherings in other parts of the U.S. It can be very disheartening at times to witness some of the attitudes on display but the viewer has to bear in mind that this isn’t how American politics as a whole is run. There’s still hope that René’s observation that “being called a fantastic politician isn’t a compliment” doesn’t have to be the way things are. McBaine and Moss have made what at first glance looks like a competition documentary but has far wider focus and will give every viewer a lot to think about.

Thank you for reading! What are your thoughts on Boys State? Comment below!

[…] a non-American, it’s interesting seeing Texas be such a conservative hotbed while also being a source of so much counterculture like this or […]

[…] my letter, I talked about the similarities between that character which was this sort of Reagan stand-in older actor kind of guy and the chief in this movie. I sent the letter and heard nothing, then […]

Great review of an absurd sample of good ol’ Amaricana. I always appreciate the worst realities delivered with a touch of humor that doesn’t undermine the gravity of the subject. I think, after reading this review, having just listened to “Nice White Parents” podcast from The NYT, this doc could make a decent double feature. NWPs also comes with its own sense of gallows humor– there a bit less enjoyable since it partly follows young idealistic parents from the 60s into old cynical, hypocritical older age and how that affected their participation in desegregation. Which is a bummer and so doesn’t have the possibility of growth these kids still possess. Anyway! Home sweet home. Always a revelation.