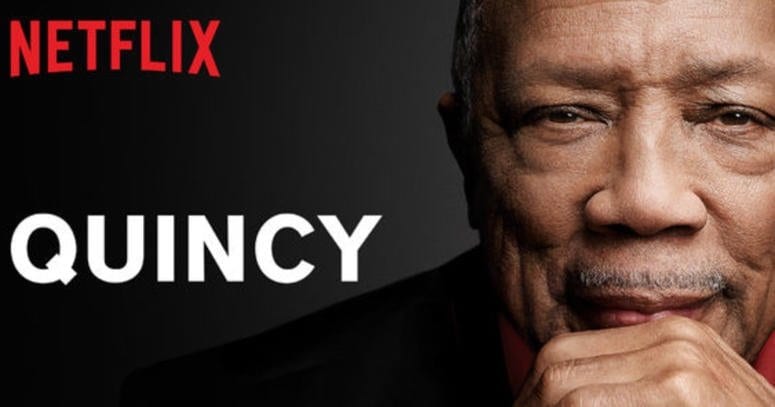 Younger generations may know the name Quincy Jones through his work with Michael Jackson, as the producer of The Fresh Prince of Bel-Air television series, or even as Rashida Jones’ father. Movie lovers may also know he scored more than 50 movies, including The Color Purple (which he also produced), In Cold Blood, The Getaway, and In the Heat of the Night. Regardless of where you know him from, you are likely to learn new things watching Quincy.

Directed By: Rashida Jones and Alan Hicks
Written By: Rashida Jones and Alan Hicks
Starring: Quincy Jones and Rashida Jones
Quincy is an unflinching look at the life of Quincy “Q” Delight Jones Jr., an iconic figure in music and pop culture for the past 70 years. Quincy takes the viewer on a journey through Jones’ life, with interviews, narration, music, and archival footage. It chronicles not only the successes and challenges of Jones himself, but also touches on 80+ years of American history. That sounds daunting, but the events are presented in such a digestible way, not one moment of the two hour run time feels wasted.

Rashida Jones (perhaps best known for The Office, Parks and Recreation, and Angie Tribeca) is the co-writer/director of Quincy. She is also one of Quincy Jones’ seven children. Sharing the helm with Rashida Jones is Alan Hicks, creator of the award-winning documentary Keep on Keepin’ On. That film focused on jazz legend Clark Terry, and blind piano prodigy Justin Kauflin, both of whom are also featured in Quincy. The aforementioned Clark Terry was a mentor to Quincy Jones when he began playing music professionally at the age of 14. Both Jones and Hicks seem more than qualified to tell this story, and they did an exceptional job bringing it to life. The things Quincy Jones has done is his career are so numerous, some are given as mere on-screen footnotes. Jones started playing music professionally at the age of 14, and by 18, was touring as a trumpet player for Lionel Hampton. He went on to arrange and perform with Count Basie and Frank Sinatra. In 1961, he became the first black vice president of a major record label (Mercury). He discovered Oprah Winfrey, and Will Smith as actors, when neither was known for that. He was the first black conductor of the Academy Awards orchestra. Perhaps most famously of all, he helped remake Michael Jackson into a solo superstar, and was at the helm for “We Are the World.”

All in all, Jones has had a hand in the recording of about 2,900 songs, and 300 albums. He is also arguably an “EGOT” (Emmy, Grammy, Oscar, Tony) winner, though some purists say his humanitarian Oscar doesn’t count. Either way, being an Emmy, Grammy and Tony winner isn’t bad.

Putting a Famous Face on Racism

Through this overview of Jones’ life, from the 1930s to the present, the viewer is given a glimpse into the African-American experience. This history is presented as it relates to Jones’ life, specifically, which puts a face to things that are sometimes more abstract. For example, white tour bus drivers had to purchase meals, and bring them back to the bus for the musicians, because they weren’t allowed to enter the restaurants themselves. Jones even recounts how he had to go live in France to study composing for strings, because black people weren’t allowed to do so in the U.S. Hearing things like that is hard at times, but it is very important to tell these stories. This documentary is about one man’s life, yes, but there is a much bigger picture to take in. Quincy balances the two aspects very well.

image via The Sound

One might assume that a life story made by its subject’s offspring can go one of two ways: Mommy Dearest, or hagiography. However, Quincy doesn’t really paint Mr. Jones with a devil or saint brush. It does omit Jones’ recent habit of gossiping about late celebrities to the press. Though infidelities are addressed, they are somewhat downplayed. And, of course, one can make the argument that the music industry is shady in general. Apart from those things, it is surprisingly candid for a daughter-made documentary.
Quincy’s numerous health scares are discussed throughout the movie. Some were even captured on camera as they happened, which is startling. It adds almost an air of urgency to the story, driving home the point that these stories need to be told now. Realistically, none of us truly know how long we have. However, for someone in their 80s with health concerns, the desire to tell their story must be very strong.

Some may say this documentary is an attempt to improve Jones’ public image, and perhaps that is true. However, there is still genuine grit to be seen beneath the gloss of PR. Quincy Jones is not someone who was handed his successes, he worked for them. Sometimes to the detriment of his own health or well-being. There is a balance to be had between confidence in one’s abilities, pride in one’s accomplishments, and one’s ego. There is a segment in Quincy, where Jones explains, “confidence is necessary… ego is overdressed insecurity.”

This movie is a celebration of life, with all of its tragedies and triumphs. The life happens to be that of a well-known person, who doesn’t have much of a filter when he speaks. Even so, Quincy feels genuine, not overdressed.

Thank you for reading! What are your thoughts on Quincy? Comment down below!