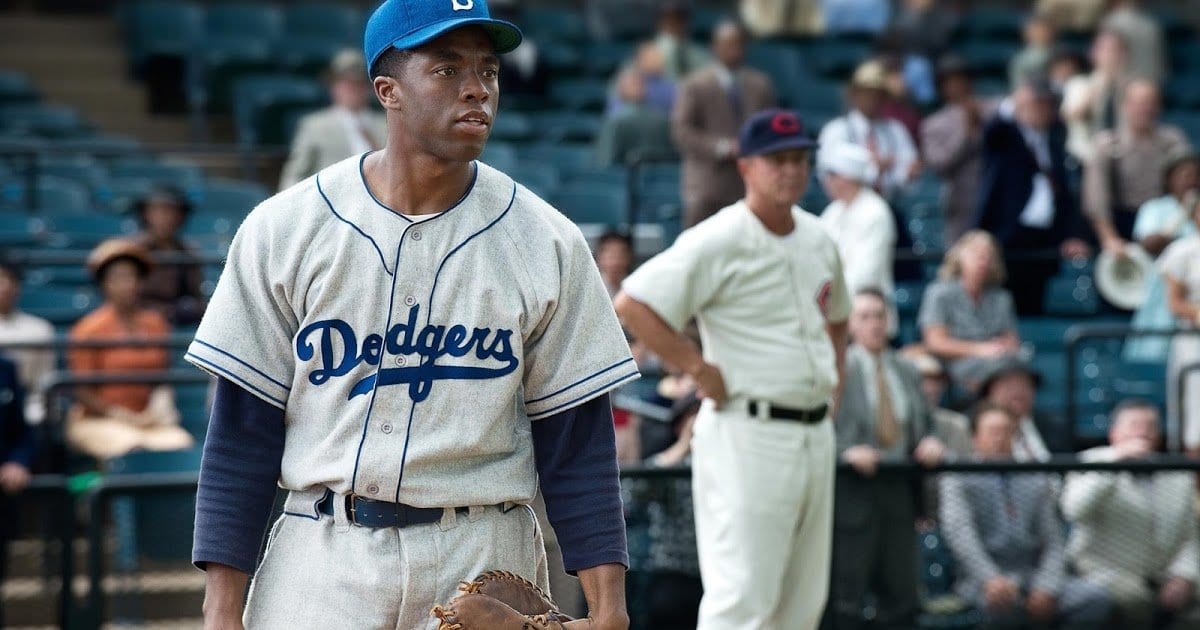 In his review of BlackKklansman (2018), starring John David Washington and Adam Driver, Collin Willis notes that recent films Get Out (2107) and Sorry to Bother You (2018) also address racial conflict past and present.  Here is a top 10 list of other films about race in America you may or may not have seen.

Is there one here you recognize as a favorite or one that you think provides the biggest impact on the topic of race?

Harry Belafonte, who has a significant role in Spike Lee’s current film, and has long been a contributor in the civil rights movement, has a starring role in White Man’s Burden (1995).  Co-starring John Travolta and Kelly Lynch, the story traces the hardships placed on Louis Pinnock (Travolta), a white laborer, by a black dominated society and the racial stereotypes the society perpetuates on those who do not look like them.  While White Man’s Burden didn’t make the top 10, I want to include it along with others which deserve honorable mention.  Also I’m excluding films on slavery because race isn’t given equal footing in those types of films.  Otherwise, 12 Years a Slave (2013) would be in the running.

Michael Weller adapted Ragtime (1981) from the namesake historical novel of E.L. Doctorow. It deals with race, culture and class during a period of tumultuous change at the turn of the 20th century.  Ragtime is worth seeing just to get a glimpse of Hollywood legends James Cagney, America’s Public Enemy (1931), who’s famous turn as George M. Cohan in Yankee Doodle Dandy (1942) garnered an Academy Award, and Pat O’Brien.  Watch it and you’ll also have the pleasant surprise of seeing Jeff Daniels, Fran Drescher, Samuel L. Jackson and John Ratzenberger in before they were famous appearances.  Eight Academy Award nominations serve as evidence that it belongs in the top 10. 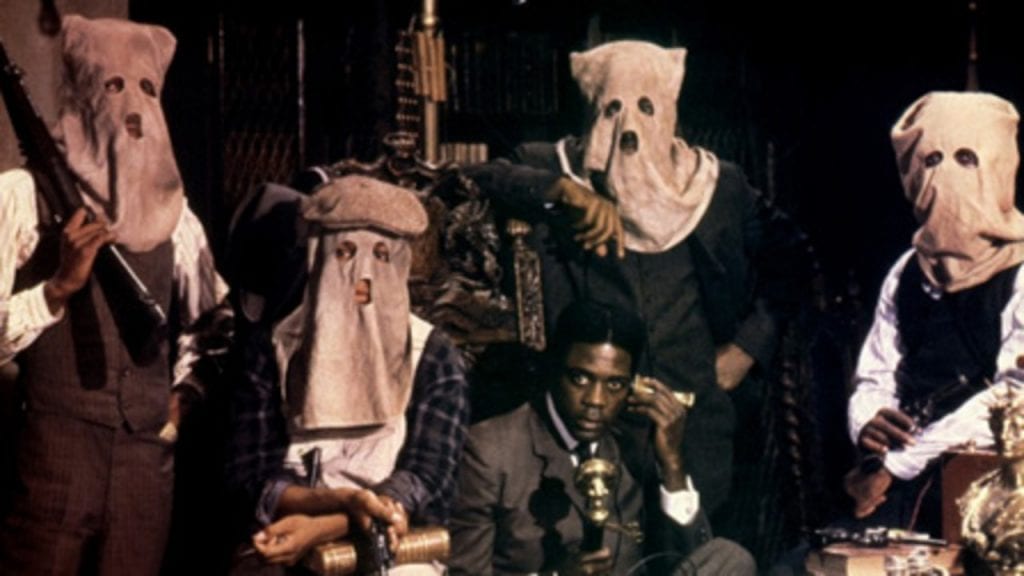 Produced, written, and directed by Spike Lee, the movie stars Danny Aiello, Ossie Davis, Ruby Dee, Bill Nunn, John Turturro, and Samuel L. Jackson in the memorable Brooklyn neighborhood drama.  I have no doubt that there are more than a few people who would place this at #1.  I won’t argue with them either.  There is so much about this film that deserves respect.  For me it addresses racial bias at the man on the street, everyday folk level, where it probably is most recognized, which adds to the entertainment quotient. 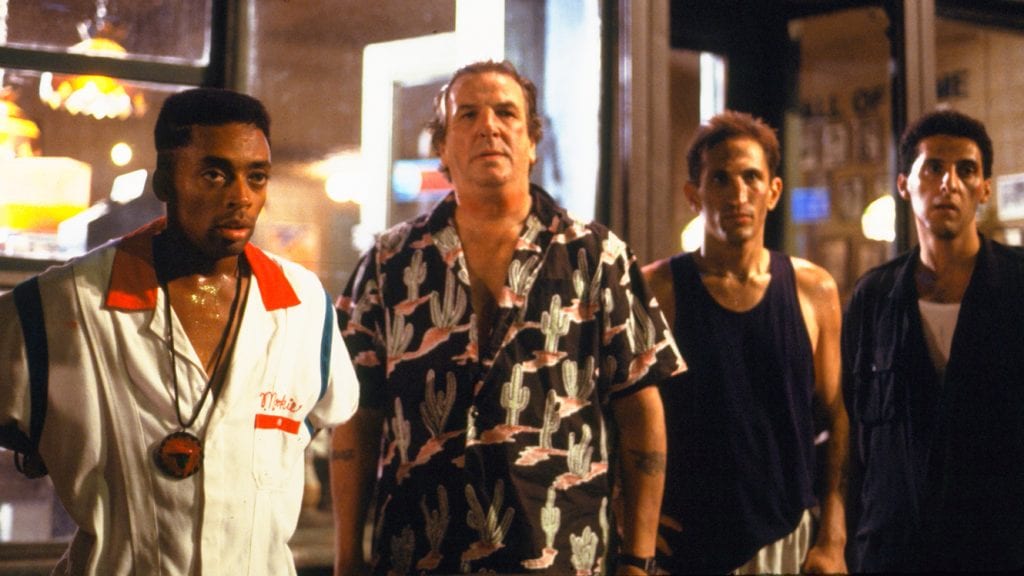 Starring Sidney Poitier, Shelley Winters and Elizabeth Hartman, this Guy Green film received five Academy Award nominations.  I identify with the message of this movie because it reminds us that the kindness of the human heart transcends racial barriers.  It would be sad to think that this is one of the forgotten films that has not stood the test of time or changes in America because the story still applies today in many ways. 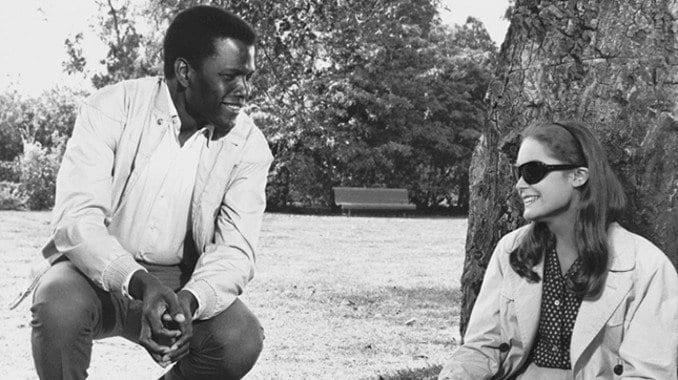 Steven Spielberg directed The Color Purple (1985) from a screenplay by Menno Meyjes based on Alice Walker’s Pulitzer Prize winning novel.  A vast and epic coming of age tale during the 1930’s, it addresses not only the issue of race, but domestic violence too.  If you haven’t seen it I recommend that you do.  If you don’t take my word for it consider its 11 Academy Award nominations. 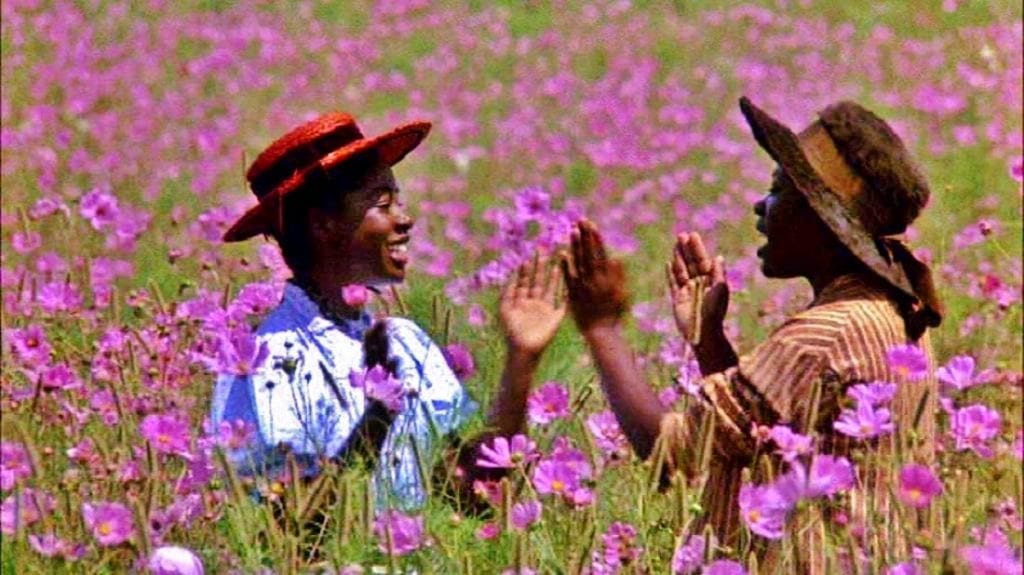 Perhaps the most artistically awarded movie about race is the best picture Oscar winner Crash (2004).  Paul Haggis, who produced and directed Crash, also shared a screenplay Oscar with Bobby Moresco.  What allows it to be emotionally impactful in ways that 42, Marshall and BlackKklansman can’t, is the fictional storytelling.  This frees Haggis to shape scenes in an effort to create the desired reaction in an audience.

Crash intentionally makes you uncomfortable, trying to reveal your biases to you while you watch.  With so much talk about the police and racial tension today, it might be a good time for a fresh look at Crash.  Use the police scenes to guide a discussion about what’s right, what’s wrong, and where we can make progress.  What I remember most about it is the great cast.  Sandra Bullock, Don Cheadle, Matt Dillon, Terrence Howard, Thandie Newton, and Ryan Phillippe helped make up one of the best ensemble cast performances ever. 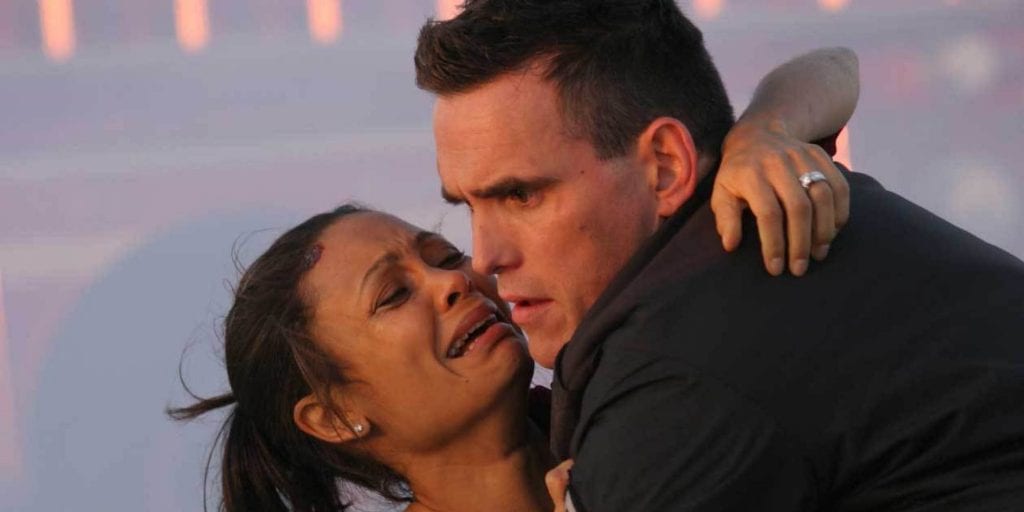 Starring Rod Steiger as bigoted southern police chief Gillespie who reluctantly teams with black homicide detective Virgil Tibbs (Sidney Poitier) from Philadelphia, this movie hit theaters in the heart of the civil rights era.  In the Heat of the Night clearly benefits from the acting performances of two of the best in the business.  But if you don’t appreciate how it covers the issue of race and authority, you ought to appreciate the contribution Warren Oates delivers in a supporting role. 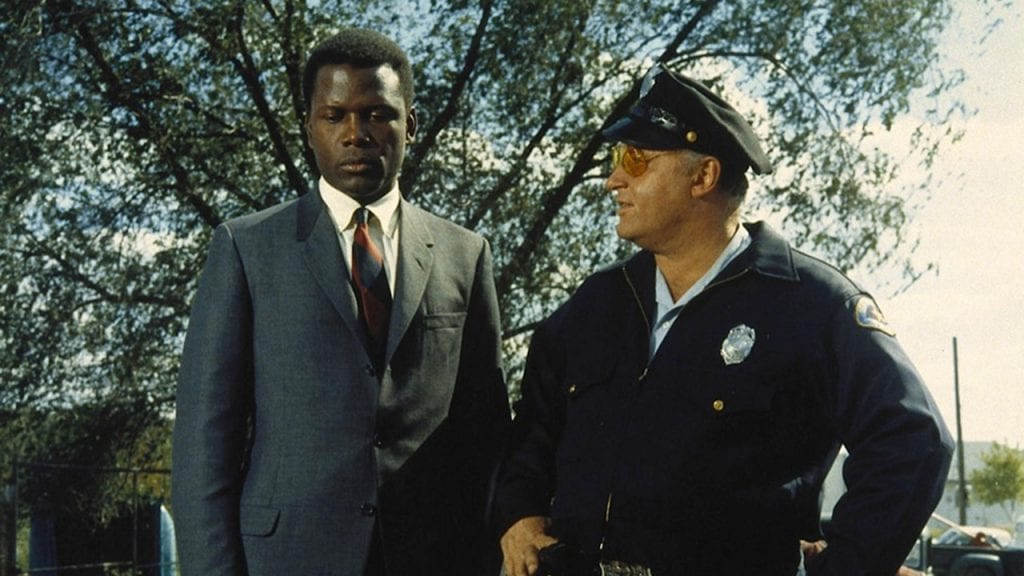 42 is one very highly thought of movie.  Written and directed by Brian Helgeland, it tells the story of how Jackie Robinson integrated Major League Baseball, and paid a price for it, because of those who expressed their racial hatred towards him.  It stars Chadwick Boseman as Robinson and Harrison Ford as Branch Rickey, the man who brought Robinson to the Brooklyn Dodgers.  The film’s potency is buttressed by the heroism and truth behind the real life history making story.  Remarkably, Boseman starred in a movie that got an honorable mention above, Marshall (2017). 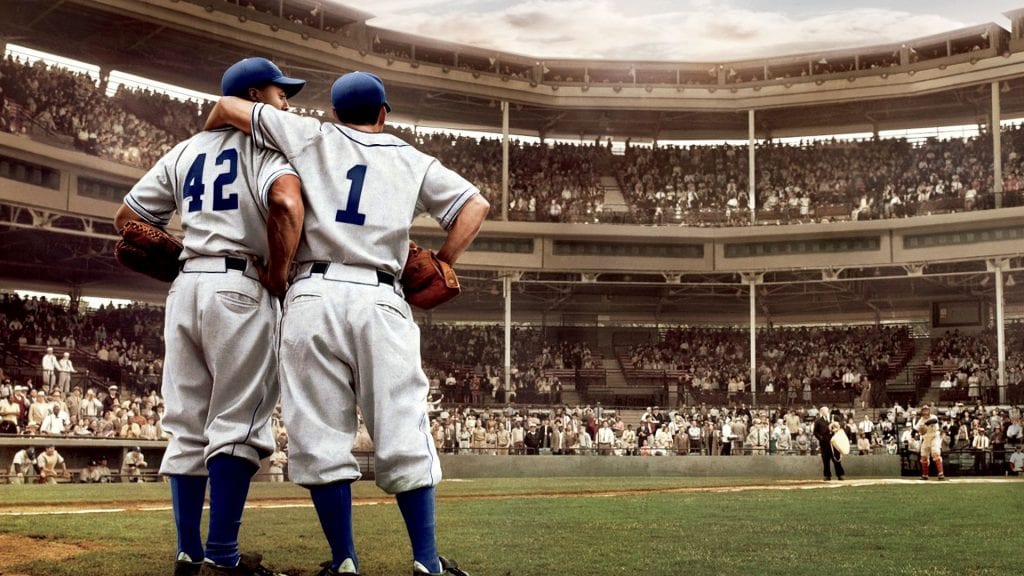 The military has a long history of being one of the pioneers in fighting racial discrimination.  I admire Red Tails, because this true story shows how adversity has been overcome by those with the courage to face it.  Here, war brought a common enemy that would ideally unite countrymen and cross the social barriers that prevented unity.  This story about the brave and heroic Tuskegee Airmen and their fighter squadron missions during World War II, starred Terrence Howard, Nate Parker, David Oyelowo, and Cuba Gooding Jr.

In case you hadn’t heard, John David Washington’s father has acted in a few movies too.   Denzel Washington stars in one of my favorite movies about race, Remember the Titans (2000) which made another top 10 list this year.

For me it is proof that truly inspiring stories of achievement in race relations come from the experiences of real people.  Those who endured the challenges of learning to overcome bias, discrimination and hate.  Will Patton, Wood Harris, and Ryan Hurst star as the coach and best players who must learn to put team first during the 1971 football season.  That year black and white high school students were brought together by integration and attended T.C. Williams High School in Alexandria, Virginia. 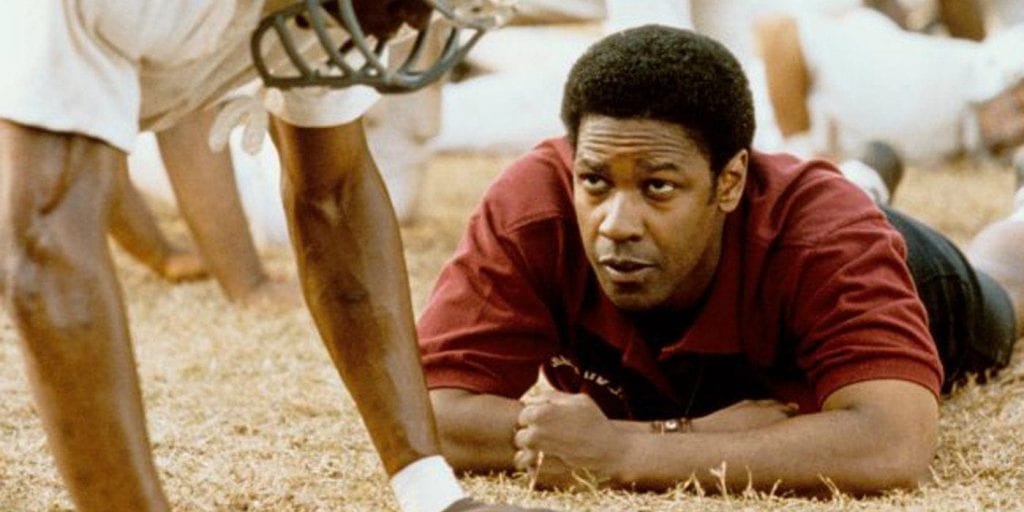 Why does it top the list?  Three reasons: Sidney Poitier, Katharine Hepburn, and Spencer Tracy.  This is an American classic.  It’s intelligently written.  I won’t state the obvious about the acting other than to say the supporting cast was also outstanding.  It was nominated for eight Academy Awards.  Honestly, I don’t even need to say more. We all know this movie is great!

Wow! Did I miss any?  Let me know which you remember most and why.  If BlackKklansman is helpful today for us to use to figure out where we can make progress, let’s hope it has joined a long and continuing line of quality motion pictures that attempt to better society by encouraging dialogue.

Thank you for reading! What are you thoughts on my top 10 films that take on race? What are your favorites? Comment down below!

This is a good list. Sidney Poitier was amazing.

Guess Who’s Coming to Dinner is a wonderful film! I wanna check out Ragtime; it seems interesting!

Mississippi Burning by Alan Parker, starring Gene Hackman and William Defoe as two FBI agents investigating the disappearance of Civil Rights activists in Mississippi. Based on actual events. Gripping from start to finish.

Can’t agree with #1. It’s well-intentioned but it struggles so clumsily to get its message across without offending the white audience (like making it very, very clear that Poitier isn’t one of those awful black people who protests, or have some issues with white people, etc.) that it flounders and sinks into mediocrity.