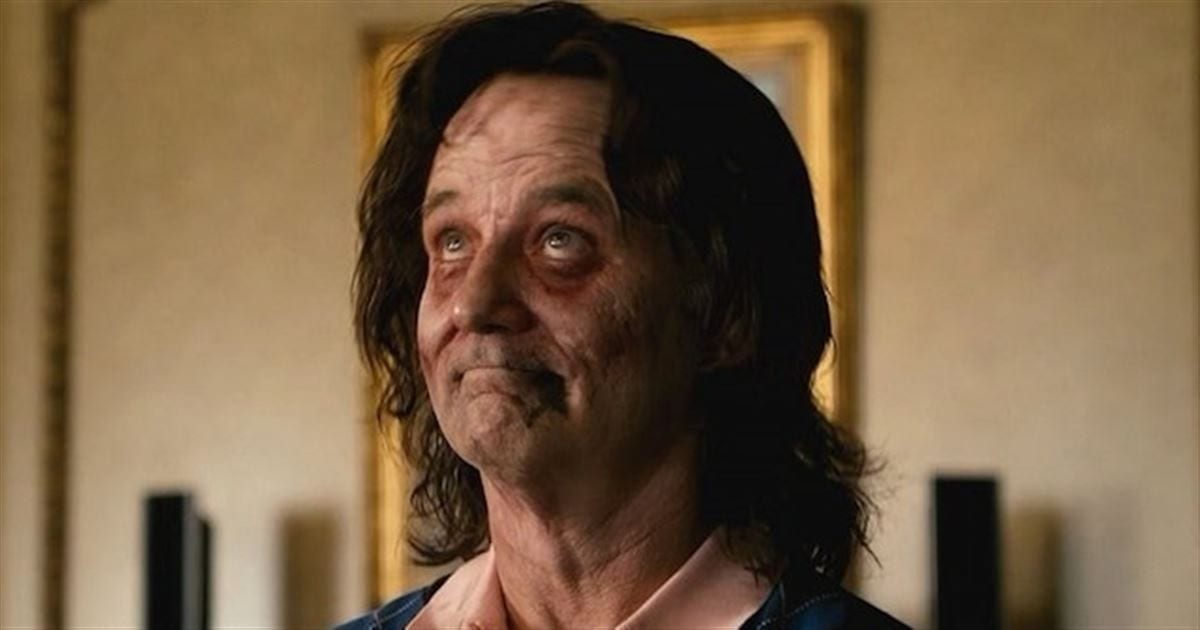 Cameos have become a popular aspect of the modern day movie, typically taking place in comedies. These cameo appearances allow audiences to feel shocked when they see their movie hero or music icon appear as themselves, usually in a ridiculous fashion. So, let’s jump straight in and take a look at the top 10 cameo appearances where celebrities appeared on screen as themselves.

Adam Sandler films may be far from a comedic genius but these mildly entertaining flicks do offer up many amusing moments. In terms of cameos, Adam Sandler films are usually packed full of famous faces: Bob Barker in Happy Gilmore, Billy Idol in Wedding Singer, John McEnroe in Mr Deeds, Serena Williams in Pixels, James Earl Jones in Click, and George Takei in You Don’t Mess with the Zohan…believe it or not, the list goes on.

Due to just how many cameo appearances exist within Adam Sandler films, I felt it was only fair to limit his movies to one slot on this list. It goes to Ozzy Osbourne in Little Nicky. With the villain of the movie having turned himself into a bat, Nicky uses the magical orb presented to him earlier in the movie. Lo and behold, out pops Ozzy Osbourne like a Pokemon out of a Pokeball. The metalhead sinks his teeth into the bat, playing on a story from 1982 whereby Ozzy, mid-performance, bit the head off a bat, allegedly believing it to be a prop.

I struggled to decide between two Eminem cameos: his interaction with Ray Romano in Funny People will always crack me up. However, as that’s an Adam Sandler film, I decided that the winner had to be his interview in The Interview. The movie stars James Franco and Seth Rogen as the brains behind an entertainment news channel. When the leader of North Korea, Kim Jong-un agrees to appear on the show, the pair are roped into an assassination plot.

All of this takes place after Eminem’s appearance on the show. The rapper opens up about his lyrics and discusses his hatred for old people and their slow driving. Eminem and Skylark (Franco) analyse some of his (fake) lyrics in search of the deeper meaning behind them. This leads to a shocking moment where Eminem comes out on air as being gay, blowing the minds of everybody watching. Later on in the film we also see a brief cameo from Rob Lowe who opens up about his baldness, removing a wig on camera.

The Ocean’s franchise is due a female-led reboot with Ocean’s 8 later this year. The success of the trilogy (which was itself a sort of reboot/remake) sets the bar pretty high. This tricky, action-packed comedy boasts stars such as George Clooney, Brad Pitt, Matt Damon, Julia Roberts and Andy Garcia to name a few. The middle film of the trilogy also included a surprise appearance from Bruce Willis.

In a bizarre moment where Julia Roberts is playing the character Tess Ocean who in turn is pretending to be a Julia Roberts…this marks a point where it seems like the plan couldn’t fail any more than it already has. That is until Bruce Willis appears. Apparent friend of Julia Roberts (at least within this film’s universe), offers to help the severely pregnant star. Leading to a highly entertaining back and forth as Julia Roberts tries to sell herself as Julia Roberts. This is an excellent cameo that any Die Hard fan would have been happy to see.

The Men in Black franchise has always had nods towards celebrities. Whether it be Andy Warhol being an MIB agent or Martha Stewart appearing as herself. Yet perhaps the most shocking pop culture reference was the appearance of Michael Jackson on a giant screen at the Men in Black headquarters. Men in Black 2 has been described by some as a “joyless cash grab” but you’ve got to love a good cameo.

We may only get a glimpse of the character as he tries to convince Z (played by Rip Torn) that he’s worthy of being an MIB agent. Michael Jackson even goes as far as dubbing himself Agent M just in case people didn’t recognize him…I think this is truly one of the more shocking cameos on this list. 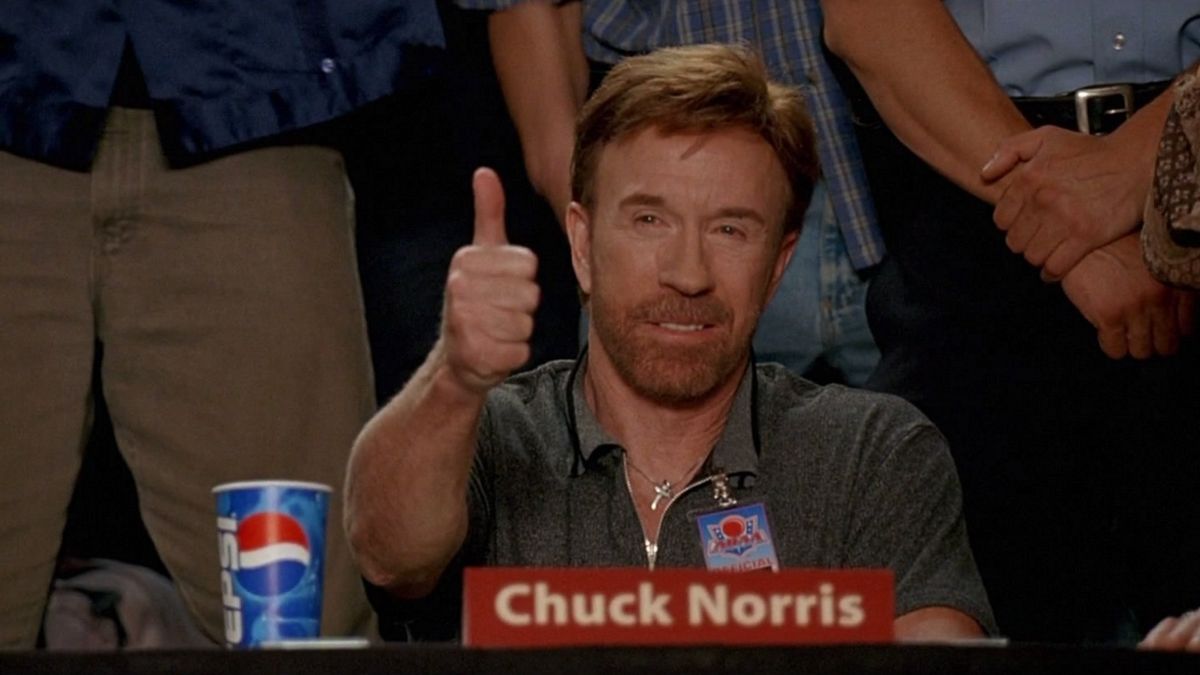 Men in Black 2 isn’t the only movie on this list with Rip Torn as a cast member. Dodgeball: A True Underdog Story tells the tale of a gym’s fight for survival in a national dodgeball tournament. The movie has a pretty high-end cast list with Vince Vaughn and Ben Stiller appearing as rivals. Not to mention stars such as Christine Taylor, Alan Tudyk and Justin Long.

During the finale of the dodgeball tournament, the underdogs of Average Joe’s Gym are set to forfeit depending on the outcome of a vote. One person you do not expect to find casting a vote is Chuck Norris. The action film star saves the day by casting the final vote in favor of Average Joe’s being able to play. All this comes after wise words from cycling’s Lance Armstrong, William Shatner appearing as the Dodgeball Chancellor and David Hasselhoff as the coach of the German dodgeball team. 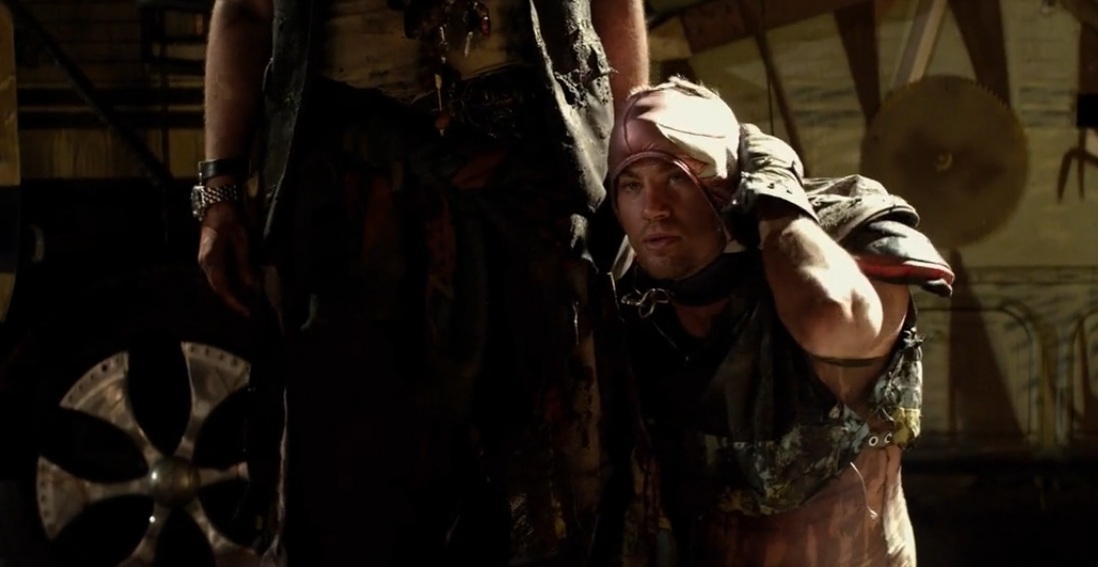 In a movie where every actor is playing a somewhat skewed version of themselves, it’s kind of hard to draw a circle around who counts as a cameo appearance and who doesn’t. I mean the opening of the movie has Emma Watson, Michael Cera, Christopher Mintz-Plasse, Rihanna, Paul Rudd, and Jason Segel. That barely touches on how many celebrities make an appearance as themselves in This is the End.

Considering the movie involves the rapture, the end of life on Earth and demons, there aren’t many characters who meet a happy ending. Least of all appears to be the chosen cameo from this movie: Channing Tatum. In the final moments of the movie, Channing Tatum appears on the leash of the leader of a cannibal group: Danny McBride. Appearing on-screen for only a brief moment, this scene isn’t quite as entertaining as it is disturbing.

2009’s The Hangover kick-started a trilogy that should probably have stayed as a one-off movie. The tale of a stag party in Vegas gone horribly wrong, this film was an instant classic (perhaps not in the traditional sense). With stars such as Bradley Cooper, Ed Helms and Zach Galifianakis, all this movie needed was a cameo. Who else would make a roofie-fueled nightmare crazier than Mike Tyson?

Having stolen Tyson’s tiger (unknown to them at the time), the group walk in to find Tyson in their hotel room listening to ‘In the Air Tonight’ by Phil Collins. As the group and Tyson sing a line of the song together, Alan (Zach Galifianakis) is the unfortunate recipient of an almighty Mike Tyson punch to the face. The blow is as violent as it is beautiful!

Very few would have imagined that a film about male modelling could be so entertaining. The tale of simpleton: Derek Zoolander (played by Ben Stiller). The gullible male model who can’t turn left and his rivalry with Hansel (Owen Wilson). The movie itself is full to the brim with references and cameos. You have conspiracy nut J.P. Prewitt played by David Duchovny who of course also plays another, more famous conspiracy nut: Fox Mulder.

That’s not to mention appearances from the current President, Donald Trump. As well as Christian Slater, Natalie Portman, Cuba Gooding Jr., Gwen Stefani, Heidi Klum and Paris Hilton. Shining above all the rest, however, is the appearance of David Bowie. Bowie shows up as himself to judge a walk off between Zoolander and Hansel and it simply adds to the hilarity and ridiculousness of the situation. 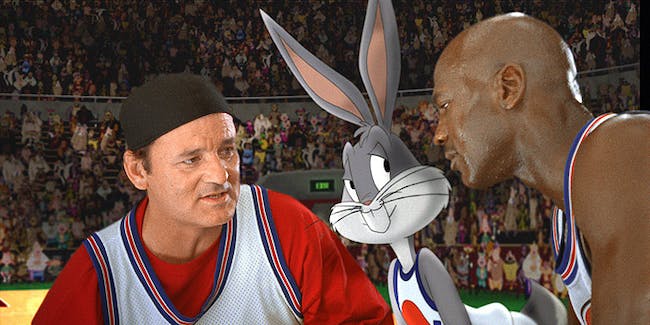 I’d be surprised if anybody here hasn’t seen the movie Space Jam: The comical story of the Looney Toons kidnapping Michael Jordan so they can play basketball against aliens. I mean what’s not to love? The combination of animation and live action makes for a truly entertaining movie. As far as cameo appearances go, this is without a doubt one of my favorites. Early on in the movie we see a retired Michael Jordan playing golf with the legendary Bill Murray.

As the movie nears its end, the Looney Toons are in need of a miracle. Most of their players are on their death beds and time is running out. The Toons are a player short when who appears out of nowhere: Bill Murray. Helping Michael Jordan to defeat the aliens, Bill Murray decides to quit while ahead and call and end to his basketball career. This isn’t the only time Bill Murray appears on this list (or the only time he is playing golf). There are many places you wouldn’t expect to find Bill Murray: Playing basketball against aliens alongside the Looney Toons and Michael Jordan is one of these places. Another is living a life of luxury in the middle of a zombie apocalypse…or maybe that’s exactly where you’d expect to find him. Zombieland follows a group of four as they make their way to Pacific Playland. Starring Jesse Eisenberg, Woody Harrelson, Emma Stone and Abigail Breslin, this is a film just calling for a sequel.

During a stop off in Hollywood, Tallahassee (Harrelson) chooses a star’s house to crash out. As they roll up to the gates marked “BM”. The character exclaims that “…it ain’t Bob Marley”. The group begin to enjoy the finer things in life at the expense of Bill Murray. When suddenly, a grey-skinned, dead-eyed zombie appears and is greeted with the swing of a golf club. Who is this zombie? None other than Bill freakin’ Murray (I’m paraphrasing a quote from the movie). With many references, including Ghostbusters, this cameo is in my opinion the greatest cameo to have graced our screens!

Thank you for reading! Are there any other great cameos that should have made it onto the list? Comment down below!

If you enjoyed this article, subscribe to MovieBabble via email to stay up-to-date on the latest content.

What topic should I discuss next? Whether it be old or new, the choice is up to you!

I love that Bill Murray is on this list twice!