‘Night of the Living Dead’ – The Father of the Zombie Flick 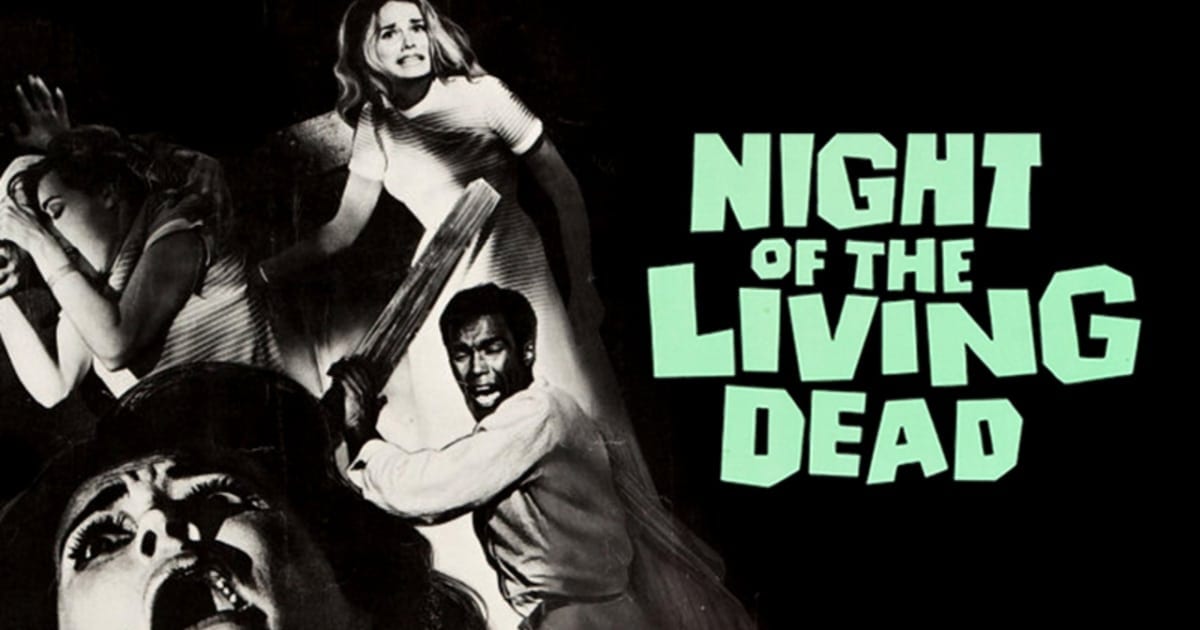 Fifty years ago, this month saw the release of a low-budget horror movie called Night of the Living Dead. The director, George A. Romero, and everyone involved did not anticipate how this film would become a horror movie classic, and it has gone on to inspire endless imitations and homages through to the present day.

Night of the Living Dead was by no means the first zombie movie, but it did establish certain traditions that have stood the test of time — the slow, shuffling walk, the cannibalistic tendencies, and their vulnerability to fire and bullets to the head. Its plot is basic — a small group of people in an isolated farmhouse fight off the zombies as well as each other. But is this a good movie as its reputation would say it is? Well, yes and no. (There will be some spoilers, so be warned.) 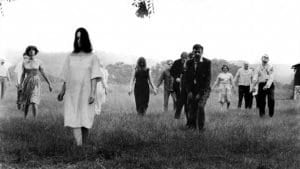 Let’s talk zombies. The film starts (appropriately) in a cemetery, and it starts small (with one reanimated corpse), an executed criminal that two workmen are about to bury. When he climbs out of his coffin the men (understandably) run away, leaving the zombie crim to stumble about until he runs into Barbara (Judith O’Dea) and her brother. (It is interesting to note that the zombies are never referred to as such in this film. They are called ‘ghouls’ or ‘flesh eaters.’) Most of the information about them comes from radio and TV, though the apparent reason of radiation from Venus makes just as much sense as the minor character of the pastor at the end insisting the whole thing is the work of the devil.

Fun fact: in the scene where the zombies munch on bits of barbecued people, apparently the actors are eating roasted ham covered in chocolate sauce. Apparently, it was a bit of a joke on set that the actors required no zombie makeup because the concoction was so revolting it was making them ill.

The zombies’ depiction is inconsistent — on two separate occasions corpses that should be reanimating don’t, for no apparent reason. They don’t seem to like light, and yet wander about in daylight. Ben says they make no sound, and yet later in the film they are moaning and groaning. But are the zombies really the main point, or are they just the catalyst for a very different discussion? 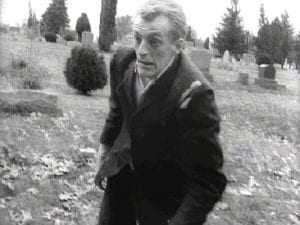 Barbara’s flight from the graveyard to the farmhouse leaves her in a catatonic state, so when Ben (Duane Jones) arrives, he can not get her to communicate. (Night of the Living Dead was one of the first films to star an African-American actor). Ben is a smart man who thinks on his feet. The rest of the cast is soon introduced with the discovery that they are hiding in the cellar. Harry (Karl Hardman) shouts that they must all go back to the cellar, an idea immediately vetoed by Ben who does not want them left without an escape route. Harry is more concerned about himself than anyone else, and he is antagonistic and resentful. Tom (Keith Wayne) has followed Harry’s lead, but now agrees with Ben, and seems to be easily swayed by whoever has the strongest personality.

Harry’s wife Helen (Marilyn Eastman) seems unimpressed by her husband’s bluster, and Tom’s girlfriend Judy (Judith Ridley) believes that no action is the best action. The child Karen (Kyra Schon) is sick. The bloody bandage on her arm tells the audience she has been bitten by a zombie long before it is mentioned, and I think even at the time the film was made this would have been an obvious red flag. When it is necessary to work together to survive these characters are quite incapable of doing so, which seals their fate. Had they kept their heads and worked together, they could have escaped, which in my opinion is the real story of this film, that people are their own worst enemies. 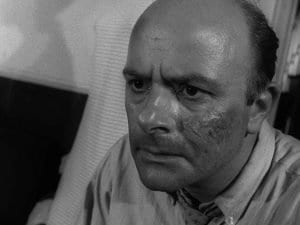 A visit to IMDB will give you an alarmingly long list of technical mistakes made in this film. Romero’s direction is excellent, but the script and acting both reduce the overall quality. Romero, along with John Russo, wrote the script, and the characters lack depth. The female characters especially do not fare well. We get little feel for Helen and Judy beyond what I have already mentioned. All we know about Harry is that he’s angry and scared. We know nothing about him other than this. Tom is a nice guy who does what he’s told. He’s brave. Again, that’s it.

Barbara starts well. We know she and her brother are there for their family, we know she is devout, and we know she is smart (releasing the hand brake on the car and allowing the slope of the road to help her get away from the zombie is good thinking.) While her shock reaction is psychologically sound it makes her a body on the couch for the remainder of the story. She is wasted.

Ben fares the best of all the characters. We know he’s very intelligent, he thinks on his feet and under pressure, he’s a leader, and he’s a decent man (the moment where he finds shoes for Barbara indicates this). There are inconsistencies in his character though, as he is shown to be very smart and yet does some obviously dumb things, such as when he fails to shoot zombies in the head even though he knows this is how to stop them.

The acting is very uneven. Judith O’Dea as Barbara is quite wooden in the opening scene. She improves after the attack of the zombie, and her escape from the zombie and journey to the farmhouse is an excellent sequence. However as previously stated she then has nothing further to do, so O’Dea has very little to work with. Keith Wayne and Judith Riley (Tom and Judy) are terrible, very wooden. It’s hard to tell whether Marilyn Eastman as Helen is any good or not as she also has little with which to work, and Karl Hardman as Harry has only two emotions, anger and fear, which makes his performance very one note and without nuance.

Duane Jones as Ben is the best performer here, though he has more to work with than everyone else. I will mention Russell Streiner, who plays Barbara’s brother Johnny, as in his one speaking scene he is far more animated than O’Dea, and he is of course the character who utters the oft-quoted line “They’re coming to get you, Barbara!” This is also a lovely example of irony, as moments after he utters this in fun, a zombie does, in fact, come to get them. 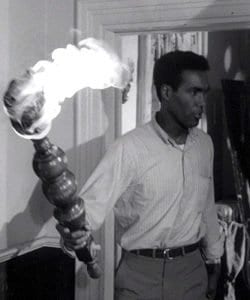 SPOILER ALERT! Ben is the last man standing after the zombie attack, only to fall victim to friendly fire when a group of civilians and police arrive. Romero always insisted that he did not intend this as a racial statement, but it makes such a good statement that it is hard to believe it was not intentional. After all, the black character is smarter than the white characters, outlasts the white characters, only to be shot by the ‘establishment’. The closing credits roll over stills of Ben’s body being dragged out with meat hooks to be burned with the other bodies, a tragic and horrifying image.

I do have an issue with the logic of this moment. Surely someone as smart as Ben, hearing the men outside and the gunshots, would shout out to them that he was there. He would not peer out and make himself a target. It’s an example of a character doing something to advance the plot without regard for the character as written.

Night of the Living Dead certainly deserves its status as a classic. It has had a huge effect on horror films in the fifty years since its release. It has a great many flaws, but it remains a horror cinema icon. 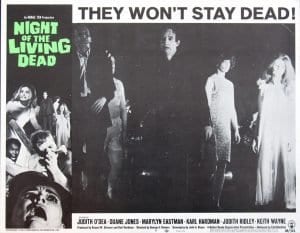 Thanks for reading! What are your thoughts on Night of the Living Dead’s 50th anniversary? Comment down below!

[…] Night Of The Living Dead. Paranormal Activity. The Blair Witch Project. All micro-budget horror films that made an absolute fortune at the box office. Which, unfortunately, leads hundreds of people to think making a horror film for three bucks is a lot easier than it is. And most of the results are dreadful. In the quality way, not the way you want a horror film to be. Does Habitual buck this trend? […]