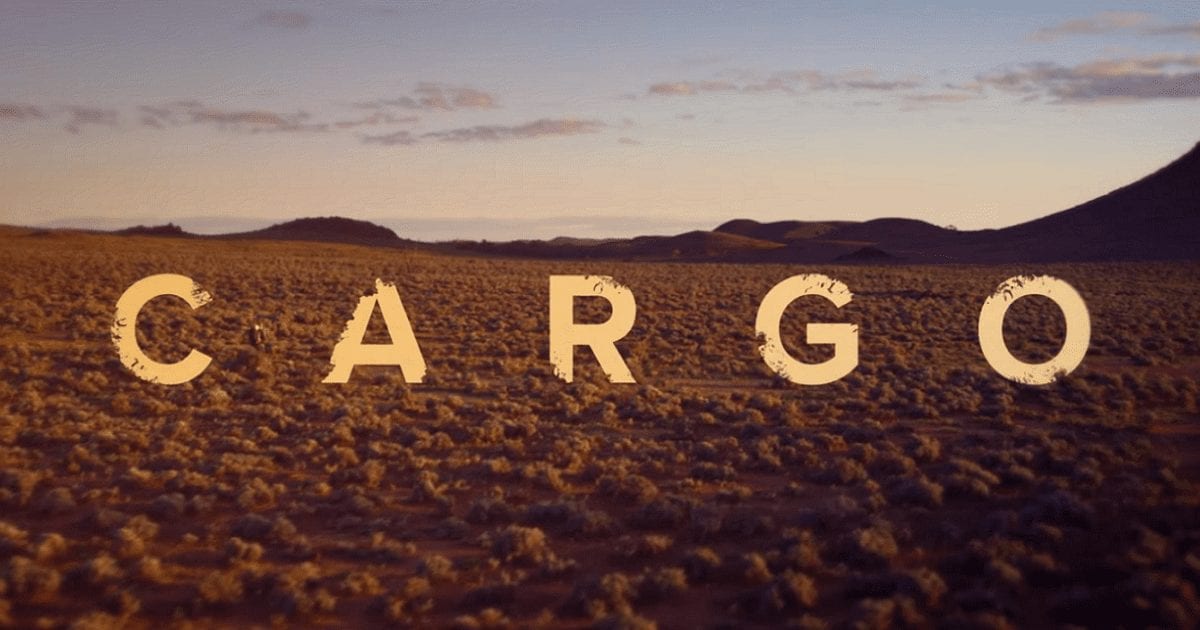 Back in 2013, Yolanda Ramke and Ben Howling wrote and directed the post-apocalyptic drama short, Cargo. When the short became a finalist at world-renowned short film festival TropFest and was then uploaded to their Youtube channel, it became a viral hit. The film got picked up and shared around by a number of pop-culture sites such as BuzzFeed, io9 and Cracked, helping the film amass over 14 million views online.

5 years later, Ramke and Howling’s feature length debut is an adaptation of their incredible short film, with Martin Freeman in the leading role and an international Netflix release on May 18th. That is unless you live in the film’s country of origin, Australia. It is the only country in the world getting a theatrical release.

A viral pandemic has spread across the country, turning those infected into the brainless, blood-thirsty undead. Andy (Freeman), Kay (Porter) and their baby daughter Rosie live in an abandoned houseboat on the river to keep themselves safe from those infected on land.

One day, when searching a nearby wrecked yacht for food and supplies, Kay is infected and Andy takes his family on land to get help. On their way to a makeshift hospital, Andy crashes his vehicle with his child and dying wife inside.

After regaining consciousness, Andy is bitten by his now zombified wife. With just 48 hours until he turns, Andy must trek across the unforgiving Australian outback to find someone to take care of his daughter before his time runs out.

As previously mentioned, Cargo is adapted from Ramke and Howling’s 2013 short film of the same name. The short is one of the most hauntingly beautiful and emotionally resonant seven minutes that I have experienced in my life and is the only zombie film to ever make me cry.

The main focus of the short is the undying love that a parent has for their child and the extreme lengths that they will go to and the sacrifices they make to protect them. Ramke and Howling stated in the Q&A before the screening for Cargo that they didn’t want the character of Andy to become a stereotypical, über-masculine, tough guy protagonist that you would see in most zombie films. Instead of a strong-bodied protagonist, they wanted one that was strong-willed, caring and sensitive. And Martin Freeman was perfectly cast and he is great in a role that really asks a lot from him.

Freeman is an incredibly talented actor. He is always such a likeable screen presence and he definitely plays to his strengths here. Despite not really playing against type, it was great to see Freeman, an actor with a more comedic background, pull off a very strong dramatic performance.

The fact that Freeman is also using his native British accent (as opposed to an Australian accent) adds to the Idea that Andy is someone who is lost. An outsider that has lost his wife and is trekking through a desolate, unforgiving foreign land to save his daughter, the only thing that he has left.

Thankfully, Howling and Ramke are smart enough filmmakers to know their audience and not to treat them like total morons. There is no cliché exposition dump at the beginning of the film via newsreel montage, a map with little red dots or narration of any kind to tell us about the world of the film or how the virus spread.  What little exposition there is in Cargo is done with subtlety and through the visuals.

It was so refreshing to see a film that didn’t force feed information that I could probably figure out myself. It shows that Howling and Ramke are very confident in their abilities as filmmakers and that they have a lot of respect for their audience.

Themes of Short Carry Over and More are Added for Depth

Survival is a major theme in most films of the zombie sub-genre. However, because the protagonist is doomed to become the walking dead, this isn’t really present in Cargo.

The emotional center of the bond between father and daughter that made the short so great, rightfully so, is the main theme of the film. We witness the incredible obstacles that Andy must overcome in order to keep his daughter safe from the monsters roaming the outback and the monster that he will inevitably become.

As you’d expect, to make the jump from a 7-minute short to a 105-minute feature, a lot will need to be added. Luckily, what is added does a great job of fleshing out and really building upon the world that the short created without unnecessary filler.

In his travels, Andy comes across Thoomi (newcomer Simone Landers), a young aboriginal runaway protecting her turned father from her own people who want to cleanse the land of all the zombies (or Virals as they’re credited in the film). She believes that people turn when they lose their soul and that her father can still be saved. This second father-daughter bond builds on the main theme of unconditional family love and depicts how powerful these relationships are in all people.

There are also themes of the mistreatment of the Indigenous Australians and very strong environmental messages present in Cargo. Mostly shown through the character, Vic (Hayes), a trigger-happy, fracking worker who is presented as the film’s antagonist. He’s not only violent and repulsive, but he also chains up aboriginal people in cages, using them as bait to attract zombies. These themes are further emphasised by a shot of an aboriginal flag on a gas drill with the words “Frack off” written on it, implying that it’s ruining their sacred land and has made the country sick.

Just when I think I’ve had enough of zombie films, a movie like Cargo comes along and shows that even a seemingly repetitive genre can be reinvented in new and interesting ways.

Cargo is ultimately a zombie film for people who don’t like zombie films. It’s a great adaptation of an amazing short film that adds many compelling story elements, while maintaining the heart, soul and emotion of the original short that anyone can resonate with. It’s one of my favorite films of 2018 so far and films like this make me proud to be Australian.

Cargo is available internationally on Netflix from May 18th, and in Australian cinemas from May 17th.

Thanks for reading! What are your thoughts on Cargo? Comment down below!

GO Australia! I finally had the chance to see it. I cried twice.

SPOILERS:
The first time when the baby was in danger towards the end. I couldn’t tale it. It was too intense.
The second at the end when Andy gets killed. I rarely cry during movies (although A Quiet Place was the one before it).

Absolutely loved reading this. I had no idea about the origins of this movie but I absolutely want to see it!

Thanks for reading! I hope you like it as much as I did.