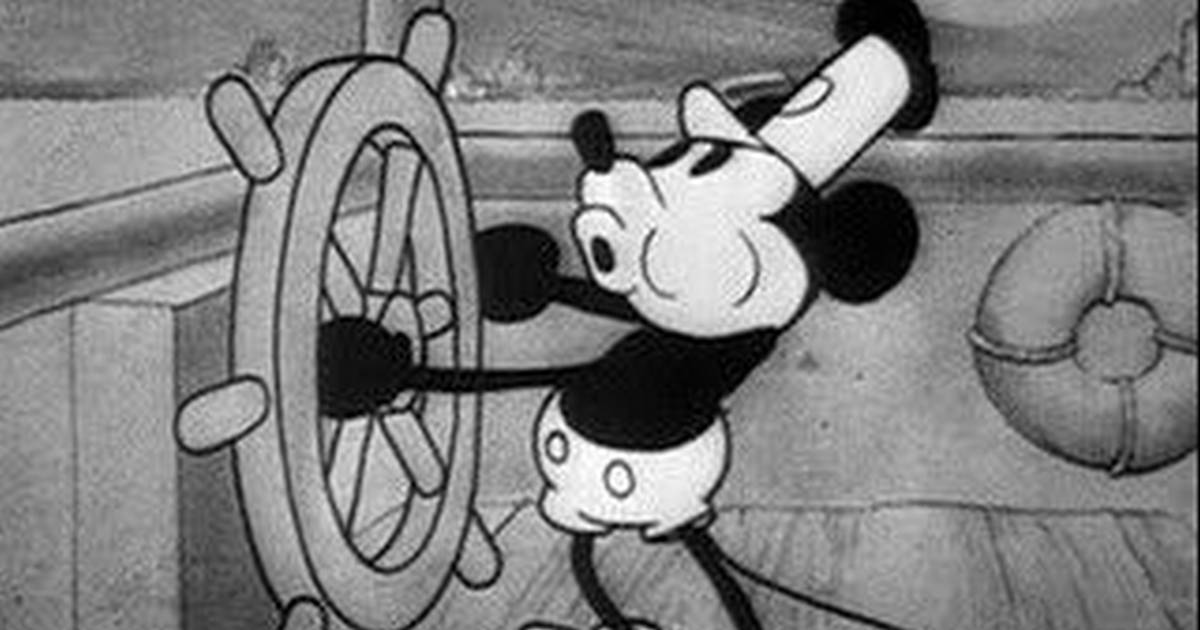 On November 18th, 1928, Walt Disney’s Steamboat Willie premiered at the Broadway Theater in New York. This short was one of the first fully synchronized sound cartoons, though that’s not the only reason why it’s remembered. It also introduced a little mouse by the name of Mickey to the world.

Walt Disney spent $5,000 to bring Steamboat Willie to life — that’s a whopping $78,279.35 when adjusted for today’s grosses. The results you can see for yourself:

While seemingly simplistic by today’s standards, Steamboat Willie marked a turning point in animation and film as a whole.

A Mouse Made Into an Icon

Steamboat Willie establishes everything you need to know about the character of Mickey Mouse. He’s inventive and has a heart of gold, as evident when he figures out how to work the ship’s crane to bring a late Minnie Mouse onboard. He has quite the mischievous streak; his first appearance has him pretending he’s the captain of the steamboat he’s piloting. When the real captain kicks him out of the bridge, Mickey dares to give him a raspberry when his back’s turned. He utilizes the boat’s cargo, a herd of farm animals, as musical instruments for his and his girlfriend’s amusement. And let’s not forget his abuse towards that mocking parrot. Through all the roles Mickey’s played over the decades, he’s rarely been without these famous qualities.

The short also introduces us to Mickey’s future long time arch-nemesis Pete and eternal love interest/distaff counterpart Minnie. Like with our protagonist, Pete’s appearance here sets the foundation for his bullying, blowhard persona. Minnie, on the other hand, is sadly underutilized; she’s mostly there for Mickey to solve her problems and flirt a little in gratitude. There’s almost nothing to go by in terms of personality, but that’s the way when you’re playing second fiddle to the world’s most famous mouse. 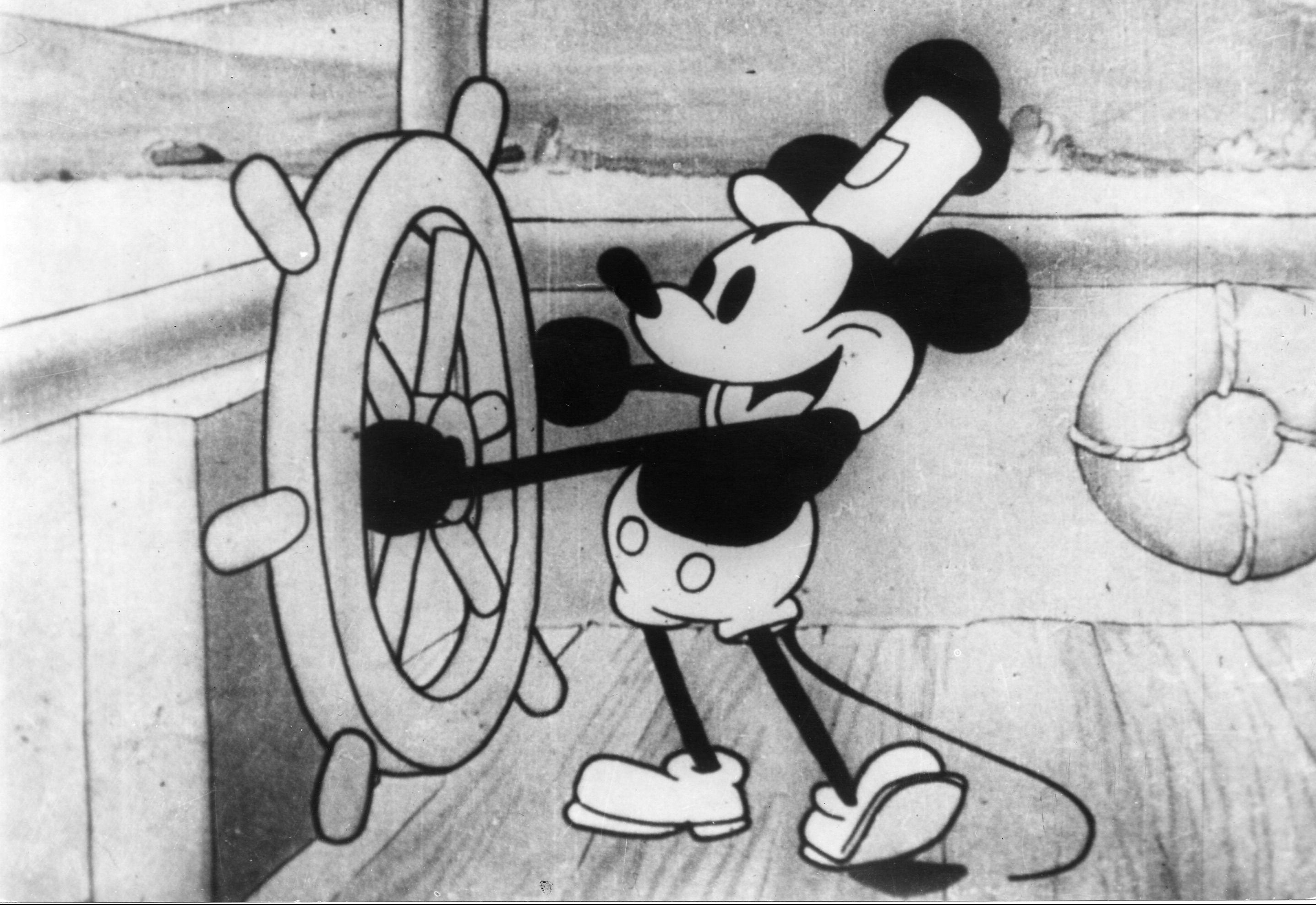 This in conjunction with The Jazz Singer released one year prior further spiked the popularity of “talking pictures”. It’s not the first full-sound cartoon; that honor belongs to Fleischer Studio’s bouncing ball sing-along of “My Old Kentucky Home” released in 1924. Steamboat Willie by comparison is in a class all its own. The characters’ little noises that stand in for dialogue as well as various sound effects all sync with the animation naturally. Its use of sound underlines the gags. This technique of matching the music to the action on screen beat for beat would give rise to the term “Mickey Mousing”.

There was doubt among investors that audiences would enjoy a cartoon that incorporated sound this way. In order to prove them wrong, Walt Disney held a test screening featuring a partially completed, silent version of Steamboat Willie. From behind the screen, he, his brother Roy, and a handful of animators provided the sound effects and music. The response was overwhelmingly positive.

Walt financed the official recording of the soundtrack from his own pocket, even going as far as selling his own car in order to raise funds. This dedication to quality paid back in kind; Walt received a generous sum of $500 for every screening of Steamboat Willie during its two-week run time. Its success resulted in Walt returning to two of Mickey’s earlier shorts, Plane Crazy and The Galloping Gaucho, and redubbing them as sound cartoons. 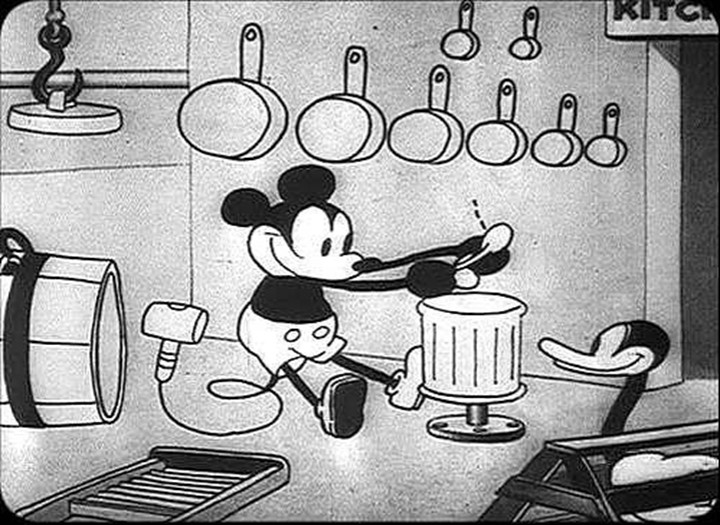 Sailing Towards a Bright Future

The impact of Steamboat Willie is felt nine decades later. Mickey has not only gone on to be the face of The Disney Company; he is one of the most recognizable characters in the world. Beginning with 2007’s Meet The Robinsons, the infamous whistling Mickey has opened every animated Disney film. At the Mickey: The True Original exhibit currently in New York, there’s an ongoing display of re-interpretations of scenes from Steamboat Willie. It is one of the exhibition’s highlights.

Cartoons might never have found a voice without the popularity of Steamboat Willie. So here’s to 90 years of music and fun with a playful little mouse. Happy birthday, Mickey.

Thank you for reading! What are your thoughts on Steamboat Willie? Comment down below!

We watched this in my Speech class; our teacher put it on for us one day.