It’s that time of year again. The 66th annual Sydney Film Festival has just kicked off for another year. Screening from June 5-16, The 2019 program boasts an impressive lineup of over 250 of the most exciting, strangest and greatest films that cinema has to offer from around the world.

Although I am sadly unable to attend this year, SFF have very kindly given me the opportunity to preview a handful of films playing at this year. Here are a few films to look out for:

There has been a notable resurgence of Giallo-inspired genre films over the past few years. Films such as Piercing, Knife + Heart, and Luz  wear their influences from 60s and 70s Euro-horror and exploitation cinema on their sleeves. British filmmaker, Peter Strickland is someone whose love for this cinema is unparalleled and is expressed with passion and style in his work. His latest film, In Fabric evokes the essence of these films through the lens of supernatural absurdist horror comedy.

The film chronicles the lifespan a haunted red dress as it passes from person to person, with each owner facing the dress’ supernatural and devastating consequences. It’s a premise better suited for an episode of the 90s Goosebumps series rather than a stylized genre film. Strickland never fully embraces the absurdity, camp or ridiculousness of both the story he is telling and the style he is emulating.

The film’s synopsis would suggest In Fabric is an anthology film of how this cursed dress has affected the lives those who wear it, but it isn’t. For the first half, we follow a lonely, divorced, middle-aged bank teller named Sheila, who purchases the dress to wear on a date. So much time is spent establishing her character and making the audience care for her, and when the dress falls into the hands of someone else at the halfway mark, the film comes to a grinding halt. Instead, we get a beat-for-beat retread of Shelia’s story with a character that is astronomically less interesting.

Had Strickland stuck to just the one story, or even had made an anthology film or TV miniseries of this dress hopping between owners throughout history, it would have been more concise and engaging.

That being said, that first half is wonderfully strange and oodles of fun. The Interactions between Sheila and this witch-like shop attendant are thoroughly enjoyable while eliciting an underlying creepiness. The visual comedy of the dress’ movements always lands and the Giallo-inspired visuals are creative and stylish without feeling like a pastiche of the works that inspired Strickland.

It’s all over the place in terms of tone and pacing and there are some bizarre scripting and directorial choices (good and bad), but In Fabric is ultimately the 2019 absurdist horror film we were hoping Velvet Buzzsaw was going to be. Overlong and inconsistent, but enjoyable genre fair nonetheless. 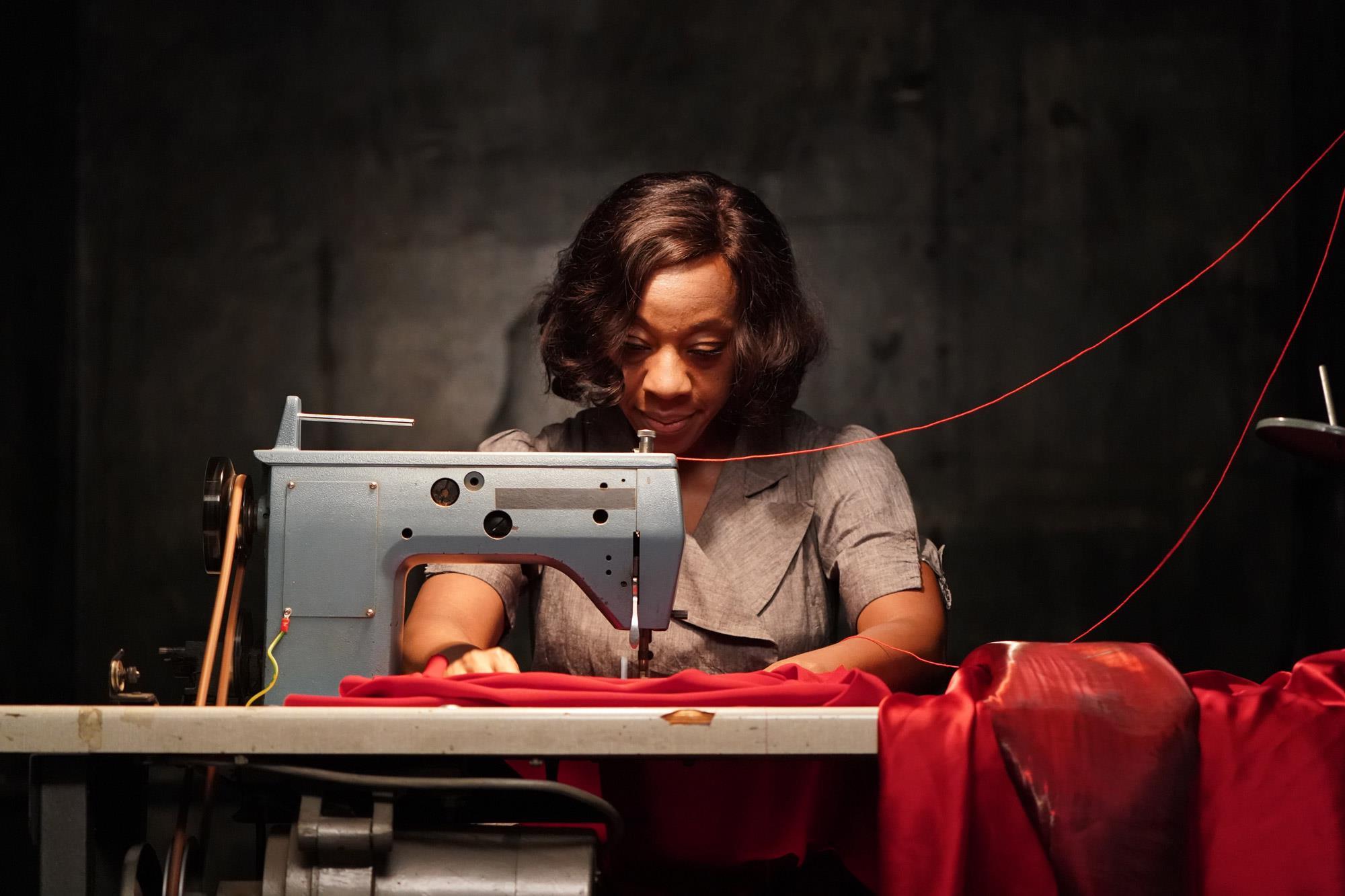 The Sydney Film Festival prides itself on the number of quality Australian productions they screen each year. One of the most notable Aussie films at the festival in 2019 is this politically charged dramatic mystery that puts the spotlight on social and institutional Islamophobia in Australia.

French filmmaker, Partho Sen-Gupta writes and directs Slam, the story of a Palestinian refugee, Tariq. He has proudly assimilated into Australian culture and owns a Sydney coffee shop with his pregnant wife. However, when his estranged sister Ameena, a politicized slam-poet disappears after a gig one night, Tariq is forced to confront his own identity as he, his mother and a troubled police officer desperately search for Ameena.

Sen-Gupta does not hold back in depicting the Islamophobia and Xenophobia of Australian society, particularly in the film depiction of the media. News broadcasts of an Australian Soldier captured in Syria, a continuous radio debate over citizenship for Muslim immigrants and news outlets speculating Ameena was radicalized and fed the country to join Islamic State are all heavy indictments on the Australian media. Though blunt in its execution, the film’s political commentary never feels overstated, didactic or as if the filmmaker is lecturing the audience.

The most captivating aspect of Slam is not the mystery of what happened to Ameena, but rather Tariq’s journey and his crisis of identity. Tariq is described at one point as a Coconut; brown on the outside and white on the inside. He is married to an Australian woman, he goes by the more anglicized variation of his name “Ricky” and he rarely visits his family. But when Ameena disappears, he reconnects with his mother and progressively begins to rediscover his cultural identity. It’s a fascinating exploration into the identity crisis of a migrant, and actor Adam Bakri does fantastic work in portraying Tariq and nails this aspect of the character.

Tariq’s arc is complemented perfectly by the story of Joanne, the police officer leading the investigation into Ameena’s disappearance. Sometimes the editing makes her scenes feel slightly out of place and breaks the flow and rhythm of the Tariq’s story, but the scenes with her and her alcoholic ex-husband are tense and never feel extraneous. Revelations of her tragic backstory in the third act help generate a greater sense of thematic depth in the narrative.

Many contemporary political films make the mistake of existing only to making a political statement and forget to tell an engaging story to back it up (cough BlackKklansman cough). Slam is a film that avoids these pitfalls and becomes riveting and sometimes confronting look of a migrant’s experience with Islamophobia and Identity.

Film Festivals are an amazing opportunity to witness new and emerging filmmakers from anywhere in the world. At the age of just 23, Japanese filmmaker Hiroshi Okuyama is already being touted as a successor to the likes of Takashi Miike and Hirokazu Kore-eda as Japan’s next great cinematic auteur with his heartwarming debut film, Jesus.

The film follows 9-year-old Yura, a young boy whose family moves from Tokyo to the countryside to live with his grandmother. Yura struggles to settle into his new school, especially since it’s a Christian institution. But when Jesus himself appears before Yura during prayer in the form of a tiny three-inch man, he quickly comes to faith and Jesus becomes his friend that grants his every wish.

Dedicated to his childhood friend, Okuyama brilliantly captures a sense of nostalgic beauty in the way he depicts childhood friendship. The purity and innocence of the friendship that Yura has with one of his classmates is incredibly palpable and genuine, it is sure to inspire audiences to reconnect with old friends that have not talked to in years.

Surprisingly, the aspect of Jesus that feels most out of place is the titular son of god himself. Australian-born Manzai comedian, Chad Mullane is very energetic and has an immense amount of fun with the role, but his presence in the film is fairly weak. Jesus is only really used for sight gags and exaggerated, but effective physical comedy, as well as granting Yura’s wishes when he commands it. Especially when the film takes a more dramatic turn in its latter stages, Jesus could have been used more and had more agency in the plot.

Overall, Jesus is a much better film about friendship than it is about faith or religion. It could have been a great film about both, but Okuyama has given us a more than a glimpse of his incredible talents as a filmmaker and the amazing career he is sure to have.

These are just three of the 250+ feature films and documentaries screening at the 2019 Sydney Film Festival, playing from June 5-16. To see the full program or to buy tickets, head to https://www.sff.org.au/

Thank you for reading! What are your thoughts on The 2019 Sydney Film Festival? Comment down below!