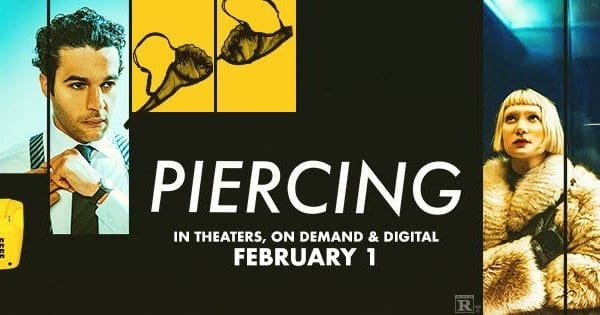 Reed (Abbott) is a businessman with an uncontrollable obsession and desire to kill. One night, he leaves his wife (Costa) and infant daughter to go on a “business trip” to a hotel and undergo a sinister plot to fulfil his psychopathic tendencies; murder a prostitute.

However, a spanner is thrown into the works when escort, Jackie (Wasikowska), knocks on his door and Reed’s plan won’t be as straightforward as he thinks.

Piercing is adapted from the 1994 novel of the same name from Japanese author, Ryū Murakami. Muramaki is most known for his novel  Audition, which was adapted into the incredibly disturbing and graphic 1999 film of the same name by Takashi Miike. So understandably, early reviews for Piercing out of Sundance this year had drawn similarities to Miike’s adaptation.

Director, Nicolas Pesce is horror filmmaker on the rise. This is his sophomore outing as writer/director after his monochrome, nightmarish debut, The Eyes of My Mother in 2016, which I’m now very interested to seek out. Pesce’s next directorial project will be an English language reboot of the Japanese horror franchise, The Grudge. Piercing is essentially a love letter to the over-the-top, 70s Italian exploitation or ‘Giallo’ (Italian for Yellow) cinema and an homage to the filmmakers from the genre, such as Mario Bava, Sergio Martino and Dario Argento.

Pesce has done a terrific job of making a technically and aesthetically interesting film with a considerably low-budget. The implementation of low-fi, 70’s motifs such as the use of a deep red color palette, the bold yellow text in the opening credits, the use of miniatures for a majority of the exterior and establishing shots all make Piercing feel like a film from a bygone era. Despite heavily borrowing from the films in the genre it is paying homage too, Piercing never feels like a retread or a rip-off of any of these films and it manages to establish its own personality.

Points to this film as well for opening with an 80’s VHS style “And now, for your feature presentation….” title card that was all tacky and grainy. That was a nice touch. However, that made me start to think that the whole movie was going to have this purposefully cheap and grainy film look to it, which it doesn’t really have. Perhaps the filmmakers saw that angle as too gimmicky, but I thought that would’ve been really cool. That being said, the cinematography is quite good and is very slick and clean, even with all the horrific and messy things the camera is capturing.

Not as Graphic or Violent as Expected, and All the Better for It

As soon as this film opens with Reed standing over his daughter’s crib, intensely staring at her while she sleeps, holding an ice pick in his hand and contemplating whether or not to kill his child, you get a good idea of what you think you’re in for when you see Piercing. However, the film is very smart in the way that it plays with your expectations.

Personally, I’m not great with gore in films (hell, Martin Scorsese’s debut short from the 60s, The Big Shave almost made me pass out). So for this film, I purposefully went in on an empty stomach and sat as close to the back of the cinema as I could. But, almost disappointingly (because I prepared), the film is not very graphic or violent. Plus, anyone within a three row radius of me in the theater could hear my stomach rumbling — I was that hungry.

When the film get violent and gory, it’s quite impactful and visceral (see picture below for an example). But it’s the tension and the suspense that just keeps slowly and methodically building throughout the film that makes Piercing such an intense and unnerving cinema experience. The character dynamics between Reed and Jackie are a little ambiguous, but at the same time, completely riveting. The constant power struggle between the two of them is fascinating to witness on screen and keeps the audience guessing as to who really is the Hunter and who’s the Prey.

Piercing Will Stay With You Long After You’ve Seen It

This is one of those rare cases of a film that sticks around in the back of your mind for weeks, even months after you have seen it. And the more you think about it, the better it gets.

The performances from both Abbott and Wasikowska are fantastic. Abbott brings this sense raw intensity to his role, as this man who is desperately trying to contain his murderous bloodlust, but looks like he could snap at any moment. Wasikowska’s performance threw me off a little bit at first, as her accent is very inconsistent. Some moments she is using an American accent, other times she is using her native Australian accent and a few times, a strange combination of the two. However, whether it was intentional or not, I find that it really adds to the mysterious nature of her character and makes her much more compelling.

The music and sound design of this film is just impeccable. Much of the film’s soundtrack comprises of music from the likes of Ennio Morricone, Bruno Nicolai and Goblin, whose work frequent appeared in 70s Giallo cinema. This frenetic piano score really elevates the tension of the film. Despite having no original music, Piercing has one of the best soundtracks of the year so far.

And that sound design. Ohh man, is it great. You don’t often hear critics or reviewers talk about sound design unless it’s bad. And for a good reason. Good sound design is not meant to be noticed. However in Horror, sound design is extremely important and when done right, the sound is often more frightening than the visuals. This is what Piercing does so excellently.

There is a sequence early in the film where Reed first arrives to the Hotel and he goes through his murder plan, step by step, miming every single action. The foley artist must have had a field day with this scene because all the brutal, gruesome, gory sounds, like sawing off a head or a blood going down a drain are present in this scene, even though there is no violence onscreen. It was the standout scene in the film and a great moment of dark comedy.

While not my favorite film that I saw at the Sydney Film Festival last year, Piercing is a film that I immediately feel the need to watch again. It’s an incredibly stylish and very, very entertaining psycho-sexual thriller that borrows a lot from Italian Giallo films of the 1970s, but is not completely derivative of them and manages to establish its own identity. And at a very short runtime of just 81 minutes, it is a film that does not waste a single moment in telling it’s incredibly tense, darkly comic, contained story that I’m just itching to see again. Thanks for reading! What are your thoughts on Piercing? Comment down below!

Where can I find this film? I can’t find it anywhere!!!

Sorry for the late reply. It has been doing the festival circuit all year. As for its release, It is coming out in the US in theatres, on demand and digital on February 1 and a limited theatrical release in Australia on January 10.

I hope this helps. Here’s a link to the trailer if you’re interested
https://www.youtube.com/watch?v=7pj5u4r_eSE

I found everything about this film awesome! It’s absurd and gory in a unconventional way, as well as stylish and well-acted. As a leading man, Christopher Abbot has a magnetic presence throughout. Highly recommended, especially for horror fans that are tired of generic flicks within this genre.

Thanks for the review. I’ve just booked my sessions for the Melbourne International Film Festival (78 over 16 days because it’s good to have goals) and Piercing was on my shortlist but I ended up sacrificing it for Thoroughbreds. It’s so hard to narrow down the choices and I always feel I am going to miss something great. Your review makes me want to see Piercing but maybe not enough to change it. What did you see at the Sydney Fest that you loved?

78 films? Yikes, I’m seeing 31 and I think that’s too many. I want to see it again at MIFF, but I’m seeing Climax in that slot and the other session is way too late. I’m officially covering the festival here on MovieBabble as accredited media, so I’ll be writing a lot of reviews.

I saw a lot of great films at SFF. I did a couple of episodes on my podcast talking all about those if you wanna hear more (link at the bottom of this comment). Most of what I saw in Sydney is playing in Melbourne or has already been released. A few films I saw in Sydney that I loved like Cold War, I Used to be Normal: A Boyband Fangirl Story and The Man Who Killed Don Quixote, I’ll be seeing again in Melbourne.