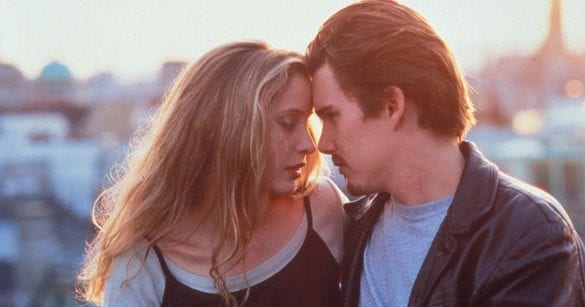 In the interest of full disclosure, I must tell you that what drew me to this movie was its title. One of my favorite albums of all time is by a band called Dead By Sunrise. So, here I am, finally seeing a movie that just celebrated its 25th anniversary, because the title intrigued me. I was 16 years old when Before Sunrise was released. Excuse me while I have a slight existential crisis over that math.

As many of you know, Before Sunrise kicked off a trilogy, with Before Sunset (2004), and Before Midnight (2013) following. There are nine years between each film, and they take place in real time (so the actors and their characters are also nine years older each time). The entire trilogy stars Julie Delpy and Ethan Hawke, which is nice, considering many sequels are lacking the original cast. Rarer still, all three were directed by one person: Richard Linklater. I haven’t seen said sequels yet, but after seeing this one, I surely will.

The Conversations Are the Story

By far, the biggest strength of Before Sunrise is the dialogue, and its delivery by the actors. It has to be, as the words are really all we have. It almost feels unscripted at times, as if Linklater just said, “talk,” then sat back and watched. There are times, especially near the end of the movie, where things become a bit more fanciful. Overall, though, it’s like watching real people have a conversation. Now, this may sound boring, but it is utterly captivating. The conversations between Celine (Delpy), and Jesse (Hawke) are the story. It’s not the type of movie where dialogue is just filling in gaps in the action, it is the action.

With so much resting on the shoulders of these two actors, and these conversations, it’s a good thing both are stellar. This movie would have been an utter disaster were it not for the audience’s desire to lean in and listen. You almost feel like a fly on the wall, watching these two strangers get to know each other. The conversations grow naturally, from the casual, to the very personal, and even philosophical. It’s a steady progression, the way getting to know someone actually goes. Granted, in real life, it usually takes place over more than one day.

I stumbled upon a video about the strength of the conversations in the Before trilogy, and I’d like to share it with you now. The creator of said video is far more eloquent than myself. Now, if you haven’t seen the trilogy, this will contain spoilers (in fact, I found out some things about the sequels, but that’s okay).

Another plus about this film is that Vienna, Austria is presented as a real place. In so many movies set in Europe, the scenery is filmed in such a way, it looks like a tourism ad. Woody Allen’s Midnight in Paris, for example, presents that city as some sort of technicolor Utopian religious experience. Many filmmakers have given New York and Los Angeles similar treatment.

Before Sunrise, however, just happens to take place in Vienna. That fact makes little difference, and it could just as easily be Tokyo, or Chicago. Yes, there is some appreciation shown for local scenery, churches, and such, but overall, the locale is not romanticized. This is just where the characters ended up together, not some magical place where everything is perfect.

Between the settings, the conversations, and the concept, this movie doesn’t scream, “I was made in 1995!” It could have taken place at any time, and it would be just as effective, and not much would have to be changed. Well, other than the clothes. The wardrobe is definitely straight out of the mid-1990s.

Throughout the film, Celine (Delpy) wears an oversized plaid flannel shirt as a jacket, over a slip dress. It doesn’t get more 1995 than that. Trust me, I know, since that is exactly what I wore back then. In case you aren’t familiar, a slip dress is basically a sundress, but awkwardly low cut in the back, with super skinny straps that are usually too long. Oh, and you wear it over a thick, basic t-shirt. Most of us wore them with boots, clogs, or Chuck Taylor All-Stars. I hear those of you under 35 laughing, but this was really a thing. And we loved it! Jesse is a bit dated in appearance, too, as Hawke is rocking his Reality Bites-era hairstyle. We can give him a pass, though.

Before Sunrise takes place in just one day, yet it still feels like a journey. Jesse and Celine have a technically uneventful, yet somehow life-changing day. There are no dramatic, life-endangering events. No explosions, or dramatic music. This movie plays out in much the way life does. We have talks that are often meaningful only in hindsight. We see and do ordinary things that become treasured memories.

When we meet someone, we really have no idea what they’re going to mean to us. Sometimes, that is revealed in a single day, and sometimes… 25 years is about right.

Thank you for reading! What are your thoughts on Before Sunrise? Comment down below!

What made me sit down and watch this movie was also its title. I just got a feeling that this might be a feel good movie, and it was! Yet to watch the other two, but this post pretty much sums up everything I felt. I might try out that dressing style someday as well 😁. Nice read !

I’ve seen the first two. Did I admire it? Yes. Do I want to see it again? No. It’s very well done, very realistic. But–rather like “My Dinner with Andre”–I need a little more movement in my “movies” (that was a joke…sort of). As for the comment about “Midnight in Paris,” Woody was very clear that both it and “To Rome with Love” were meant to be dreamy, fun-filled homages to both cities. That being said, with all their worts, both are miraculous in their way.

I’ve seen comparisons to My Dinner With Andre a lot. I should see that one. Wallace Shawn would be a nice bonus.