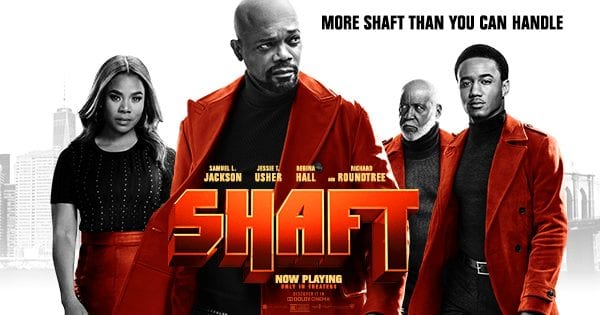 Over the years, I’ve only gained more appreciation for the original blaxploitation classic known as Shaft. Not just for its cultural significance, but for its gritty seventies style, slick dialogue, and fascinating characters. There’s also no denying the coolness of Richard Roundtree.

The John Singleton reboot, also annoyingly titled Shaft, starring Samuel L. Jackson was nowhere near as memorable as the original, but certainly had its charms. If you’re going to replace Richard Roundtree, Jackson is your best option — and for good measure, they had Roundtree appearing briefly in the film as well.

Now it’s 2019 and now we are getting another reboot. I’m not sure who asked for it, but I welcomed it. The trailer had a few genuine laughs. It seemed to parody the blaxploitation machismo against the social justice warrior culture. In the hands of a smart comedic writer, you can really have yourself something here. Plus both Jackson and Roundtree still look so damn cool. Though my excitement quickly faded when I saw the movie…

Written By: Kenya Barris, Alex Barnow, and Ernest Tidyman (based upon the character of John Shaft from the novel by)

John “JJ” Shaft III (Jessie T. Usher) is the son of the legendary private detective, John Shaft II (Samuel Jackson), who is the descendant of one of the coolest brothers that ever roamed Harlem, the original John Shaft (Richard Roundtree).

Unlike his predecessors, however, JJ does not uphold the same hedonistic lifestyle. JJ is a socially-conscious, polite and gentle data analyst working for the FBI. His good manners are certainly due to the strict but fair parentage of his mother Maya (Regina Hall). His computer skills make an enviable asset for the bureau but despite his hard work, he receives no respect from his supervisor, Agent Vietti (Titus Welliver).

But when his childhood friend, Karim (Avan Jogia), a recovering drug addict, is found dead via drug overdose, JJ suspects foul play. The investigation leads him to the heart of Harlem, and when he comes to a dead end, he feels that he has no choice but to enlist the help of his father.

Look, I’ll be honest, I get quite the kick out of hearing Samuel L. Jackson screaming obscenities. Jackson’s cinematic presence, freedom of expletives and perfect comedic timing can make any mediocre film more enjoyable than they should be — such as The Hitman’s Bodyguard. Thank goodness this film was R-rated because it would have been unbearable otherwise.

So I won’t lie and say that this film never made me smile. Almost nobody can swear as wonderfully as Samuel L. Jackson, besides perhaps the late great Denis Farina.

The film lives and breathes on Jackson’s talent. Despite Usher’s decent contribution, he’s no Samuel L. Jackson and you find yourself missing him whenever he’s off-screen. Most of the humor, unfortunately, falls flat, but the comical moments that do work — mostly in little moments — come from Jackson’s performance. Still got it, the original John Shaft (Richard Roundtree). Image via WBUR

Richard Roundtree makes a brief but welcomed late appearance in the film. Despite his age, he’s still got it (even though it’s quite obvious that they are using a stunt double in the action scenes). There is a great Raiders of the Lost Ark inspired gag in the film involving Richard Roundtree, which is probably the funniest scene of the whole film.

There’s nothing sad about his appearance; it doesn’t feel like some old star desperately trying to regain some past glory. He’s still old-school Shaft, just a lot older. He’s still a badass, still as cool as he was forty years ago. It’s unfortunate that his appearance is quite short as the trailer makes you believe he was more involved in the plot; he only appears in the last twenty minutes.

Why is This Called ‘Shaft’?

I can’t stand this stupid trend of giving the reboots the same name as the original. Why is this movie called Shaft? It makes everything needlessly confusing. Similar to the Halloween franchise, there are now three films in the Shaft series with the same name. There’s the original Shaft, the 2000 remake Shaft and now the remake/reboot Shaft. Why couldn’t they just call this film Shafts, or something else? Maybe something a little more imaginative.

The biggest issue with this remake/reboot is that it doesn’t even come close to capturing the spirit of the original Shaft. The John Singleton entry wasn’t perfect either, but it did have grit; it didn’t feel watered down. The cinematography in this film is colorful and slick. There’s no attempt made to emulate the seventies style and feel; it’s only interested in making a half-assed action-comedy, which is never what the original Shaft was about.

Even with its imperfections, the late, great John Singleton obviously had a love for the blaxploitation classic. Even with the name of ‘Shaft’ attached, there’s nothing to indicate that Tim Story was interested in being faithful to the spirit of the franchise.

So Many Wasted Talents

The film has an abundance of talent that is completely wasted in superfluous roles. First, there’s Titus Welliver as FBI boss Vietti who is completely unnecessary for the part — he should have been in my beloved Deadwood movie instead.

Regina Hall does instigate a few laughs as Maya, mother of JJ and past flame of John Shaft II, and she clearly does her best, but she deserves better. The same goes for Luna Lauren Velez, whose main objective is being the butt of an outdated joke about not hitting a woman.

Most frustratingly, there’s the great French, performer Isaach de Bankolé, who becomes the main antagonist of the film, despite hardly appearing in the film. If you’re familiar with his work, you know Bankolé is extremely talented and deserves better than throwaway roles like this or whatever he was doing in Black Panther. 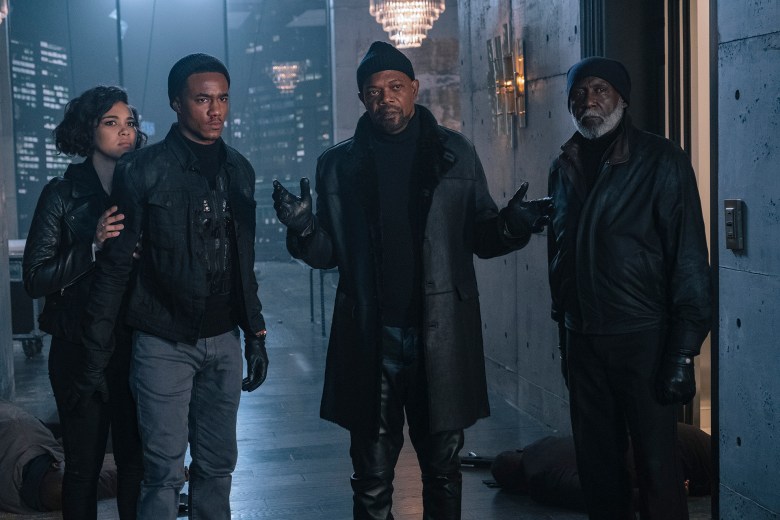 The seventies were a different time. Many things would outright shock the current millennial. The conflicting sexual politics between the two eras could have been an ideal subject for satire. Shaft does try to tackle the cultural differences but it doesn’t have the intelligence to really go through with it. It doesn’t go further than Jackson being an unrepentant womanizer and Shaft Jr. being too sensitive.

We receive a few pointed references about modern gender and racial politics. But it feels like paying lip service, and nothing transgressive is being said. Despite the modern references, the film feels strangely dated with its gender politics. There’s even the typical love interest, Sasha (played terribly by Alexandra Shipp), who isn’t so much of a character than a plot point for the main character.

The film didn’t need to be progressive, but considering the characters, and the culture clashes that are hinted at, there was material ripe for some poignant, madcap satire. The film never goes there and opts for cheap jokes instead.

If you love hearing Samuel L. Jackson mindlessly swear, then you’ll find some enjoyment here. If you want to see Richard Roundtree as Shaft again, watch the last twenty minutes. Other than that, this film has no interest in honoring the blaxploitation classic. Instead, it just wants to be a safe, dumb, action-comedy — and not even a very good one.

It’s certainly a masterpiece compared to Murder Mystery, which has mentally scarred me, but this could have been something better. It should have made smart jabs at the outdated sexual politics of the original while also honoring its cultural legacy. A smarter writer and director, who actually loved the original, could have done something special. Perhaps in another world.

Even worse, It will probably be the last time we will see Richard Roundtree as Shaft…

Thanks for reading!  What are your thoughts on Shaft?  Comment down below!