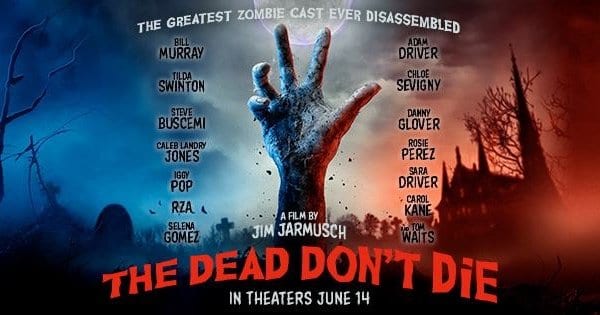 On April 1st, 2019 the first trailer for The Dead Don’t Die arrived with an outstanding cast highlighting a zombie comedy from Jim Jarmusch, the director of Coffee and Cigarettes, and Broken Flowers.

I could have sworn it was an April Fool’s joke. No way was this cast all together in a zombie comedy, that looked this insane. No way could this be an actual feature-length film. I was convinced it wasn’t real.

Then trailer number two came out and it seemed like this movie was really happening, and after finally being able to sit down and watch the feature-length zombie comedy starring Bill Murray and Adam Driver… I wish this film would have stayed an April Fool’s Day joke.

Due to polar fracking, the Earth is off its orbit, causing a global catastrophe. Sunrise and Sunset are out of whack, and the dead are rising from their graves.

After figuring out that something isn’t right in their small town, Chief Robertson (Murray) and Officer Peterson (Driver) are tasked with warning the citizens of Centerville of the impending zombie apocalypse.

If you are a Jim Jarmusch fan it seems you will be right at home watching The Dead Don’t Die. Jarmusch has a style that is more based on character development and moods over narrative structure. That style profile is apparent as I was watching The Dead Don’t Die. This film doesn’t have a narrative that I could find or at least be willing to follow. Even the breaking of the fourth wall, that happens from time to time, took me out of whatever narrative carrot I was trying to follow.

Still, it’s hard to believe that The Dead Don’t Die doesn’t offer anything other than a collaboration of a lot of talented people on screen with nothing really for them to do. They are all just there, talking at each other without really saying anything. Though I am generally unfamiliar with Jarmusch’s filmography, I am not curious about looking up any more of his films to add to my viewing library.

If you are excited for the new Jarmusch film, then you don’t need to read ahead. This is not the review you are looking for.

The Dead Don’t Die contains the typical zombie film themes such as consumerism, technology addiction, and even what appears to be the film theme of Summer 2019: climate change. There is a way to have an important message wrapped up in a comedy, even a zombie comedy. How, you ask? Make your characters likable. If no one cares about your characters, then no one is going to care about your message.

If The Dead Don’t Die was at least fun to watch then the message attached could hit home harder and actually make people think. Instead we are stuck with a “zombie comedy” with dull characters who awkwardly try and communicate with each other without saying anything. Which is, I’m sure, supposed to be a commentary on our social awkwardness due to the rise of technology.

By the time any message is presented everything ends up feeling preachy and cringe-worthy as opposed if we would have gotten there organically.

We’ve all seen films break the fourth wall or acknowledge the real world outside of the film countless times.

Positive examples: Ferris Bueller or George Kuffs talking to the audience throughout the film. Classic. Everyone pulling out the script in Robin Hood: Men in Tights to see that Robin Hood gets another shot in the archery contest. Classic.

Negative examples: The Dead Don’t Die. The fourth wall should not be used as a plot device to be brought out only when you need it to finish your movie.

If you want to break the fourth wall, you must set up your audience for this possibility. With a parody, the audience is prepared for this sort of wacky moment. With The Dead Don’t Die, the film hints to the real world at moments throughout to make you wonder what they are going for. Then suddenly, they dive so deep into the fourth wall that it makes everything feel cheap and that you wasted your time with this film.

Image via The Observer

There is an amazing cast of talent on display throughout The Dead Don’t Die. Seeing the talent this film offered is the main reason I thought this was an April Fool’s Day joke. There is no way that many people would be put together for a “zombie comedy”.

Realizing that everyone in this film has worked with Jarmusch before, sometimes multiple times, made the casting make a little more sense. Everyone had his style down and knew exactly what the director was looking from scene to scene. The tone in each performance across the board was spot on for the world created within The Dead Don’t Die. The actors were able to make even the flattest of stereotypical characters watchable at the very least.

Watching recognizable stars makes this movie much more palatable. The credibility of the cast makes this film fun in spurts if only to see some more serious actors get a little quirky. Like Tilda Swinton as a Scottish, Buddhist, Samurai, funeral home director.  If unknown actors were cast in these identical roles, this film would be pulled off the stage by a vaudeville hook so fast.

For me, The Dead Don’t Die was unexpectedly Dead on Arrival.

There will be some that adore the work of Jim Jarmusch, who are more prepared for what they are getting into, that will question every reviewer’s integrity. For those reading, I am glad enjoyment can be had with this film, especially because of the cast on display.

As a first time Jarmusch viewer, there was very little to enjoy in this film for me. The zombie side of this film is basic and brings nothing new to the table. From the comedy side of this film, you will see some of the gentlest comedy ever captured on film. A couple of chuckles. With the cast involved, and the promise of a “zombie comedy” I expected it to be hilarious and a good time. Instead, we got neither and just kind of a deep exhale as you check your watch during the final scene. Not what I expected going into this film.

The Dead Don’t Die is filled with quirky, monotone characters that speak with long silences between lines of dialogue. Nothing within the plot is fleshed out enough to create any sort of emotional attachment to the characters or what is happening to the town of Centerville. Basic zombie themes are then attached to give the film an appearance of deeper meaning, but without the attachment, The Dead Don’t Die is just another zombie film. Which is a shame because it could have been so much more.

Oh, and make sure to sever the head so it doesn’t come back. Thanks for reading!  What are your thoughts on The Dead Don’t Die?  Comment down below!

This is pretty much exactly how I felt directly after watching it in Cannes, so I’m glad I’m not the only one feeling underwhelmed!

Dang it. I was looking forward to this one.

I’m reading a lot of negative reviews of this movie, and I am among the excited ones, I usually enjoy Jim Jarmusch’s style! I must see this one…