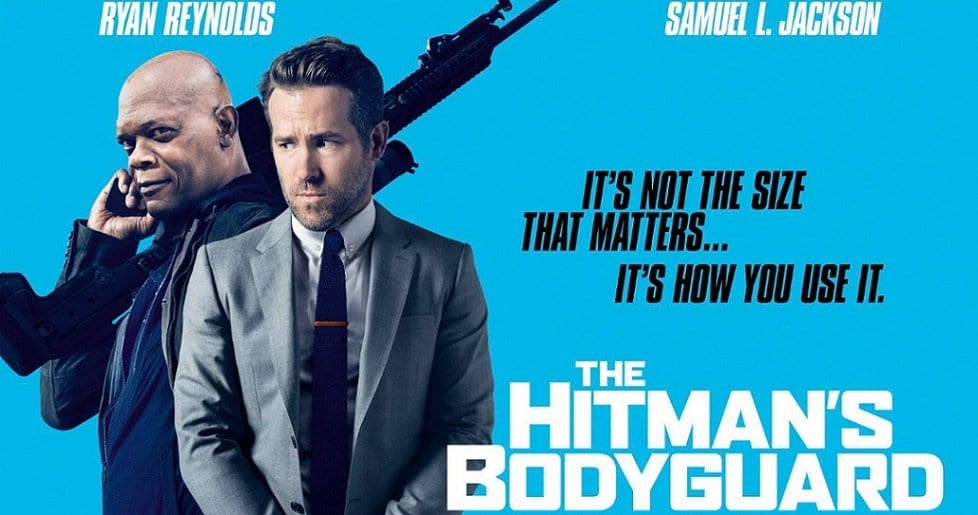 In a year that is void of solid comedies, The Hitman’s Bodyguard looks to break the mold.  Led by Ryan Reynolds and Samuel L. Jackson playing heightened versions of themselves, the film harkens back to buddy action flicks from the 90’s.  But does the film have some enjoyment or is it destined to be forgotten like the last third of this summer movie season?  The following review will be spoiler free.

The Hitman’s Bodyguard is directed by Patrick Hughes and stars the aforementioned Ryan Reynolds and Samuel L. Jackson with Gary Oldman and Salma Hayek in supporting roles.

Michael Bryce (Reynolds) is a bodyguard that’s a little down on his luck.  After failing to save one of his clients, he’s relegated to protecting some really scummy people.  However, during the trial of a dictator (Oldman), a dangerous hitman by the name of Darius Kincaid (Jackson) is the only who could provide a worthy testimony.  When plans to assassinate Kincaid during his initial transport to the courthouse go awry, it leaves Bryce to have to usher Kincaid to safety.  This won’t be easy, however, as they pretty much hate each other’s guts.

In 2011, the initial script for The Hitman’s Bodyguard was on the Black List, signaling that the script was one of the best unproduced screenplays that was is circulation at the time.  The script was then purchased by Skydance’s David Ellison where it would wait to find a distribution company and creative team.

After it was announced that Lionsgate would release the film in the United States, the script for the film underwent a frantic rewrite to make it into a action-comedy.  Initially, writer Tom O’Connor planned for the film to be a hard-hitting drama, meaning that the film would change the core of the story right before filming.  Writers only had two weeks to change the script before the camera started rolling.

With varying results, it seems as if more and more scripts on the Black List get tampered with before they hit production.

As for the movie itself, there are some aspects that many people might enjoy.  Ryan Reynolds and Samuel L. Jackson are clearly having fun in their roles, acting as heightened versions of themselves.  There’s some solid snarky remarks by Reynolds and loud “motherf******s” from Jackson that allow for some funny moments between the two.

Some of the action even holds its own.  One set-piece that sticks out is a crafty little fight between Reynolds and an anonymous Eastern European henchman where Reynolds has to use a ton of surrounding elements in order to fend off the assailant.  In doing the bare minimum to be enjoyed, The Hitman’s Bodyguard succeeds.

Most people who go to see this film in theaters will expect nothing more than the occasional snarky retort followed by an expletive-laden tirade that gets disruptive by an explosion.  Those people will walk away feeling entertained by what The Hitman’s Bodyguard has to offer.

This movie isn’t a dumpster fire, but it’s difficult to call it a good movie, however.  It plays off of so many genre cliches that we’ve seen countless times before.  You’ve seen this film before.  There’s even a ticking clock that comes down to the final seconds in the film’s climax.  Don’t expect any surprises.

The groundwork for a moderately entertaining action-comedy is in this film.  If that’s all you need out of a movie, then you’ll feel as if you spent your money properly.

The Score and Technical Aspects of a Film Really Do Matter

As for this critic, there were way to many mechanical issues with the film to give it a “fresh” grade.  Other than the obvious instances of shaky cams and blood splatter on the camera during fight scenes, there are choices made that really detract from the film.

I normally don’t like speaking in hyperbole since we as humans can be prisoners of the moment, but The Hitman’s Bodyguard has the worst music and score in any movie of 2017.  The score has sounds that range from a twangy guitar to an eardrum bursting scream-o track that will have audience members grimacing in displeasure.  On occasion, the music even has chants that are akin to something you’d hear in a 90’s hip-hop song.  The score is all over the place and drastically changes the tone of the film, making you wonder how exactly you should feel in each moment.

If that wasn’t bad enough, The Hitman’s Bodyguard even uses knock-off covers of popular-ish songs (Ram Jam’s “Black Betty” as an example) that are almost tortuous.  For a movie such as this one where the focus is on the two lead characters, the best complement that you should have given the score is that you hardly even noticed it. Not to mention there’s pretty terrible editing on display here that saps the energy out of most jokes.  There’s an extra beat inbetween jokes that makes them feel awkward or out of place.  Snappy dialogue needs to have some type of rhythm or else each joke will fall flat.  The creative team is lucky that Reynolds and Jackson are so likable, or else this movie would have been a pretty serious misfire.

To make matters even worse, The Hitman’s Bodyguard fails to use Gary Oldman in a suitable manner to highlight the man’s abilities.  This man is one of the best actors working today.  He’s a chameleon that is always challenging himself with new roles.

Why on earth would you relegate him to a motive-less bad guy who does nothing but stare menacingly?  Do better people!  This man is a treasure.  Treat him as such.

Somewhere beneath the mess that is The Hitman’s Bodyguard is a good film to enjoy.  There are glimmers of what this movie could have been.  Unfortunately, they are ultimately bogged down by less than capable work behind the camera.  The result is a film that may be enjoyed by some, but one can’t quite help but think of what truly could have been.  It gets a D+.

If you want to see Ryan Reynolds be snarky, just watch Deadpool for the 100th time.  You’ll get way more enjoyment out of it.

Thanks for reading!  What are your thoughts on The Hitman’s Bodyguard?  Comment down below!

Join MovieBabble on Patreon so that new content is always possible.

You thought correctly there bud

I was wondering if you had reviewed this or not. I’m sorry you didn’t enjoy it. I absolutely loved it and thought it was hilarious. But everybody is different.
Good post though! I always enjoy reading your reviews.

I could definitely see where you would like it! A difference if opinion is never a bad thing.

For several years, I lived in a town, which didn’t have a movie theater. It was more about performance theater… So, I would have to travel to a different city to go and see a movie. I was also lucky to have a wide network of friends, who would share their movie collections. I stopped going to the movies. It wasn’t really an experience, either.

However, recently, I realized I’ve missed going to the movies. So every now and then, I wrestle with myself, weighing the pros and cons. When I go, I realize that the popcorn I once liked is too salty, that the screening rooms are too cold for a person dressed for 90 degree weather, and that the movies are … mostly meh, and I could have waited to see it in the comfort of my own home. With my own snacks, with my AC set for my liking. With the ability to pause it whenever I want. With the lack of people commenting the movie out loud, txting (mobile light), etc.

But, I believe a cinema itch to be coming this weekend. And this movie has been on my radar as having the least potential to disappoint my expectations and to waste my time. We shall see if I end up scratching that itch, and if so, will it put me off for a while.

(Sorry for mostly off-topic, but I felt like sharing.)

Not to worry! I loved hearing your thoughts! If it were up to me, I would suggest you see something else such as Wind River rather than this one.

Welp, you have successfully changed my mind. I am intrigued! Will let you know how it went this weekend :)

Glad I could help!!

I will admit that the trailers made this movie look like a Nick Fury/ Deadpool buddy cop film and I was fairly excited for that, being an avid comic fan. Your reviews tend to be spot on though, and for that I might just wait until it comes out on Blu-Ray and rent it. Thanks for saving me some money on a movie ticket! hahaha

Lol I’m glad I could help you out! I had similar thoughts to you and was hoping for the best. Clearly, that was not the case.

Hmm, that’s a real shame. I had been looking forward to this one, but so far most reviews haven’t been too positive ? Will still check it out I guess, but am once again lowering my expectations for this one. Great post though ?

Thanks for your thoughts! I’d probably wait until HBO or streaming to see it. Like you, I had high hopes for this one considering the talent involved, but there’s really nothing new or inventive that warrants a trip to the theaters.