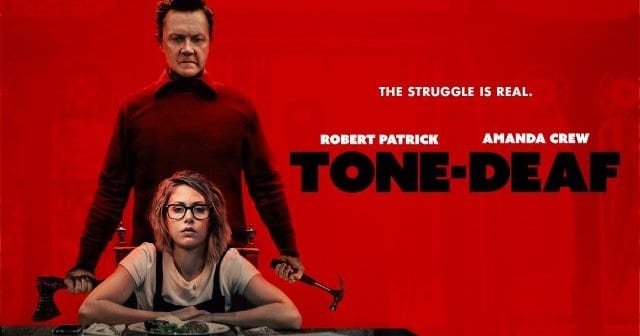 Seeing a noted character actor, someone known for a long list of memorable supporting roles, take on a lead role — especially if the role requires a certain amount of psychotic ham — is likely going to be very interesting (and certainly the highlight of the respective film).

Even though I knew absolutely nothing about Tone-Deaf, the poster had a menacing yet slightly goofy-looking Robert Patrick, wielding a tomahawk and a hammer, seemingly ready to engage in murderous mayhem. As a lifelong fan of Robert Patrick, ever since he scared the hell out of me as the liquid Cyborg, the T-2000, in Terminator 2: Judgment Day, it was a necessity that I see Tone-Deaf.

My initial hope was that it was going to be reminiscent to 2010’s The Perfect Host, the underrated black comic thriller starring an unhinged David Hyde Pierce (who doesn’t want to see Niles Crane go berserk?). At the very least I figured, Tone-Deaf was going to deliver a supremely entertaining Robert Patrick performance.

Lucky for me, however, while Patrick certainly stole the show, Tone-Deaf turns out to be a delirious little gem, becoming both a comic satire on generation gaps as well as being an effective (and sometimes particularly gory) horror-thriller.

The life of spoiled millennial Olive (Amanda Crew) is not going as planned. Having recently discovered that her boyfriend, York (Nelson Franklin) has fallen for a younger, possibly even more immature woman, she has now been fired by her sexist boss, Asher (Ray Santiago) after rightfully calling him on his boorish behavior.

Meanwhile, Olive’s mother, Crystal, lives in a commune, gorging in psychedelics and casual hook-ups with douchey, young hippies such as the horrifically named Uriah (Johnny Pemberton). Following her mother’s advice, Olive decides to rent a home in the country, away from her hedonistic L.A. life and to hopefully find some peace within herself — as she is still, even after all those years, reeling about the suicide of her father, Michael (Ray Wise).

Unfortunately for Olive, the person she rents the house to, Harvey (Robert Patrick), has murder on his mind. Possibly being aware that he’s declining mentally — and suffering frightful dreams all the meanwhile — he decides to act upon one desire he’s always left neglected: murder. Just like Olive, he’s reeling from a suicide — in this case, his wife’s.

But despite their great connection, Harvey has no plans to spare her life, as he has a personal vendetta against the entitled millennial and plans to exact brutal punishment. Though as Harvey follows Olive around, he becomes distracted by other interesting murder victims and soon enough, the bodies begin to pile up.

Due to his imposing appearance, Patrick has often been cast as an authoritative figure, on both sides of the law. Besides his obvious turn in Terminator 2: Judgment Day, fans will likely recognize him as the one who briefly replaced Mulder in X-Files as well as on being one of the leads in the David Mamet produced military serial, The Unit.

No matter how briefly, it’s always a joy seeing Robert Patrick on screen, whether in a cameo such as Wayne’s World, a corrupt cop in Copland or appearing in notable other TV series such as Sons of Anarchy, Big Love or True Blood.

My personal favorite role of his however has always been The Sopranos Season 2, as a family man and degenerate gambler Davey Scatino. Any semblance of the threatening presence he possessed in the world of Terminator was gone. Here he was a meek, pathetic, whimpering loser in the mercy of his habit and the mobsters he owes money too.

I’m happy to announce that his role in Tone-Deaf is a perfect vehicle to show his ability to diversify as an actor. As Harvey, he plays a seemingly friendly and unassuming man, who despite his years of honest, hard labor feels unfulfilled. Haunted by secret guilt for his possible culpability for his wife’s suicide, he also harbors a sadistic urge to dominate and murder someone — most notably the modern millennial, someone who seems to sneer at everything he represents.

At times we have Harvey suffering frightening delusions, mostly due to his late wife. There are surreal dream sequences indicating Harvey’s inner guilt and murderous desires. And before Harvey commences the slaughter, we have him regularly breaking the fourth wall, talking directly to the audience, to any potential millennial watching, to lecture the entitled viewer about the merits of hard work and the values in the new, progressively liberal zeitgeist.

Patrick manages to make Harvey both creepy, weirdly sympathetic, and, above all, hilarious.

Praise should be given to Amanda Crew too, as the film’s foul-mouthed, spunky heroine, Olive, who becomes the target of Harvey. In the hands of a lesser screenwriter, her character would solely be fueled by dramatic pathos, a final girl under the grips of a trauma. It would be well-acted but ultimately, despite the back story, a one-note character.

Olive, however, is a deliciously flawed heroine, a cocky millennial, with a sense of entitlement and hypocrisy, alongside a history of bad relationships and a tendency towards hedonism. We are introduced to her as a young child during a recital, looking into the audience, waiting for her parents to see her. When we are then revealed that her parents missed her recital due to her father’s suicide (played wonderfully by Twin Peaks alumnus Ray Wise). The result is that Olive naturally becomes a little screwed up as time goes on.

As she progresses into adulthood, she finds herself in a state of arrested development, not committing herself in romantic relationships — usually due to her penchant for childish men, engaging in hedonistic behavior or by wallowing in a sense of grandeur regarding the possibility of her being some secret piano prodigy. Which she definitely isn’t.

All of this is wonderfully shown through Amanda Crew’s excellent comic timing and this sense of sadness pervading her being (which is mostly hidden through her wonderfully snarky attitude).

Besides the two main characters, the film features plentiful memorable supporting roles, most notably Oliver’s hippie mother, Crystal (Kim Delaney), her dead father (the only actor who could co-star in God’s Not Dead 2 and still retain his infinite coolness). The focus might mostly be on Harvey and Olive but these dysfunctional parental figures do get a moment to shine (especially Ray Wise in the film’s wonderful acid-dream sequence).

There is also some humorous support from Johnny Pemberton as Uriah, a douchey hippie who nobody likes, Nelson Franklin as York, the unfaithful ex-boyfriend, and Hayley Marie Norman as Olive’s coke-snorting best friend.

I’m not familiar with the cinematic works of Richard Bates Jr, though, in my research, I have seen some noteworthy accolades regarding his 2012’s directorial debut, Excision. In all that time, he has continued with a stream of idiosyncratic indie films, with Suburban Gothics and Trash Fire, each of them filled with dark humor, gore, and dramatic pathos.

Since I have only seen Tone-Deaf, I can only state that I’m instantly intrigued by his work and will certainly check out more. Throughout Tone-Deaf, I veered from riotous laughter, shock-and-awe, and even a slight discomfort with some of the creepy visuals. Granted it’s an acquired taste, but this is truly the work of a true author.

I had so much fun watching Tone-Deaf that any cynicism I regularly have about the state of modern cinema is gone. (Admittedly, whenever another Disney remake is announced, I’m instantly cynical again.)

But it’s nice to know that filmmakers like Richard Bates Jr. still have the ability, even with little exposure and having to deal with a lower budget, to make their vision come alive.

Tone-Deaf is a Gory Satire about the Current Cultural Divide 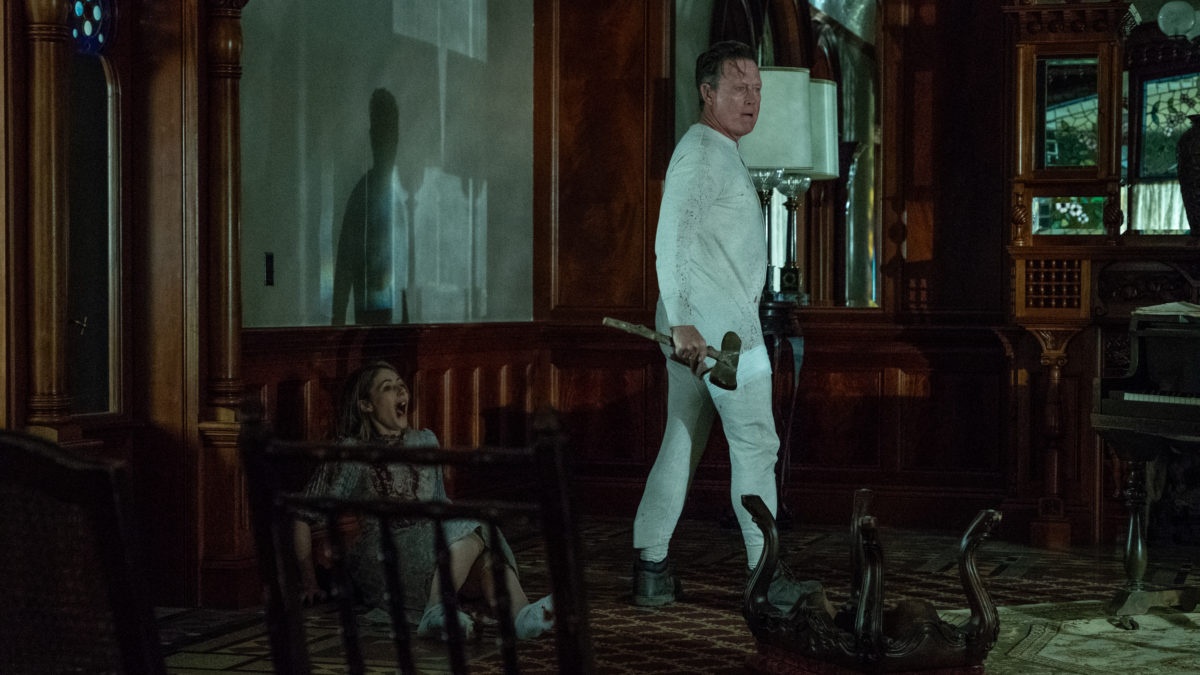 Admittedly even Robert Patrick does not look in long-johns. Image via The Harvard Crimson

As a satire, the film boasts many jabs against both baby-boomers and millennials. The clash of old-fashioned (and sometimes bigoted) values between the (sometimes self-righteous) political correctness of millennial is mocked in this film (though I would argue that the film has a bigger beef against baby-boomers, since Harvey, even with all his weirdly likable traits, is the film’s central villain).

The film’s central millennials are portrayed as entitled, hypocritical and self-righteous. The film’s central baby-boomer is portrayed as out of touch, morosely insensitive and nostalgic for a world that never existed — and I’m ignoring the whole part of him going on a killing spree. Both sides could learn from each other — especially since the main characters are connected to each other due to personal tragedy — but neither side is listening.

The film might not have anything groundbreaking to say, but it doesn’t need to.  It’s just a satirical portrayal of the current hopelessly divided American culture.

If you like twisted films or dark horror-comedies, if you can stomach gore and love Robert Patrick, you should see Tone-Deaf. If you’re also a fan of slightly more surreal films, you might get something out of this too, as Bates does give us a few interesting and strange visuals. Most notably, one features a red-clothed Robert Patrick surrounded by naked women drenched in blue paint).

If you’re like me, you thought last year’s Mandy was a masterpiece, then you will probably like (or at least) appreciate this film.

It’s not a guarantee you will like it — I recently discovered that most reviews were unfortunately lukewarm — but I adored it from beginning to end. It’s sometimes shocking (watch out for the surprising hotel sequence), sometimes hilarious. Perhaps I hoped for a more explosive, perhaps even daring climax. But even so, I had a bloody good time. 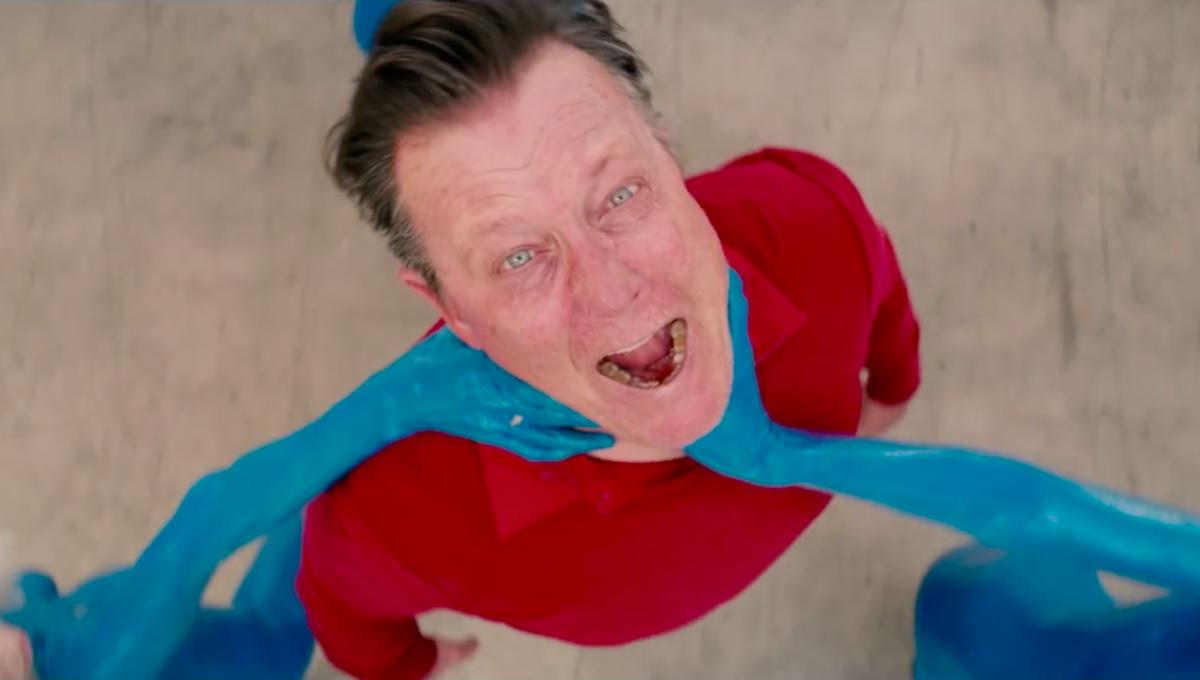 Thanks for reading! What are your thoughts on Tone-Deaf?  Comment down below!