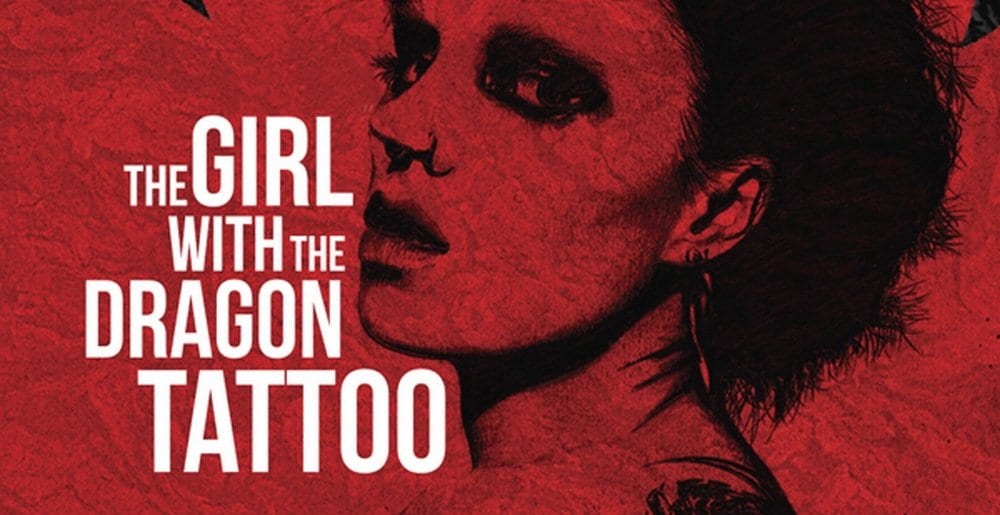 Readers had high expectations for the 2009 film adaptation of Steig Larson’s first novel from the crime series Millennium. Fortunately, lead actors Noomi Rapace and Michael Nyqvist gave Danish filmmaker Niels Arden Oplev a lot to work with. The film was an international success. The role of Lisbeth Salander exposed Rapace’s acting chops to the world, and her career has been on the rise ever since. In a truly unforgettable take on the crime genre, The Girl with the Dragon Tattoo is a is as shocking as it is thought-provoking due to its portrayal of violence against women, the struggles of integrity-driven journalists, and welfare programs in contemporary Swedish society. The following review will be spoiler free.

Following a crippling blow to his professional reputation and an impending prison sentence for libel, journalist Mikael Blomkvist (Nyqvist) is contacted by industrial tycoon Henrik Vanger to help investigate the 40-year-old disappearance of his favorite niece, Harriet. After a period of light stalking and hard drive monitoring, professional hacker Lisbeth Salander (Rapace) decodes a piece of the mystery and contacts Blomkvist through an anonymous, yet easily traceable, email. Her discovery and obvious technical skills prompt him to enlist her help. Together, the two of them investigate the troubled and convoluted past of the Vanger family to uncover the truth behind Harriet’s disappearance.

Note: The actors speak entirely in Swedish with English subtitles.

The Millenium Series was published after the Steig Larson’s untimely death in 2004. The Swedish title is “Man Som Hatar Kvinnor,” which translates to “Men Who Hate Women.” The title was changed to The Girl with the Dragon Tatoo in order to make it more palatable to foreign audiences. Niels Arden Oplev, who chose to direct only the first installment of the series, received international acclaim for his adaptation for The Girl with the Dragon Tattoo.

Journalists have suggested that the events and people in The Girl with the Dragon Tattoo were inspired by actual events in Larson’s life, specifically the grueling violence against Lisbeth Salander. In an interview with The Independent, Noomi Rapace described the role as being particularly treacherous, saying it turned her into “a complete nutcase”. She managed to channel her mental anguish into a gritty and raw performance. 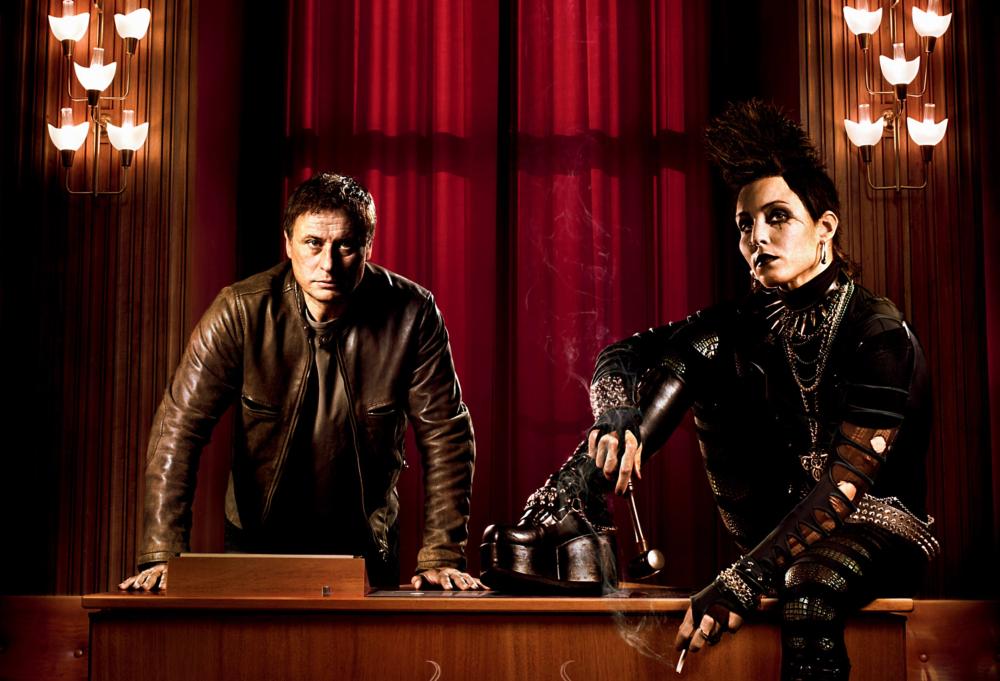 Lisbeth Salander is an Unusual Heroine

The characters in this story have a tendency to be either inherently good or alarmingly horrid. Lisbeth is the only true representation of moral ambiguity.

Lisbeth Salander is a complete enigma. It is clear she struggles with her decisions, thoughts, and feelings. Mysterious past events torment her at every turn. We are tossed only bits of info about her true motivations throughout the first film. What we are privy too is the incredible violence she encounters in the present day, and how she responds too it.

In the troubled character of Lisbeth, we are shown a woman of vast intelligence and power who lurks in the background, pulling strings like a marionette. Larson succeeded in creating a female character who is both powerful and powerless, but he gives her the tools to exact her revenge on her attackers. There are more than a few moments where you will say, “Ha! You got what you deserved!”

She alters the lives of malicious people by unearthing information they thought they could bury. She spends the entire film exposing the secrets of others while leaving hers intact until the precise moment of her choosing.

The Film Paints a Scary Picture of Sweden’s Guardianship Laws

In Sweden, if the state declares an adult unable to care for themselves, they can appoint a guardian to oversee their affairs. Our main character’s mental health history prompts the state to do just that.

The actions of her guardian expose cracks in the system.  Because of those issues, people can exploit vulnerable individuals at an alarming rate.  Salander is at his mercy, and he takes control of her finances in order to bend her to his will. Because of her history, he has the upper hand in the eyes of the law and repeatedly threatens to report her for being difficult.

Lisbeth takes action to rid herself of the impending threat of her guardian, but an employee of the state subjects her to serious exploitation. I must warn you, these scenes are extremely graphic and very disturbing.

image via This Island Rod

Because of the dark subject matter of The Girl with the Dragon Tattoo, the runtime seems laborious. Many of the worst stomach-turning scenes are in the first half of the film, and they are unremitting. By the time we arrive at the full-on investigation, the bombardment of disturbing imagery creates a feeling of exhaustion.

The actors speak entirely in Swedish, which means 153 minutes of subtitles. While I do not consider that a problem, it might be overwhelming for some trying to read the script while processing the dark nuances of the film. The plot is also complex and requires the viewer’s undivided attention. You might have to rewind the film several times to fully understand it.

The fact that this film is in a different language makes it seem more powerful in a way. Foreign viewers have to rely heavily on their body language to interpret the emotions of the characters. The acting in this film was superb, and they transcended all language barriers with their performances.

The Girl with the Dragon Tattoo is an immensely thoughtful and beautifully shot film. It feels dark and cold, just like the subject matter. The character of Lisbeth Salander challenges conventions of traditional female heroines, especially in the crime genre. Despite its long runtime, Niels Arden Oplev’s film adaptation is gripping from beginning to end.

When Hollywood decided to put out its own take on Larson’s novel in 2011, it elicited some angry responses, especially from director Niels Arden Oplev. In a 2010 interview, he criticized the recasting of Lisbeth Salander saying, “Noomi has captured this part and it should always be all her.”

Whatever your take may be on the 2011 version, one thing is indisputable: Noomi Rapace knocked it out of the park with her performance.  Many will remember it as her best work.

If you are impressed with Noomi Rapace’s performance in this film, definitely check out What Happened to Monday? on Netflix.

Thanks for reading!  What are your thoughts on The Girl with the Dragon Tattoo?  Comment down below!

What movie topic should we discuss next?  Whether it be old or new, the choice is up to you!

[…] Now we have another genre film festival staple: the claustrophobic isolation thriller with the Danish film, Cutterhead. The film follows Rie, a reporter visiting an underground tunnel boring machine to […]

Hello everyone. I just published a post “ Top 10 reason’s why to make a tattoo” Check it and comment your opinion about this post. Blog https://jftattoos.com Thanks a lot.

Hello. If you can check my recents post and share if you can because I need help right now with visitors and subscribers. Even a comment will make me happy. thanks a lot for your time. My blog https://jftattoos.com

This movie was AMAZING! It followed the book almost perfectly, which I loved! Everything about it was just amazing! And this review has reminded me that I need to finish the rest of the movies! lol.

Yes! This movie is fantastic. Stay tuned for upcoming reviews of the other two films!

P.S. Thank you for reading the review!

When this film first started I thought what the heck am I watching here? But I am glad I stuck with it. It certainly isn’t an easy movie to watch…but it’s incredibly powerful. And Noomi Rapace was terrific in this role ?

You are absolutely right- this movie isn’t easy to watch, but it is definitely worth putting the time in to watch and analyze such a profound film. Thank you for reading the review!

This is probably one of the thriller movie I won’t forget. I watched this 7 years sgo, I could still remember the story line. But this film portrays the psychological effect of events happened to a child when he/she grows up will be evident when she grows up. So probably that will fall under Nature or Nurture category? But speaking with the plot, I would give it an 8 out of 10. ?Thanks for sharing the review.

Thank you for reading! This movie is unforgettable. I hadn’t considered the nature vs nurture question for Salander, but that definitely applies here. Thanks for pointing that out!

You’re welcome. I’m looking forward for the next review. We love movies, varied ones, but I don’t watch too many horror movies, I’m okay with thrillers as long as the plot is good. ?

Honestly, How Did Forrest Gump Win An Oscar?