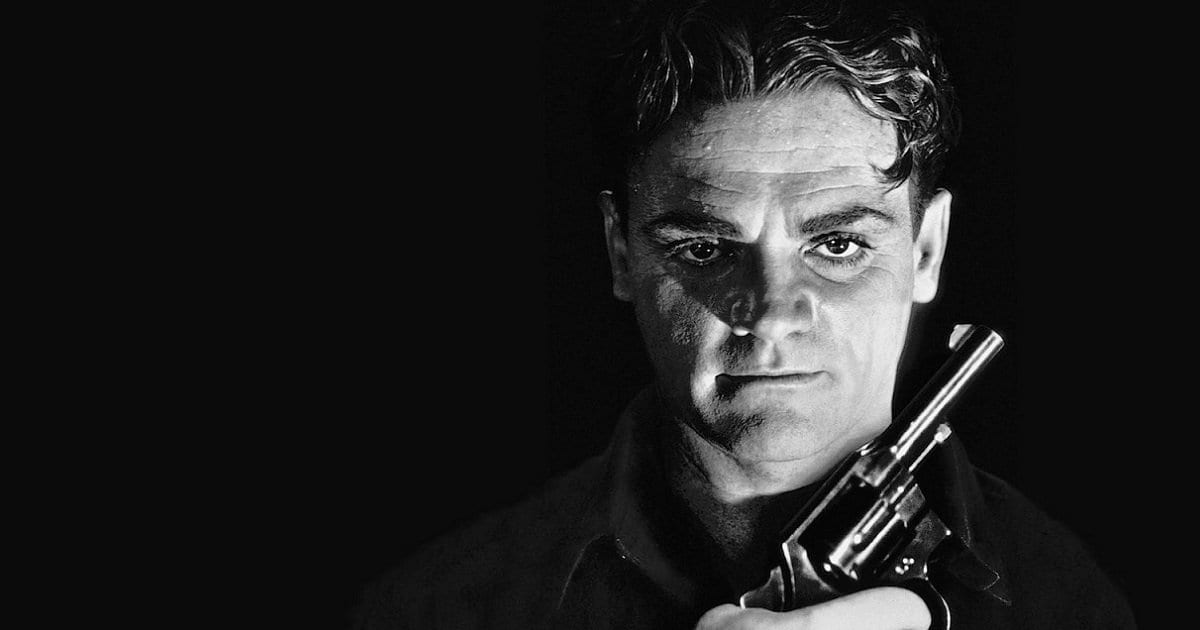 White Heat (1949) rolled out of Warner Bros at an interesting time for Hollywood and its genre circus. It came long after the heyday of the studios’ rise and fall of gangster pictures in the 1930s, in an uncertain Hollywood unsure of how to depict a post-war world. As a result, Director Raoul Walsh’s 1949 hit White Heat saw the traditional gangster film dipped in the shadowy, anxious ink of film noir.

The film starred the man synonymous with the once electric gangster genre: James Cagney. 1930s films like Public Enemy had made him a box office behemoth. However, an ill-fated decision to launch his own production company brought him back to Warner Bros with his tail between his legs. Since his time away, cinema had changed, the genre had changed, the world had changed. But boy could Cagney still act.

Cagney’s performance as Cody Jarrett is regarded as one of the greatest in crime movie history. After completing a lethal train heist, gang leader Jarrett escapes the chair by confessing to a petty hotel robbery. Frustrated, the authorities send the undercover Hank Fallon into jail to befriend and nail Jarrett. When Jarrett escapes, killing several prison guards in the process, Fallon is taken along for the ride, as Cody plans yet another high-risk, high-reward heist.

The breakneck pace of the movie’s story and set pieces are enough to crown it a classic. But what really stood out for me is the post-war subtext at its heart. The 1940s saw many films reflect the anxieties of the post-1945 period during a cycle later labeled as “Film Noir”. Yet White Heat is an example of Noir DNA sprinkled on unmistakable virtues of the classic gangster flick and its poster boy. 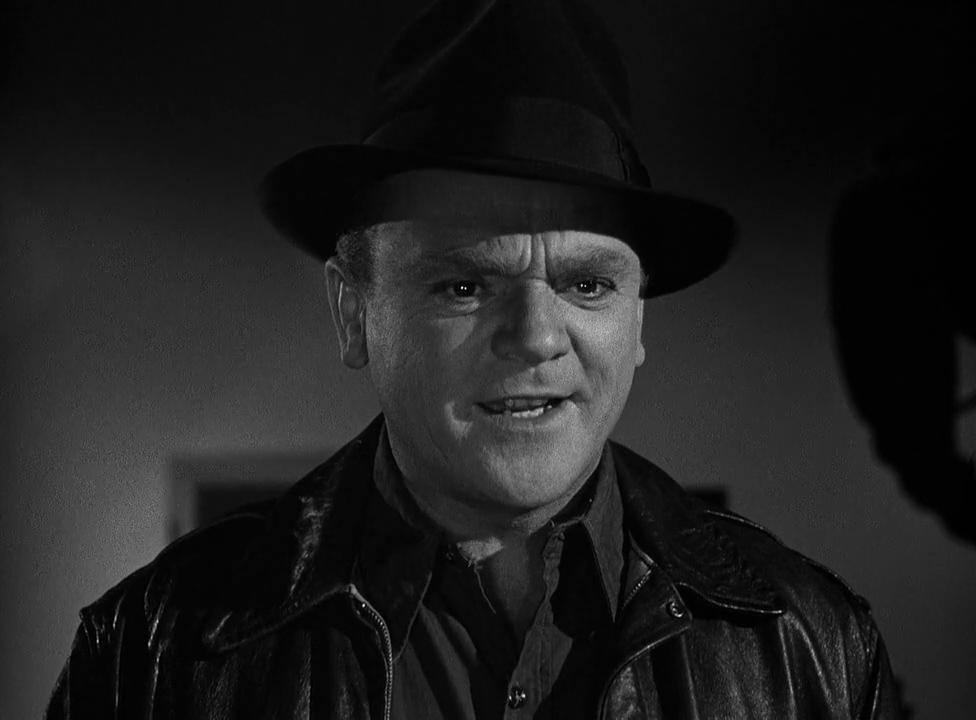 The antihero in gangster films long predates White Heat. Traditional gangster films’ killer protagonists had been made unthinkable by the implementation of the Hays Code. Yet White Heat works around this, using good-guy Hank Fallon — essentially a Noir-esque PI archetype — as the protagonist despite still heaping all the focus on Cagney’s Jarrett.

Jarrett is the character we feel for. The one the screenwriters spent the entire script trying to analyze, to understand. His crippling headaches and tragic attachment to his ill-fated mother, provide intriguing character backstory. This is all the more surprising considering Jarrett is an unbridled psychopath.

Jarrett kills at random with little regard for human life. His kill count reaches two in the opening scene. It’s difficult to detach this from the historical context of the time. His callousness serves in reaction to all-out global war, as well as the still incoming reports of mass genocide from Europe. Jarrett represented both psychotic murderers and young men for whom murder had been rationalized by the cold demands of recent times.

A standout scene comes when Jarrett finds out his mother has been killed. The message is passed down a line of prison inmates until it finally reaches a distraught Jarrett. Walsh chooses to reflect the stunning pain of hearing about the death of a loved one, far away, showing the pain of many men not involved with the proceedings.

At the narrative’s conclusion, Cody Jarrett is not captured. He exits the stage on his own terms in a blaze of guns and fire. It’s a stretch but the lack of justice for an evil villain echoed very recent history in 1949.

One of the movie’s most interesting subplots is regarding Verna, Jarrett’s wife. While he is in jail she takes up with his right-hand man “Big Ed”. She serves as the femme fatale of the film, an untrustworthy female archetype that was commonplace in the 40s and 50s.

The femme fatale represents a shift in Hollywood characters to more morally questionable characters following the war. The beautiful women would often lie to, cheat and even kill men to get what they want. On the one hand, this finally gave female characters a much-needed bit of agency in American cinema. But it also reflected a particular crude anxiety that had resulted from WW2.

In White Heat, Verna turns on her lover while he’s away serving time. The most obvious parallel to war is of a wife who carries on an affair while her soldier husband is away fighting. I think a more realistic echo of post-war anxiety is the actual agency of the female character.

Films like White Heat saw women scheming and killing, like the men. Gone was the misogynistic cooing and crying that Hollywood had saddled female characters with for so long. This ability to decide their own future echoed the agency a temporary female workforce gained in the war years. As a result, the adulterous, vain depiction of Verna validated men’s fears regarding sneaky gender mobility.

In opposition, Jarrett’s caring mother reflects a safer, older generation of American women. One that while stern, values loyalty above all else. At the end of the movie, Verna is arrested as an accomplice, ending any such worries about social change.

White Heat is an early Cold War picture. The dust of WW2 was still settling but already there are signs of a new conflict emerging. The U.S. authorities, presumably members of the FBI, that are trying to catch Jarrett are on top form. Hank is essentially a spy, and a good one at that, infiltrating Jarrett’s inner circle.

He sets a tracking device on the car which the boys back at head office rampantly use to narrow down the final shootout location — a chemical plant. The fear of the bomb would have been both growing and ever-present in 1949. It was only 4 years earlier that U.S. nuclear material incinerated Hiroshima and Nagasaki. At the time this must have seemed like an imminently worrying future.

When the authorities catch up with Jarrett, one by one his gang members are picked off until only the king himself is left standing. Jarrett climbs on top of a giant gas tank. Interestingly enough the tank is globe-shaped. He laughs like a fanatical mad man with his finger on the big red button. Jarrett fires at the tank and it explodes in a furious cloud of smoke and white heat. 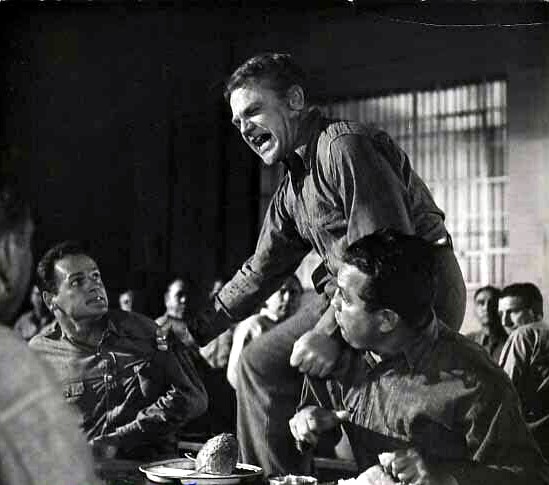 Most of that is a stretch. But a fun stretch. If we really try, most films can be placed within specific historical periods and explained as such. Admittedly, White Heat does lend itself to the process quite well. Yet, it can certainly be enjoyed simply as a classic crime caper. The chase scenes, numerous heist sequences, love triangle, and pop psychology make it an intriguing picture. Throw in the quite astounding performance of the great James Cagney, and White Heat earns its place as one of the greatest gangster flicks ever put to celluloid.

Thank you for reading! What are your thoughts on White Heat? Comment down below!