The Madness of Crispin Glover Cannot Save ‘Lucky Day’ 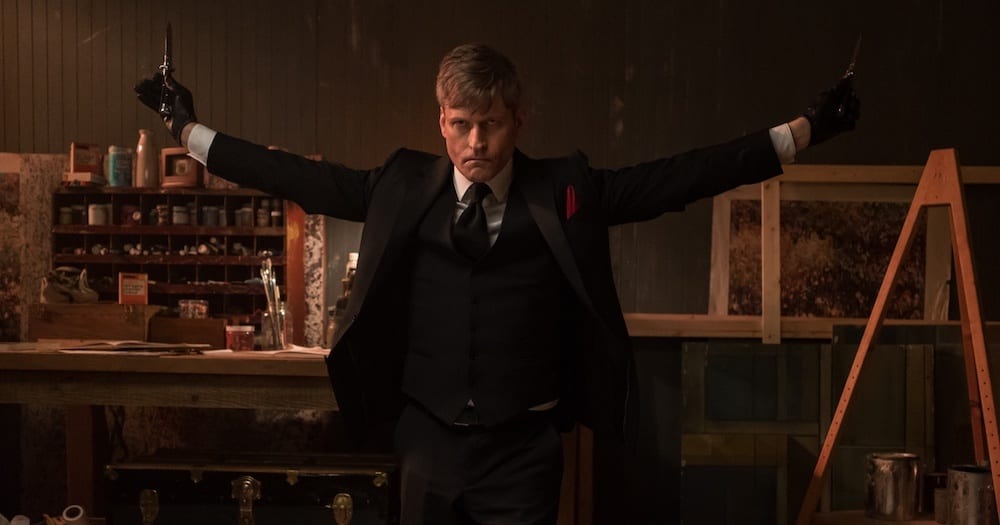 Here’s the premise: a psychotic hitman goes on an ultra-violent odyssey to avenge his brother’s death. Does this sound intriguing to you? Not really? Well, that’s because I forgot to mention that this hitman is played by none other than Crispin Glover! I see I’ve got your attention now.

Crispin Glover has always been a unique character both on-screen and in real life. He hasn’t had many leading roles in his career but he’s always been memorable.

His most famous role as George McFly in Back to the Future is undoubtedly the most lovable Peeping Tom in all of history. He’s also been as one of Jason’s goofiest murder victims in the Friday the 13th sequel (the fourth one — the one that was supposed to be “the final chapter”). He’s been one of the tweaking teenagers guilty of accessory to murder in River’s Edge. He’s also worked with numerous auteurs such as Jim Jarmusch and David Lynch as well as starred alongside the late great R. Lee Ermey in the excellent horror remake of Willard.

He’s even been in numerous blockbusters. From the creepy ‘Thin Man’ in those godawful Charlie’s Angels movies and The Knave of Hearts in that godawful Alice in Wonderland adaptation. Okay, that doesn’t sound very impressive, but he’s usually been the highlight of any lackluster film.

Suffice it to say, he was the only one that drew me to the action-comedy Lucky Day. Granted, its director, Roger Avary, made me hopeful too. Avary’s greatest success came as the co-screenwriter of Pulp Fiction, but he’s directed a few noteworthy films himself. He’s directed one of the few good game adaptations with Silent Hill. He also directed the underrated Brett Easton Ellis adaptation, The Rules of Attraction.

The trailer, while nothing spectacular, did provide a few laughs. Especially with the notion that the hitman Glover portrays isn’t French but just “thinks” he’s French. Unfortunately, Glover’s presence was basically the only good thing about Lucky Day.

After two years in prison, Red (Luke Bracey) is finally being granted parole. Upon re-entering civilian life, he vows to put his criminal past behind. Although his temperamental parole officer, Ernesto (Clifton Collins Jr.) constantly hassles him, hoping to catch him with an illegal firearm or narcotic.

Red’s ambitions are genuine, however. All he wants is a quiet life with his wife, Chloe (Nina Dobrev) and his annoying French-speaking daughter, Beatrice (Ella Ryan Quinn). In his two years of absence, Chloe has been building on an art project, partly based on Red’s isolation from society. Unfortunately for Chloe, she has to deal with her sexually harassing financier, Derreck (David Hewlett).

Red is also not looking forward to joining Chloe at the gallery, as he can’t stand the wealthy snobs surveying the art gallery for potential purchases. He drags his criminal partner, Leroy (Clé Bennett) with him for support.

But Red hadn’t figured for Luc (Crispin Glover), a psychotic hitman, who after his brother’s death, suffers from a particular delusion that makes him think he’s French. For some reason, he blames Red for the death of his brother (who died in the robbery in which Red was arrested). And Luc has no problem killing anyone who stands in his way…

Even if you aren’t a fan of Glover like I am, it’s hard to deny that he steals the show in Lucky Day. While his character is ridiculous, Glover makes it work. On paper the character seems like a one-joke character: he’s psychotic and speaks with a French accent because he thinks he’s French. But Glover makes the most of it, delivering his dialogue with the most laughably stereotypical French accent one could imagine. The role seems almost tailor-made for him — it wouldn’t surprise me if Avary wrote this film with him in mind.

The character is also the most fun. Wherever he goes, violence ensues. He has no qualms with killing the innocent. When he’s confronted by the owner of a car he is just about to steal, he merely slices that man’s throat. When testing a sniper rifle, he targets the head of a hapless pedestrian but when he instead shoots the bottle the pedestrian is holding in hand to pieces, he simply muses “it pulls to the left.” When a crowd of people is in his way, he simply mows them down.

It’s unfortunate that the character is given both racist and homophobic dialogue. It’s as if the director was afraid people would root for the character and not for the boring heroes of the narrative. Truth be told, any time Glover is not on the screen, the film suffers. Only one particular foul-mouthed monologue by the ever-reliable Clifton Collins Jr (the second best thing of this film) about his character’s knowledge about art made me laugh.

A Relic of the Nineties (and Not in a Good Way)

Roger Avary deserves infinite respect for being one of the screenwriters of Pulp Fiction, a cinematic treasure that I’ve probably watched more times than any other movie (especially in my teenage years). Like Lucky Day, Pulp Fiction is profanity-laden, violent and filled with dark humor. The major difference is that Pulp Fiction is smart and hilarious while Lucky Day is dumb and (mostly) painfully unfunny.

Lucky Day seems like a relic of the nineties. The kind of film you see wannabee edge-lords making after the success of Pulp Fiction. It really tries hard with the shock humor and gory violence but it mostly falls flat.

The dialogue is especially bad. It just tries too hard. Don’t get me wrong, I love politically incorrect humor when used properly, but you have to do more than throw profanities and gore in my face. That’s now how you win over this viewer. I’m not that easy.

One particular character that provides most of the cringe is Derreck. Hewlett might be a decent actor, but in Lucky Day, his overacting is embarrassing. In one scene, he tries to make a move on Chloe by ripping off his shirt and nearly assaulting her. This scene is painfully long and you’re just aching for the cringe to end. I guess his pathetic nature is supposed to be funny, especially his cowardly manner in one particular action scene, but it’s mostly just annoying rough to watch.

Derreck also has a constant painted black mustache on his upper lip, which I guess is supposed to be “wacky” but it just feels desperate. Lucky Day has an obsession with wacky mustaches as Tomer Sisley has a Hitler Mustache for some reason — are you laughing yet?

Granted there are a few funny moments thanks to Glover. A few noteworthy scenes involving his character dealing with the excessive hydraulics of a newly stolen car, a bar shootout that ends with a headless corpse nearly breakdancing and an art gallery massacre — though most of the gore is unfortunately phony CGI — sneak through to entertain.

It’s not a good sign when you’re rooting for the antagonists. But this probably because the protagonists in the film are as dull as you can imagine. Both Bracey and Dobrev are beautiful to look at it, but in this particular film, they don’t have much of a presence — not enough to carry this film, anyhow.

This might not be their fault, as the script gives them little to do. Bracey just plays the nice guy from prison, though he lacks any roughness to give the character any authenticity, and Dobrev is just the beautiful, hard-working, misunderstood artist who loves her daughter and wants her man to go straight.

Avary really wanted you to like them but in turn, he wrote them in the most shallow manner possible. It just didn’t mix with the unhinged goofball antagonist played with gusto by Glover. Either make them equally as goofy or give them something to work with like some actual drama to make you care about the characters.

A film that features a splendidly deranged performance by Crispin Glover, Lucky Day lives and breathes on his manic presence. Whenever he’s off-screen, the film is either a dud or resembles a nineties Tarantino clone.

It features a few genuinely funny moments but not enough for me to recommend it. My suggestion is to watch all the Glover scenes separately on Youtube.

Thank you for reading! What are your thoughts on Lucky Day? Comment down below!