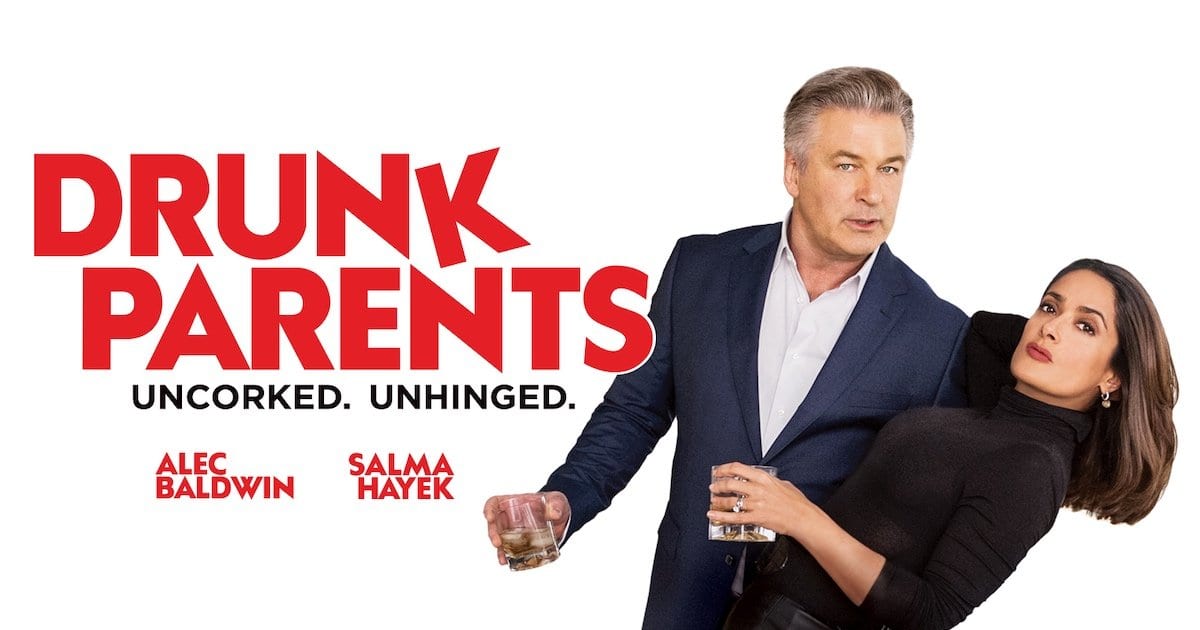 By now, you may have caught on to the fact that most of my reviews are of streaming service, and “pay-per-view” fare. I so rarely get out to the theater/cinema in person, this is the unfortunate role I’ve placed myself in. Drunk Parents was put out by DirecTV initially, but it now available to rent elsewhere (such as Amazon). While this movie is probably not on anyone’s “must-see” list, I was intrigued by the trailer.

Many of my initial assumptions about this movie turned out to be true — like it containing a lot of profanity — but there were some surprises, as well.

At the very start of Drunk Parents, Frank (Baldwin), and Nancy Teagarten (Hayek) are a well-to-do couple, taking their daughter (Veintimilla) to college. It soon becomes clear, however, that there are a lot of issues they’ve been hiding from their daughter, and social circle. Now, with their nest empty, the facade begins to crumble. As the title implies, the main characters consume alcohol in excess, in an attempt to stave off the feelings of impending doom. And because, you know, drunk or high = funny to many people.

Drunk Parents continues the trend of “bad behavior” movies, such as Bad Santa, Bad Teacher, Bad Moms, etc., as you may gather from watching the trailer below. The Teagartens go from one questionable decision to another, in an attempt to dig out of the hole in which they find themselves. Of course, these schemes only lead to more issues, chaos, and hijinks. This movie is almost written like a sitcom episode. A character on say, Full House, breaks a lamp, and goes to ridiculous lengths to hide it. The lesson at the end of the episode (complete with violin accompaniment) would be that you should tell someone right away, not try to cover it up. That’s basically this movie, but with a lot more adult language and situations.

I will warn you that the trailer contains what I’d say are mild spoilers.

Let’s start with some positives, because that’s the polite thing to do. The chemistry between Hayek and Baldwin is surprisingly strong. We actually buy them as a long-married couple, even though, on paper, the combination seems odd. For instance, Frank and Nancy speak Spanglish to each other, on occasion. Someone married to a Spanish-speaking person for that long would likely pick up at least a little, and I’m glad the writers included that. Another thing that makes them seem more realistic is that as much as they are still in love, they also tend to annoy each other. Virtually anyone who has lived with another human can attest to the authenticity of that.

Another bright spot is Jim Gaffigan’s performance as Carl. He almost seems like comic relief, even though this is already a comedic film. Gaffigan’s line delivery, facial expressions, and general physicality really take the quality up a notch. His is also given one of the more interesting character arcs in the film. Just when you think you have Carl pegged, there is a twist. It was a nice addition to the story, which made it much more watchable.

What Movie Is She In?

Don’t get me wrong, Michelle Veintimilla is charming as Frank and Nancy’s daughter, Rachel. The issue is, she sticks out like a sore thumb. It’s as if the character was written for a completely different movie, then dropped into this one. Rachel’s doe-eyed view of her parents is, I’m sure, somewhat deliberate, to indicate just how well they’ve sheltered her. However, it seems overstated. Veintimilla’s portrayal of Rachel would be more suited for a film like Terms of Endearment, than this one. I’m not sure if the performance was the issue, or if Rachel was written as a “Mary Sue.”

Literally the only image I could find of Rachel. — via Vertical

One Expected Guest, One Surprise

There are two cameo characters in this movie, who are called by the actors’ real first names. One of the appearances is somewhat foreshadowed, but the other is a complete shock. Let’s say this surprise person has been a big name in comedy for about 20 years. While this person is not my cup of tea, I think some viewers would be downright delighted to see them. The appearance of these guests runs the gamut from entertaining, to politically incorrect, to over-the-top ridiculous. The scene is largely responsible for where the story ends up, however, so it’s a needed one.

Getting back to the subject of schmaltz, something happens in the end of this movie that made me say, “oh, come on!” right out loud. I don’t want to spoil it for you, but if you’ve seen Angels in the Outfield, it’s about as over-the-top “happy” as that ending is. And of a similar theme. The ending wraps things up well enough, but it, like Rachel, seems out of place in this movie.

Drunk Parents almost feels like several screenplays, cut and pasted into a new document. There’s Hallmark Channel-style cheese, Jackass-style physical comedy, and a few relatable suburban life scenarios, glued together with enough profanity to make Quentin Tarantino blush. And boom, there’s your movie. It makes for a quite uneven experience.

There are some scenes where I actually thought I missed something, so I ran it back (this was a DirecTV rental, after all). No, there was, indeed, just enough missing information to make said scenes confusing. There’s even the repeated foreshadowing of a… let’s say physical condition, that proves completely fruitless. Why it was even added in, I have no idea. Perhaps just to make Frank and Nancy’s life seem all the more up-in-the-air. 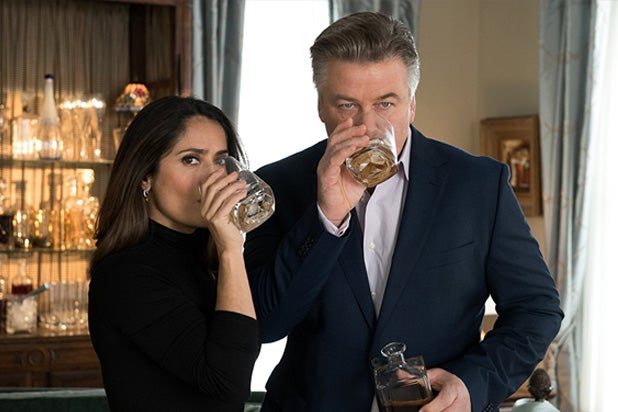 During his review of Second Act, our own Nick Kush posed the question of where to draw the line between watchable and good. At times, it is difficult to discern. This is not one of those times. While I wouldn’t say Drunk Parents makes my short list of worst films I’ve seen, it also doesn’t pass as a good one. There are some moments that are quite funny (usually courtesy of Gaffigan). Some are relatable, such as Nancy’s grocery store rant when she picks up a four dollar zucchini. There are moments that are even touching (though, those tend to veer into schmaltzy territory). Generally, though, it has to be said…

Who is the little girl Rose in the end? What did I miss?

I literally searched the movie transcript to figure this out! Rose is the daughter of the drug smuggling guy in the jail cell next to Salma Hayek mid movie.

The checking back thing is a blessing/curse with streaming. I did the same thing this morning on a different movie. “Hang on, did she know that?” spins back “No. No she did not”
I’d probably let stuff go if that wasn’t there.

The problem with many direct to tv movies is that their quality is sometimes… low. Not always, but there’s a selection bias at work! This doesn’t mean that all movies going to cinemas are good, of course.