‘Terminator: Dark Fate’ Proves that this Franchise Needs to Disappear 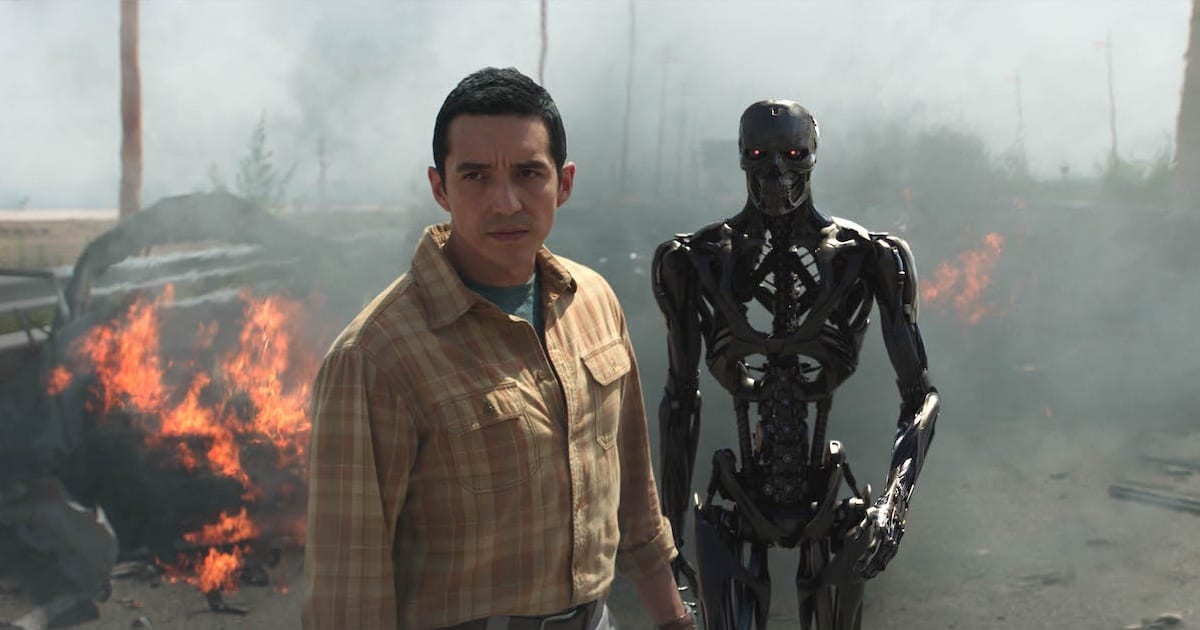 I’m one of the few people that ride for Terminator: Rise of the Machines. Maybe less so for the actual content of the film — I find it a solid if semi-disposable sequel with an awesomely nihilistic ending — but more so for the large amounts of vitriol against it. Is it as good as The Terminator or T2? Absolutely not! But as we know, few science fiction movies are.

At least it strongly continues the idea of fate that is at the center of every Terminator movie in one way or another, taking it to a logical conclusion by asserting that Skynet and, by proxy, Judgement Day was bound to happen eventually regardless of the good efforts made to stop it. It was unquestionably a bummer ending, but an appreciated exploration of determinism in film. Even with definitively bad moments such as Arnold Schwarzenegger saying “talk to the hand!” or Claire Danes yelling “just die you bitch!” to the T-X terminator played by Kristanna Loken, Rise of the Machines had something salient on its mind. I can’t say the same for Terminator: Dark Fate.

The Terminator property has been on life support for the better part of two decades with some of the more high-profile critical and financial flops in recent blockbuster history. Despite my lukewarm affection for Rise of the Machines, I can’t deny that it left many frustrated; Terminator: Salvation is most famous for Christian Bale’s famous “OH GOOD FOR YOU!!!” meltdown that I have used more times than I care to admit; whereas Terminator: Genisys has the title “Terminator: Genisys.” In the middle of all of this were a canceled TV show and many scrapped plans for new film trilogies.

As we’ve gotten further away from T2, each subsequent sequel, re-quel, reboot, soft reboot, or whatever other phrases you want to use has illustrated that, in its current form, the Terminator franchise has run its course. The timelines have gotten more confusing and the characters have become even blander — all in service of chasing that high that moviegoers have felt for years for the first two films.

Now those problems have seeped into yet another sequel, Terminator: Dark Fate. Following in the footsteps of last year’s Halloween, Dark Fate is scrapping every Terminator outing after T2, effectively creating a second bookend to the original trilogy and telling us to forget about Rise of the Machines, Salvation, and Genisys altogether. (As a fan of Rise of the Machines, I feel personally attacked and would like a formal apology pronto.) I see it as a new form of fan service, the kind that acknowledges the general displeasure for pieces of a franchise and apologizes for it by giving the fans a product that they are more likely to love (in theory). In the case of both Halloween and Dark Fate, that means going back to basics, channeling the iterations that are generally considered as the best and riffing off of them.

For the Halloween franchise, making a new film that was a direct sequel to the original Halloween (1978) was a smart move. The franchise had become so untenable with so many offshoots and quasi-reboots that it was probably the only way to continue the franchise into the future. It mostly worked, too. Halloween (2018) is never excellent, but it is a worthy entry into the canon. It bypassed all the lore behind Michael Myers for a nuts and bolts story that is solidly thrilling. The success is in the box office receipts as it was a massive success and now Universal and Blumhouse have greenlit two sequels.

The painful irony for Dark Fate is that in its attempt to also go back to basics and to streamline everything, it still has to answer so many questions to make sense of the time travel paradoxes embedded in these movies and to validate its existence, ultimately proving that we are at a point of no return for this franchise.

Dark Fate begins with footage from T2 with Linda Hamilton’s Sarah Connor foreboding Judgement Day and all the terrors that come with it. This doesn’t really serve a purpose, except as to give you a quick reminder that T2 is a really good movie and to hopefully win you over with nostalgia. From there, we get background information through flashback as to where Hamilton’s Connor ended up after T2, which shows yet another Terminator that looks like Arnold Schwarzenegger coming to kill John Connor…and succeeding. (This could have been a very harrowing scene, but I was far too distracted by the unbelievably great de-aging technology used on Schwarzenegger, Hamilton, and even Edward Furlong.)

Dark Fate‘s first thirty minutes are probably its best, as we are introduced to our new characters, Dani (Natalia Reyes), the main protagonist and the new John Connor savior figure, and Grace (the insanely ripped Mackenzie Davis), the enhanced human sent back in time to protect her. Not wasting a beat, the film takes off when a REV-9 series Terminator (a model that is more scary-er and blow up things quicker) played by Gabriel Luna tracks Dani down at a factory in Mexico City. Taking quick action herself, Grace immediately engages with the hostile machine in hand-to-hand combat that is equally coherent and thrilling. Instead of answering Dani’s inevitable “who are you?!?!” and “what’s going on?!?!”, Grace responds by pulling her out of trouble and wonderfully undercutting the trope of protagonists hounding their saviors for information with danger imminent. It’s a great little character moment in a movie that sadly needs many more of them.

A chase on the freeway ensues with the REV-9 destroying cars beyond recognition via a huge dump truck. Eventually, as you’ve seen in the trailers, Sarah Connor gets involved and wreaks havoc herself. The entire sequence pure action insanity, that is until Sarah offers her own blasé rendition of “I’ll be back,” because this is a Terminator movie and we’ve all entered into an unspoken contractual agreement that forces us to hear that line uttered in each sequel. The problem is what follows. You know, the last hour and forty-five minutes. 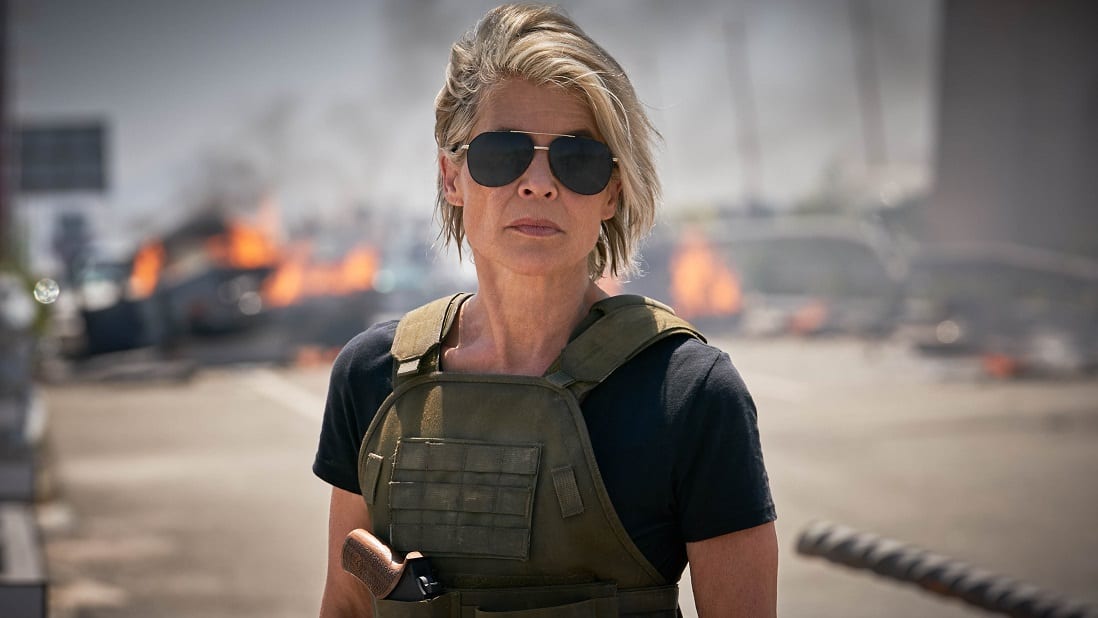 In the days leading to Terminator: Dark Fate‘s release, rumblings began to make their way into the press of production issues, namely Tim Miller and James Cameron butting heads and the set going dark for a few days. Also having three screenwriters along with five people with “story by” credits on your movie is never a great sign, either. Tim Miller is an intelligent enough filmmaker to make a largely understandable movie out of this disorganization. (That’s more than I can say about Terminator: Genisys!) But as the many screenwriters on the project would suggest, Dark Fate lacks a distinctive vision at every turn.

The pummeling mediocrity becomes apparent after Dark Fate dials back the explosions and settles in to offer background, which it does without much personality. Linda Hamilton has one of the few great lines of the film where she notes that all she does is “hunt terminators and drink until [she] passes out.” Grace and Sarah Connor also share a moderately amusing disdain for each other from the moment they meet but doesn’t have much payoff.

Unlike the previous iterations, Terminator: Dark Fate is R-rated. (Curiously, it cost more to make than Genisys despite limiting the number of people that can see it, but that’s an entirely different conversation.) In theory, this is a nice change from the standard, assembly-line feel that has plagued some of the Terminator sequels. Though if you removed a few F-bombs here and there, Dark Fate would probably sneak by as a hard PG-13 movie. It’s vaguely tougher as a whole, but never in a particularly inventive way.

You can see where a more defined film could have used this opportunity to stand for anything except, well, the possibility of successfully rebooting the franchise. In a curious decision, a large portion of Dark Fate is spent near the U.S border, with Grace, Dani, and Sarah getting detained by Customs and Border Patrol while the REV-9 moonlights as a CBP officer. The strangest piece of it is that the film carefully tiptoes around the subject without making any sort of statement, clearly afraid that anything said may alienate audiences. I don’t confide in the Terminator franchise for border policy hot takes, but I wish that this movie would have stood for…anything. Even ideas of fate that it presents are largely lifted from T2, ultimately making Dark Fate a straightforward, bland riff on material that is past its expiration date.

Mackenzie Davis and Natalia Reyes are victims of the lackluster material as well. Especially Reyes, whose character is supposed to be the main protagonist and I can only describe her as a human being. She’s a fairly passive character for the majority of the movie. Davis’ Grace adds an interesting wrinkle as an enhanced human that only fights at increased levels of strength and speed for short periods before her body seizes up and breaks down, though her traits are also vaguely drawn. (Side note: I love Mackenzie Davis and I hope that she finds consistently good material from here on out.) The spotlight is still on Sarah Connor and the T-800. (Or as he’s named in this movie, Carl. Yes, Carl.) They have no more stories to tell. Arnold’s involvement in the film largely dips into spoiler territory, but I can honestly say that is one of the more confounding, silly, and ridiculous backstories you’ll see in this franchise.

At every stage, Terminator: Dark Fate is solidly produced, but the lack of any angle at all leaves much room to criticize the nonsensical time travel mumbo jumbo that each character must explain. Eventually, I became numb to the effects extravaganza that never wants to end. It’s time for Paramount, Skydance, 20th Century Fox (so Disney, because of course they’re involved!), and Tencent Pictures to face the idea that unless they enact some radical changes, the Terminator franchise will always remain broken and tired.

Thank you for reading! What are your thoughts on Terminator: Dark Fate? Comment down below!

[…] In low-budget filmmaking, there’s the constant struggle between its original vision and budgetary limitations. Not everything is possible. Should you aim high or should you aim low? Aiming high means there’s the chance that some of the effects can be laughable, aiming low could mean a lukewarm product. […]

[…] to watch it all go so terribly wrong. Set with a promising cast — Mackenzie Davis (Terminator: Dark Fate), Finn Wolfhard (IT) and Brooklynn Prince (The Florida Project) — the film could have been an […]

Glad we could agree :)