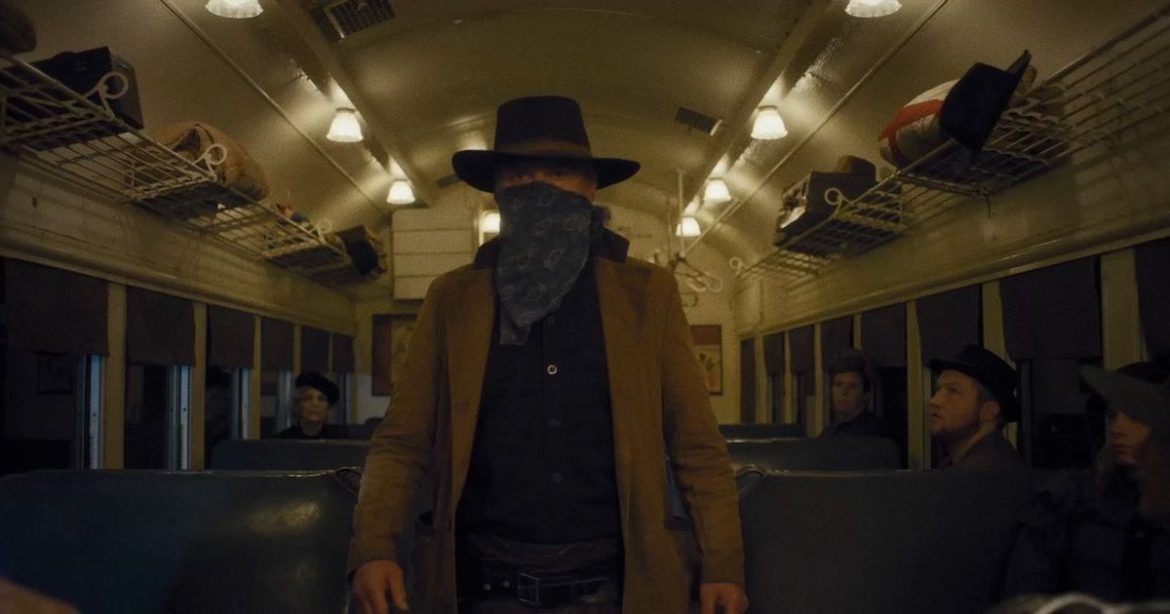 Admittedly, the sole reason I was interested in watching The Pale Door was that Joe R. Lansdale’s name was on the poster. If you’ve never heard of him, stop reading and check out some of his stuff now. He has a wealth of literary outputs, stories pertaining to different genres, including horror, Western, crime, science-fiction, coming-of-age drama. Some of these stories are absurdist pulp, others are genuinely moving. Usually, they are both. These stories can involve a melancholic King Kong, a soul-sucking mummy, zombies with Mickey Mouse ears, and so much more. If that doesn’t make you interested in giving his work a gander, I don’t know what will.

Considering he was born and raised in Texas, it’s no surprise that his stories are usually set in the American South, with all its wondrous and terrifying splendor. One of his stories became the basis for the cult-classic, Bubba Ho-Tep, in which Bruce Campbell plays an aging Elvis, who together with an aging John F. Kennedy (naturally played by the late, great Ossie Davis) must battle against a soul-sucking mummy. Yeah, it’s probably the greatest film ever made.

There’s the deeply underappreciated neo-noir thriller, Cold in July. Then we have Hap and Leonard, an excellent show, based on his series of Lansdale’s series of detective novels, which should have gotten more than three seasons. Joe’s penmanship work goes beyond his literature, as he even had a hand in writing numerous great episodes of Batman: The Animated Series, most notably “Perchance to Dream.”

All this praise notwithstanding, Lansdale’s involvement in The Pale Door is actually relegated to “executive producer”. He isn’t credited as a co-screenwriter, but his son Keith is. The poster states that Joe is ‘presenting’ this film, but it’s nothing more than a marketing ploy. More than likely his name was just there to give the film some clout.

Having said that, the film does have a lot of elements that would make you think it’s based on Joe’s work, from strong characterization and dialogue and the mixture of horror and Western. A pulp sensibility for sure, but not without its heart in the right place.

Somewhere in the Wild West, we have a group of outlaws named The Dalton Gang. Led by Duncan (Zachary Knighton), the gang has become notorious for their vicious bravado. The gang’s number two is Wylie (Pat Healy), who seems to be the brainiest of the bunch. Dodd (Bill Sage) is their most reputable gunslinger and is even handy with a knife.

Duncan’s little brother, Jake (Devin Druid), due to his meekness and kind heart, stands out among the gang. There’s also Lester (Stan Shaw), who due to having saved Duncan and Jake when they were young from a gang of marauding thieves (who in the process also killed their parents), has become a sort of father figure for the two brothers.

Normally Duncan doesn’t involve his little brother in any of the gang’s schemes, but having lost one of their members in a gunfight, they need the extra man for a train heist, which promises to be extremely lucrative for everyone involved.

The train heist initially seems successful, even though the gang is forced to gun down many Pinkerton agents. During the ensuing gunfight, Jake has a chance to gun down one of the agents but is unable to do so. He forces this agent to run away instead. But rather than finding either gold or money inside, they find a trapped woman, Pearl (Natasha Bassett), who claimed to have been kidnapped for unknown reasons.

Unfortunately, Duncan gets shot by the Pinkerton agent whom Jake had a chance to kill earlier but didn’t — and as you can probably understand, Jake becomes wracked with guilt. The wound will no doubt be fatal if Duncan doesn’t receive urgent medical treatment.

Their best option in saving their leader is a nearby brothel. Pearl, having been kidnapped there, shows them the way. When they finally arrive, they receive a warm welcome from the courtesans inside. While Duncan is being tended to, every gang member besides Jake, are led to a private room by the warm hands of the women. Jake is left alone with the madam of the household Maria (Melora Walters), who seems attracted by Jake’s innocent nature. But when Madam gives him a psychic glance of her past, he realizes that none of these women are who they appear to be…

This is Low-Budget Filmmaking

This is without a doubt a low-budget film. The cast features a few familiar faces, but none of them would likely draw a huge commercial audience. The sets are passable. The special-effects waver, some are better than others. Time is always of the essence. The filmmakers had to make the best of it.

In low-budget filmmaking, there’s the constant struggle between its original vision and budgetary limitations. Not everything is possible. Should you aim high or should you aim low? Aiming high means there’s the chance that some of the effects can be laughable, aiming low could mean a lukewarm product.

This should always be in the mind of the viewer. It’s not that you should have low expectations per se, but you shouldn’t expect the same glossiness of a Hollywood blockbuster. In a way, sometimes, a low-budget film, even with its limited scope, can feel more heartfelt in comparison to an assembly line Hollywood product. You know the people struggled during the production. Whenever they hit a problem, they couldn’t just call up the producers for more money.

The best aspect of The Pale Door is the interplay between the characters. A lot of time is spent developing some of these characters. Even if there’s an occasional chunky exposition scene, you do start to care for them.

There’s this real feeling of brotherly love between Duncan and Jake, and a sense of brotherhood in the Dalton Gang. They aren’t good people, as they tend to leave a trail of bodies behind, but they’ve got love for one and other.

All the performances are good. Melora Walters — who should have had a more prolific career after her heartwarming turn in Paul Thomas Anderson’s Magnolia– is naturally excellent as the head madam. Character actors Pat Heally and Bill Sage perform their roles with ease.

The Pale Door also features an excellent score by Alexander Cuervo. The music manages to mix foreboding and a fun, gun-toting Western attitude. Especially during the end, the score even manages to tug just a little at your heartstrings. If you’re not going to see this film, at least give the soundtrack a listen.

Strangely, the worst aspects of The Pale Door are its action and horror elements. Even with the decent gore and make-up effects, all of the action scenes lack that necessary viciousness or excitement.

The first thing that bothered me is the overabundance of digital muzzle flashes whenever the characters shoot their guns. I understand that most films use this effect, but in this case, it doesn’t look very good.

But the worst parts are the stock gun sound effects. The sound is too low, it wouldn’t even scare cats. It might sound like a pitifully minor thing, but it immediately takes you out of the film.

There are also some questionable editing choices. Especially during the third act, when the weirdness really begins to sink in. To pick an example would mean spoiling some plot elements, but just pay attention during the scenes when characters suddenly find themselves in a different place. I understand the reason for these choices, but surely there must have been more effective options to illustrate the mindset of these characters.

If you’re a fan of both Westerns and horror, give The Pale Door a watch. It doesn’t do anything different with either genre but it does manage to blend both nicely.

Even though I’m a little disappointed by the lack of involvement of Lansdale, the script itself does feature enough of his literary quirks that make me think that maybe, just maybe, he had more to do with the script than what’s being credited — or perhaps Keith just inherited enough of the good stuff from his daddy.

The Pale Door is however a commendable example of low-budget filmmaking. It wouldn’t surprise me that the filmmakers in question spent years trying to fund this film. Through it all, even though some of the poor effects or questionable editing decisions, there’s the beating heart of the struggling filmmaker. Any filmmaker in history, from Stanley Kubrick to Ed Wood, would be proud.

Thanks for reading! What are your thoughts on The Pale Door? Comment down below!