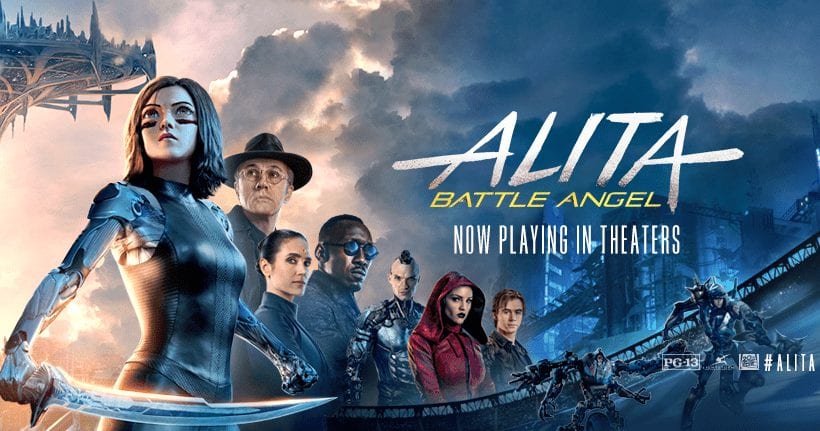 I’ve been quite optimistic about Alita: Battle Angel from the moment the first teaser trailer dropped. There was something about it that felt special and quite cinematic. After the long wait, the movie is finally here and I got uplifting news in the form of a decent flick. Although the movie may not be an instant box-office hit, I’m sure that Alita will pick up steam over time.

In the 26th Century, the world looks a lot different. After the war known as “The Fall”, society changed and the major floating cities perished, all but for one. Most of the poor now live under it, in a place called the Iron City.

It is here that Dr. Dyson Ido (Waltz) builds a cyborg girl from the remaining scraps he found, naming her Alita (Salazar). There’s a lot to her that’s unknown, most of which she doesn’t reconcile. Ultimately, Alita will have to ask herself a question: does she pursue the return to her past or try to fit into what she now knows?

Alita: Battle Angel is based on the manga called Battle Angel Alita, and the film adaptation has lingered in development hell for quite a while. Over time, the biggest supporter of the project had to be James Cameron. At first, he was set to direct the film, but then history took a turn when a certain sci-fi film full of blue people became fairly promising. He had to let others take up his duties while he moved into the role of a producer.

His influence on the film is still present, though. He brought on his visual effects team from Avatar (Weta) when it turned out he had to take a long time to work on the scripts for the four of his planned Avatar sequels (you heard that right).

Even after shooting and post-production, the release of this movie was overly complicated. It went from an original July 2018 release to a December 2018 one. Unfortunately, films such as Aquaman, Mary Poppins Returns, Bumblebee, Spider-Man: Into the Spider-Verse, and Mortal Engines overcrowded the market, leading it to move yet again. 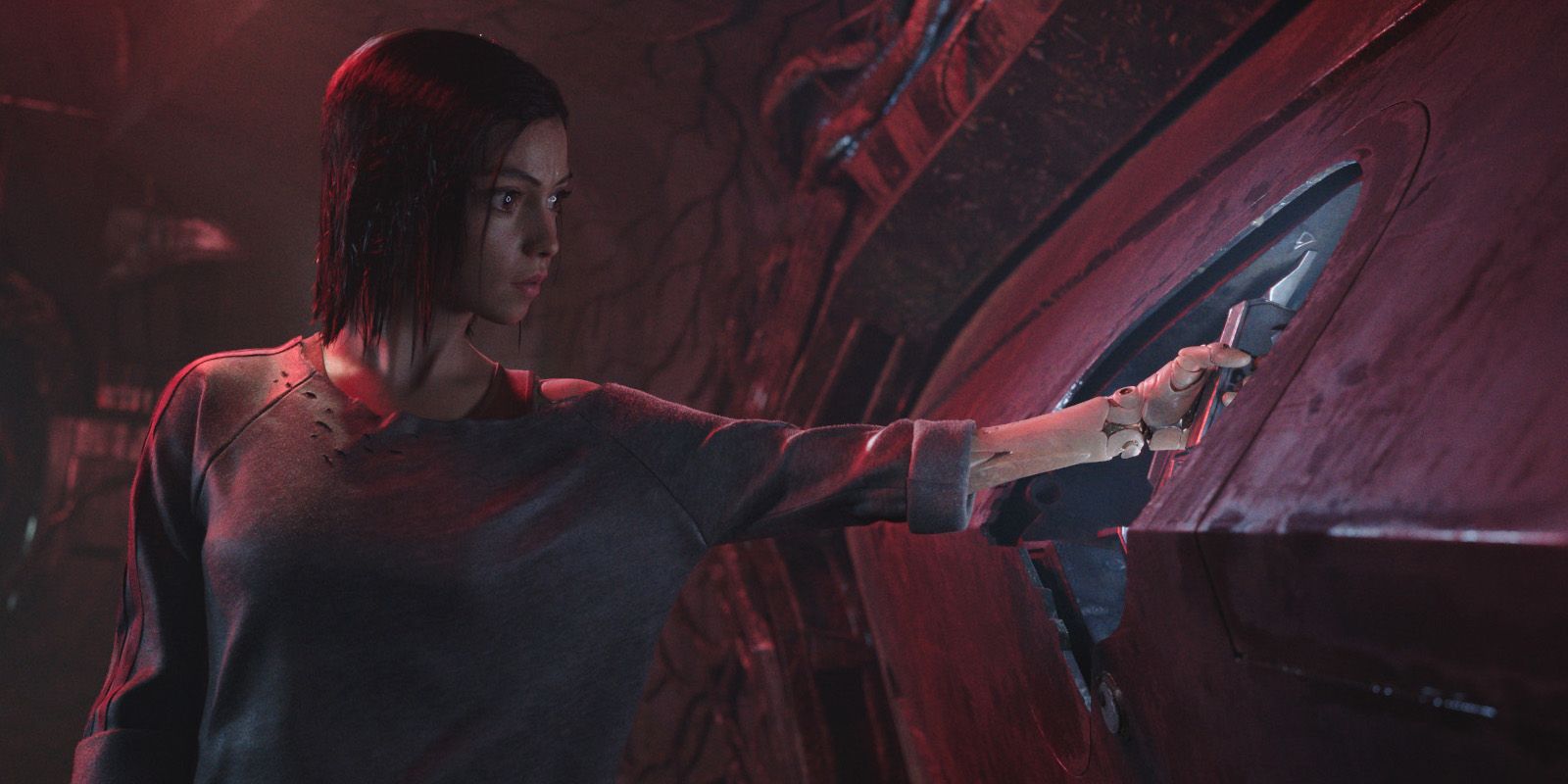 Another factor was Fox’s delay of the Dark Phoenix film to the summer. They likely needed to fill in their February 2019 date with something and Alita just happened to be the perfect candidate. 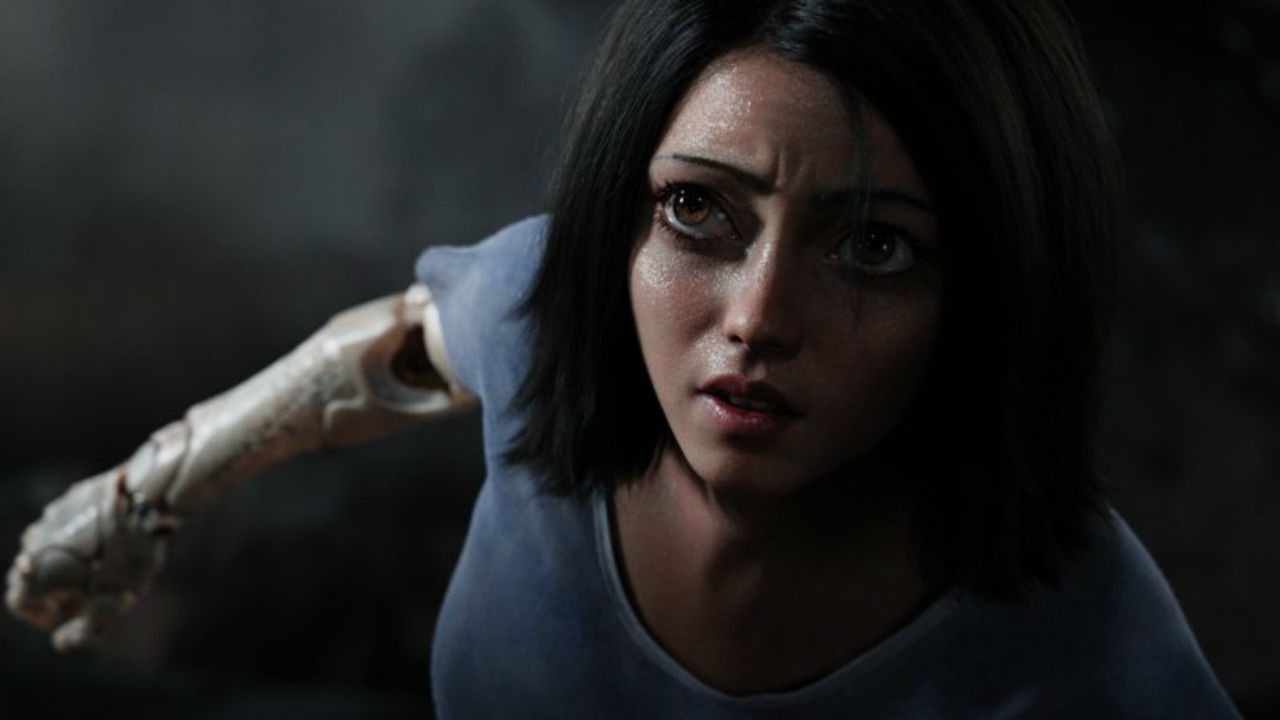 I don’t say what the heading declares only because the property itself took over a decade to develop. Regularly, live-action adaptations of Japanese manga/anime don’t turn out very well. Dragon Ball, Death Note, Bleach, Attack on Titan, Tokyo Ghoul, and Ghost In the Shell are proof of Hollywood’s watered down interpretations. We needed one movie to finally break the mold.

What’s crazy about Alita is it feels a lot like your typical anime with a major focus on action, with chunks of the American influence that’s often seen as the enemy of these adaptations. Westernizing Japanese influences in film isn’t the problem, as long as there’s a firm direction.

One of the unexpected choices present in the film was giving its main character the big, signature anime eyes. In concept, it seems like the worst idea imaginable. Animation and live-action are two very different realms. Not everything that’s in animation will translate into live-action. But what the filmmakers did here was very clever.

They took one element from animation/drawing and gave it a different design intention in a style that resembles the real world. Alita’s eyes are big, and their purpose isn’t to give more expression, but make her aesthetically stand out from everyone else. It’s a risky idea, yet works out to the film’s favor.

From a Drop of Sweat to the Scope of a City

That’s where the visual effects team deserves a round of applause. Understandably, it takes a minute to get accustomed to Alita’s face, as is the case with every untested visual idea. It’s a testament to their work that something so easy to screw up doesn’t distract from the rest of the film.

Weta put a lot of heart and soul into making Alita appear and move tangible within the real world, and their work goes far beyond just one character. Battle Angel is filled to the brim with unforgettable and awe-inducing visuals. The major city landscapes and structures create a beautiful canvas.  Anima/manga adaptations finally have a raised bar to aim for. It might be a bit too early to say it, but it has solid chances for a Best Visual Effects nomination.

Alita is a Gem of a Character Alita is a little naive, she doesn’t know much since she’s cursed with the stereotypical plot device of a wiped memory. The memory blurs aren’t defined and their rules fluctuate, which is why it’s important to know they’re never her defining trait. And even with all of that Alita is a joy to watch.

She is fierce, badass, strong, and has a desire to discover new things. In a way, Alita is a child who’s rediscovering the world for the first time, and, because of that, her willingness to strive for greatness appears to have no limits. Like in typical anime fashion, Alita never gives up in the presence of unfavorable odds.

The most endearing pieces are watching her interact with the people she cares about. She plays opposite top-notch actors like Christoph Waltz, Mahershala Ali and Jennifer Connelly, and although underutilized in some aspects, they do leave a substantial effect on Alita’s purpose and add reasoning to her motivations.

But her strengths and potential peak during the action. Just the character’s combat-ready stance lets you know that she means business. Not only are the choreographed sequences fun, imaginative, kinetic, and offer great use of slow-motion, they also give all the insight one needs into understanding Alita’s personality. As unremorseful or ruthless she may be, the character is understanding and unafraid to show her human emotions. It’s moments like these that give me the urge to reach for the source material.

There’s a component missing in Alita: Battle Angel that makes it incomplete. Though much potential of the source material is realized, much of it isn’t, predominately in the film’s plot structure.

Instead of elevating itself to the next story beat, it repeats. Alita’s relationship with Hugo creates the same scenario twice; Dr. Ido serves a rinse and repeat purpose throughout; and certain solutions brush by the inconveniences to these characters’ problems. Though I do like a good chunk of what’s happening and where it ends up going. I quite enjoyed Hugo and Dr. Ido, but they aren’t fully realized for those reasons previously stated.

Still, some scenes could be rearranged to suit a stronger narrative purpose, others could use an alternative take for a more natural flow. The story needed to find a more dynamic storytelling approach to solidify itself. Maybe give Alita more of a moral compass, maybe have the supporting characters question her existence, or flesh out the main antagonist. Utilizing these suggestions would have helped the film feel less like part one of a story.

Alita: Battle Angel goes beyond its redefining visual effects. There’s heart, action, edge, and a call for an adventure all expressed through Alita. She’s a heroine who brings forth the spectacle and the emotional heart tugs. Simply put, the movie does a great job of making you care for its title character.

It’s just a matter of cleaning up the narrative into something a bit tighter and more cohesive. If possible continuations of this story can fix this issue, we’ll be on to something pretty great.

Thank you for reading! What are your thoughts on Alita: Battle Angel? Comment down below!

[…] third installment in the To All The Boys canon follows Lara Jean (Lana Condor) and Peter (Noah Centineo) as they prepare for their post-high school future at Stanford together. […]

[…] I mention it looks terrific? Rodriguez’s bug-eyed, confrontational style has amped up to nearly insufferable levels in recent years. But here, thankfully, the “one-man […]

[…] I mean, why? Their name is all over the film, and the bad guys are all on their team! Seems like a risky business move to me, but I was a film major so what do I […]

[…] story of Lara Jean Covey (Lana Condor), a teen who had written love letters to her crushes as a private exercise, and the fallout when […]

Nice review! I’m going to see this tomorrow and really hope that it delivers.

I was pleasantly surprised. A little unsatisfied with the ending, but overall I liked it a lot more than I thought I would.

Just saw it yesterday. Undeniably enjoyable film, but I completely agree the story-telling was flat in places and could have been full with just a bit more effort. I was especially disappointed in how cardboard the antagonists were and how they missed the opportunity to make the conflicted nature and experience of Jennifer Connelley’s character live for us. Her story arc was like a black & white flip card instead of a story, and it would have changed a ton for me if that aspect had been played out well from beginning to end.
Fortunately Alita herself is absolutely captivating and there’s enough story to keep it threaded together. I will go see the next one, but I hope they’ll put the attention into the story telling that the level of effects effort deserves.

Exactly. I’m really captivated by what this world offers and I hope to see a sequel!